Through the looking glass with ambient pioneer Midori Takada

The composer and artist behind cult minimalist adventure Through The Looking Glass, Midori Takada opens up about her influences, from Steve Reich and Brian Eno to traditional African and Asian music.

With the Japanese music industry finally opening up long-closed doors, the last few years has seen a slew of long sought after reissues. None however have been as feverishly anticipated as percussionist Midori Takada’s ambient minimalist masterpiece Through The Looking Glass. Originally released in 1983 by RCA Japan, and given new life by WRWTFWW / Palto Flats, its four-song suite of evocative, pan-global, dreamscapes shares similarities with western contemporaries such as Steve Reich and Jon Hassell yet is invested with Takada’s own starkly original, dreamlike and meditative qualities. Largely ignored on its release, the album built up a reputation as a holy grail of Japanese music over the years, with prices reaching up to $750 for a copy.

Still very much active today, Takada’s career has typified the questing spirit that defines her masterpiece. She began within the realms of classical music, making her debut in 1978 at the Berlin Philharmonic for the Berlin RIAS Symphonie Orchestra after graduating from Tokyo University Of The Arts. Early disillusionment led to a change in direction. Seeking less overtly emotive forms more conducive to her desire to create a spiritually centred music, she began to study traditional African and Asian styles. She formed Mkwaju Ensemble alongside fellow percussionists Yoji Sadanari and Junko Arase. Their two 1981 albums, Mkwaju and Ki-Motion, delivered a hypnotic, purely percussive sound that synthesised the rhythms of Africa and Asia with those of western minimalism. By turns sparse and riotously danceable, both have become highly collectable in their own right.

The financial constraints of running an ensemble proved unsustainable however, and Mkwaju were disbanded as Takada sought a career as a solo musician. Entering the Aoyama studio in Tokyo on the tightest of budgets and with only an engineer for company, the self-produced Through The Looking Glass was recorded onto analogue tape in just two days using a dizzyingly diverse array of instruments, including marimbas, gongs, chimes, recorders, a reed organ and Coca-Cola bottles which were blown into and played like flutes. In an effort to create music that embodied what she termed “the notion of time and body, of physicality”, she carefully measured the distance between the microphone and each instrument to generate a three-dimensional sound sculpture. Lacking technical knowledge, she relied on a spirit of creative improvisation to facilitate the recording, correcting mistakes with multiple layers of overdub, a process which resulted in its unique sound.

Marketed as a contemporary classical album, it struggled to find an audience on release and Takada subsequently embarked on a wildly diverse career that has taken in a number of disciplines. She composed and performed live music for theatre, scored film, anime and game soundtracks, and is part of the free jazz band Ton-Klami. There were two more releases under Takada’s own name; 1990’s Lunar Cruise, a collaboration with legendary jazz pianist and composer Masahiko Satoh, and the 1999 solo outing Tree Of Life. Both releases continued the pan-global rhythmic path begun with Mkwaju Ensemble.

I met Midori Takada in London at the end of a successful European tour in promotion of 2017’s Through The Looking Glass reissue. The previous night at a sold-out Café Oto had witnessed a mesmerising percussive performance by her that was by turns serene, ceremonial, theatrical, poetic, and thunderously loud. Elegantly dressed in modernist Tokyo style, she was humble and friendly in person. Deep thinking and strongly opinionated on the subject of music, she has an encyclopaedic knowledge garnered through a lifetime of exploration and study. We spoke in English and in Japanese through an interpreter. 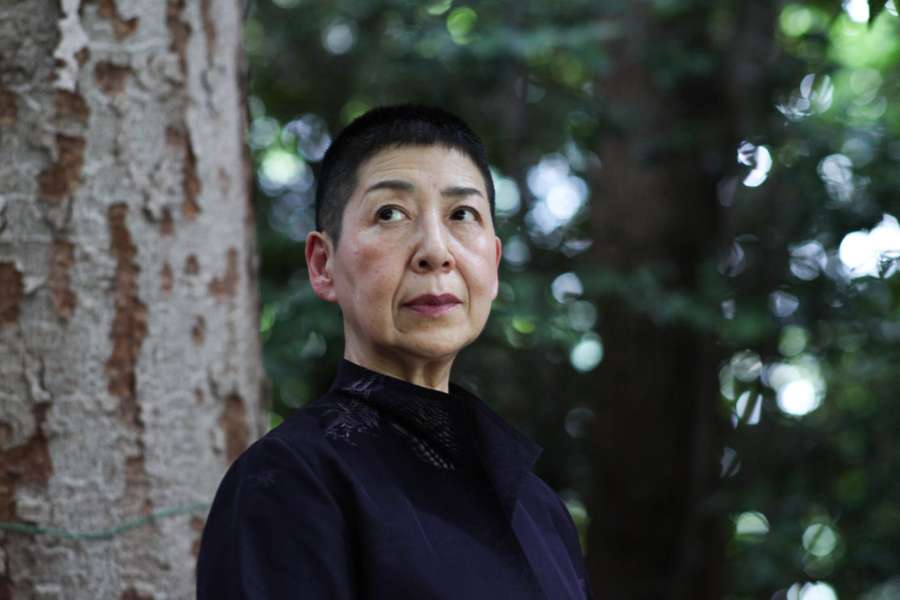 How does it feel to have your works appreciated by a modern audience so long after you first recorded them?

I think it’s amazing that young people are listening to an album I made 34 years ago. It’s something I really appreciate. All these years later I now realise why I made it.

In retrospect, the early ’80s seem like the beginning of a golden age for Japanese ambient and minimalist music with classics by you and by contemporaries such as Satoshi Ashikawa, Inoyama Land and Hiroshi Yoshimura released in a short space of time. Did you feel part of a movement or part of something special?

I didn’t feel part of a mainstream movement. There were a few composers influenced by people like Steve Reich, Terry Riley and Brian Eno. It was a time of change though there were very few people involved and we all knew each other. I played vibraphone on Satoshi Ashikawa’s Still Way for example. But it wasn’t just a music scene, it was multi-media including fine arts, architecture, and minimal dance.

You started off within the realms of western classical music. What were your reasons for switching to minimalism?

I first realised I needed to find my own music when I had my debut concert with the Berlin Philharmonic. At that moment I realised ‘I can’t be here’: playing in an established concert hall felt wrong. I felt I wanted to be playing music on the street. Later I discovered Asian and African music. It was from such a rich and non-materialist culture. It’s music that denies the materialistic.

You then studied with traditional African and Asian musicians such as Ghanaian kogyil (xylophone) player Kakraba Lobi, and Korean kayagum (zither) player Chi Soung-Ja. What did you learn from them and how did their teachings affect your music?

I studied African music by myself at first, because there was no information in Japan about African music. I copied from field recordings on labels like Nonesuch and tried to write scores and rhythms, and I would study the construction of rhythms. I then met Kakraba Lobi in Tokyo, and went to Ghana to play with him. I learned to play with him and learned his theories which gave me confidence about playing African rhythm. Not traditionally but using my own style using African constructions and theories and using Western not African instruments.

How about Western figures? You’ve said that Steve Reich was a major influence. Were there any other key figures in shaping your sound?

Yes, Through The Looking Glass is primarily my own interpretation of Asian rhythms. The exception was on ‘Crossing’, where the rhythms were inspired by the sound of Japanese train crossings.

Mkwaju Ensemble seems more dance-orientated to me. There are textures and beats that resemble techno…

There were no techno influences. People sometimes make that mistake because of the involvement of Hideki Matsutake [prolific computer programmer known for his work with proto-techno outfit Logic System and Yellow Magic Orchestra]. Everything was either from African repetition or from minimalism. How the act of producing music changes your body – that’s what fascinates me. If you use a machine that process won’t happen so I don’t use any machines in my work. The only time I’ve ever used a machine was to record and pick up brain waves and muscle electricity through the synthesiser to make alpha waves. I’m fascinated by how to control your body, not only the outside but the inside as well. I used to do cybernetics, using brain waves and the body. I would use the recorder to pick up blood circulation and make it into sound. Sometimes I would even use a machine with a probe microphone that you would normally use to check the sound of a pregnant woman’s blood circulation and her unborn child’s heartbeat, rhythm and tempo. I used this machine to amplify my own heartbeat and blood circulation on stage with Masahiko Satoh playing piano during a live performance. He hated it!

You’ve spoken of your desire to produce music without emotion. Do you feel that minimalism suits the Japanese sensibility?

Well, minimalism was a term that started to be used in the 1960s for fine arts. Japanese tradition doesn’t deny emotion on frown upon emotion. Traditional musicians would put all their emotion into one sound. In that sense minimalism already existed in Japanese music.

Through The Looking Glass is an incredibly evocative, almost dreamlike listening experience. Was that the effect you were hoping for?

I certainly didn’t mean to create dreamlike music, maybe it was there subconsciously but that wasn’t what I was looking to achieve at the time. I wanted to make a perspective of sound. It was an analogue recording so I placed microphones in many different places. I tried to create a three dimensional music by controlling the distance of the microphone to create a perspective. As a result it ended up hypnotic or dreamlike as people say.

You’ve had an incredibly diverse career. Has there been a constant theme or guiding principle? What keeps you exploring and searching?

Like everyone I needed to work to provide. But there is definitely something that has kept me searching and continues to do so.

With thanks to Ken Hidaka

This article was originally published in May 2017.