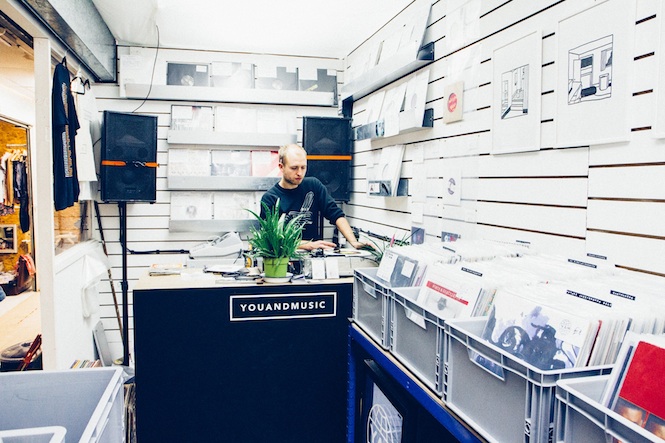 Bradley Zero’s Rhythm Section began three years ago in the Pool Hall on Peckham’s Rye Lane — a vinyl-only party bringing together local DJs and global guests. It’s since expanded to a record label, Rhythm Section International, with releases to date from local resident Al Dobson Jr., and Prequel, who lives on the other side of the planet.

What was the idea behind setting up Rhythm Section as a vinyl-only party?

It was half to do with the fact that I only had two technics, and no budget to hire CDJs. And it was half to do with the idea of separating the DJs who meant it from the DJs who would just fill their hard drive with the latest tunes and wing it. You have to invest a certain amount of time and money and energy into having enough records to express yourself. You can do that digitally as well — and I’m not a purist — but starting out a night, it’s a good way of reducing all these requests from people wanting to play down to just the people who are really equipped and involved and committed. If there was a booking policy it was to not rely on big names to get people in. So from the start it was always locals and friends playing. It was like a social club – bringing all your records, getting them all out, having a good natter over who’s got what and then hanging out. Finding people who are friendly and nice, and who I want to hang out with for a weekend. Who I want to have dinner with and then do the party and then they crash at mine and we go out the next day record shopping or going to see some sights. It should be fun, and you should have a good bond with the people you’re playing with. Would you say that personality is the most important thing at Rhythm Section?

There’s definitely a correlation between how nice you are and how good a DJ you are. Because it’s not that hard to mix two records. Most people can do it. And it’s not that hard to have all the classics, or the new hot shit. What it comes down to essentially is bringing a vibe, outside of the music. So the personality of anyone who plays records is just as important as the records themselves. And one person could play the same record in the same club and have half the effect. It’s these really subtle things that people don’t really take into account: the way you stand, the way you hold yourself, the way you move, the way you look, the way you listen, the way you bring it in, the way you bring it out. All very simple things, but some people do it better than others. If you turn up with a smile then you’re going to make other people smile. The music is very important, but the energy is equally important. Guys like the Beautiful Swimmers and Ruf Dug — any number of people, but those guys especially — they just bring a vibe that no one else can bring. You can’t learn that. How important is the community to the party?

Community is really everything. I grew up in a field in the middle of nowhere and then bounced around North London as a UCL student, so Peckham was really my first taste of community. At it’s worst it’s like a real-life, never-ending episode of Hollyoaks, but at the best it’s a powerful movement, a really strong alliance of like-minded creative people.

Is that subject to the tensions of a regenerating South-East London?

In terms of the bubble bursting, I like to quote my friend Dimitri Launder, founder of Area 10, the now-bulldozed Peckham institute of the arts: “Foam is liminal. Bubbles burst. Cultural Bubbles are short-lived because they are not built with creativity at their core, but rather economy or hype. Cultural foam develops over time, with experimentation and many creative acts. Foam is the future.” Change is good, and it’s inevitable, but let it be gradual and let it be for the people, not faraway pockets of big business and investment. Positive, gradual change over brutal, council-led, corporation-backed cleansing masked as ‘Regeneration’.

I was really interested to find out that this current struggle is not a new one – Eileen Conn [local community activist and founder of Peckham Vision] has been fighting against many a ridiculous plan from Southwark Council since the 60s. In the 70s, Eileen was involved in a protest as part of the Peckham Action Group, to resist the rebuilding of Southwark town hall. In fact, as part of the protest, a local punk band made this amazing 7” record called ‘No Town Hall’. I got hold of a copy. Interesting fact: the address on the label is Nutbrook Street, still Eileen’s house, and it’s one road over from mine, which is the address on the Rhythm Section International label.