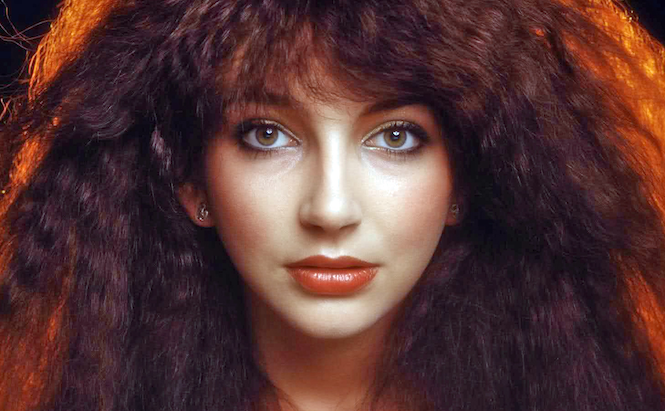 Aged 19, Kate Bush topped the charts with her Brontë-inspired debut single ‘Wuthering Heights’, the first UK number one written by a woman. In a career spanning 10 albums and four decades, Kate Bush would continue along the path of success to become one of the most popular British musicians. And yet she’s also gone down as one of music’s most daring and artistic story tellers. It’s no surprise then her recent comeback to stage brought the world to fever pitch.

Now that the furore surrounding the music event of 2014 – Kate Bush’s return to stage performance after 35 years – has died down, what of her music?

And how do you pick ten songs to represent the wild, wiley world of Bush without creating a huge drama among fans, and feeling a sense of loss yourself in leaving out countless contenders (abandoning ‘The Man With The Child In His Eyes’ almost feels cruel)?

One track from each of her ten albums at least introduces a sense of damage limitation. Out on the wiley, windy moors, Bush launched a phenomenon. It’s rare to find a song with no antecedents  – in fact, nothing still does compare to this freakish, untamed, daring, hallucinatory performance – and this from a teenager, and a debut single, which became the first UK number one written by a woman. Bush was 18 when she caught the end of a BBC adaption of Emily Brontë’s only novel Wuthering Heights; only then did she read the Victorian melodrama and immerse herself in tortured heroine Cathy, who she brought to life in a songwriting session at midnight, under a full moon.

Bush once said her own ‘bolt out of the blue’ musical experience was David Bowie’s ‘Starman’, which makes sense, as both she and Bowie were trained by mime expert Lindsay Kemp, and both songs are theatrical dramas at heart, while Ian Bairnson’s luminous guitar coda for ‘Wuthering Heights’ closely mirrors the tone of Bowie lieutenant Mick Ronson, while drummer Stuart Elliott was formerly of glam dandies Cockney Rebel. So think of ‘Wuthering Heights’ as a post-glam rococo masterpiece, a one-off diamond in 1978’s rough.

2nd in command: ‘The Man With The Child In His Eyes’ In them olden days, artists would release albums yearly; in 1978, Bush released two, encouraged by EMI to capitalise on her instant success. At least she had songs (having been songwriting for seven years, since she was 13) but knowing with hindsight her painstaking approach to recording, it’s no wonder she felt rushed. On top, Lionheart lacked the shock of the new, but it’s got some classics.

‘Wow’ was a single too, a more straightforward containment of her lavish tendencies, with one of her most euphoric choruses, topped by a falsetto squeal – perfect for a song about the art of awe, no matter how ironic the use, given the song’s dissection of artistic vanity and insecurity, of those who put themselves on the line with potential disaster: “we’re all alone on the stage tonight.” Bush’s only tour (1979) before 2015 bore out her own fears, though the lyric is specific about actors – and there’s an astonishing moment (barely commented on at the time; it would be all over the news now) in the video when, after singing “He’ll never make the screen, he’ll never make The Sweeney / Be that movie queen / He’s too busy hitting the Vaseline” and pats her bum knowingly.

2nd in command: ‘Kashka from Baghdad’ Bush’s third album felt scaled down and more personal (she’d started to take charge, with co-production credit and her own management team), none more so than this delicate, sober anti-war paean that was, unbelievably (wow!) Never For Ever’s third single. The waltzing time signature, harpsichord and string quartet feels like ‘yesteryear’, reinforced by the chorus’ male harmonies, like ghosts of soldiers summoned to express the senseless loss of young lives: “Our little army boy Is coming home from B.F.P.O* / I’ve a bunch of purple flowers / To decorate a mammy’s hero”. Bush’s list of jobs that these lost souls could have been, if only they’d had access to education and opportunities, is the narrative’s tragic realization, with sampled rifle-cocks a subtle aural detail rather than guns blazing and the like.

2nd in command: ‘Get Out Of My House’ Bush later described The Dreaming as, “my ‘She’s gone mad’ album.” That was more about public perception than hers, though musically she went for broke, having discovered the Fairlight’s sampling technology and upping the synth element to create vibrant new landscapes. While The Dreaming itself referred to Aboriginal culture, ‘Pull Out The Pin’ was inspired by a documentary about the Vietnam war, but from the Viet Cong perspective: it wasn’t Bush that had gone mad, but the world.

Oriental textures are underplayed rather than gratuitous; maybe she’d enjoyed Japan’s Gentlemen Take Polaroids album (1980), though the spare, haunted mood is probably more indebted to Peter Gabriel, whose third album (also 1980) featured Bush on backing vocals (six years before their duet on Gabriel’s ‘Don’t Give Up’). There was still room for ‘rock’, with angular guitar stabs a much sharper presence than among Bush’s previous work, with flurries of helicopter blades toward the end following Bush’s despairing mantra of “I love life!” This is a slight cheat, as ‘Running Up That Hill’ is the obvious brilliant example from Bush’s arguably greatest album. It’s the combination of emotional tension and new rhythmic advances that make Hounds Of Love stand out, and in the case of ‘Running..’, it married an irresistible urgent momentum with a vague gospel feel, a nagging three-note Fairlight melody behind Bush’s impassioned “deal with God”, and a lyric that proposes a gender-swop (or rather, gender-fusion) to enable man and woman-kind to better understand each other and make this world a better place to live.

But I have to also single out a favourite Bush track, the brief opening strand of the album’s side-long concept suite The Ninth Wave. ‘And Dream Of Sheep’ is one of her most exquisite and perfect miniatures, a simple, stark moment of calm preceding the madcap wave-tossing drama. In her head, she hears the shipping forecast (“Bell Rock, Tiree, Cromaty” sampled from the BBC), seagull cries dot the sky above while bouzouki and whistle add a nautical air. The Sensual World had a pronounced female perspective (as opposed to Hounds Of Love’s, “big drum sounds, very male-energy sounds”), brought to life by hair-raising vocals from Bulgarian vocal ensemble Trio Bulgarka. Yet there was room still room for male viewpoints, such as ‘This Woman’s Work’. It’s hard to believe this piano ballad was written to order for John Hughes’ film She’s Having a Baby, but then Bush clearly empathised with the ‘childbirth crisis’ storyline, less by her own pregnancy (still nine years away) than her mother Hannah’s fresh cancer diagnosis. Yet the lyric is from the expectant father’s perspective, unable to intervene (as in the case of cancer too).

Bush’s voice – cooing like a lullaby to begin with, rising with a sense of panic – has arguable never sounded so simultaneously anguished and ecstatic, lightly buoyed by slow peals of piano. She surgically removed the Synclavier parts on her ‘revamp’ project Director’s Cut 25 years later, though they were hardly obtrusive to begin with, leaving acres of space for this most tender, yet brutal, of Bush dramas. Maybe it’s because she trained in mime, but Bush generally eschewed prosaic confessionals for more literary, and filmic, settings. The Red Shoes was the 1948 film, itself inspired by Hans Christian Andersen’s fairy tale, about a female dancer driven to obsession. In this heart-shredding elegy, “to those we love, to those who will survive”, Bush reprises her most constant theme of loss.

Her absent cast spans the famous (Douglas Fairbanks Jr) and her family (Bush’s mother) to friends the Googleable (Teddy is Abbey Road engineer John Barratt, Michael is Red Shoes co-director Powell) and those only she might know (Bubba). It’s another of Bush’s plaintive piano ballads, but with deluxe orchestral icing – again Bush removed it on Director’s Cut, replacing it with a hushed choir, and a new vocal that is also more reserved – I’d stick with the original. Bush disappeared after The Red Shoes, to raise her son Bertie, and presumably take stock of her life and what she had left (she’s abandoned performing, and had recorded plenty). 12 years later Aerial was noticeably free of the old diehards of theatricality and loss, feeling more like a grown-up immersion in nature. After being away so long, Bush had enough songs for her first double album at (just) over 80 minutes, split between A Sea Of Honey and A Sky Of Honey discs. With 16 tracks to choose from, there’s more room to pick the ‘wrong’ highlight, and no doubt ‘A Coral Room’ and the title track have unswerving acolytes.

But ‘Joanni’ is one of her least celebrated songs, again erring on the modest side in construction. And having said it’s an album about nature’s impact, ‘Joanni’ returns to the idea of war, with feminist icon Joan Or Arc in the ‘title’ role. There’s no great lyrical pay-off or political point, to this scenario ; it’s more the music’s stealthy mid-tempo path, slowly assembling a patina of pale quasi-funk with the returning “angelic” (her words) Bulgarian voices adding spiritual heft before Bush’s almost animalistic moan under a whispered vocal coda. Bush also loved ‘Joanni’ – she performed it live last year.

2nd in command: a tie between ‘Nocturne’ and ‘Aerial’ ‘Flower Of The Mountain’
from Director’s Cut
(Fish People, 2011)

When Bush announced her album of revisions drawing from The Sensual World and The Red Shoes, the problem was less the concept than the fact she’d only released one new album in 18 years. She’d had the urge to tinker before, sprucing up ‘Wuthering Heights’ for 1986 compilation The Whole Story, but this went much further; all vocals and drums were re-recorded while, if such a word existed, her overall execution was to ‘de-Eighties’ the originals.

Goodbye, then, to gated drums, Casio pre-sets, Synclavier/Fairlight washes of sound; hello, a softer, golden glow. It especially benefited the title song of ‘The Sensual World’, now re-titled ‘Flower of the Mountain’ since Bush finally had permission from the estate of author James Joyce to use Molly Bloom’s soliloquy from his novel Ulysses as she’d originally intended. Sitting in this lush, lyrical stream of sensual bliss, Bush sounds in great voice – richer, bolder, brighter, wiser – though Director’s Cut would have been a strange swansong to her recording career.

2nd in command: ‘The Red Shoes’ ‘Snowed In At Wheeler Street’
from Fifty Words For Snow
(Fish People, 2011)

Six months after Director’s Cut, Bush fans could rejoice again. After 16 tracks for Aerial, Fifty Words For Snow presented just seven. No track ran under six minutes, and two went over 11. After Aerial’s summer-into autumn mood, Fifty Words For Snow plunged into winter, though her 2015 stage show proved it wasn’t emblematic of a personal crisis, and musically it continued Aerial’s drifting tendencies and lack of concern for pop structures. (Maybe she felt that was unbecoming for a mother; that said, a lusty love song to a snowman in ‘Misty’ might not have been to Bertie’s liking either).

Among the wealth of snow-soft beauty to sink into, nothing obvious rises above for me. Is it the lengthy 13-minute simmering of ‘Misty’? The title track’s jazzy climes that suggest Bush was aware of Laura Nyro’s incredible 1970 album Christmas And The Beads Of Sweat? Right now, I’m gunning for ‘Snowed In At Wheeler Street’ where grande dame (and early Bush inspiration) Elton John and Bush play divided lovers. The climax – the pair entwining and repeating “I don’t want to lose you.. again” over dark piano ruffles – raises the volume and temperature for a change. Despite it being four years since the album, you feel there’s still more to come. 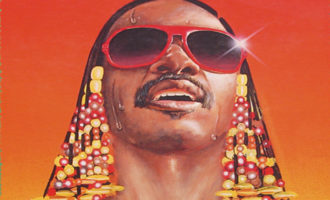 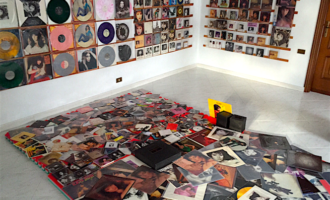 Is this the world’s most dedicated Kate Bush collector? 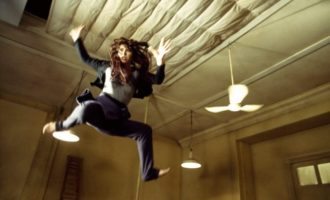