With news that tapes are in fact not dead, Jason Kennedy rounds up the best cassette players for home listening and advises on what to look out for when buying vintage.

Tape decks or recorders are becoming increasingly popular as an alternative form of analogue source following the rather unexpected cassette comeback. The format is particularly popular in the experimental electronic field but also chart-topping releases are finding their way on to tape again.

Today very few tape decks are still being made, in fact in our search we couldn’t find any non portable types on the market. However, as cassette was a massively popular format up until the late nineties there are plenty available second hand and often for giveaway prices.

Inevitably the most popular market place is eBay but there are quite a few on Gumtree and Preloved as well where the prices are a little better. A few used hi-fi retailers stock tape decks too, prices will be higher but should come with some guarantee which is useful which older models.

When buying a used tape deck it’s worth bearing in mind that they are complex mechanical devices and that the older they are the more likely they are to have problems. While there is a lot to be said for buying newer models, that is those that are from the late Eighties onwards, many of the earlier or vintage models can be good if they have been looked after. If you can listen to a tape deck before you buy it do so, and if you can’t make sure there is the option to return it if there’s a problem. Some may recall the mangled mess that a faulty tape deck can make out of a cassette, that’s obviously something to avoid.

On the whole cassette decks were made in Japan where the standard of engineering is very high, this is why so many vintage models are still in use, and if the price is right it can be worth getting a tape deck repaired. I visited a hi-fi show in Warsaw recently and discovered that they still use tape recorders from the seventies and had a beautiful wall of the things on display. If you can find a good servicing company most models can be kept running. Below are a few of the better models that are available second hand, happy hunting.

Now primarily associated with electronic instruments Akai was once a tape specialist with a large range of models including reel to reels. The DX-57 is an early nineties model with three heads, full size headphone jack and the option to adjust bias for different tape types. It also has the distinction of beating the highly regarded Sony WM-DC6 Walkman Pro in a What Hi-Fi test back in the day

Denon is still a player in the audio business, with a range of stereo and surround amplifiers that are generally good quality. The DR-M24HX was made between 1988 and 87 and is highly regarded among tape ‘heads’. It has three heads, a full manual calibration feature and a stable drive mechanism. It offers both Dolby B and C for hiss free recordings and you can buy new drive belts should they be necessary.

One of Denon’s later models the DRS-810 mimicked the look of CD players to make it appeal to digital happy punters. A drawer loading mechanism meant that tape lies flat rather being exposed behind a door. It has the luxury of remote control although these aren’t always available as they controlled other Denon components. It offers Dolby B, C and HX Pro with bias adjust although the latter is ergonomically challenged, see fiddly.

A well regarded deck from 1993 the JVC TD-V662 doesn’t need fancy chrome or metal tapes to make great recordings, it sounds sweet with basic ferric tapes which is good news if you want to play prerecorded cassettes. It looks great with its central tape bay and has all the bells and whistles including a CD direct input for recording purposes, Dolby B, C and HX Pro and like most of its ilk a quarter inch headphone socket. JVC was once a major player in the audio visual world and continues to make headphones, camcorders and boomboxes. This tape deck has the potential to sound better than most of those.

Pioneer Japan have a legendary reputation for build quality and occasionally they turned out products that sounded great too, such was the CT-S740S. Built in the mid nineties its reputation suggests that it competed with well regarded models from Nakamichi, the brand to beat in cassette decks. Features include Dolby S, that company’s last bid to rid tape of noise and one of its most successful. As a result of its cult status this Pioneer doesn’t come up so often but it’s worth looking out for.

Not all of Sony’s full size cassette decks have a great reputation but the TC-K611S from 1994 was one of the stand outs. It needs higher quality chrome or metal tape for best results and that might make it less of a good buy if you just plan to play pre-recorded tapes, but for home recorders it’s a solid three head deck with Dolby S and the potential for remote operation if you have the handset.

An eighties deck from a brand that continues to produce decent separates albeit at a price. Made in Japan the KX-300 has an amorphous tape head that’s reputed to give excellent sound quality. Its vintage means that a drive belt or two may need replacing but these are still available at reasonable prices. A relatively simple two head design with the usual noise reduction systems and a remote control, this Yamaha has an auto tape tuning system to make the best of different tape types when recording.

Nakamichi has a serious reputation when it comes to tape decks, they built arguably the best sounding models ever made, and many lamented the day that CD killed them off. The BX-125E was one of the more modest examples but has a good reputation for sound quality. The styling is pretty cool too, check out the level sliders on the right. Feature wise this is on a par with other decks at the price but what you can’t see is that most cassette decks sound fairly humdrum, Nakamichis sound inspiring. 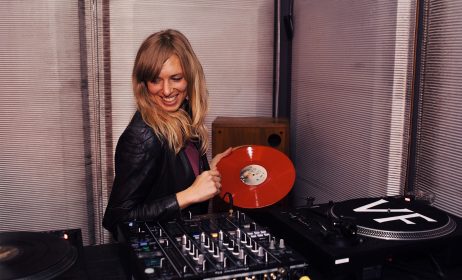