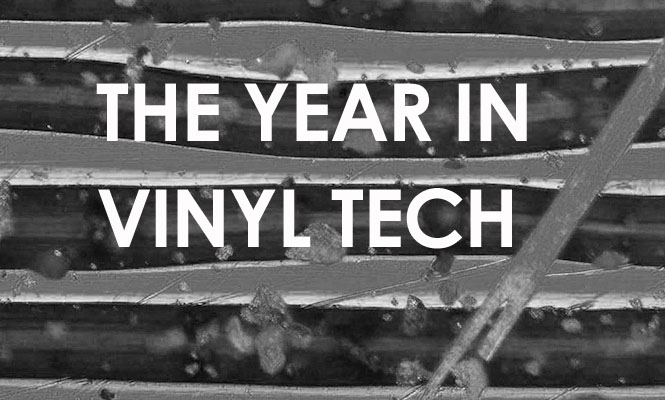 From the return of the Technics turntable to the first new record presses in 30 years, 2015 has been a big year for the record and the record player. Our resident audiophile Paul Rigby takes stock of the year in vinyl tech.

It’s been quite a year on the vinyl front. There has been activity in terms of hardware and software (the vinyl itself). We’ve seen lots of developments, progress and changes. That has meant that the vinyl scene has flowered, become richer and more exciting and has drawn in more interest from regular vinyl users, those original uses who have come back into the fold and those important, essential first timers, the raw beginners. I can personally vouch for the latter because my resident feature on this site, The 8 best budget turntables that wont ruin your records is still receiving queries and question regarding buying and technical advice…and I wrote it almost two years ago!

So what has been the Top 8 vinyl technology factors from this year? Well, because the improvements and changes have appeared in rather broad terms, we’ve decided not to just give you a list of the top best turntable releases of the year or the best vinyl albums or somesuch. Instead, we’ve looked at wider issues that have been just as significant. So, without any more ado, let’s get up and at ‘em! The big 2015 news? Of course, the Technics turntable is coming back! That said, I love it when technology companies do embarrassing U-Turns. Panasonic’s original deletion of the Technics SL1200 turntable was a cock-up. If the company had done it during the late-’90s? Fine, I could (sort of) understand that. Trouble with Panasonic was this: they failed to read demand, they failed to see the resurgence in the vinyl sector (the figures were out there, people!) and they are populated with people who know more about 4K than analogue. I wonder if Pioneer would have made the same mistake with this iconic brand?

Crosley Vs. The Audiophile

For many audiophiles, hardware manufacturer, Crosley, has been seen as the devil’s spawn: money grabbing, heartless, value-less and featuring as much sonic dignity as Ronald McDonald. But now that the company is about to release the C-10 (aka the Pro-Ject Debut III) this means that this notoriously corner-cutting, marketing-heavy entertainment conglomeration is not only taking sound quality seriously, not only recognising that the audiophile has a recognisably worthwhile goal but that it’s a sector of the market that is potentially profitable. Who’d have thought?

I’m not a person who shuns progress when it comes to technology. Vinyl, turntables and the like deserve a place in our lives but there is nothing wrong with moving forward and continuing development. This is why I applaud the recent developments in turntable technology which not only allow you to plug a USB cable into your turntable to enable you to transfer your analogue music to digital files but also to plug your deck into your TV! Seriously, who would have expected such a thing even 10 years ago? While the true all-in-one is still an elusive object for audiophiles, I am happy to see the continued emergence of those designs that do go part of the way there and do offer multiple technologies within one turntable chassis. This includes the integration of a phono amp but also the inclusion of, say, a headphone amp (stand up VPI’s Nomad). The latter is ideal because it means you can save money on speakers to cut the introductory cost of vinyl hardware to a minimum.

If you get back into vinyl and, especially, if you are of a certain age, you expect music to sound ‘just so’: doused in compression, sepia tinged and sounding warm enough to toast marshmallows. This is Dansette territory. This year, this vintage design has never been so popular. Scour eBay and witness the people who now find it profitable enough to pick up old models, spend time servicing them and then selling them on for around £350 or so. If you want to buy, I recommend a serviced model and head for those brands featuring a Garrard turntable, not a BSR: better sound quality. The redemption of coloured vinyl

The problem with coloured vinyl is that you tend to spend most of your time playing the pigment as the vinyl itself. This is why, I always plump for the regular black version of a typical pressing and not the limited coloured release. That’s changing. German audiophile pressing plant, Optimal, recently pressed the exhaustive Queen vinyl box set, featuring the compete discography on coloured vinyl. I have tested the lot and compared them to the regular black editions and there is, let me tell you, no, I repeat no, difference between the two. Technology has just moved on, folks. Praise the lord.

There’s more vinyl out there than ever before. I have also seen record labels who have been staunch CD-only merchants for many years finally getting back into the vinyl fray again. There’s also a lot more albums out there that are tagged ‘First time on vinyl’ while the amount of beautifully-produced box sets have multiplied (I’m a sucker for a vinyl box set). Of course, there is cash behind all of these decisions. Vinyl is the only physical format out there that’s making a profit. If that’s what it takes, though, then that’s fine.

The development of vinyl technologies and the fulfilment of analogue demand is not just about the emergence of new kit, its the arrival of unfulfilled demand. Currently a massive sink hole has appeared in the vinyl market. Lots and lots of people want an audiophile standard all-in-one vinyl player but… none exists. Zilch. Nada. The best I can find out there are second hand Beocenters from Bang & Olufsen (you can pick them up on eBay from £250 up to around £1,000). Come on manufacturers, sort it out!