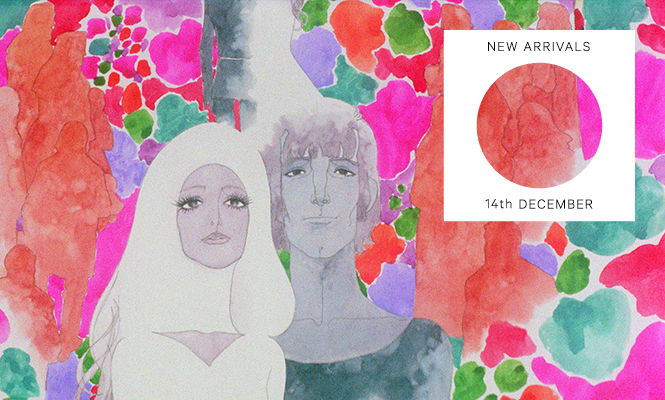 You wait all year for some ice-cold, forward-thinking R&B on vinyl and then two records land at once, just before Christmas. Both FKA Twigs and Kelela are finally here with their excellent EPs from earlier this year, now available on 12″. Better late than never, hey?

Albums to flag up this week include Jeen Bassa’s second player of the year, the first album from Boston hardcore act No Tolerance in fours, and the over-due collab between Beatrice Dillon & Rupert Clervaux. FKA Twigs returned in a flash of white light earlier this year with new 12″ ‘M3LL155X’. Released with a jaw-dropping suite of videos that translates all the theatre and melodrama of her live shows, ‘M3LL155X’ feels like LP1 on steroids, a warped vision of future RnB given a slack leash and scope to explore the limits of the form. At times shocking, and straddling that line between power and vulnerability, the vinyl edition has taken a little longer, but one listen should remind you of why you need this in your collection. Out on digital formats back in October, we’ve been patiently waiting for the vinyl issue of ‘Hallucinogen’. Finally it’s here, and just in time to shine in our 20 best 12”s of the year. Jam City and Girl Unit might have appeared on her game-changing Cut 4 Me debut, but Arca and Kingdom unite on this one. Exploring cycles of love and carnal proclivities across six tracks, the EP refines the electronic sound of R&B with zero compromise on storytelling. A great meeting of forces here for this 7” which was initially a live show commemorating limited cassette edition, but now out there again courtesy of Dais records. With all involved having made their own distinct contributions to industrial and electronic music, this three generational merger and its trio of tracks makes for a most worthy listen. There are only 164 hand stamped copies of this fantastic record around so maybe by the time you read this it could involve quite a bit of money to land one. Basically, Digital Octopus aka Maxime Smadja turns punk into euro disco and the punks absolutely love it. Here you get his interpretations of Skrewdriver, Blitz, Negative Approach and Sheer Mag in all their totally infectious euro disco energy. You need this. While conventional wisdom and Tony Hawk’s 2 dictate that skaters spend their days popping ollies to a soundtrack of Papa Roach and backpacker hip hop, this acid laced debut from & Co. suggests they spend their nights popping molly in West Coast warehouses. The brainchild of skating dynast Alex Olson, the Venice Beach outfit swapped boards for beats and distilled the lysergic gurgle of acid house into the expansive and overarching San Fran sound, happening upon a killer cut that’s so Rong it’s right. Not content with cooking up a bona fide rave burner, the crew get sweetly syncopated on the flip, dropping a modern jazz-funk groover topped with loose and limber Rhodes. This one’s quite the soundtrack event – the first time Quentin Tarantino has ever commissioned an original score, and with his choice being none other than the maestro Ennio Morricone, the man who revolutionized the Western soundtrack is back working on the genre after a 40+ year break. However don’t expect this one to sit quite so comfortably next to your LP of The Good, the Bad and The Ugly, as it has more in common with Morricone’s work on horror movies, and there is indeed a few unused themes from John Carpenter’s The Thing amongst the freshly penned pieces. Morricone and Tarantino fans aren’t going to want to miss this, and there’s a special edition on the way as well from Jack White’s Third Man Records. After bringing the drama on the masterful ‘All My People’ earlier in the year, Jeen Bassa returns to the release sheets with a groove-laden LP of jazzy beatdown, exotic downbeat and laid back hip hop. Taking inspirations from the sketch-book workflow of Dilla and Madlib, Bassa paints an aural picture of post-carnival chill with a golden haze distinct to the capital. Informed by the colour and texture of a broad musical spectrum, the ten track LP flows through funk, jazz, soul and hip hop at ease, all the while retaining the same percussive style and warm production. In the face of falling temperatures and bitter storms, this disc should keep your disposition sunny right through to spring. When you get a record pressed into your hands at the Utrecht record fair from Finders Keepers themselves, you know you’re in for a treat. A psychedelic free jazz soundtrack for screenwriter Eiichi Yamamoto’s 1973 sexualised, occult animation Belladonna Of Sadness, this one’s straight out of the Finders Keepers handbook and breathes life into a record that would otherwise have been beyond any mere mortal’s grasp (the original is currently listed at £1,5000 on Discogs). Dark, dream-like, sensual and way out there, it’s a notorious soundtrack to a notorious and ground-breaking film. It’s been four years since their last record and without doubt worth the wait. This perfect slice of straight edge hardcore is incredible from start to finish. If you take the ‘Hard Stance’ eps along with ‘Break Down The Walls’ you’ll get a pretty good idea of how huge this Boston hardcore is. Released on the excellent Quality Control HQ it comes in a 350gsm laminated sleeve with a poster and download code too. You need this too. Studies I-XVII For Samplers And Percussion

The title doesn’t exactly sell it but Studies I-XVII For Samplers And Percussion would have entered our top albums of the year had it come out on time. Beset by mysterious delays, the “techno goes Folkways” long-play finally lands, just in time for Christmas. 27 short sketches, which you can sample over at Boomkat, that draw on the duo’s shared backgrounds in in jazz, ethnomusicology, electronic music and field recordings.