Inspiring a burgeoning young scene, from Deptford to the international masses.

Steam Down are a multi-disciplinary arts and music collective that hold down a residency at Buster Mantis in Deptford, South London every Wednesday, alongside one-off shows around the city and the United Kingdom.

Known for exchanging vibrant and positive energy with their audience, anyone who has seen them at their spiritual home will agree that they have a lot of love to give, a feeling that is reciprocated by the crowd, and one that is massively refreshing for Londoners in this current socio-political climate.

The group consists of a wide range of individuals, lead by Ahnanse – a multi-instrumentalist, composer and producer who founded the collective in 2017, along with writer/poet Brother Portrait, DJ/illustrator Alex Rita, keyboardist/producer/composer/teacher Dominic Canning, drummer/producer Nache aka Edward Wakili Hick, artist Nadeem Din-Gabisi, singer/poet And Is Phi, musical duo Sawa-Manga and poetbeat maker/producer D’Vo.

We caught up with Steam Down to find out about their intentions as collaborators and storytellers, as well as what the future holds, while capturing their electric performances during a recent Buster Mantis night, Worldwide FM’s birthday at EartH Hackney and their show at Jazz Cafe in Camden last weekend.

What are you musical inspirations, and how have they affected you sound in a collective sense?

Our range of tastes is very wide. Everyone is very eclectic, and the bigger purpose is to explore more ways of freedom. Beyond music, Steam Down is a multi-disciplinary collective – there are dancers, writers, visual artists, people who make clothes, people who rap, people who sing, people who play several different instruments and produce. This is a fully encompassing art project, we are still getting to know each other and showing each other the gifts and the wealth that we all have. The more comfortable that we become with each other, the more that our perspectives will merge. This will give space for us to excavate what we have now, so who knows what we could actually make in the future… 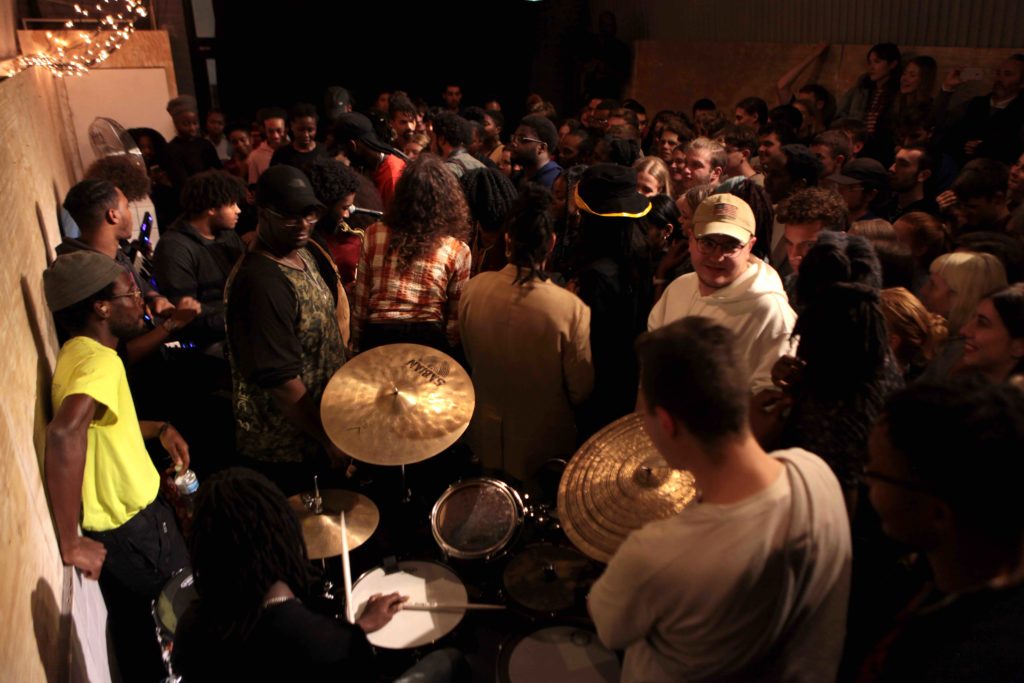 The roots of what we are creating starts outside of that context, jazz is not the only source of improvised music in the world. It happens in many forms and many cultures, we all come from different spaces and cultures, and it isn’t black American culture, none of us where born there, so actually we are bringing all of those other experiences into this. 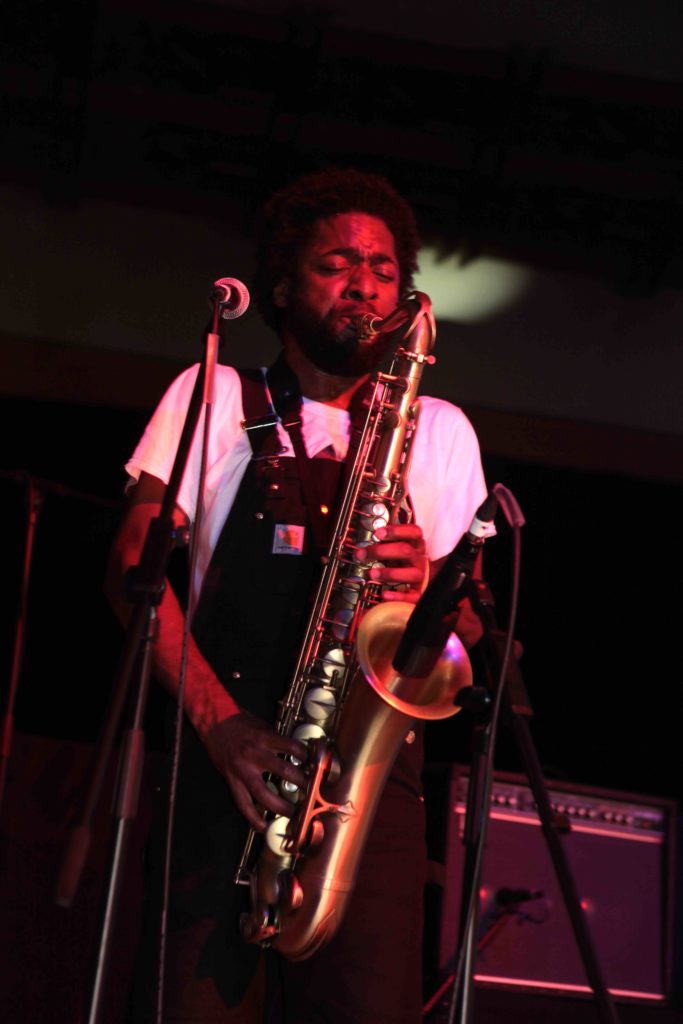 We are inspired by different approaches and life experiences that transcend genres; that is what appeals to us in music. What you do categorises you right? So Brother Portrait and Nadine are poets, MCs, wordsmiths and writers. And then Alex, And is Phi, and Carli are singers. Additionally, we have a whole bunch on instrumentalists, some of us produce as well.

Yes there is a live sound that you hear at Steam Down but there is also a produced sound. Whatever genres and elements you can put together with those experiences unify us as our sound is all of those assets put together. 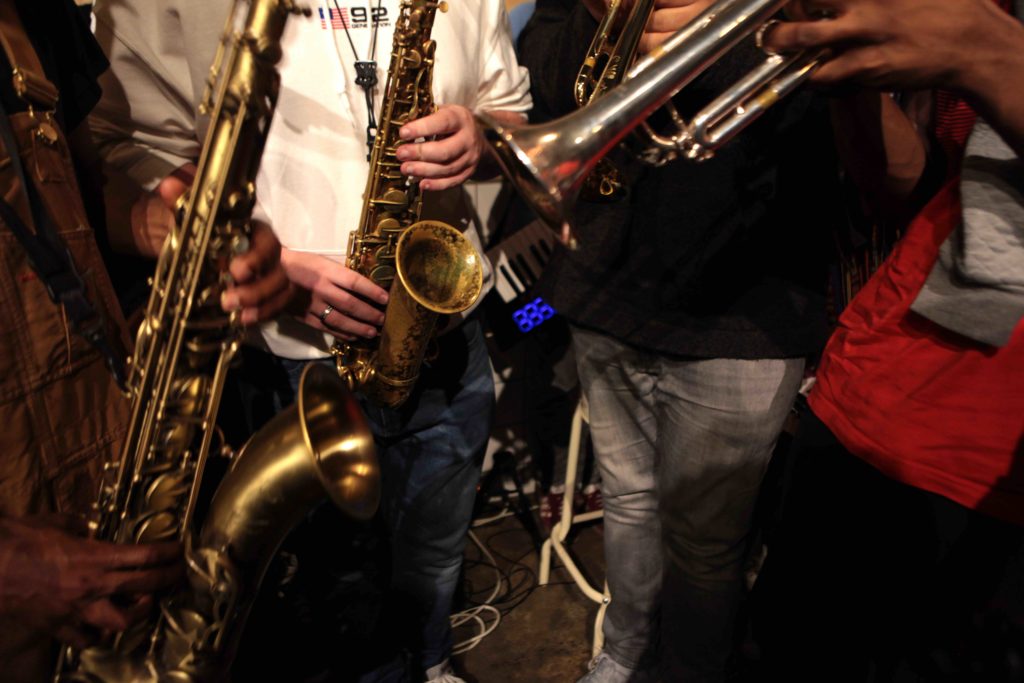 How does that make you feel as artists, with all these different ways of working?

It just makes it interesting; there is always new stuff to explore. People bring their own inspirations and the combination of that is what creates the magic right? When we are up on stage and improvising, everyone’s stories are coming out at the same time – that is down to what is going on personally in their life as well as what is sonically influencing them at that time. 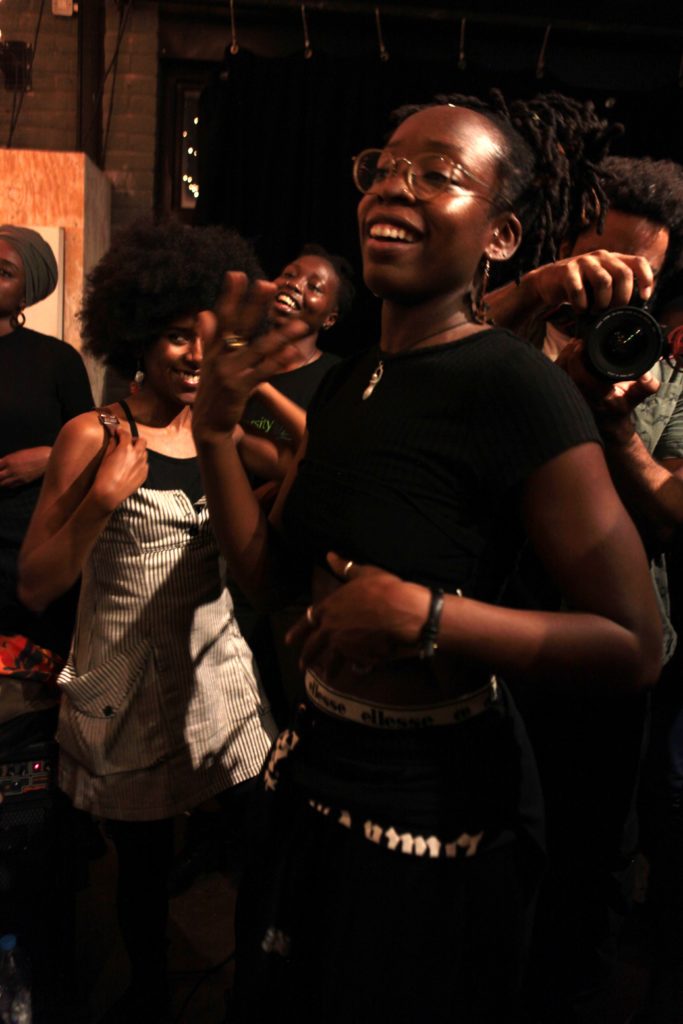 It is also nice to be surprised. In a society that is so hegemonic and monotonous it’s nice to surprise yourself and be surprised, by people that you know well. There is something about the artistic energy and the sound of Steam Down. Sound itself is so powerful, I often think that sound and light are the same things, we just perceive them in different ways, they are just waves. When you’re in the sound, you’re also in light – so there are things that we express that we wouldn’t be able to in a private situation, that isn’t a genre it’s a practice. 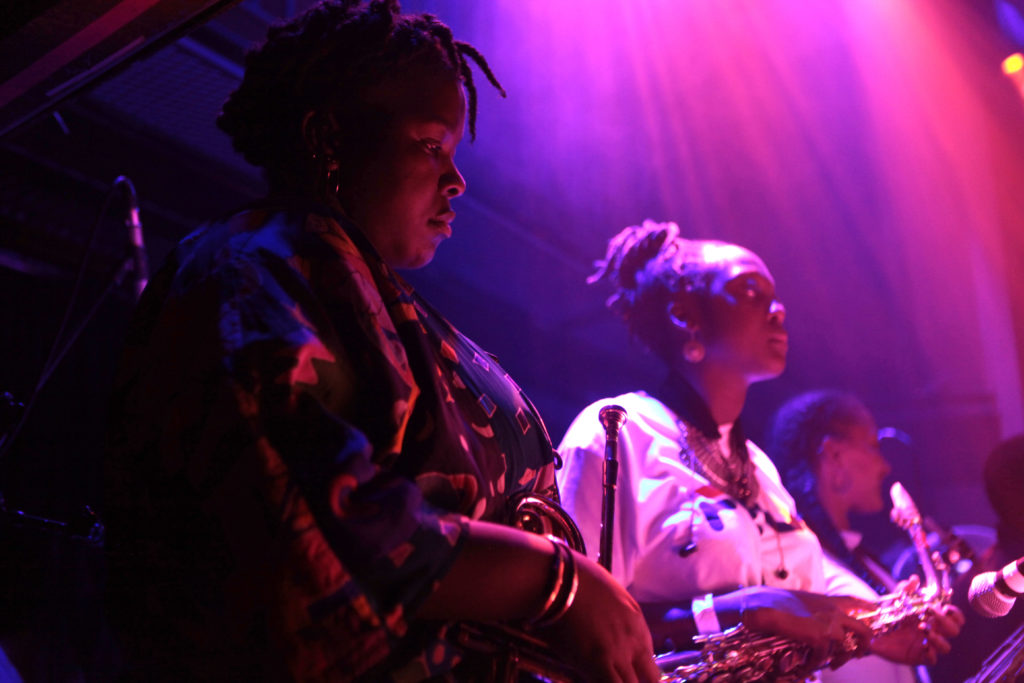 Furthermore – a photon is a wave that behaves like a particle and phonons are particles that behave like waves, and a phonon is a vibration so yes – if everything is a wave and the closest thing that we have to waves that we can experience is sound, then, in a way – we hear everything, and everything is music. 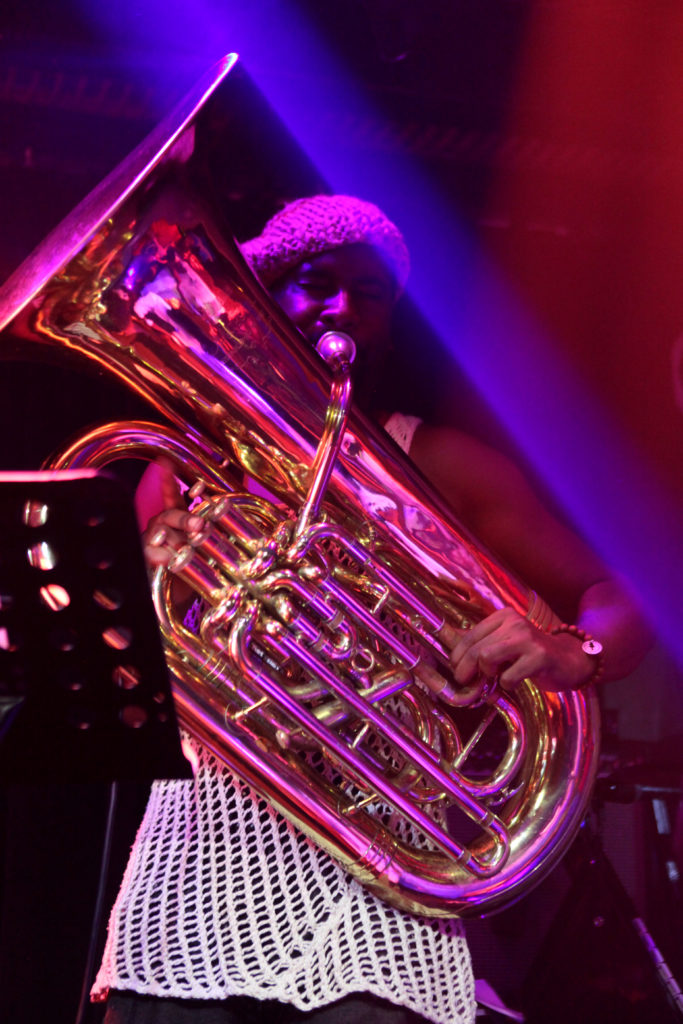 What does this regular spot at Buster Mantis give you as artists? And are there any pressures?

Because it is every week, Steam Down taps into how people are feeling, then and there, in the space. In the space of one week a lot of stuff happens, life can be intense in London, and there are so many things to express. I feel like we have a responsibility to the space. We ask questions like: what ideas do you share with the audience, and when can you be completely open? But then you realise that not everyone is ready for where you are at that point in time. That is the only pressure. So if someone is new to the space, how are they going to relate to someone who has been here for six months? 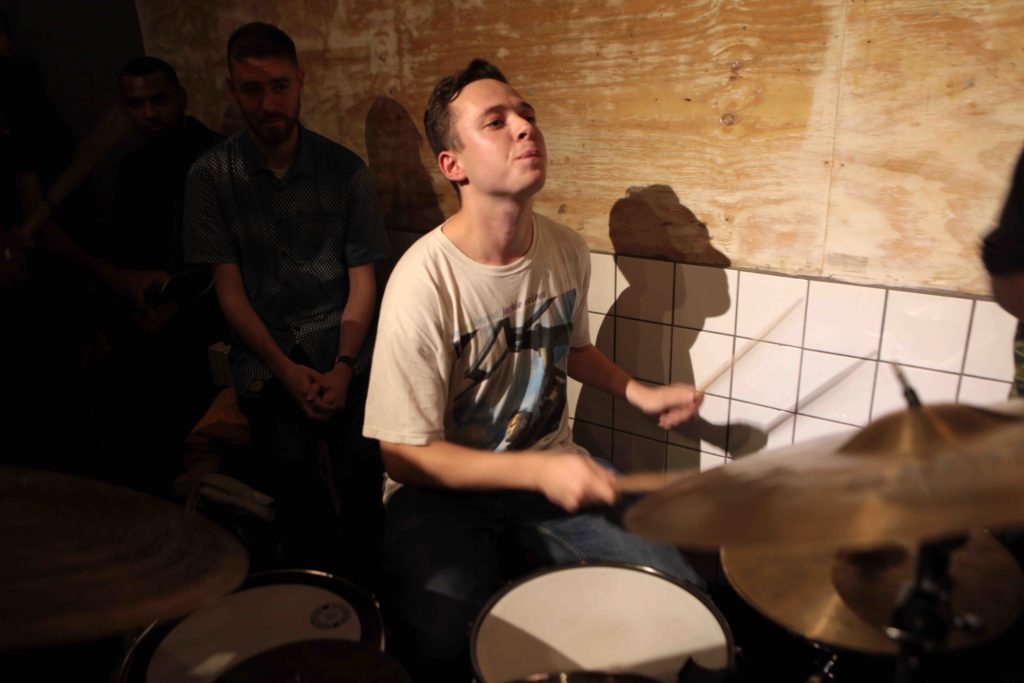 The regularity also has a part to play, when you know that you have something steadily it gives you the ability to have perspective. I can give myself more time, or I can be generous and compassionate to myself and push myself over a cliff. Having that regularity is a powerful resource, which is a responsibility when it is public, it is a resource that doesn’t come easily so there is a lot to negotiate, continuously. When you have something regularity you can build. 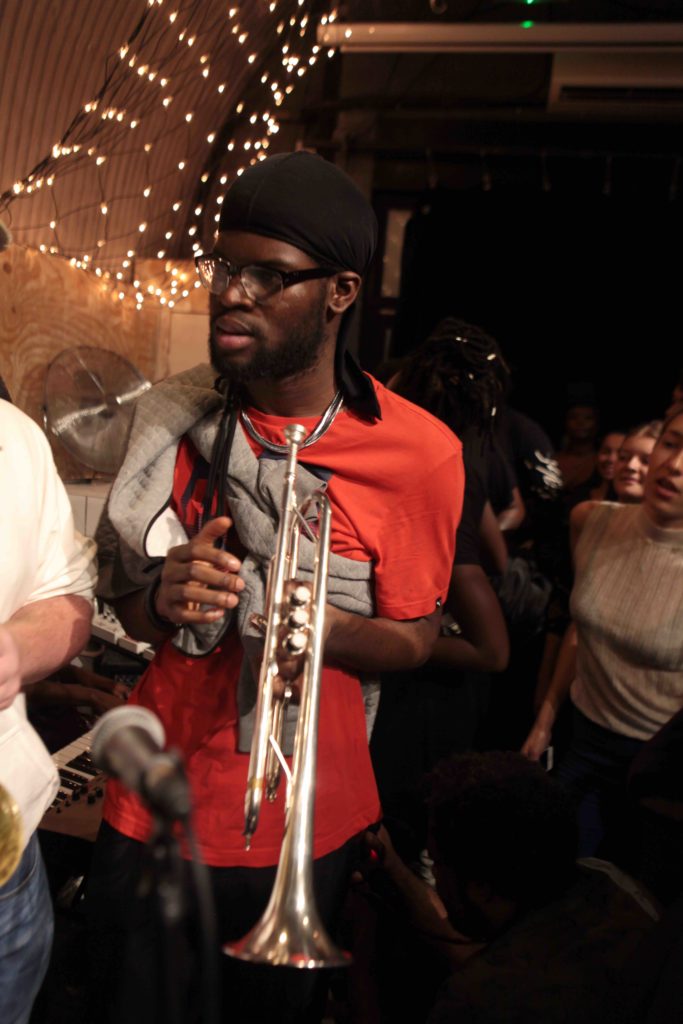 Can you define your ethos in a collective sense and does anything change when you play outside of this space?

In a sense, we need to work towards being more proactive at times, Buster Mantis is our home base. And, there have been times when we played at other venues in London and there has been a level of misunderstanding in terms of why we have been invited in, as we are not ‘entertainers’. It’s message music, it’s purpose music, and I think that sometimes we find ourselves in spaces where we have to wonder if they really understood that before bringing us in. 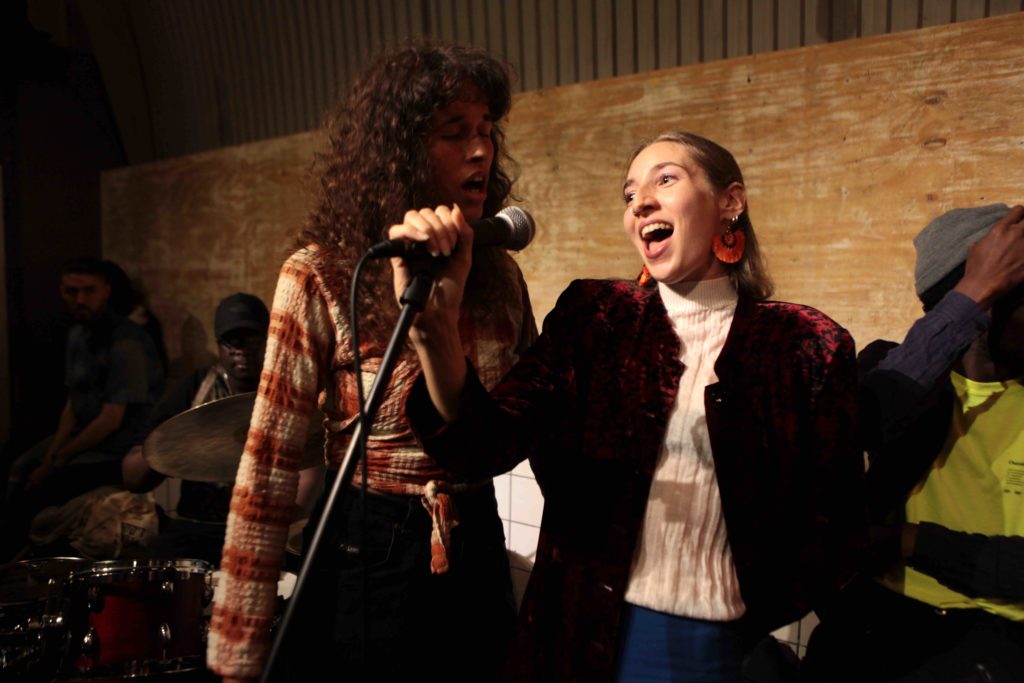 Again, this is a process of growing and reflecting, especially when we take it outside of Buster Mantis. We have to think of how to ‘set the tone’ and open the space and set the intention to bring everyone in. On that note, it is actually quite humbling to know that the sounds and the music that you are a part of can contribute to someone’s well being and seeing. Music is universal, you don’t need to know every word to know what they are saying, or to feel what they are saying, music can transcend those limitations of language and reach deeper. 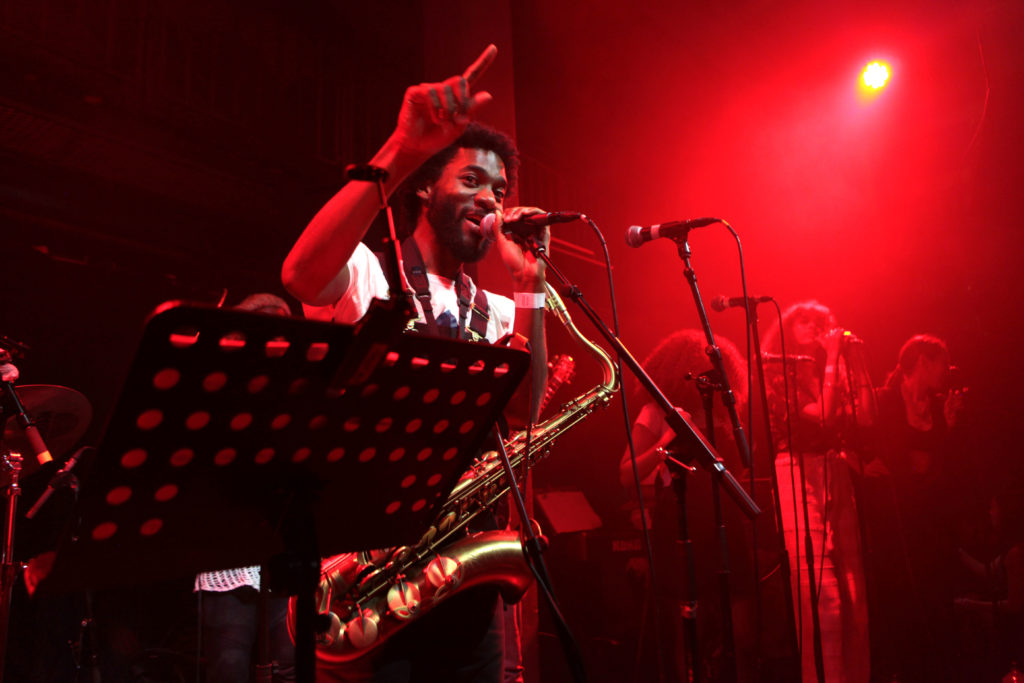 How does that translate to how you interact with your audiences?

If you have been inspired it is your duty to inspire others. The places change, and the way that you deliver the message changes, but ultimately it remains the same. We are attempting to inspire positive changes, and improve not just ourselves but the people that we are speaking too. It is always a cyclical process, we are not just thinking of ourselves, we do this with other people in mind – in terms of what they will get from the experience and what they can do with it.