A leading figure in the Rastafari movement in Jamaica, Samuel Clayton passed away in late 2018, at the age of 83. As chief orator of The Mystic Revelation of Rastafari, he placed poetic utterances at the centre of his musical and spiritual activism to challenge the Eurocentric hierarchies that still constitute contemporary Jamaican society and the distorted portrayals that fill the history books.

Samuel Clayton’s words serve as a reminder of the historical injustices that laid the foundation for the inequalities of today, seeking a fuller understanding of the many systems of oppression that have shaped Jamaica and the wider world. A thoughtful and determined man who was wise and welcoming to those seeking deeper knowledge, Sam was a key figure in the growth of The Mystic Revelation of Rastafari in Jamaica and the spread of Rastafari culture internationally.

Clayton met the renowned Rastafari drummer Count Ossie, AKA Oswald Williams, in Kingston’s Rastafari underground during the mid-1950s through the regular drumming, chanting and reasoning sessions know as ‘groundations’ that Ossie held at his home-base camp in Wareika Hills.

“As Rastaman, we all meet at Count Ossie’s place,” Sam Clayton explained in an interview before his death. “I was a Rastaman from way back, from I was a youth, but I visit his place during the time of my late teens to early twenties. Every Sunday night we meet and we have our groundation, up in Wareika Hills, Rockfort; it was Count Ossie on the drums and our spiritual chant was how we meet. His music was very attractive and we were people who loved music; we love our Rasta niyabinghi drums, and it plays anywhere that Rastaman meet, but it was more dynamic at Count’s, because of all these other musicians, instrumentalists that identify themselves with the Jamaican music in different ways. That musical attraction was always there. I would play all the different drums, but in this band I ended up playing the live percussions, the tambourine and the maracas.”

Ossie’s drummers played on The Folkes Brothers’ landmark ‘Oh Carolina’, and a number of other recordings during the late 1950s and early 1960s, and the wild jazz jams held at Ossie’s place indirectly led to the creation of ska.

Brother Sam was part of the Rastafari delegation that visited Ethiopia in 1961 and he was one of the twelve Rastafari emissaries given medals by Emperor Haile Selassie I himself during his official state visit to Jamaica in April 1966. Then, in the early 1970s, The Mystic Revelation of Rastafari was officially formed after musicians from The Mystics group merged with Count Ossie’s drummers, shifting Sam Clayton into his poetic vocal role, with saxophonist Cedric ‘Im’ Brooks becoming a major part of the jazz-based musical arrangements.

“We were introduced to a band, they were called The Mystics,” Brother Sam recalled. “Cedric is a very long saxophonist and an extraordinary musician who plays several different instruments, and it wasn’t difficult when we meet because Count used to be playing with all these great musicians like Don Drummond, Tommy McCook and Vivian Hall. There’s a psychological relevance of music in this part of the world: Jazz is a music that was loved and the vibration of the jazz is the same as the vibration of the reggae, it’s only that in jazz, it embraced the instruments, while in reggae, it embraced the voices, but it’s from the same displaced people, in that soulful way.” 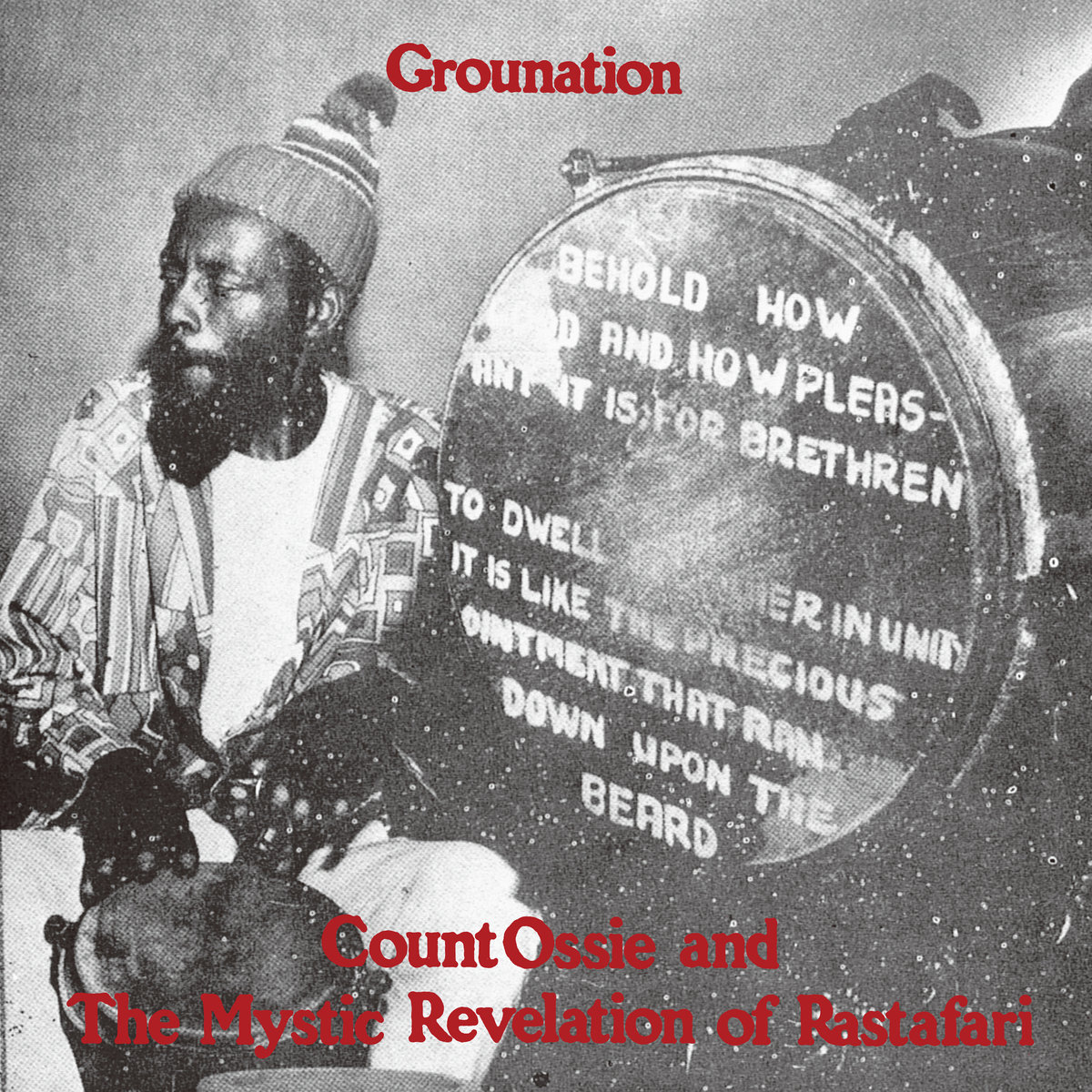 The first long-playing album to surface from the combination was the incredible triple-disc release, Grounation, first issued in Jamaica in small quantities on the group’s New Dimension label in Jamaica in 1973, along with a British issue on Ashanti (various reissues would follow at home and abroad).

An astounding release in many senses, Grounation used drumming, chanting and jazz to further a loving vibration, a less discordant and more Africanised take on the type of music emanating from Sun Ra’s Arkestra in the USA, which Brooks had previously been part of.

“We see love as the cohesive force that binds all events to make life purposeful,” said Brother Sam of the album’s overriding theme. “Love is not simple; it’s an integral part of everything. Planets moving around the sun, that’s love.”

The Mystic Revelation of Rastafari received an overwhelming reception at their debut performance outside of Jamaica, which took place in Guyana in 1972 at the first Carifesta, the celebrated Caribbean Festival of Arts held every four years. When jazz giant Duke Ellington subsequently visited Ossie’s camp, he encouraged the brethren to bring their music to the world, and they went on to perform and lecture at prestigious North American universities.

Jazz pianist Randy Weston later arranged an appearance for the group at the Newport Jazz Festival, but unexpected problems meant that they were ultimately unable to attend. The following year, the group released the stunning concept album Tales of Mozambique, examining the legacy of colonialism, with Brother Sam’s historical treatisies illuminating the proceedings.

“Some of the things that was happening in Africa show that, as the Bible say, we as a people were offered hate and some kind of deception for our love,” Sam explained. “I remember in school, Vasco Da Gama went around the Cape of Good Hope and landed in Mozambique on Christmas morning with high fever and his ship wrecked. The people took him, restored his health, repaired his ship and even gave him a guide to go on to Goa, but he wrote in his diary that he came across a few ‘petty princes’ — you see, he take their love for weakness and from that day it was nothing but blood, sweat and tears. So that was something that was shown to us: we love people, they end up trying to destroy you. Tales of Mozambique came out of that vibes.”

At the height of their international popularity, Cedric Brooks left The Mystic Revelation of Rastafari to form The Divine Light/Light of Saba group. While there was no animosity in the split, real tragedy struck on October 18th, when Count Ossie was killed in a road accident caused by a drunken bus driver.

Although the group’s recorded output naturally dwindled after Count Ossie’s passing, Sam Clayton and his peers didn’t cease working. Their community groundations continued as usual and they occasionally performed at important public events, including the official state visit of Mozambique’s Samora Machel in 1977, while members of the group later toured Africa to establish cultural exchange programmes with Jamaica. Pharaoh Sanders and Nina Simone also travelled to Jamaica to perform with them.

But the group might almost have been forgotten outside of Jamaica if not for select high-profile performances given in France in the early years of the new millennium, including an artistic residency in the town of Roubaix, where they gave collaborative concerts with the local musicians that they had tutored. Those events paved the way for the release of their latest album, Inward Eye, conceived as the third part of a triptych began with Grounation and Tales of Mozambique. The album was recorded in 2003 at Harry J’s studio and released some years later on independent label Sound of World.

“Niyabinghi music is a music for the inward eye,” Sam suggested. “William Wordsworth was talking about daffodils – he said, ‘For often on my couch I lie in fecund or in pensive mood, this clash upon the inward eye, which is the place of solitude.’ So this music is the mood of retrospect, for one to really meditate. The Bible says, ‘Commune with your own heart upon your bed and be still, offer the sacrifices of righteousness.’ So it’s a part of global upliftment. We are coming from far, mankind, and we reach quite a distance; we understand a lot of things, so this is all the contribution of the artists over the years, far and wide.”

He continued: “In Niyabinghi music, the drums is an integral part of your whole being, your systematic vibrations, because where there is more light there is more heat, where there’s more heat, more movements and more systematic vibrations. It’s an ordained equatorial instrument of your heartbeat, it’s an integral part of us. The drums are ancestral, and although we didn’t come to this Western world with even pants on our backsides as slaves, the drums was there in different forms, with the expression of music that one uses to console oneself through the years.”

In more recent years, Soul Jazz’s concerted reissue programme has brought the classic works of The Mystic Revelation of Rastafari to a new audience.

The Mystic Revelation of Rastafari continued to hold their regular groundations in eastern Kingston, as they have done for over 60 years, but after a time, Brother Sam’s health forced his absence. Ultimately, he saw his work as part of a broader continuum that responded to Jamaica’s post-colonial reality and the world’s contemporary situation, using music and words to propagate peace.

“Reggae music, Rasta music, music in its fullness is that special part of man and our music in the Caribbean carry us beyond our borders,” Sam emphasised. “We came without pants on our backsides, but the music came with us, because when we came to Jamaica, we start making all kind of drums, like Pocomania drums, Kumina drums, Rasta drums. You can imagine the Maroons used to use their drums, that was their sound system, that was their theatre, that was their everything.

“So because of that comfort that the music affords us, Rasta music became a part of what is now reggae music. I remember in the early days, people used to say, ‘Rasta is madman’; you didn’t have much company, so your company was always the reasoning on the camp, and your drums, and the chant. But like everything else, things evolve and it becomes broader, embraced by people far and wide. Things that people didn’t understand, they eventually got clearer and clearer, and so the music got wider and wider.

“The whole expression is, as I used to say in the early days, really Rachel weeping for her children, it’s a lamentation. That’s what the music is all about, lamentation. You listen to the lyrics, some of them may not be in line with exactly what was desired, but they fit in some way: ‘Want to go to Zion in this time to hear River Jordan roll.’ And anything that thinks about Africa was a part of the songs that we used to chant: ‘By the rivers of Babylon, where we wept when we remember Zion.’ So music in its fullness is that special part of man and it’s not just music to dance to, it’s music for spiritual work to make one wholesome and understand a thing or two. That is what the whole reggae music is all about.”