“It will be weirder, because they are going to spend more time in the Upside Down.”

Unless you spent last summer in the Upside Down, chances are you were glued to Netflix sci-fi hit Stranger Things and hooked by its eerie score courtesy of Kyle Dixon and Michael Stein of S U R V I V E.

Much more than your typical TV soundtrack fare, Kyle and Michael managed to give the project its own completely singular sonic identity, creating music as immediately iconic as, say, themes from Twin Peaks or X-Files or any one of John Carpenter’s legendary film scores. It’s as if the band were tailor-made for such an endeavor: obsessed with analog synthesizers, their sound is both otherworldly and steeped in the past, totally fresh yet spookily familiar.

S U R V I V E’s story begins much, much earlier than their work on Stranger Things: for the past eight years, the band have been playing shows to a cult following, amassing a veritable arsenal of classic synths, and releasing albums so dense and heady, they’ll make even the most ardent of prog rockers pause and readjust the levels on their consoles.

Their latest release, RR7349 (all their LPs are simply titled by their catalog number), is a perfect example of their purist approach to synthwave, a heavily textured block of sound thats at times recalls Tangerine Dream at their most cinematic, Brian Eno at his most layered, and Giorgio Moroder at his least disco.

We met up with Kyle, Michael, and their bandmate Adam Jones right before they played a sold-out show at Kantine am Berghain in Berlin, where later that evening the audience swayed hypnotically in pools of blue light as S U R V I V E fiddled with their mothership of a synth rig and literally shook the plaster from the ceiling with the sheer force of their sound. It was big, it was loud, and it was unlike anything else currently being made in electronic music. 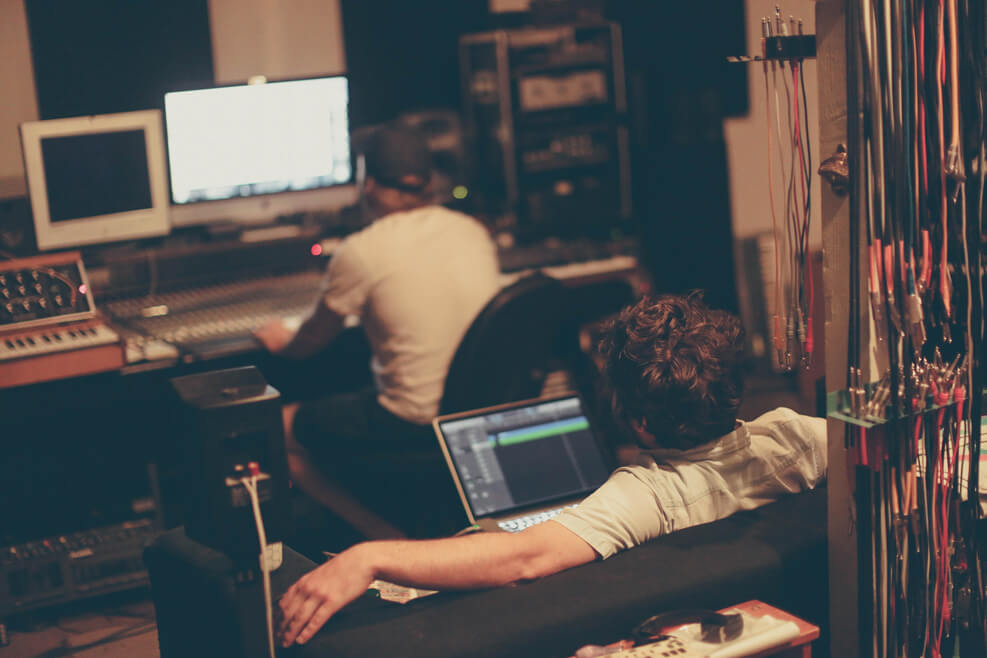 So, the big question is obviously, what you are planning for Stranger Things, Season 2?

Kyle: We are working on it. It should be interesting. I think they’ve already come out and said that things are going to be a bit darker and weirder. We’ve yet to really see what that looks like.

Are you working with the same set of influences, or are there any new elements you’re bringing to the table, musically?

Michael: I picked up some new equipment, and that stuff always inspires some new sounds and textures to fit in there.

Kyle: I mean, it’s always kind of hard to tell what’s going to work until you get in there. Hopefully, it’s a bit weirder this time. I’m sure it will be weirder, because I think they are going to spend a little more time in the Upside Down this season.

Kyle: I don’t know if it’s a spoiler! [Laughs.] I think they already mentioned it. 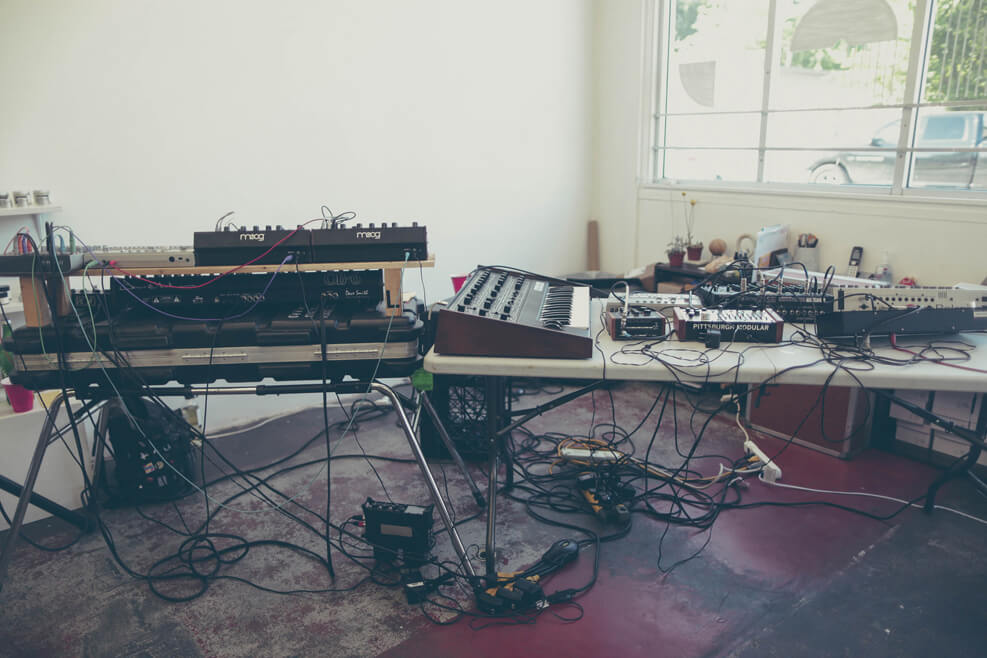 Working on a TV show is very collaborative. How does your work process compare when it comes to scoring film and TV to when you’re making a S U R V I V E album?

Kyle: For writing songs for the album, most commonly it’s a sound and then sometimes the sound will remind us of a word or a situation and then we can play off of that. You can’t help but get some type of imagery when you hear instrumental music with no lyrics to guide you on how to feel. With the film scoring, that’s already done for you. You have the situation, you have the image, you know what tone is completely not going to work—you don’t have to start from a blank slate like when writing a song.

What are you favourite sounds to experiment with? Noise from modular synths?

Kyle: A lot of times you can get some weird textures from them, yeah. Just using equipment that’s maybe older, like even older than the synths. Like adding tape echo—that’s an actual mechanical machine that’s not perfect, so when it’s going, the notes will warble in and out. That’s something we use often.

Michael: That’s a good way to texture something that’s really sterile-sounding. We put a lot of texture in our music, there’s a lot of sculpting and a lot of layers and little ear-candy stuff. 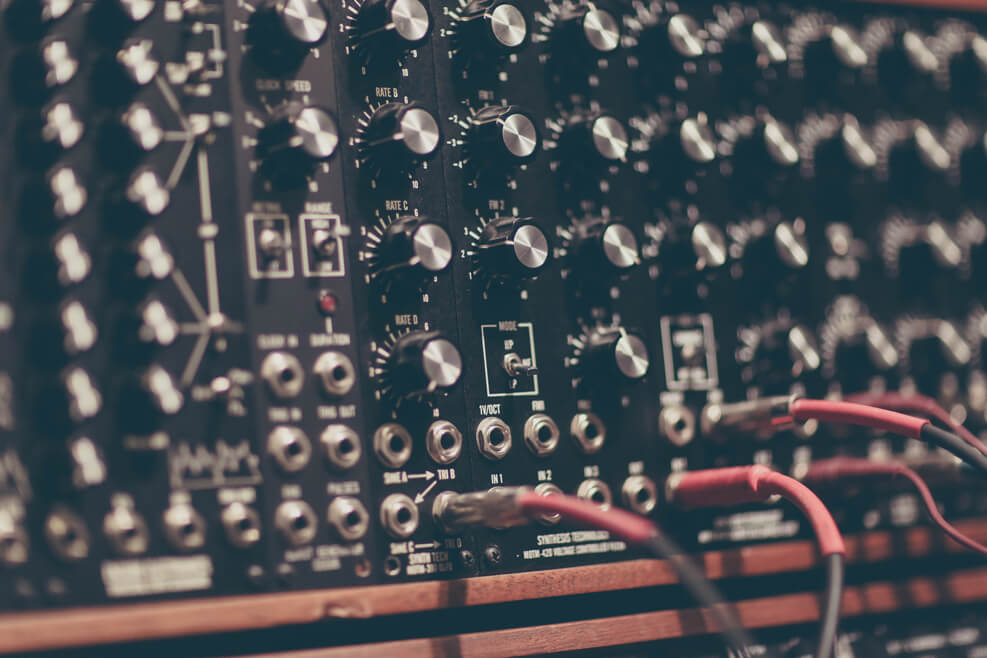 Kyle: For many of the songs, you set up a little system to work within. So, you’ve got a drum machine that’s maybe going through a modular, or sending some sort of signal to a modular that’s affecting the bassline. So then, whatever notes you play also affect the rhythm, so there’s a little feedback loop of all these elements informing each other. It’s almost like when you get a Casio keyboard, you know how it will have like— 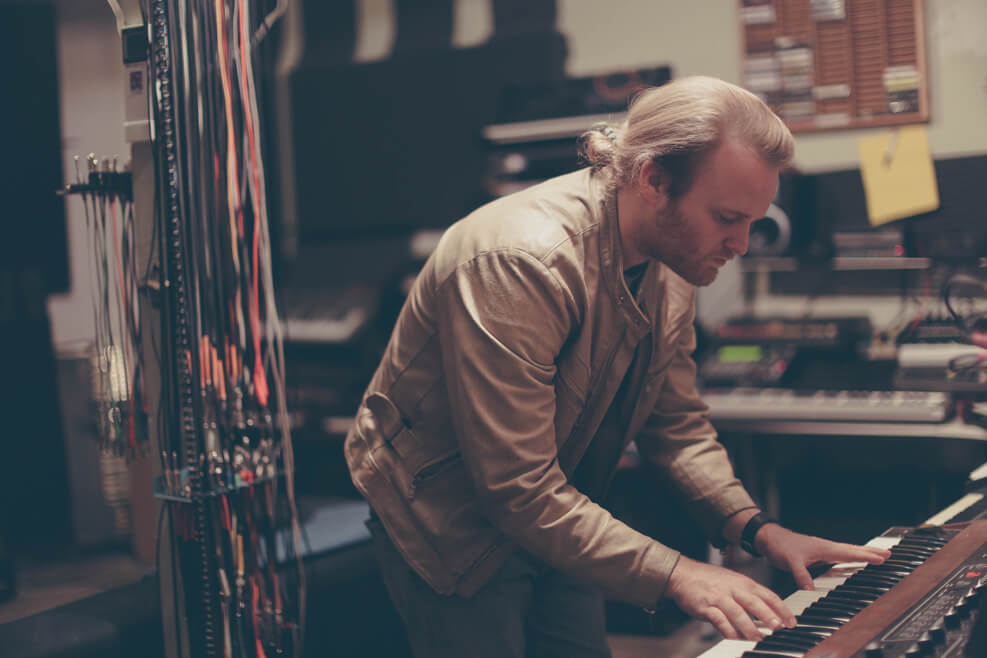 Kyle: Yeah, the Bossanova setting! It does the beat and all that. So, we’ll set up things that kind of work like that but with our own accompaniment. That can progress a song pretty quickly, and then we just edit from there. On a song like ‘Dirt’, once that whole system got set up, we got really attached to that percussive sound. It’s not melodic, but there’s this beat going through the whole time. I was like, ‘We gotta record this,’ because it was on the modulator, and if you unpatch it, it’s going to be difficult to recreate.

Michael: So many times we’ll turn a machine off, and then turn it back on, and wonder why everything’s different.

Kyle: Once you get that setup right, and it’s working, you really need to try your hardest to record as much of it as you can because you may not get it back exactly the way it was.

How much does the equipment that you use dictate the final song? Do you write with one specific piece of equipment in mind?

Kyle: I don’t think this is that uncommon, but a lot of times when we get new pieces of equipment, we tend to use those a lot because we’re excited about them, so that’s definitely a factor. I think you could write most of our songs in a similar way, with just a couple of synths, but again, when you’re setting up the systems, you could get constrained with that, and then use that set-up until it’s done, because you can’t go back and do it again.

Adam: We kind of just write songs with whatever gear we’re focusing on in that particular session.

Kyle: A lot of times, the very first take could be what makes it on the recording, unlike a normal band, who would go and rehearse a song for weeks and then go into a studio and record it perfectly. We kind of work the opposite way. 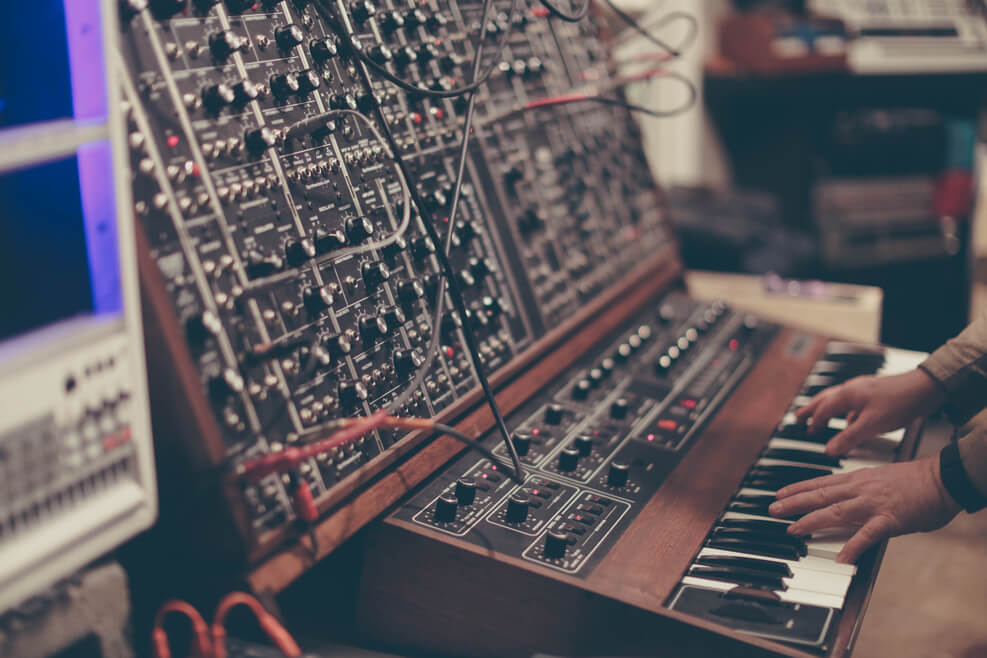 Adam: Sometimes, it’s more about experimenting and capturing an event, even more than a concept or an idea. It plays into that—you have to have a concept or an idea behind it, but it’s also the fact that it just happens that you manipulated some circuits in such a way that it won’t be the same when you fire back up, you know? Then you’ll be like, ‘Man, what kind of vibe was I on that night? That’s a cool sound but this could never be a S U R V I V E song!’ [Laughs]

Michael: That happens all the time. Our songs are very much a long, sculpted process of adding and subtracting. I would hope that sonically they have a texture or a tone that would make S U R V I V E sound different than a band that plays in a similar genre. We’d hope that we have a sonic imprint.

Adam: When we’re file-trading or doing collaborative sessions in each other’s home studios a lot, that can also totally change the flavor of a song out of the blue. It’s a committee of ultimate hard-to-please haters. [Laughs] 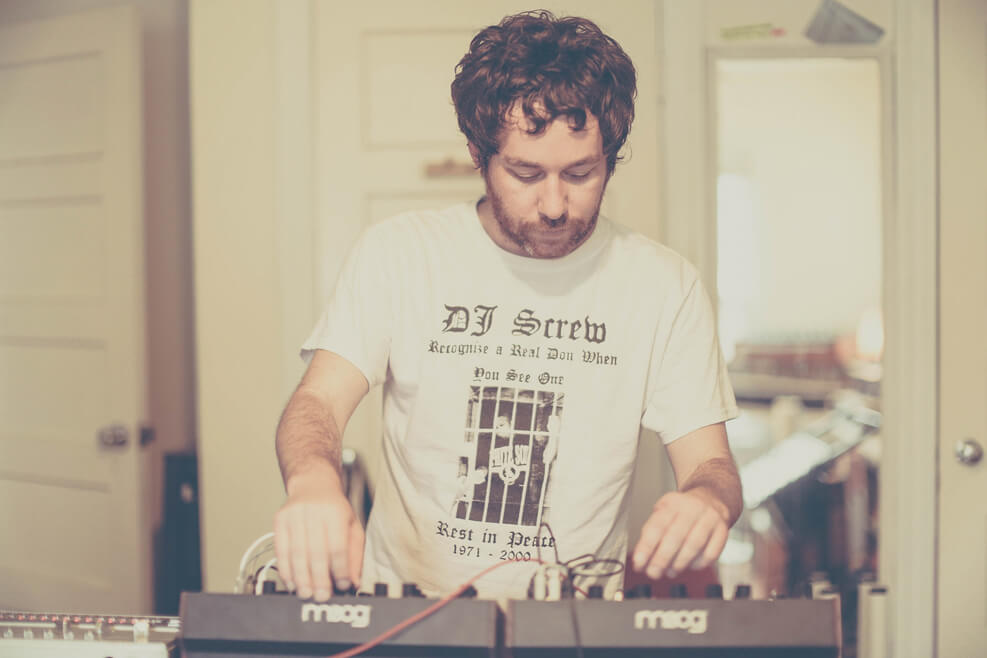 The past year has been pretty big for you guys. Selling out shows left and right, not that you weren’t before—

Michael: No, we definitely weren’t!

I didn’t mean to sound like you guys are completely new on the scene though, you’ve been around for a bit now, right?

Adam: We’ve been around for eight years, but up until six months ago, if we were just to play some random, nowhere town in the US, it’s not like we’d draw more than like, 80 people, and it would be mostly kind of dorky dudes that are really into weird music. [Laughs] Now, we don’t even have to explain our music anymore.

Kyle: People used to be like, ‘Oh, you play in a band? What kind of music is it?’ And we’d be like, ‘It’s… electronic. Say that the Cure had no lyrics or guitars…’ 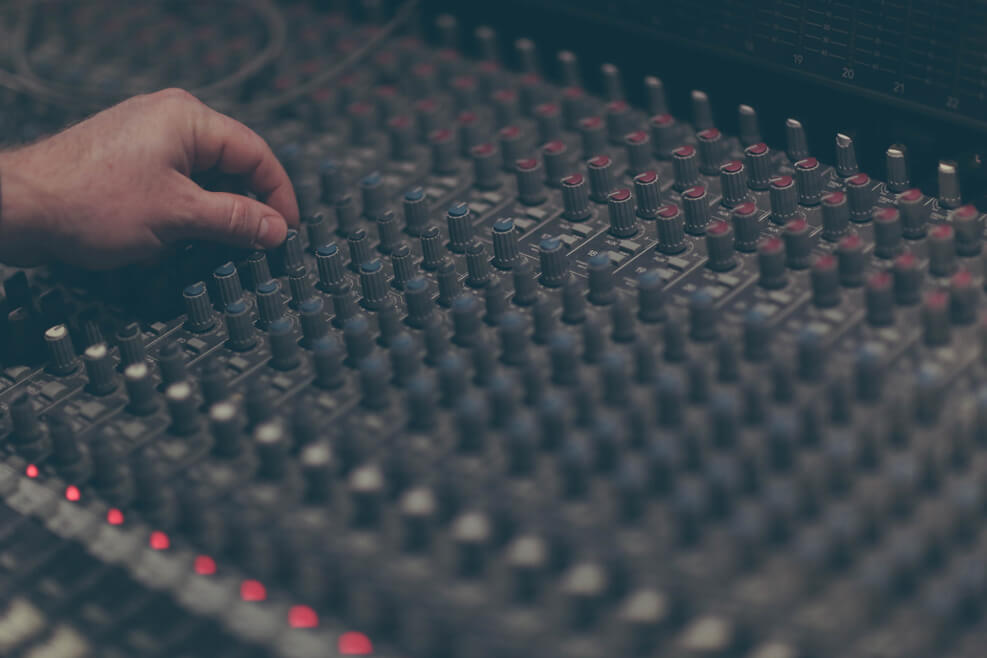 So in the stuff you’ve seen or read about yourself in the past year, what do you think people have gotten right, or wrong, about the band?

Adam: One thing that’s weird is people being super focused on the gear that we use. It’s sort of like, instead of having a singer, or Eddie Van Halen, or Slash or someone like that in the band, we kind of just have a shitload of gear. So it’s great for us in a lot of ways, because a lot of synth companies want to sponsor us, but because of that people just always want us to identify gear. Immediately after every show there are people who stick around who are like, ‘How’d you get this one sound on this one track?’ If you ever tell them it’s a VST or a digital synthesizer it’s like you crushed their heart and destroyed their dreams. Like, ‘Nah man, we just pitched it down in Ableton.’ And they’re like, ‘What? No!’ 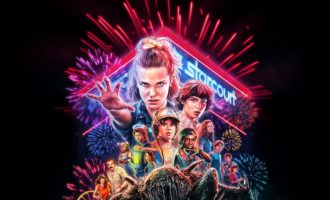 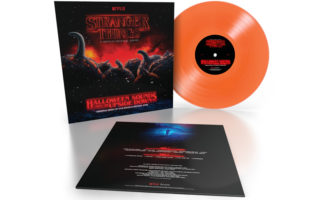 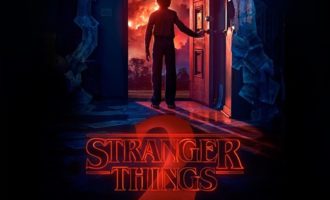 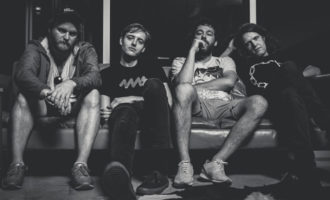