“Before any orchestra or ensemble performs a concert, they do a tuning, and they always use ‘A’. Tuning forks always use ‘A’, and a piano tuner starts from ‘A’. I was fascinated by this fact, even from childhood,” shares Ryoji Ikeda

“Why ‘A’? I investigated this scientifically and well as historically. I tried to play back different ‘A’s at the simultaneously, over a very long time. It completely depends on the environment you have to walk in. Every single second is a completely different experience. It never repeats…

The point is that you can’t see it, you really have to feel it.” 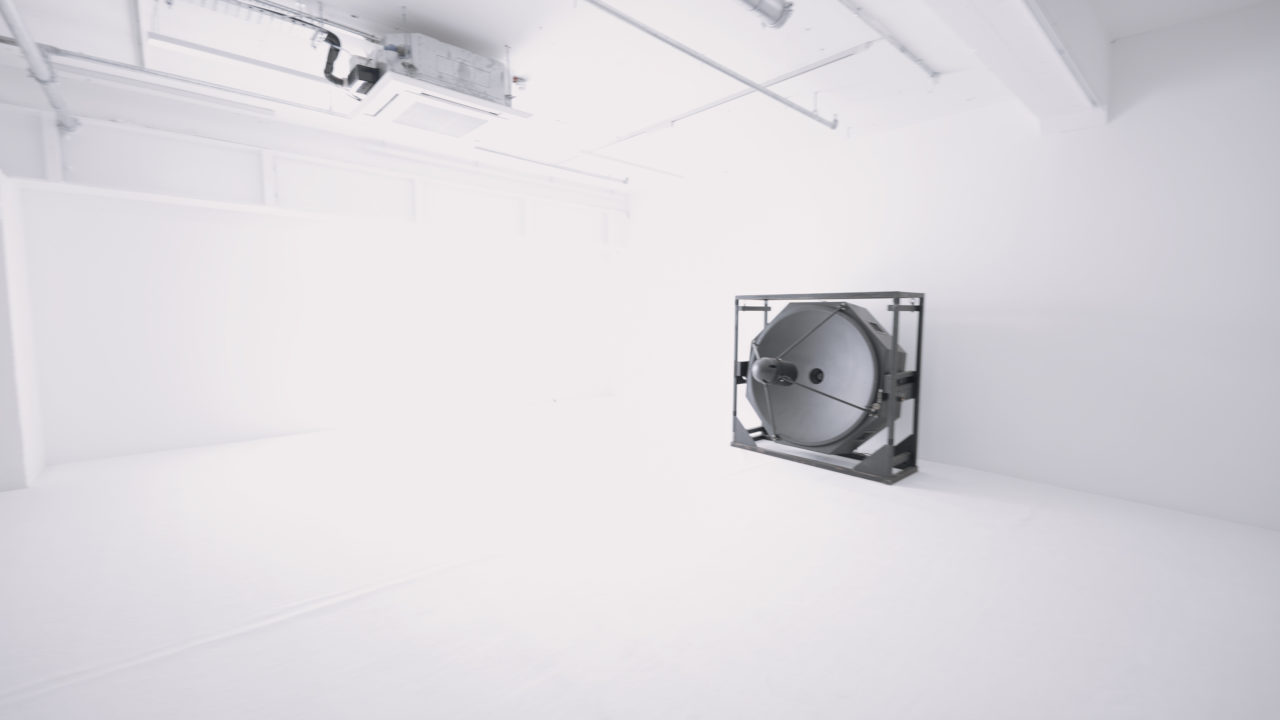 In 2000, Ryoji Ikeda made his debut at the Hayward Gallery as part of Sonic Boom – a group show curated by sound artist and theorist David Toop, which also featured work from Brian Eno, Pan Sonic, and Sonic Youth’s Lee Ranaldo. Ikeda installed six speakers on the walls of a corridor in the gallery, each of which, unbeknownst to Toop, were tuned to project differing frequencies of ‘A’.

“During the ’70s, the International Organisation for Standardisation fixed that ‘A’ equals 440 Hz, but even contemporary orchestras never follow this,” explains Ikeda. He uses the example of two tuning forks, which are also pitched at A: George Frideric Handel’s tuning fork which in 1751 was tuned at 422.5 Hz, and a tuning fork used by Steinway & Sons to tune pianos in London in 1879, which was tuned at 454.7 Hz.

This variation inspired Ikeda to start exploring frequencies of ‘A’ in classical contexts. From these, Ikeda selected six frequencies of sinusoidal waves – single frequency sound waves – to be emitted simultaneously . The result is a sound field that shifts as you move around the space. Superpositions of different frequencies create unique constructive and destructive interference tones, resulting in what Ikeda describes as “invisible patterns of very complex sound fabrics and resonances.” 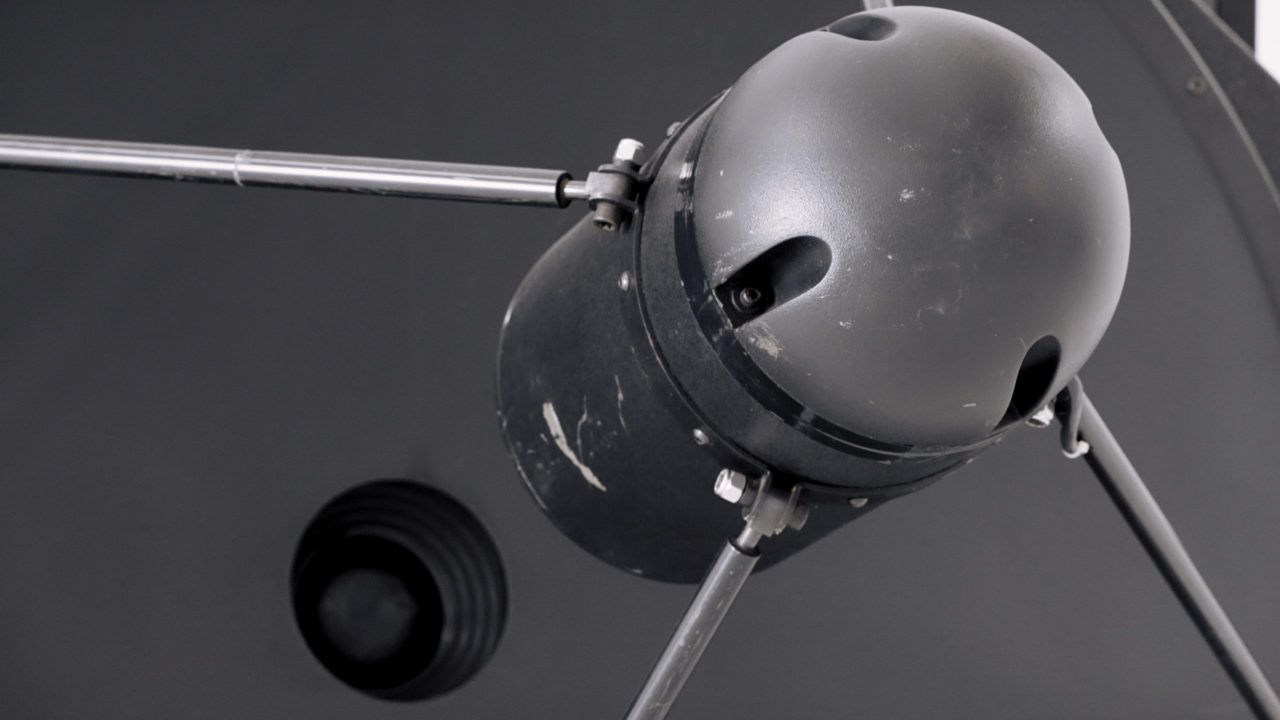 The work he showed, A, was a precursor to the immersive, sculptural version he presents at his current RYOJI IKEDA immersive exhibit at 180 Studios, A [continuum].

In A [continuum] Ikeda scales up the concept, assembling six towering Meyer Sound SB-1 Parabolic Sound Beam speakers with the power to emit low-distortion sound throughout sprawling stadiums and arenas.

Moving between the speakers, the frequencies compete with and supplement each other. The ominous presence of the speakers themselves, which bear a passing resemblance to sonic weaponry such as the Long Range Acoustic Device (LRAD) – a sound cannon used for crowd control – also transforms the aesthetics of the space beyond its aural realms.

Of their retro design, Ikeda admits, “[Meyer Sound] still produce a similar one, but it’s more hi-tech, it’s not that interesting looking. Of course the function of their directional character is very important, but it’s such a photogenic object!” 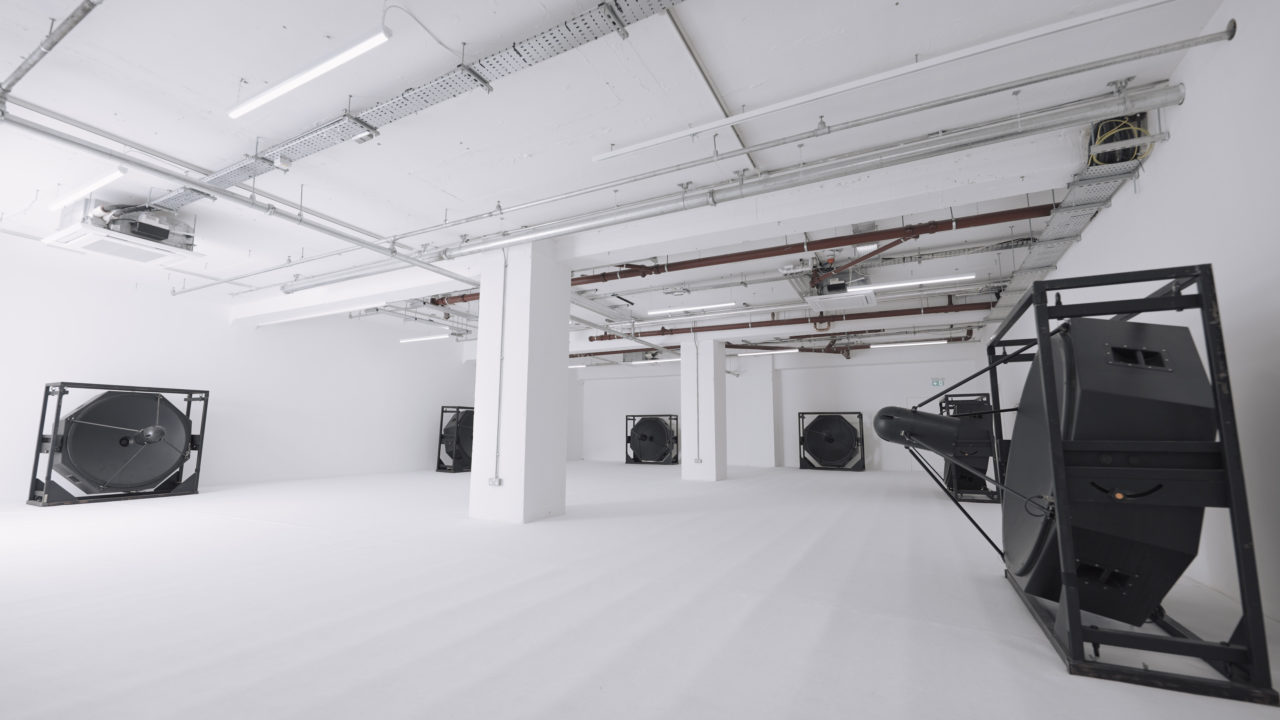 Bringing the concept full circle, Ikeda applies sound overlap at various moments throughout the exhibition – a unique effect of the staging and curation of the show.

“In the group show, managing sound bleed can be very difficult,” he explains, “but in a solo show it’s nice to have a mix of soundscapes that you can hear at the same time. I can even recompose soundtracks of different works so they work better together. It’s a fantastic opportunity. ”