By Chris May in Exhibitions, Features November 9, 2017

Roy DeCarava was a jazz photographer, artist and Harlem local who captured everyday life in the Manhattan district like no-one else. Through a spare, striking use of natural light, DeCarava’s exploration of the aesthetics of blackness was revolutionary, developing a visual mode that challenged the era’s cultural assumptions around race, poverty and artistic representation.

Taking DeCarava’s legacy into contemporary America, film-maker and artist Kahlil Joseph has channelled this approach into work with Flying Lotus, Beyoncé, Kendrick Lamar and Sampha in recent years. Now he has collaborated with DeCarava’s estate to craft the new VF-commissioned work Fly Paper, a vision of Harlem soundtracked by Kelsey Lu and Lauryn Hill, making its UK debut as part of Strange Days: Memories of the Future at The Store X, 180 The Strand, London. Chris May traces the oft-overlooked career of this most radical and influential of artists.

In 1958, when Columbia Records commissioned Roy DeCarava to shoot the cover photograph for Miles Davis’s Porgy and Bess, most sleeve photographers opted for one of two prevailing clichés: a flattering studio portrait or an intense performance shot. But DeCarava wanted something out of the ordinary. The story goes that he pitched up unannounced at Davis’s brownstone, to prevent Davis giving too much preparatory thought to the image. Once inside, DeCarava took an informal photograph of Davis sitting next to his girlfriend, the dancer Frances Taylor, in the backyard. Neither of their heads or faces are in the frame. Instead the viewer’s gaze is directed towards Taylor reaching out with her left hand to caress the trumpet Davis is holding on his lap. Intimate and sensual, DeCarava’s shot perfectly captures the atmosphere of George Gershwin’s opera as interpreted by Davis. 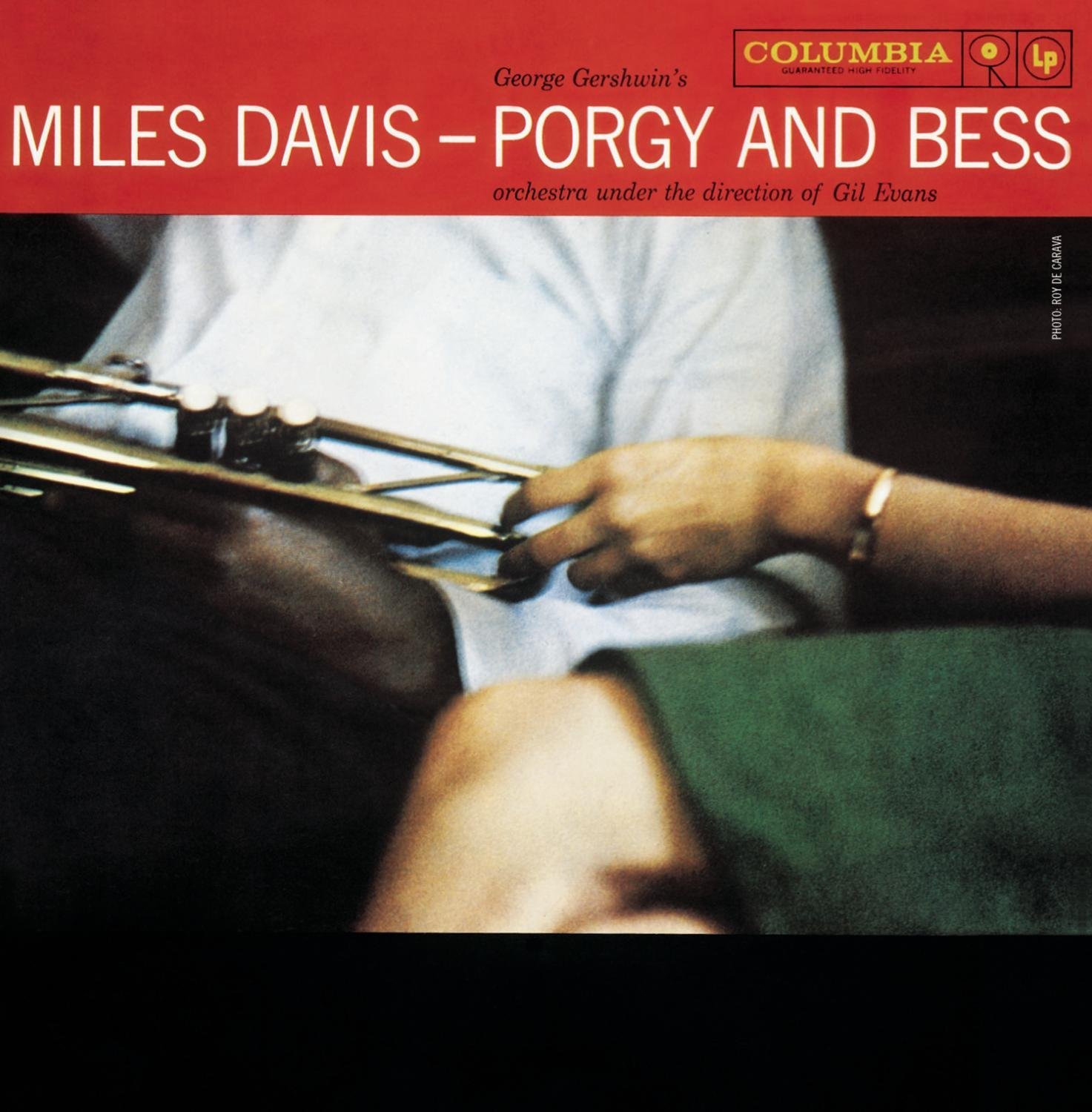 Whatever the precise circumstances of the Porgy and Bess shoot, the image is illustrative of DeCarava’s idiosyncratic approach to his work. His much fêted collection of jazz photography, The Sound I Saw – an enduring mid-20th century masterpiece – features shots he took in and around Harlem in the late 1950s and early 1960s. Other talented photographers were then patrolling the same beat, but DeCarava’s approach stands apart. The featured musicians – spanning famous, soon-to-be famous and lesser known names – are variously portrayed onstage, backstage or just hanging out. But they form only part of the book. Their photographs are interspersed with shots of their wives and children, their apartments, the views from their windows, middle-distance shots of passers-by walking down the street – the everyday milieu in which the musicians led their lives.

DeCarava’s contextualizing of his subjects adds a depth of meaning rarely found in jazz photography, and it gives his work a power which continues to inspire photographers and film-makers today. But it also fosters the false notion that DeCarava was, first and foremost, a documentary photographer with a social-realist aesthetic. In fact, he deserves to be judged as – and considered himself to be – an art photographer. He rejected the contemporary idea that black people in America were unpromising subjects for art, suited to be portrayed only as caricatures or social problems, and that their depiction should serve either as a lesson in history or an instrument of social change.

“I’m not a documentarian, I never have been,” said DeCarava in a 1990 interview. “I think of myself as poetic, a maker of visions, dreams – and a few nightmares.” 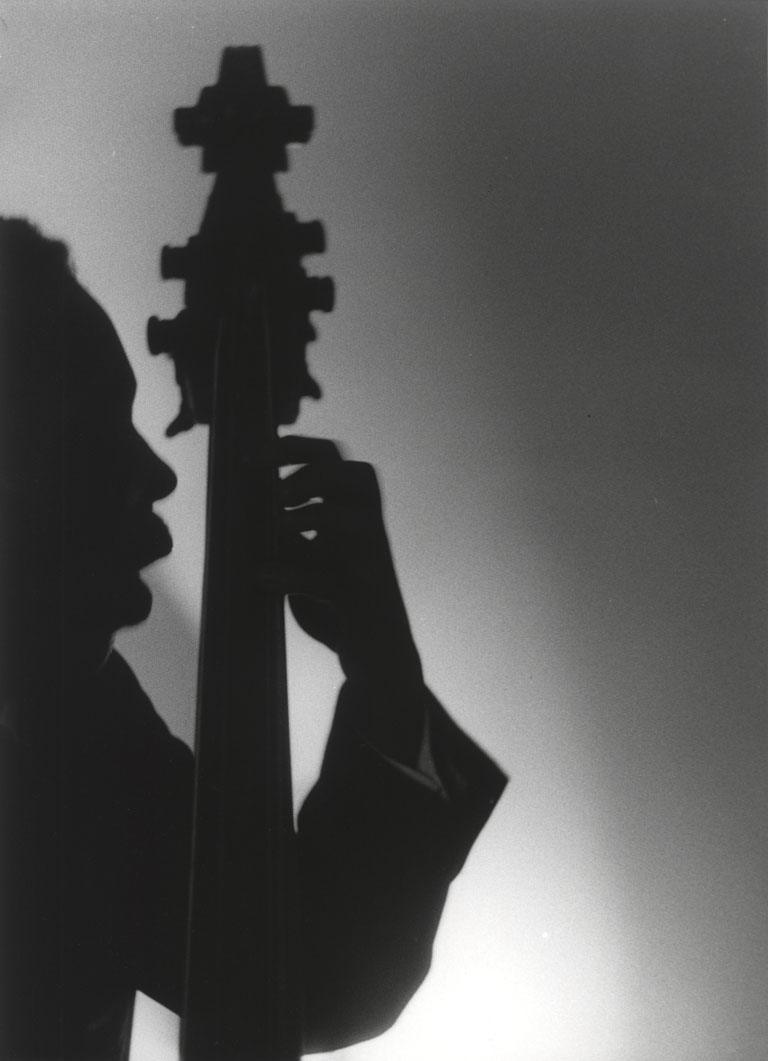 DeCarava was born in Harlem in 1919. After leaving high school, he won a place at New York’s Cooper Union School of Art, where he trained to be a painter. After two years, he moved to the Harlem Community Art Center (HCAC), where he redirected his energies towards photography. It was an auspicious move – at HCAC, DeCarava met the writer Langston Hughes, with whom he would later collaborate on his first book, the widely acclaimed The Sweet Flypaper of Life.

In 1950, DeCarava’s photographs came to the attention of Edward Steichen, the director of the Department of Photography at New York’s Museum of Modern Art (MoMA). At Steichen’s urging, DeCarava successfully applied for a grant from the prestigious Guggenheim foundation. In his application, he said that he wanted to devote a year to photographing Harlem and its people “morning, noon, night, at work, going to work, coming home from work, at play, in the streets, talking, kidding, laughing, in the home, in the playgrounds, in the schools, bars, stores, libraries, beauty parlours, churches, etc…[But] I do not want to make a documentary or sociological statement. I want a creative expression.”

In 1954, DeCarava and Langston Hughes teamed up to produce The Sweet Flypaper of Life, which was published the following year. The book featured a selection of DeCarava’s Guggenheim-funded photographs accompanied by a fictionalized narrative written by Hughes. Encouraged by its success, DeCarava began putting The Sound I Saw together in 1956, although the book was not published in its finished form until 2001. 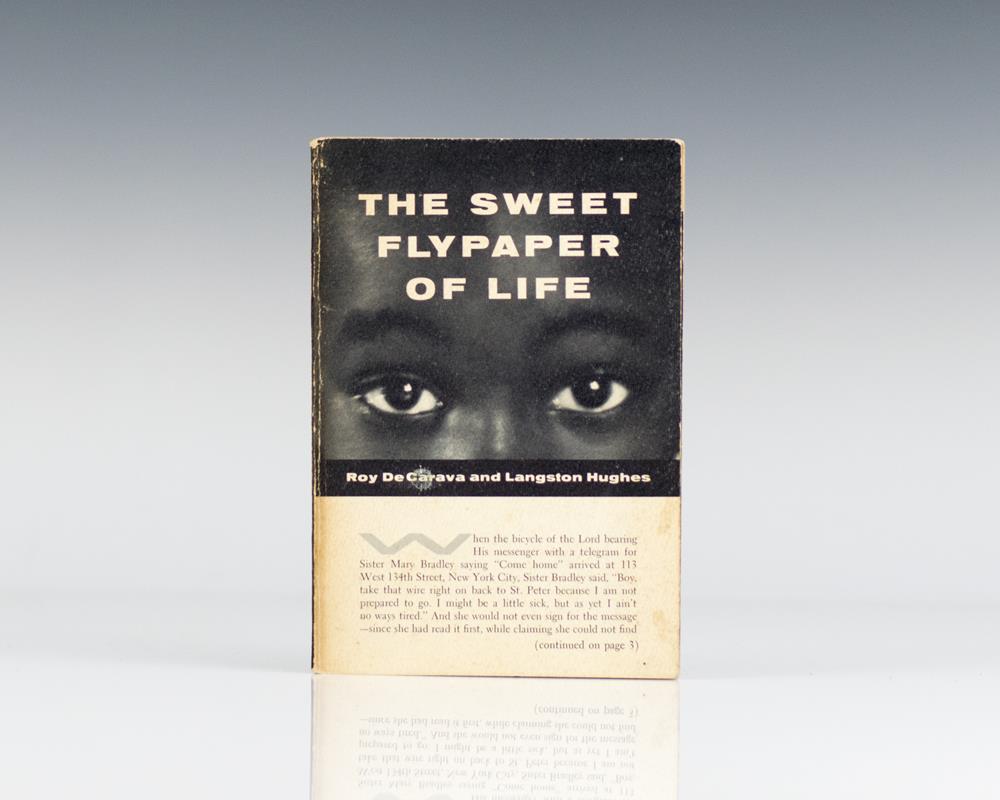 It was while shooting The Sweet Flypaper of Life and The Sound I Saw that DeCarava perfected the two core signatures of his style – the use of available light rather than flash and an embrace of the dark tones that often resulted from that choice. In 1990, he talked about this approach in an interview with Ivor Miller published by the John Hopkins University Press. “I don’t try to alter light, which is why I never use flash,” said DeCarava. “I hate it with a passion because it obliterates what I saw. When I fall in love with something I see, when something interests me, it interests me in the context of the light that it’s in. So why should I try to change the light and what I see, to get this ‘perfect’ information-laden print? I don’t care about that. The reason why my photographs are so dark is that I take photographs everywhere, light or not. If I can see it, I will take a picture of it. If it’s dark, so be it. I take things as I find them because that’s the way I am and that’s the way I like them. When I went to a jazz club it wasn’t lit up like a T.V. studio. It was dark. I accept that.” 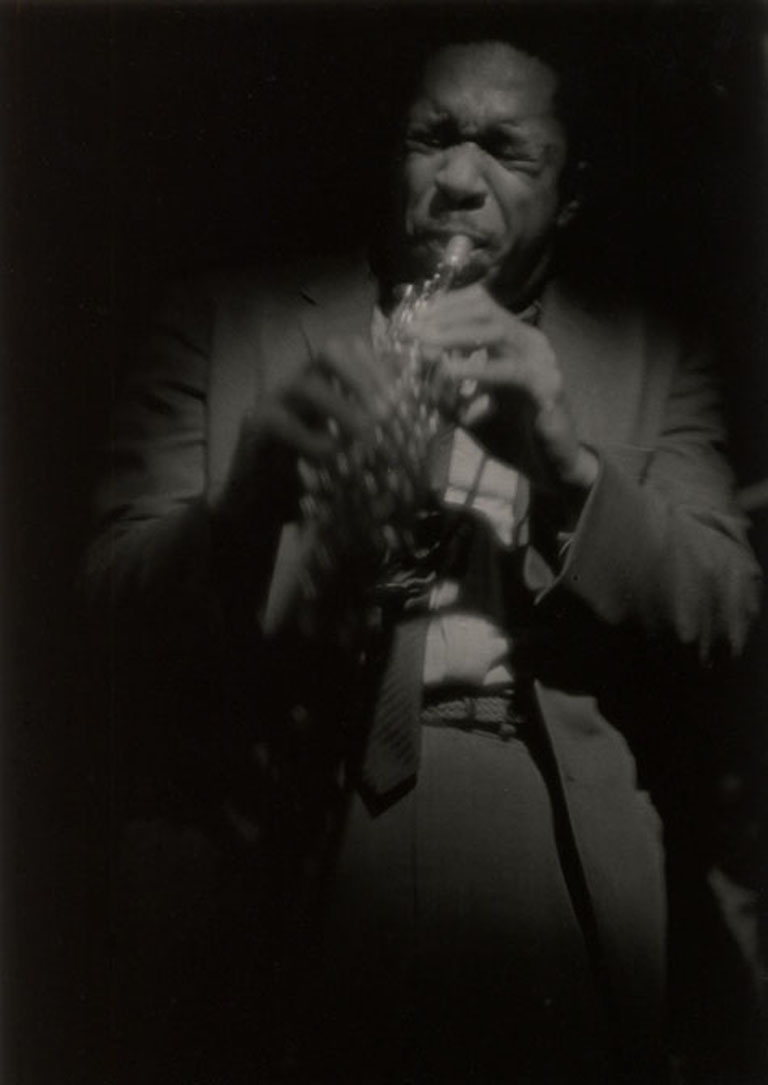 Later in the same interview, DeCarava said that the use of darker tones could be interpreted as conscious opposition to the values imposed on American society by European tradition – and the resulting sidelining of black culture. “I get a little angry,” he said, “with some of my friends who insist that I listen to classical music because it is really music, or that I listen to opera because it is the truth. I say this is simply a European perception. There are other perceptions in the world about music. I happen to find opera very simplistic. I find classical music very rigid, needing almost a slave and master relationship to make music. The conductor is the master, the musicians are the tools with which he forges someone else’s music; they do what he wants them to do. To me, the idea of jazz, the right and the need of the individual to express his uniqueness, which is what jazz, and even folk music is about, is also music. I resent the idea that classical music is the only music and that therefore I am suspect, I’m not quite civilized, if I don’t embrace it.” 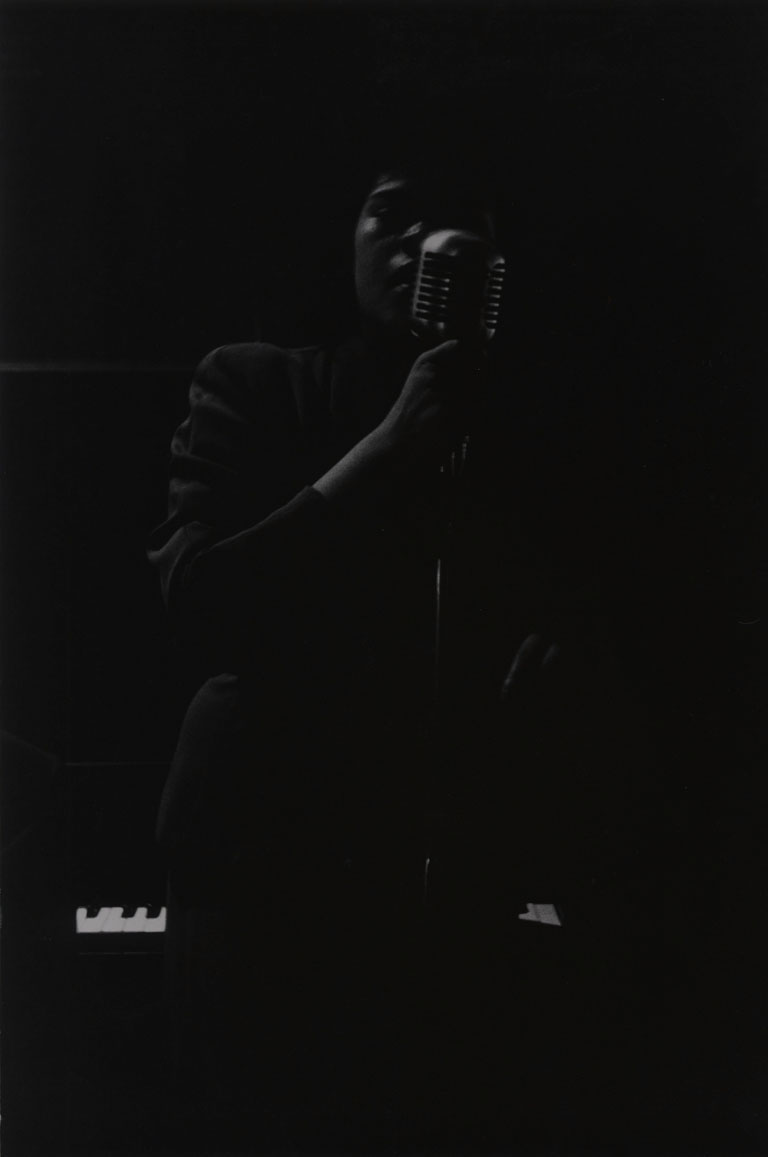 In 1996, MoMA mounted a retrospective of DeCarava’s work. For an American photographer, a MoMA exhibition is the ultimate art-establishment seal of approval. The recognition had been hard won. Only six years earlier, DeCarava said to Ivor Miller: “I will never get credit, I think, for my ability as a photographer. [They say] I’m black first, which puts me in another category. I don’t know how many times I’ve been called ‘one of the great black photographers,’ but that’s not as good as a plain white photographer.”

“[The MoMA exhibition] was accomplished by the dint of many dedicated individuals, some from outside the normal museum curatorial structure, as well as by the feeling that ‘the time had come’ from the context of a broad artistic truth,” says Sherry DeCarava, an art historian Roy married in 1971.

“Roy set a standard for excellence that remains unmatched. Yet in the 21 years since, despite the collective best efforts of supporters and friends, he has not had a book published or a major solo exhibition. This has remained an enduring frustration even as his work continues to speak to who we are as human beings and continues to inspire generations of artists. The hands of museum directors, publishers and curators are completely clean. Don’t you find this odd? As an observer, I do.” 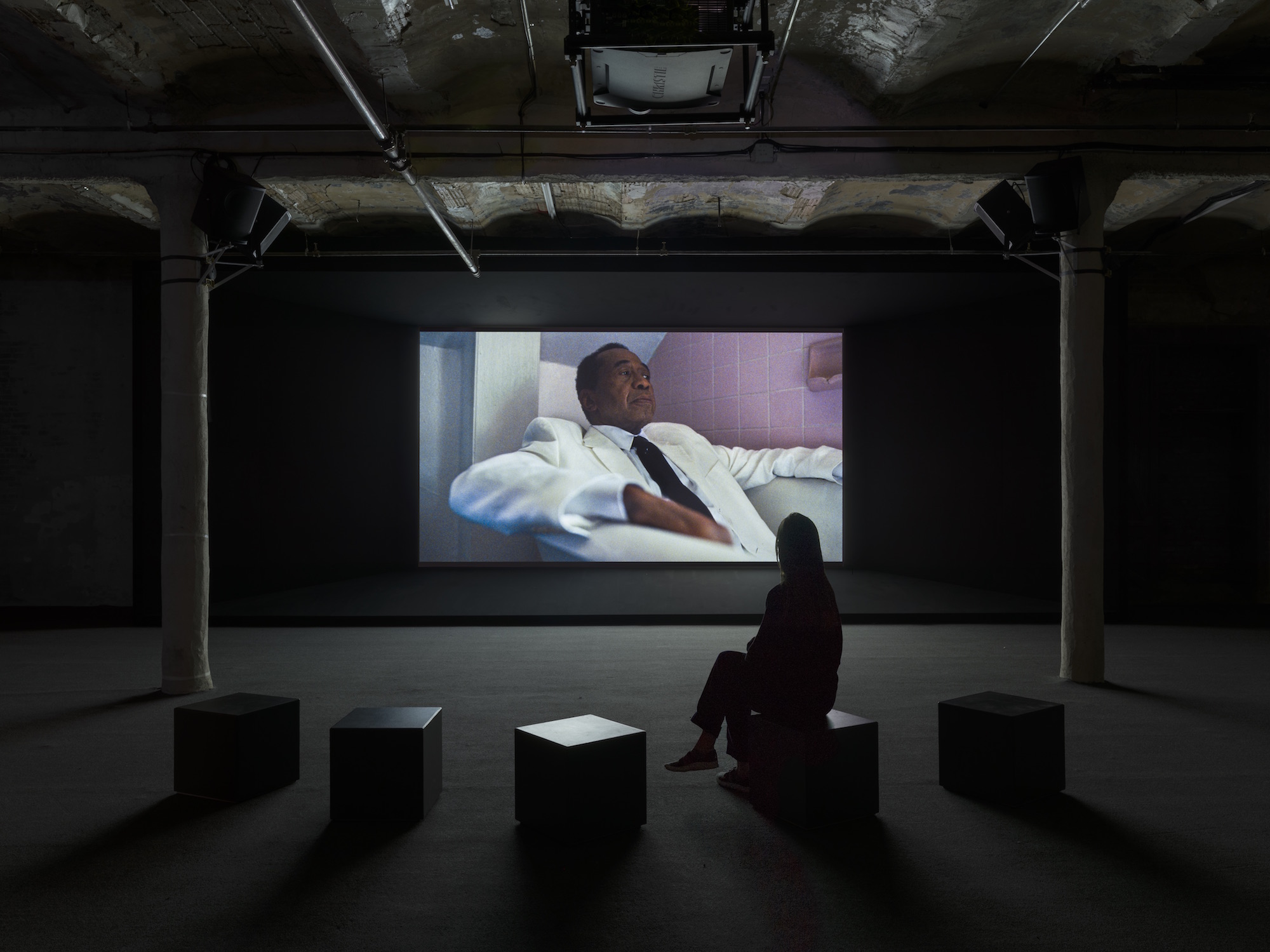 As Sherry says, Roy DeCarava’s legacy resonates strongly with new generations of photographers and film-makers. Kahlil Joseph’s film Fly Paper pays explicit homage to the title and overall aesthetic of The Sweet Flypaper of Life. The film also references some of DeCarava’s most striking images – its depiction of dancers Storyboard P and Ben Vereen, for instance, is clearly inspired by DeCarava’s 1956 photograph “Dancers”.

Joseph also acknowledges a debt to DeCarava’s rejection of documentarian and social-realist values. In an interview with the New York Times about Fly Paper Joseph said, “I wanted people to feel like they saw a Harlem that they can’t see. You can take a tour bus around Harlem and see the exterior.”

“The truth of Roy DeCarava is carried from hand to hand and heart to heart,” says Sherry DeCarava, “despite the fact that so much of his work remains unpublished and all of his books are out of print. The world needs Roy DeCarava so we may better understand beauty and justice as an undivided expression. The recognition and mystery of that experience is where we find ourselves, reflected through the lens of his artwork.”

Kahlil Joseph’s Fly Paper is being shown as part of his Shadow Play exhibition at New Museum in New York. Open until 7th January 2018, click here to find out more.