The latest release in a long-standing relationship between the great dub astronaut and On-U Sound founder Adrian Sherwood, Rainford is Lee “Scratch” Perry’s most sophisticated, personal and politically prescient album in years. David Katz met them both to hear about its creation.

“It’s called Rainford, because we cannot survive without the rain. The sun, moon, stars, the sky and the firmament, the earth, trees, plants and flowers, everything owned by the rain. So it’s a good album, because Adrian’s thinking perfect if him think it’s rain.”

Lee ‘Scratch’ Perry is waxing lyrical on his new album, Rainford, an impish grin shining beneath his Day-Glo beard. It’s the latest instalment in a series of collaborative works produced with the inventive British producer, Adrian Sherwood, and easily his best set since their last joint effort, The Mighty Upsetter, released by On-U Sound in 2008. 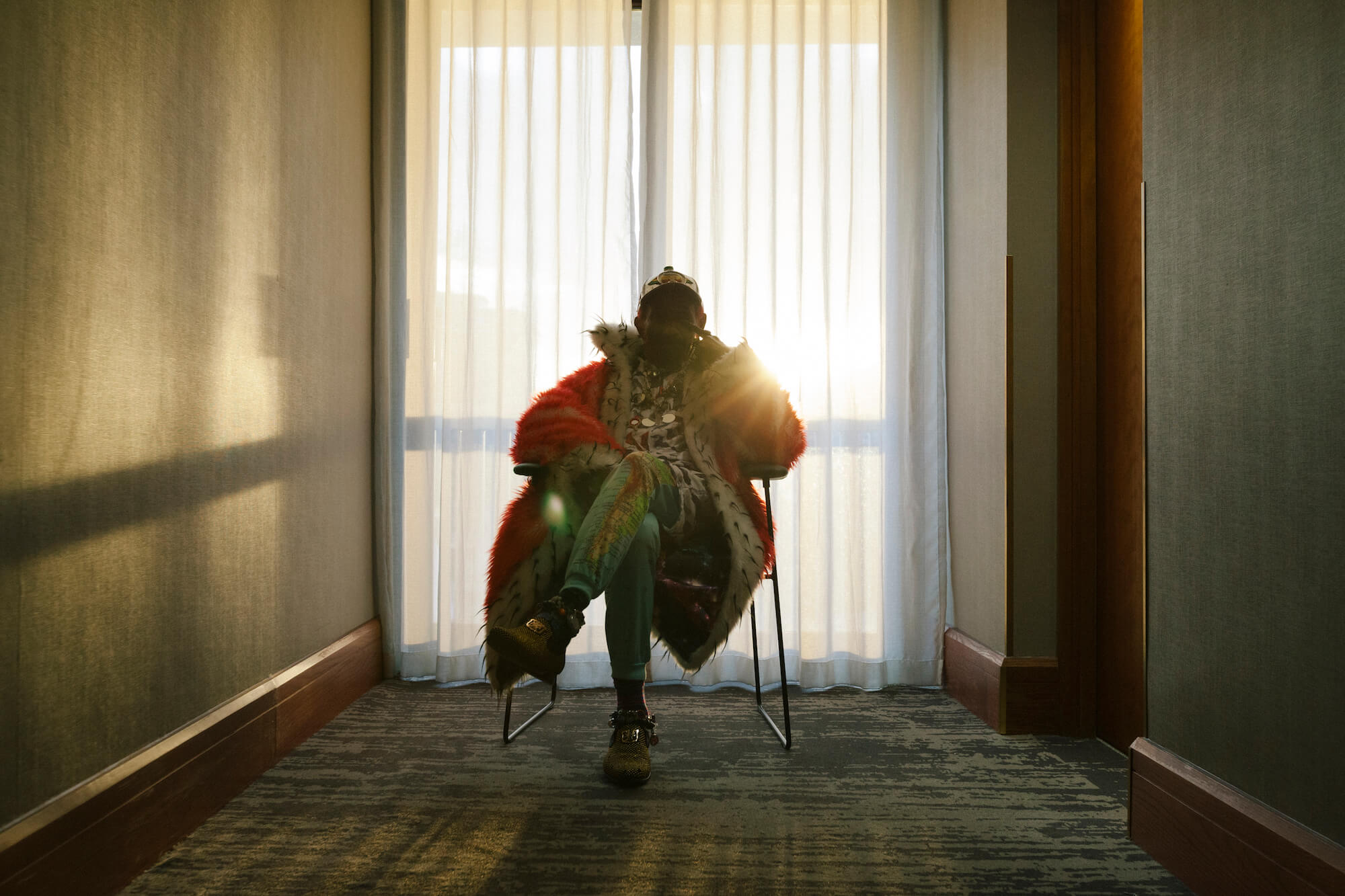 As he bounces around his hotel room with the energy of an adolescent, his corpuscular frame on par with a man half his age, it’s hard to fathom that Perry is already 83 years old. He still maintains a punishing touring schedule that has seen him perpetually crossing the Atlantic for Stateside gigs with Subatomic Sound, and European jaunts with his newly-installed French backing band, Easy Riddim Maker. His downtime is split between extended stays in his native Jamaica and longer spells at the home he shares in the Swiss mountains with his wife and manager, Mireille. 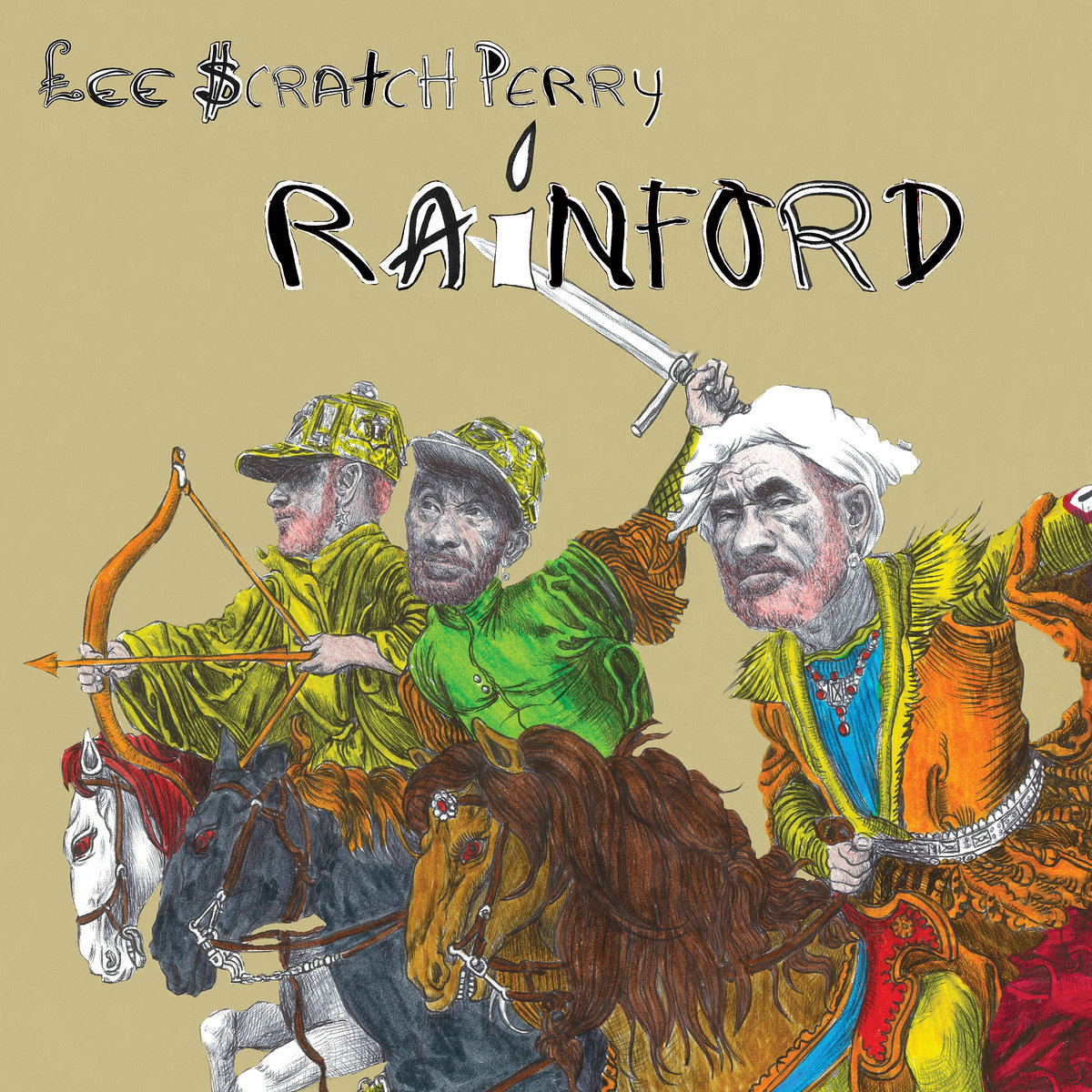 Draping necklaces and amulets around the bedside reading lamps, Perry grumbles lightly of living out of a suitcase — more of a large trolley overstuffed with magic implements — but one gets the sense he wouldn’t have it any other way. His nomadic journey started in the late 1960s when ‘Return of Django’ hit the British pop charts, and intensified after the destruction of his Black Ark studio in the early ‘80s.

He has since cut albums of varying quality with all manner of collaborators across the globe, but as the quantity increases every year, enabled by never-ending requests on social media, quality-control has suffered. 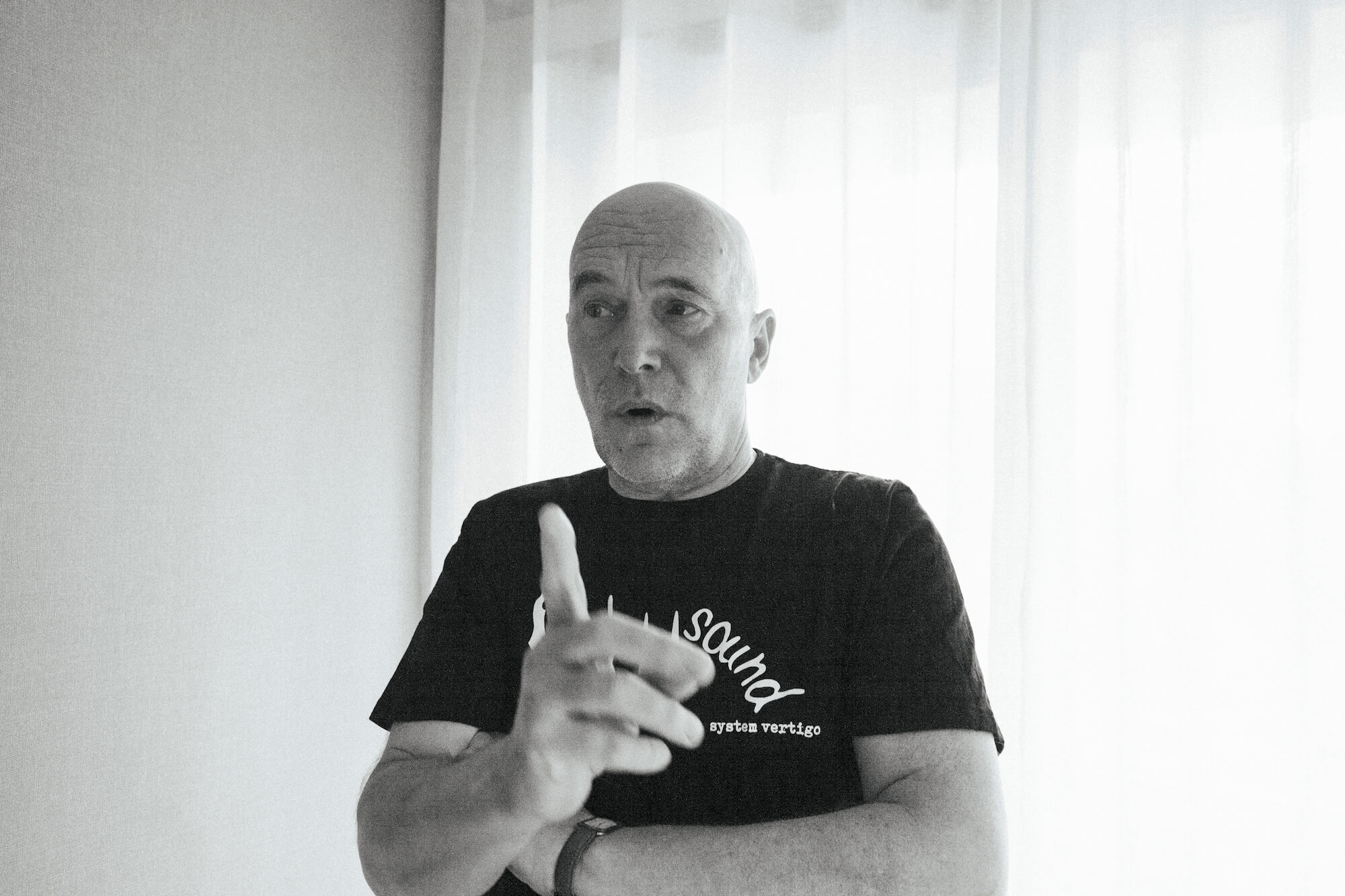 “I don’t blame people if fanboys and fangirls want to make a record with the great man,” says Sherwood. “But Lee and the family said, ‘Why don’t we do another record together?’ And for me, I just wanted to prove a point and make a really good record, so I got him involved. And I think it’s an album that people will have to play quite a few times before they get it.”

Put together over several years in Jamaica, England and Brazil, Rainford has plenty of On-U hallmarks: sounds which are hard-to-identify and an overarching feeling of futurism. For instance, the playful opening track, ‘Cricket On The Moon,’ has a minimal backing with a wah-wah guitar hook, a stealthy bass line and heavily processed drums beneath Perry’s stream-of-consciousness vocals.

“I’d been experimenting with stretched tuning,” Sherwood reveals, “so it was stretched tuning and bent-up bits of noise on ‘Cricket On The Moon’ and on the ‘African Starship’ tune as well. It’s live performance all through the whole record, with Crucial Tony and George Oban – and then some of the drums, bits are programmed and then readjusted. With ‘Cricket On The Moon,’ it is him [Perry] and me at one o’clock in the morning after a thunderstorm, stood outside his and Mireille’s place in Negril; all the crickets are making noise, and he starts off.” 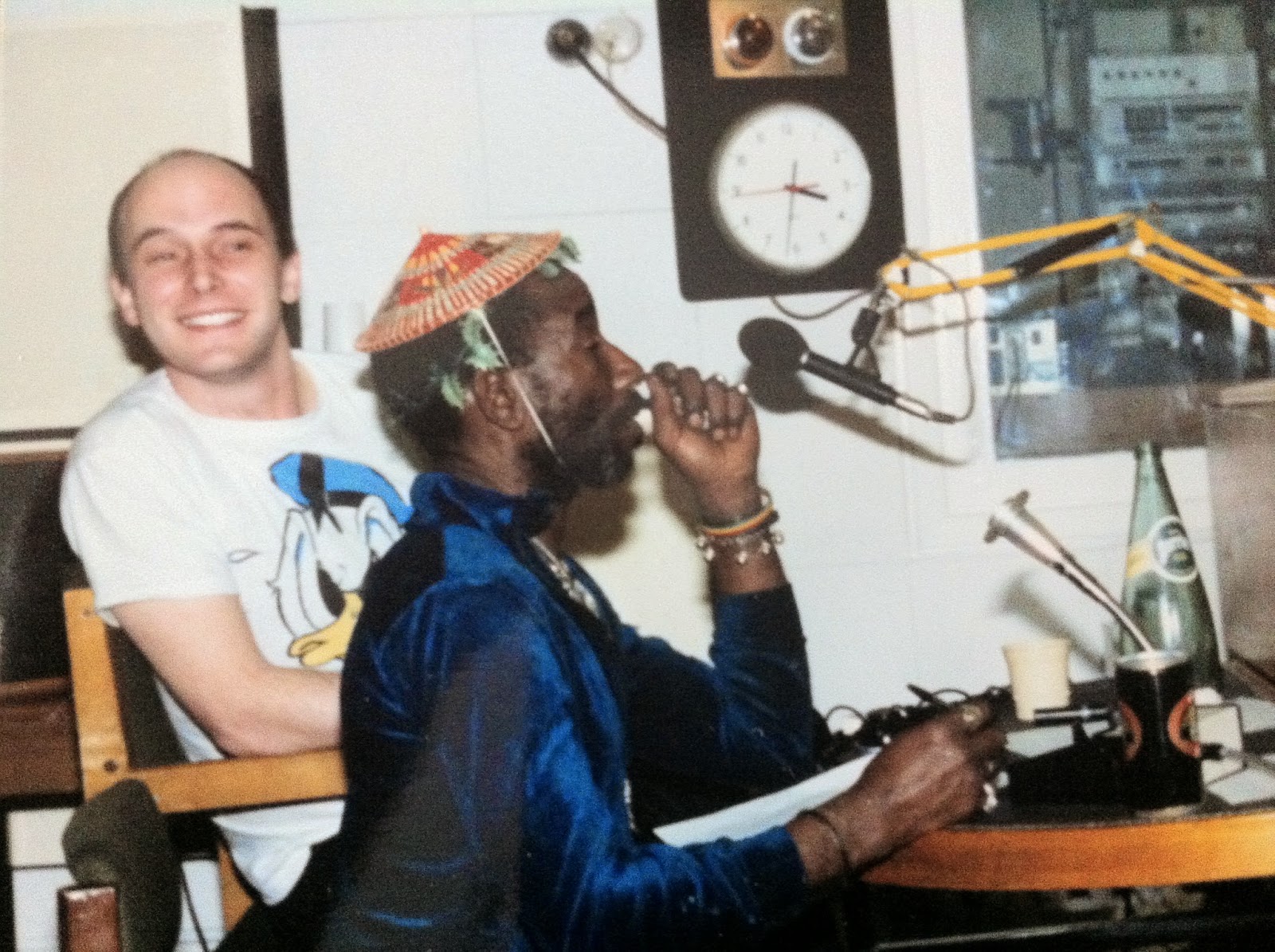 In contrast, certain tracks make subtle reference to Perry’s back catalogue. For instance, ‘Run Evil Spirit’ vamps on a new cut of the hook from Perry’s 1977 single, ‘Bionic Rats’, here led by saxophonist Paul Booth from Steve Winwood’s touring band. ‘Macumba Rock’ sounds like it was influenced by a Jackie Mittoo organ track from Studio One, though Sherwood explains that the latter was actually the international audio jigsaw that kicked off the entire project.

“I started that ten years ago when I went to Brazil and was working with a wonderful female percussionist called Simone Soul at her studio in Sao Paulo, and then I put Style Scott and Doug Wimbish on it in England. About 4 or 5 years after, I got Lee on the rhythm, so that became the starting point for the record and that set the yardstick for it. I’d just got my hands on a Langevin, the King Tubby’s-type of EQ thing – and I completely mangled it, just to make something leap out of the speakers. It has a complete edge with feedback and distortion.” 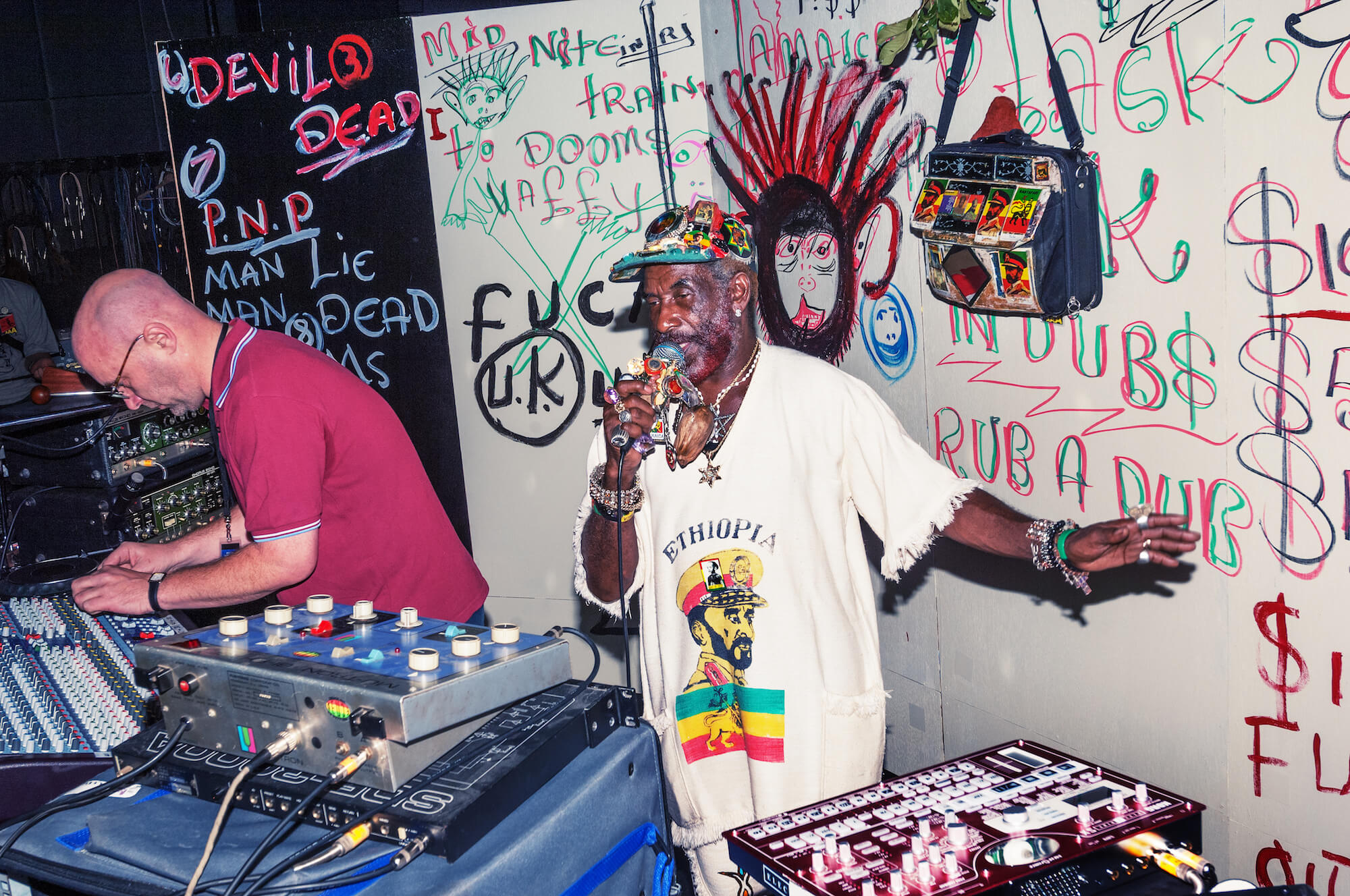 One of the more intriguing tracks in terms of subject matter is ‘Kill Them Dreams Moneyworshippers’, in which President Perry attacks the rampant greed underpinning our terrible present, from the grotesque ghoul in the Whitehouse to the fallacy of Brexit.

“It’s so fitting for now, the whole kind of capitalist nightmare we’re going through,” Sherwood suggests. “And on this album, when he [Perry] keeps referring to the undead, he’s meaning we are the undead, because we’re alive, but there are people around who are dead in spirit; he doesn’t mean the undead as zombies.”

The album’s title, Rainford, is taken from Perry’s actual given name, born Rainford Hugh Perry in the remote town of Kendal, northwest Jamaica, in 1936. The album’s stunning closing number, ‘Autobiography of the Upsetter’, provides a rare glimpse into aspects of his early life, furthering the On-U Autobiographies recorded in the 1980s with reggae heroes Mikey Dread and Prince Far I.

“The angel always go to the mother and tell the mother the name of the reincarnation of who’s coming next, because it’s not the first time I have been here,” says Perry of the album title and its relation to his given name. “So the angel must have tell the mother that me coming back as the rain. Otherwise you could say, come back as flood, or coming in the blood, or in the mud, right? They always send a message to the mother with what the baby name, so the baby is Rain. And she loved special names: she love Rain, she love Lee, she love Ford, so she was a perfect woman, because Ford is the biggest thing in computers and magnets and machines, like Ford cars, and Ford is also a flood. The mother give me a good name, a positive name, a perfect name, and make me survive.”

“Him voicing that track [‘Autobiography of the Upsetter’] was very moving,” says Sherwood. “He’s not necessarily always that easy about conveying emotional feelings and he’s not so sentimental regarding life and death, but he talks about when he came to London in the ‘80s and he met myself, Mad Professor, Steve Barker and everybody. He bigs up my ex-wife Kishi and Bim Sherman and Prince Far I, and when he said that, it sent a shiver up my spine. I wanted to try to get the serious side and the mischievous side of Lee, but not the ridiculous side, and by going into the things like the autobiography, I wanted it to sound like the most intimate and personal record, with Lee’s voice right in your face, so the voices are unnaturally louder than usual. On the album in general, I just started morphing stuff together from Lee’s background and then nicked bits of things to make an interesting sonic; that was what I was aiming for.” 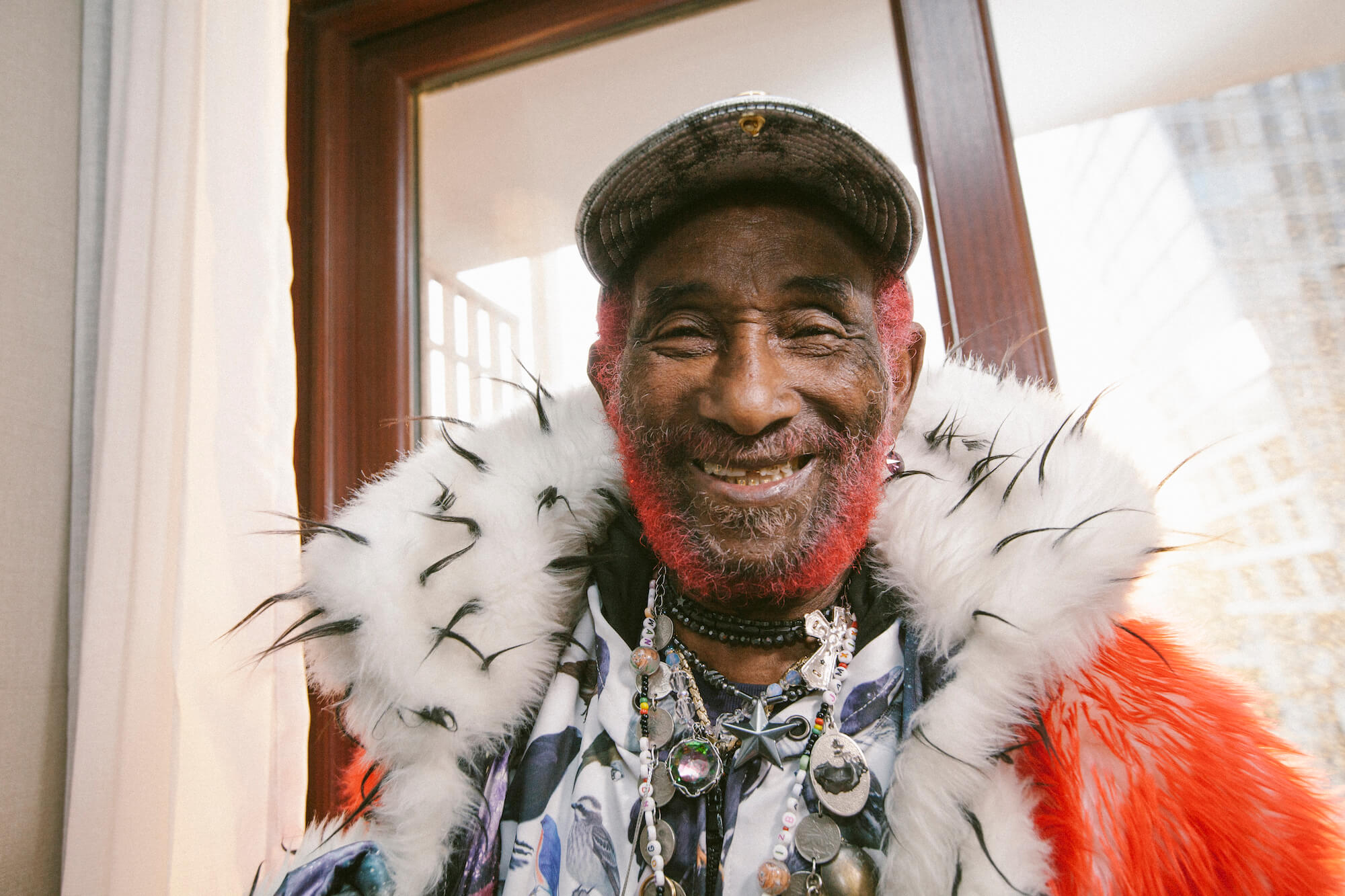 “Adrian’s a smart fellow,” Perry emphasizes. “Him white, but him think black. And he’s not a bad-minded person neither. So me choose good-minded people to work with, people with scientifical mind, educational brain, arts and craft, because he’s a scientist, doing music science and music obeah. The album was a display of some magical vibration like curse and healing. I like the album, because me speak my mind, talk what me want to talk and speak the truth; there’s nothing funny about it. I talk about how people funny and we’re supposed to love one another but we can’t love one another because we’re too grudgeful. Individually, people don’t want nothing else but what the other man have and the Devil makes them, because the Devil copy and make people too. The Devil want to be God, so the Devil form a gang with gangsters, killers, murderers, thieves and fakes to trick the wise people. But most of the people, it’s not God make them, it’s the Devil make them.”

Ultimately, Rainford’s dense textures evidence extra layers of care and audio dexterity, rendering it several cuts above the average Perry release. It is thus entirely in keeping with Time Boom, From The Secret Laboratory and The Mighty Upsetter, the previous On-U album outings that comprise some of Perry’s greatest post-Ark work.

“Sometimes you can hear where somebody’s trying for something magnificent and even if it fails a bit, you’ll like the charm quality,” Sherwood suggests. “But if it’s just more of the same, I’d rather give up. All the people who made records with him are fans of his and I’m a fan of his as well, so I wanted to do this for me as much as for him; hopefully it will stand the test of time.” 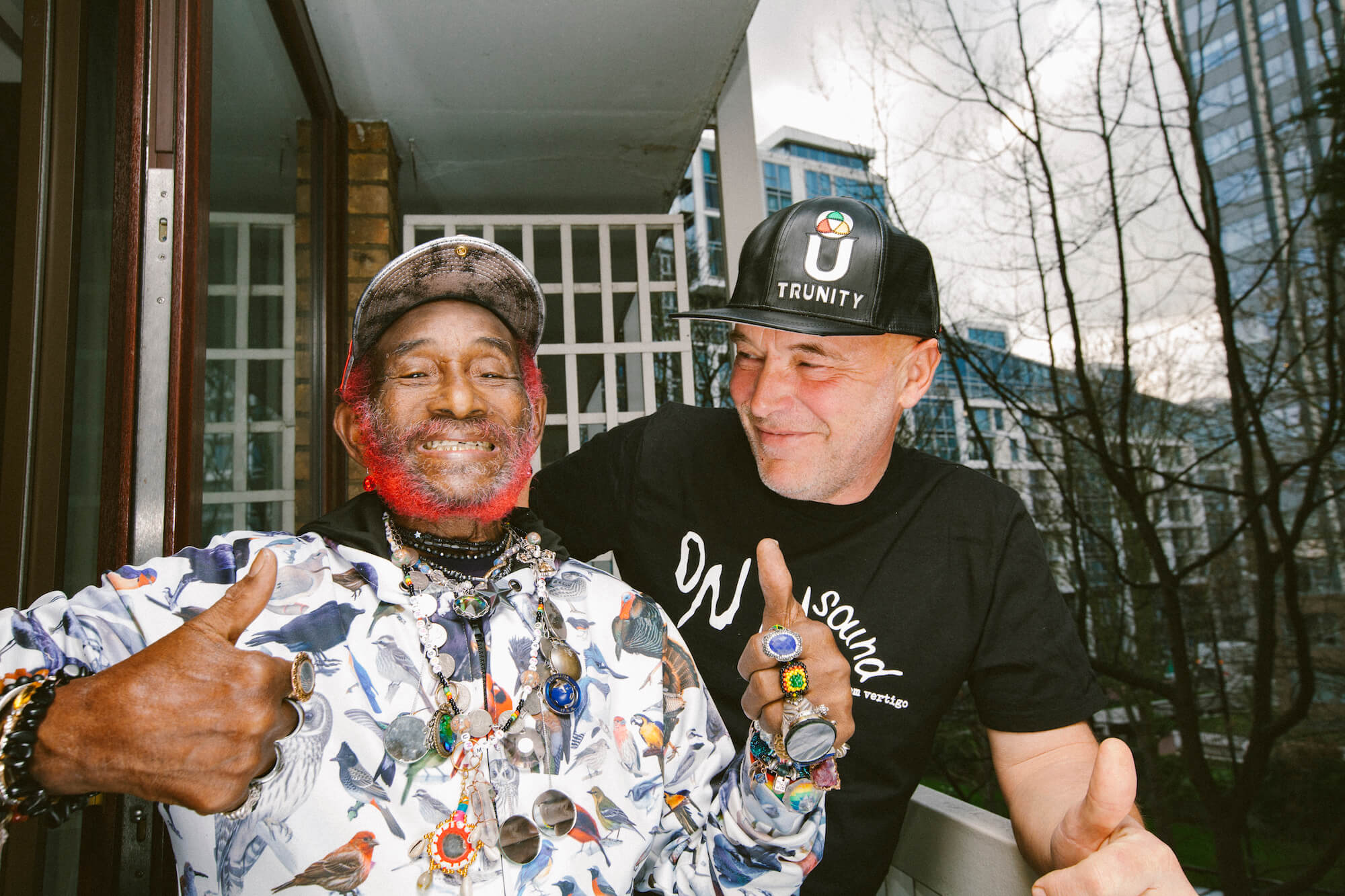 Rainford is released by On-U Sound on 31st May.

The best dance records of the month (May)