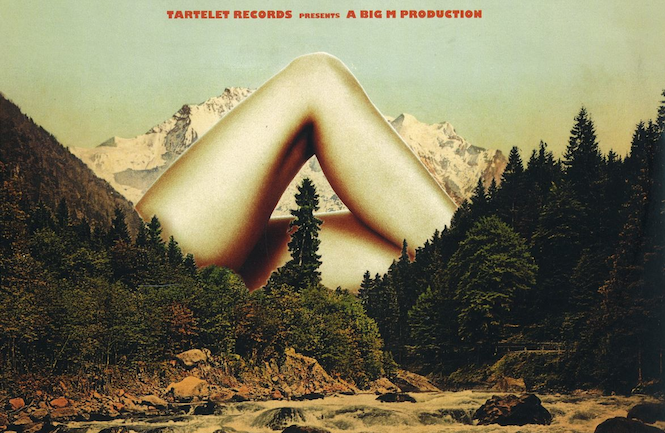 We continue our monthly illumination of the world’s best vinyl labels with Copenhagen standout Tartelet Records. Ambassadors of off-kilter house and hazy soul, Emil Nyholm gives us the lowdown on the Tartelet operation. Tomas Barfod and Frederik Bille Brahe founded Tartelet in 2007, but Tomas left after a few years to focus on his music career.

Frederik and I [Emil Nyholm] own the label – even though Frederik doesn’t take part in daily operations anymore, he is still one of the founding fathers. Frederik gave up music to become a chef and now owns a restaurant in Copenhagen.

The label came to life after a string of parties and was meant to be a platform for our own and friends’ productions. For the first couple of years it was a complete mess, we owed money everywhere and were clueless on how to run a record label. It was all about fun and parties.

Eventually the creditors caught up with us wanting their money, and so we decided to get it together and give the music business a try. The name Tartelet was suggested by our friend Silas “Soulland” (Danish clothing designer) on a night out. It was actually meant as joke; “tarteletter” is a dish consisting of slimy chicken and asparagus served in dry pastry. This record put BBF on the map and is, in my opinion, one of their best releases to date. It came out in the middle of the ‘minimal era’ where everything was stripped down and sounded like plastic. While also being minimal in a sense, it stood out a mile with its analogue sound, classical composition and live feel. There really wasn’t anything like it at the time.

The video for ‘BOP’ produced by Daniel Brandt is extraordinary, watch it here.

We were supposed to release their debut album but didn’t have money at the time, so they went on to sign with !K7. This still haunts my dreams. When I met Max, he was a humble and chronically broke teenage kid, who loved drinking beer on Tuesday afternoons. He also happened to be one of the most creative and productive producers I had ever met. It was crazy what Max could bang out in a day – several tracks, different styles, complex arrangements and it had this wonderful, unexpected vintage sound.

So I asked if he would be interested in producing an album for Tartelet, which to be honest wasn’t doing great at the time. I was lacking quality material to release and sales were slow.

Shortly before, Wayne Snow had relocated to Berlin from Paris, and somehow found Max through mutual friends. I’m not sure if it was luck, fate or just perfect timing, but Wayne brought the last ingredient to make a perfect stew.

I was listening to the album for months selecting tracks with Max, we both sensed it was something special but never expected it would become as successful as it did – to be honest I wasn’t sure if people would be into it.

Needless to say, the album is our biggest success so far and, moreover, it gave me the inspiration I needed to carry on with the label. Uffe and I had been working together for a few years prior to his debut album, first releasing an EP back in 2012. Since then Uffe had been sending in demos on and off, while he was living in Amsterdam studying at the Academy of Fine Arts. It was a long process that didn’t really take form until I received a folder with “album” in the title. Uffe always had his own distinct style different to that of our other artists, more artsy and slightly poppy (with vocals).

At first listen, I thought, OK, this is interesting, but couldn’t figure out if it was what I was looking for. I mean it had not one but several ballads. After listening a few times I suddenly understood where he was going – and I’ve been crazy about the album ever since. It’s very bold and a big middle finger to following the norms of dance music and doing the expected.

Uffe is more than capable of producing dance floor hits (check out his release for Delusions of Grandeur), but I admire him for not choosing this approach for his album. It’s ballsy while also being a smart move to show his capabilities and standout from the crowd. Glenn is awesome in many ways, extraordinarily modest and very talented. The funny thing is that he has been around for years and has had several outstanding releases, but somehow managed to stay relatively under the radar until recently.(Check out his 2012 ‘Kdim’ release with IMYRMIND on Odd Socks).

Some compare Glenn Astro with Max Graef saying they sound alike or that Glenn sounds like Max. It’s actually the other way around; Max will tell you that originally Glenn inspired him. Nowadays inspiration goes both ways and they are currently working on an exciting project together.

Unless you know Glenn Astro you will not understand how personal and “Glenny” his debut album is. He is obviously a hip-hop head and Throwback pays respect to his musical upbringing, but it is also very much a personal album inspired by life and dedicated to his brother Viktor who tragically passed away some years ago.

Throwback is diverse in style and embraces many different moods; sometimes melancholic, then playful and uplifting, always groovy. It’s an album that continues to grow on me; I keep revisiting it and discovering new details every time.

I love debut albums because they are honest, it is a formative experience for the artist and there is nothing to live up to. You are not allowed this freedom twice and it’s hard to recreate the “feel” further down the career line. They might be better and more experienced musicians or producers, but this comes with expectations and self-awareness. Another 2015 signing is the Nu Guinea duo from Napoli, who are part of the fabulous Early Sounds label collective. Both guys have been active producers for years and had rather successful careers under different names but decided to leave it all behind and start over in Berlin.

They embrace the early ’80s sound; bright synths and machine drum programming. Their sense of groove is different to Max and Glenn, as they prefer straight quantised beats to wonky ones, and are heavily influenced by the African sound.

After hearing a few bits they’d done, I was keen to get in touch. Luckily my friend Federico knew them from Napoli, where they grew up together, and he made the introduction when they relocated to Berlin.

I was blown away by their exotic jazz-funk approach to house music and immediately asked them to produce something for the label. It ended up being a long process; the record was mastered three times and two different test pressings were made before everyone was happy with the result. Hopefully, there will be more coming from Nu Guinea in 2016 – an album would be great!

Vinyl has always been in focus and we put much time into artwork and packaging, even when vinyl wasn’t selling we continued to press and it almost ruined us. Without vinyl it wouldn’t be a record label it would be a music service or something…

It’s interesting how vinyl is making its way back because it contradicts the general trend of how music is consumed today. Yet somehow it makes sense as a counter phenomenon to digital where nothing is exclusive and everything is available to everyone.

For many artists it seems vinyl is the only legitimate format; if it’s not on vinyl it’s not a “real” release. To be honest, I don’t think sound has much to do with it, it’s more about vinyl being a physical product that you can see and touch and what it signals. It looks good on the shelf too.

At the moment about 8-10 contributing artists. Signing new artists often depends on luck and the help of other artists; someone will forward a demo or tell me about “this guy”… I usually don’t search, it just happens.

The decision to sign a new artist is always made on the basis of their music and whether it is a person I can work with. I prefer artists that are at an early stage in their career as it leaves more options to be explored.

Like our sound, this is something that has and will continue to develop over time. Until last year The Emperor of Antarctica made all the artwork, he’s really into crazy patterns and colours. Now we use freelancers; Nano Nansen did Glenn’s and Max’s album covers – he’s got that ’70s jazz vibe going that I really like.

I’m actually looking for a skilled graphic designer / art director, so feel free to send your portfolio to [email protected] There are plenty of great labels to admire and learn from. Motown for their catalogue, musical influence and history; Studio One for introducing the Jamaican sound to the world; Blue Note for jazz in all forms; XL Recordings for being independent and still reaching the top of the charts; and Brainfeeder for always doing cool shit.