A record that has grown in stature since its 1973 release, John Martyn’s Solid Air has become a cult touchstone, pointing the way towards ambient, trip-hop and more abstract sonic textures. Vivien Goldman remembers the man behind the masterpiece and explores its lasting legacy.

If you appreciate irony, you may have noticed that some of the most tortured souls – Marvin Gaye, for one – deliver music that deeply heals; maybe its very creation is self-medication. Such is the case with John Martyn’s pivotal 1973 LP, the revered Solid Air. Located at the same crossroad where Robert Johnson sold his soul to the Devil to play like he did, the dichotomy of Solid Air pointed to future directions, such as ambient and trip-hop, unusual for a product of the folk scene. 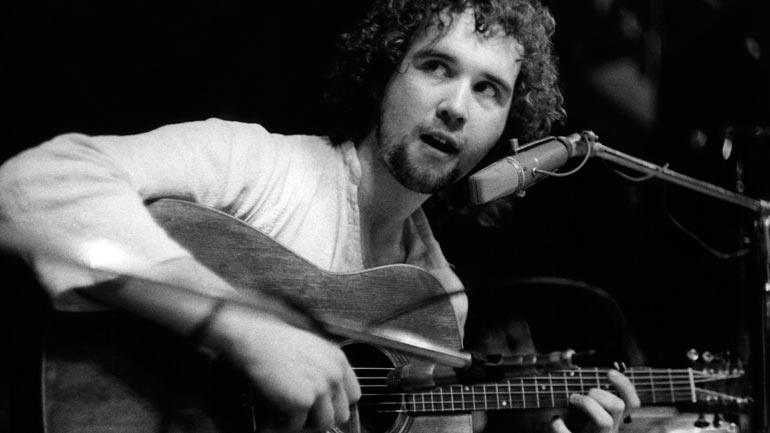 “Give me five bob, drop me on the A1 and I’ll be alright,” was John Martyn’s jaunty assessment of his survival skills, when I interviewed him for Sounds rock weekly in 1978. The mop-haired troubadour and myself had journeyed to Dublin for his one-man show; a young Bob Geldof in an oversize flasher’s raincoat, lurked among his admirers. It was prime punk time, but amidst all the howling, bashing throngs, respect was consistently given to John Martyn where other folkies were deemed irrelevant. Reason being that John was an audio shapeshifter; five years after the release of Solid Air, he was still able to replicate the contradictions of the title.

On stage he would transmute his solo entity into thunderous aural multitudes – a Niagara Falls of abstract sonic textures, which could bathe you and bend you like Jah Shaka’s thunderous dub at the reggae sound systems. Martyn’s continued “cool factor” was due in part to his deft deployment of the then still new-ish foot-controlled pedals, phasers and pedals to aerate and implode conventional guitar sounds.

And because, in his own way, it was well known that Martyn could be as mental as Sid Vicious. Maybe that’s because, like gangly, spotty, sorry old Sid, aka John Beverley, who never had much luck with the girls until he became a Sex Pistol, behind his angelic beam, John Martyn was also tormented and torn. Yet by the alchemy of art, he was able to articulate his insane yens and gibbering desires into the tenderest, most sensual music, that both uplifts and consoles.

That tough dichotomy may be why, four decades after Solid Air was released, there are still many troubled times when I find it’s the only tune I can turn to. The touchstone of all the tracks, including the title, is the balance between heavy and light, that gives the cover of bluesman Skip James’ ‘I’d Rather the Devil’ a tornado tension; ‘Over the Hill’ its wicked skip; and ‘May You Never’, such a feeling of benediction.

Despite Martyn’s quicksilver social cheer – his accent would slip and slide from a Goon, to a Russian spy, to a posh toff in seconds – he knew how to deal with his angst in the most constructive way possible – through music as organic as a crystal wave crashing on a beach untouched by humans. Much of his impact came from his deployment of Tristram Fry’s vibraphone and his “marriage” with the melodic, profound bass player, Danny Thompson. His bold plunges at the intro lay a marble foundation on ‘Go Down Easy’, upon which Martyn’s guitar filigree builds a floating palace. Thompson does a funky electric slide on ‘Dreams by the Sea’, on which Martyn, rather anomalously almost mates with mid-period Curtis Mayfield.

Recalling their time together, Thompson wrote to me, “It was “All from the Heart” stuff that had been lying dormant in me for years. We never discussed the music, he just sang his wonderful poems and accompanied with his unique guitar style. He just played me a song and left me free to serve. We were so close in everything we did together. I can’t talk about any specific album. For me it was just one long recording… and if I had never done anything else in my life all my music ambitions were fulfilled during our years together. I am constantly asked ‘what was he really like?’ My reply is always ‘Just listen to his songs, they tell it all.’ Solid Air part of a love affair. Miss him … and the rucks!”

Thompson lost a life-long collaborator and compadre, whose volatility just gave a frisson to the soul surge of the music. Personally, for this writer, traveling and interviewing Martyn was a special laugh – before he got on stage. Then something quite different, a mystic chemistry, overtook the flip banter.