The Jamaican adventures of a Japanese dancehall queen 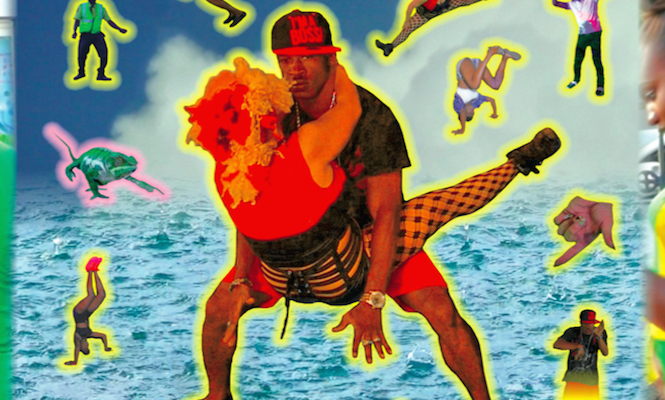 Bom Bom’s Dream (2016) is a surreal highlight from Hayward Gallery’s off-site exhibition The Infinite Mix, which in collaboration with The Vinyl Factory, brings a selection of intoxicating audio-visual works to the labyrinth-like stage at The Store, 180 The Strand.

The new collaborative piece follows the fantastic adventures of a colourful Japanese dancer – dressed in tight latex, red leather, and kick-ass yellow hair – as she travels to Jamaica to compete in a local dancehall contest. A children’s book illustrator by trade, Bom Bom lives a fantasy life when she’s in Jamaica. “Our character Bom Bom goes out, even during the day, in her dancehall costume. It’s a persona that she created, so every day she is celebrating her invention,” Bengolea says.

Like many of Deller and Bengolea’s individual works – not least Deller’s 2006 film on the international fan base of Depeche Mode – Bom Bom’s Dream explores the social character of rituals in popular music.

“In dancehall culture, the music, the dance and the fashion is very explicit, very sexual,” reflects Bengolea, herself a performance artist with a particular interest in dance anthropologies. “So one can go out naked, there’s no problem; every woman is respected. It’s a fun way to communicate with nakedness and dance.”

The video features extremely raw footage of Bom Bom and her dancehall opponents rolling around in the dusty yard of a shopping centre. Filmed during one of the hottest summers on record, it was a gruelling dance-off. “The humidity was between 90 and 100 per cent, so even at night, you see everyone sweating,” says Deller.

Bom Bom, with her gymnastic, slapstick, and sometimes rude moves, outdances the competition to come out on top. Her prize? An electric fan.

But the rest of the film runs like an extended fantasy sequence, patched together with low-fi special effects. “We used green screen a lot because I knew it was going to be difficult to get a very clean version of her dancing at night,” Deller continues. “In a studio, we could do whatever we wanted. It’s all quite abstract.”

There’s an acid-laced daggering scene with celebrated Jamaican dancer Shelly Belly, who also contributes to the piece’s steamy original soundtrack, produced by Sanjay Ramanand, which you can hear above.

In the final section Bom Bom swims in a shark-infested ocean before she is eaten by a doting, talking chameleon. Bengolea explains: “I really wanted to shoot under water with sharks and rays and many different fishes in an aquarium. Bom Bom was very afraid but when are you are afraid, it can be like magic.”

Order the soundtrack to Bom Bom’s Dream on vinyl from VF Editions.