Island digging with Ruf Dug: The disco-funk sound of Guadeloupe in 10 records 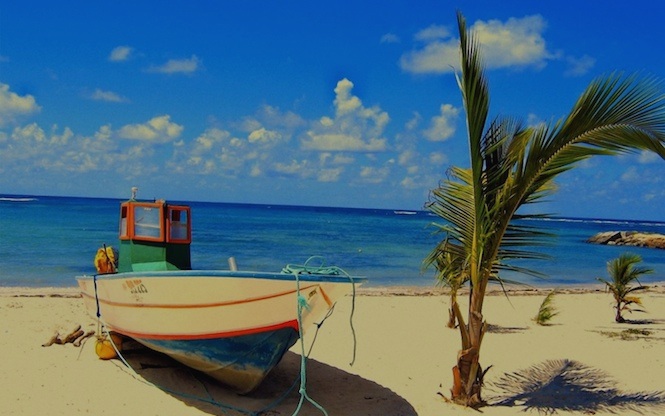 Manchester’s king of tropical analogue recently returned from Guadeloupe with a record bag bursting with caribbean disco, funk and synth. Here are ten of his most essential finds, introduced first by Patrick Ryder and then Ruf Dug himself.

This month saw the release of Island, the debut LP from Ruf Dug. The well travelled producer recorded the album on location in the elysian surroundings of Guadeloupe and the result is a rich cocktail of Compass Point oddities, synth birdsong and coked-up action themes.

When he wasn’t tinkering away with his portable studio or debating traditional music with the police, Ruffy took the opportunity to immerse himself in the local scene, digging deep into the crates for some obscure sounds and here he picks ten of the best.

Listen to all ten tracks in this playlist or individually as your scroll. The most famous musical export from Guadeloupe is the group Kassav’ and although this track is credited to guitarist Desvarieux the whole band tips up on this 200% stone cold dancefloor weapon. Unrelenting in its pace, by the time the vocal kicks in everybody is lost. There was even a private press scene in Guadeloupe – this otherworldly piece comes from an experimental record put out by Serge Fabriano and his music students. I put this up on YouTube while I was still out there and almost immediately had some of the big diggers hitting me up to see if I could find them one too! This track is the B2 on an otherwise forgettable record – looking at the label gives the clue though; this track is by none other than Kassav bass player Georges Decimus. Erick Cosaque is one of the more political recording artists, often making music in the highly political Gwo Ka style. This track captures that steamy rum-soaked mood better than most, and it’s basically the blueprint for my track ‘Dominica!’ – I sent this across to Nev as a guide when he was coming up with the vocals. Definitely showing the Latin influence that shines through a lot of the pre-’80s Guadeloupe music, I chose this largely because of the massive synth line that kicks in about half way through. For whatever reason the musicians on the island embraced synths as early as possible and it’s not difficult to find great mid-’70s tracks that sound quite normal then turn into monster synth workouts. A quick hop to Haiti for this one – more of that next-dimension mystical spooky gear. The copy I picked up over there is scratched to fuck which kind of makes it even more out there… he organ’s plaintive arpeggios fighting their way through the thick layer of crackle… More private press stuff now – this is just a wonky, weird, over-compressed pop song that sounds like nothing else. I like that even though it’s dead sweet that the drum machine is right up in the mix and kind of brutal. Roland Louis made a few absolutely killer records full of next-next-next-level island funk & disco, exactly the sort of stuff you would be buying for millions of dollars from the Invisible City guys. Outstanding cover on this one as well. Francky Vincent
‘Switch On The Light’ from Le Lolo
(Celluloid, 1985)

These guys can also crank out boogie power pop when they need to – Francky Vincent is another local hero, this album found itself a full release on Celluloid. Big finish with a track that shows how bonkers Zouk can be. It’s really fast, it’s got a crazy string & horn bridge and it is unrelentingly cheerful. The masters Desvarieux & Decimus saw us in and they can see us out.

Ruf Dug’s Island is out now on Music For Dreams. Hear more from Ruf Dug in Guadeloupe in his recent mix for Test Pressing.