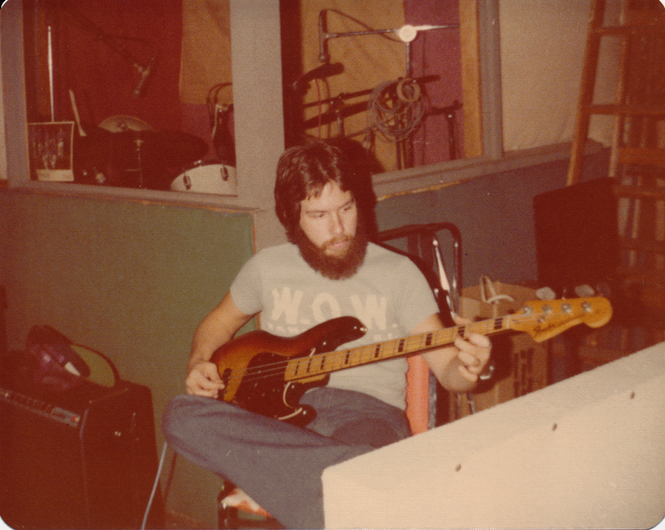 Aloha Got Soul is about to embark on its first project: reviving Mike Lundy’s The Rhythm Of Life. The reissue series lifts music from the album, commencing with a stellar 7″ this week and culminating in a full LP reissue by the year’s end.

Roger Bong, the man behind the label, has given us an exclusive excerpt of his interview with Lundy and previously unreleased photos – both of which will form part of the liner notes for the LP release. And if that’s not enough, tuck into Bong’s top 5 funk gems from paradise here.

I recently sat down with Mike Lundy to bring him up to speed with the 7-inch release due out January 31st. I also wanted to ask him more questions about the recording sessions for his 1980 LP, The Rhythm Of Life. Since our initial interview in 2013, we’ve had a string of fleeting conversations about the LP which revealed only slivers of the album’s backstory. My goal was two-fold: have a lengthy interview with Mike to gather content for the full LP reissue, due out November 2015; and simply to get to Mike better as a friend.

Undoubtedly because of this reissue project today, Mike’s memories of that time have resurfaced. For example, last year I asked Mike to dig up any old photos he might have of the recording sessions. It took months, but he finally came across three albums packed with pictures from his past—not just photographs from The Rhythm Of Life sessions, but dating back to 1967 when he was leading a successful teen band called The Deltones.

As our 2-hour conversation unfolded, those memories slowly peeled back the mystery of Mike Lundy and The Rhythm Of Life. Mike hasn’t talked about those sessions for years, so in many ways he was rediscovering his own story again, too.

In 2013 following our first interview, Mike told me “this is just the beginning”. He was right. But the crazy thing about this reissue project—and you’ll find out why in the exclusive interview excerpt below—is that it feels less like luck or happenstance that we’ve arrived here today. It’s fate. Roger Bong: What do you remember about the recording sessions? I think we talked a little bit about it, and went over those photos together…

Mike Lundy: Yeah, but I didn’t give you the book! I got a notebook and I got all the sessions, who sang on them, times, dates. I didn’t realize that when I first signed with the company to do an LP, we were only contracted to do a two side 45.

M: Yeah! I didn’t realize until I looked at the session notes, because it’s been so long—this was in 1980! Come on man, you weren’t even born! [laughs]

I was starring at my old book going, “That’s right, I only signed to do two songs, a 45.” Then when we got into it, and he saw that it could be a full album. So we signed up for a full album.  The two songs were ‘The Rhythm Of Life’ and ‘Tropic Lightning’, our producer said the same thing that you did to me. He liked ‘Tropic’, because it had that little bit of a local tang to it—the locals could grab onto it. A lot of my other stuff is not at all local.

R: Yeah, it’s hard to relate it if you’re expecting an “island groove” or “island sound”.

R: Tell me about Broad Recording Studio [where The Rhythm Of Life was originally recorded] at that time?

M: At that time Aura was doing stuff there. They were doing their LP. Kirk was also doing his stuff there.

M: Yeah. So that was the hub then. All the local guys would go upstairs, it was up on the second floor, so you go in the door, walk up the stairs, and it was at the top of the stairs. It was a wild and creative time. Very creative times. R: Wow! Aura, Lemuria, and Mike Lundy in the studio! Those are the holy grails of Hawaiian funk LPs. People want those so bad.

R: That’s why I’m so glad we’re doing this project. People know these songs, but there’s no way they can get a copy.

M: [The studio] had me booked on the weirdest times, because they were trying to keep the cost down. So it’d always be from 1am-4am or 2am-5am, late at night. All these guys on my album were coming into the studio after other gigs. They’d already worked all night, and were coming in after hours to do the sessions. And out of it, everyone that did it, there were only a few that got paid. Everybody did it for free.

R: Wait—why would they do that? Why’d they do it for free?

M: Because they all believed in it—they believed in the music! I’d play them what I was trying to do, and they’d agree to come in for free. See: they all had jobs, gigs, it wasn’t like they were sitting at home and needed income.

In those days there were so many lives rooms for them to make a living. We had Spence Cliff, there were clubs all along Kalakaua [Avenue], Beef ’n’ Grog, all these live rooms that would have bands. Even Spence Cliff would fly bands down from California to play.

R: To do a residency?

M: Yeah, to come and play inside their clubs. The live scene was incredible! You could actually pay your rent by playing!  There were jobs I had going 6 days a week, a bill a night. Back then, think about how much income that was!

You know what was wild about that project [The Rhythm Of Life LP]? I never knew what we were going to do. I had the songs, and we went in with a three piece. Drums, bass, and me, and we would record the song once through, play it back, and think about what we could do to make it fly more. We didn’t have a pre-concept of what was going on. It was your basic three piece, rhythm guitar, bass, and drums.

And that’s the reason why Mike Kennedy to this day says, “oh you know, I’m sorry how I played ‘Tropic’“. If you listen to “Tropic” the drum does the same fill, *dum dum dum dum* it’s the same fill through the whole song, because Mike says, “I didn’t know what was going on! It was just the three of us, and you were just singing me the song as we were playing it live in the studio, being recorded, and I just tried to play it safe. That’s why I did the same fill for all the breaks.” I told him, “No, those drums cue up everything, it locks it in. You can always count on that lick at the end where there’s a break.” *dum dum dum dum* (Mike does drum noises and singing) I told him, I said, “It’s OK Mike! It works!” He replied, “It’s kinda lame, eh?” I said, “No man! It works! Hello!”

We didn’t have anything production wise, it was all on the fly! We did it as we went. Of course there were some things I had in my mind that I knew I wanted. Like the clavinet for the funk parts on “Nothing Like that Funky Music”. I knew that we had to have this funky gravel sound in there, because that’s where the funk is at!

R: There are people in this world that are going to buy this record, and they don’t know anything about you or your back story. What do you want them to know about your music?

M: That it comes from the soul. I just feel that my music is coming from within me. There’s no pretence or pre-direction that I [have when I] go in, it all comes from inside.

Mike Lundy’s The Rhythm Of life will be released on January 31 by Aloha Got Soul.