How to master a record: Legendary engineer Noel Summerville talks about mastering for vinyl, cutting dubplates and working with The Clash 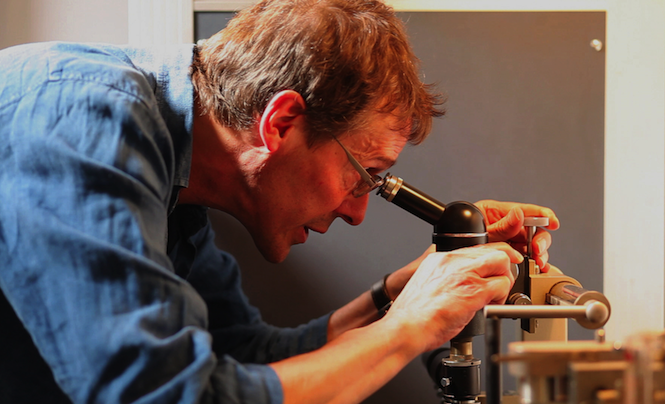 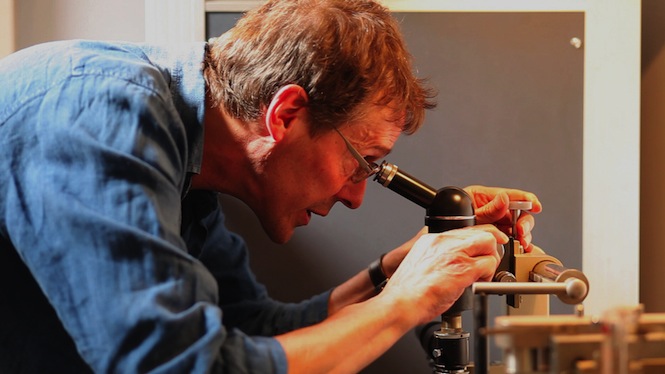 After last month’s “How to release a compilation” with Vlax Records, mastering engineer Noel Summerville sheds light on what goes on before the needle drops.

Beyond a small inscription on the run-out only visible when you tilt the record to catch the light, Noel Summerville leaves no trace. In a career that has spanned the modern music industry’s major junctures, he has mastered records for everyone from The Clash to My Bloody Valentine, Kraftwerk to The White Stripes.

Having cut his teeth on hundreds of records at Pye Studios and Metropolis, Summerville now operates out of a home studio in a shed at the end of his garden and On one of the few remaining Neumann VMS70 lathes left in the country, he cuts records for some of the most demanding electronic musicians around. Aphex Twin and Autechre have been regular clients. When we arrive, Dinos Chapman is just finishing up and when we leave Noel quips that he had to use a fake file name on his computer for this year’s Boards Of Canada LP to stop other clients catching a glimpse of the tightly guarded release.

Softly spoken,he embodies the quiet industry of the mastering engineer. His studio is modest, the equipment of the highest calibre. Everything is tuned to perfection. From receiving the source file (digital more often than tape these days) to handing over the master lacquer, Noel Summerville takes us through the mastering process from his perspective, stopping off to talk dubplates, de-essers and dodgy record players on the way.

How did you get into being a mastering engineer?

My first job in a studio was at Pye Studios as a tape op. First in, last out, make the teas, clean up, do all that kind of work and a bit of assistant engineering. Pye Studio’s had two cutting rooms and I thought life in the cutting room looked better than life as a tape op or assistant engineer, so I started to hang out in the cutting room, get to know how to operate a lathe, did a bit of holiday cover and then, there you go, the room is yours, you’re on your own now.

Was there more competition for work when you started than there is now?

Other way round, I think there’s probably more people doing mastering whether for CD or download, but on the vinyl side of it there’s probably fewer lathes around. Anyone who’s got a lathe in good condition and knows how to use it should be keeping themselves quite busy.

What does it mean to say that something is mastered specifically for vinyl?

With CDs or with digital download files, if you want huge amounts of treble or huge amounts of bass you can have it because it’s not going to distort. Vinyl, being an older and much more delicate medium, you’ve got to basically control the extremes of the frequencies. The very highs and the very lows just won’t work on vinyl – they’ll distort or the record will jump or whatever – so you’ve got to reign things in a bit. By doing that you’re actually making it sound a bit nicer anyway because you’re getting rid of the real nasty extremes of the spectrum. Filters are probably the most common things I use on the desk. 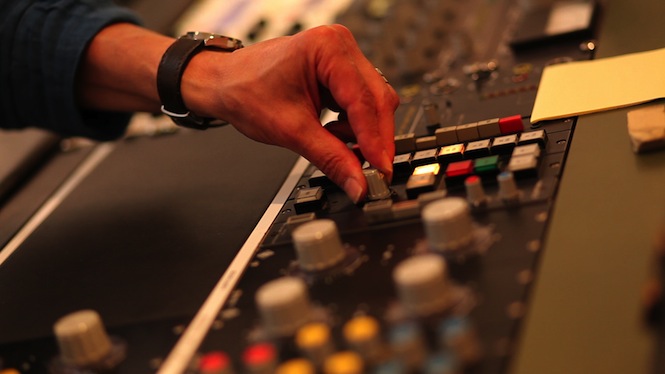 Is that because the playback is that much more sensitive on vinyl?

Yes, and you’re always aware that people are going to be playing it on dodgy record players and it’s got to work in a club and on all record players.

That must be something that has made your life more difficult in recent years?

Indeed these days yes, but the great thing about vinyl is that someone at least has to sit down with something approaching a hi-fi system to listen to it. You can’t listen to a record on your iPhone, thank goodness.

When you get sent a track, how much input will the artist have?

They tend to leave it in my hands. Their input has been to hopefully record it well and mix it well and if all that is done properly then mastering should be quite easy. I mean sometimes mastering is doing nothing. You don’t have to do something, if it sounds great you just leave it alone.

So, how would you best describe the job that you do to the layperson?

Basically, if we’re talking about vinyl, it’s transferring from one medium – it used to be tape and it still occasionally is tape, but invariably it’s a digital source – to another, from source to lacquer. As well as getting it to sound good, or as good as it can get, you’re also working for the limitations of the medium. 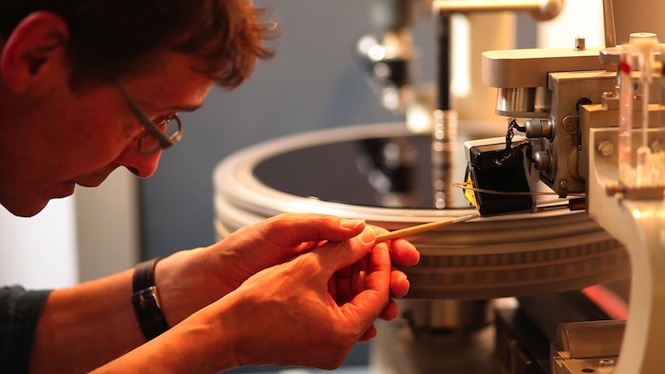 You work closely with specific artists and have done over the course of your career I imagine?

Yeah, I have done. There are repeat clients who keep coming back, there are always new people. Over the years it goes back to working with The Clash on Compact Rock and Elvis Costello, Sinead O’Connor, they all had huge records, and Pete Waterman was quite fun as well. Recently a lot of the work I do is largely electronic. Sometimes you don’t know what you’re going to hear until you press the play button.

I suppose it doesn’t really matter who you’re mastering for and regardless of how many people will hear it, it’s still got to sound good.

Yeah, when you’re mastering The Clash you know it’s going to be heard by a lot of people. You always just want it to good. The last thing you want is for someone to come back to you and say the record jumps or it’s distorted.

In a way as the engineer, you’ve left your trace on a whole canon of music history without people knowing who you are.

With vinyl you can put a little mark on the lacquer next to the run-out. I just put my initials “NS”, but different people have longer signatures, Porky Prime Cut being the most famous one perhaps.

The now-retired engineer George Peckham. He always used to write “A Porky Prime Cut” because his nickname was Porky. 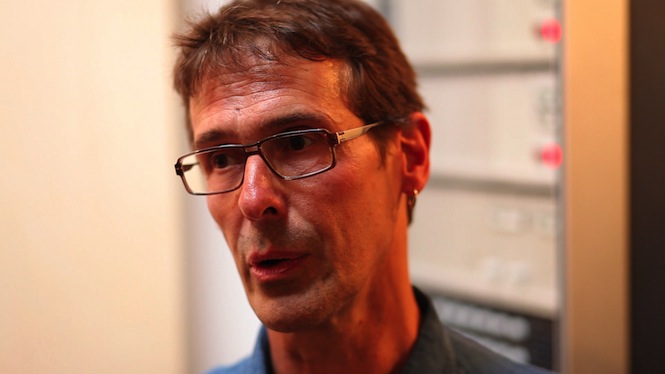 Are there different processes involved when mastering either vocal, instrumental or electronic music?

Not really no, but there’s a certain kind of distortion you can get with vocal music I suppose. Sibilant S’s distort on vinyl, but that’s why you have a de-esser and that’s why they’re called de-essers, to soften those S’s. It’s thing like that which for vinyl you’ve got to be more careful of.

I’ll do a test cut, play it back, make sure I’m happy with it, if there’s an artist or client attending I’ll let them listen to it so that when they get their test-pressing, if there’s a fault with it, they might know that it’s not actually a cutting fault it might be a pressing fault.

What happens once the master disc leaves your hands?

The master lacquer, if it’s a playable positive, is sprayed with a very fine silver solution to effectively give it a metal coating, so that when it gets electro-plated it’s got a metal surface to adhere to. Then once it’s been electro-plated it’s peeled off so you’ve got a metal negative. And that process is then repeated again to make a metal positive which can be played. It’s in a kind of thick foil by this stage and then it’s repeated again to make another metal negative. You put two of those metal negatives in the record press with a blob of hot plastic in the middle, and squish, out comes your record.

They’re the discs known as the mother and the father?

Yeas, mother father, positive negative. It’s a process that hasn’t changed since it reached its point of development whenever that was, in the 40s or 50s. 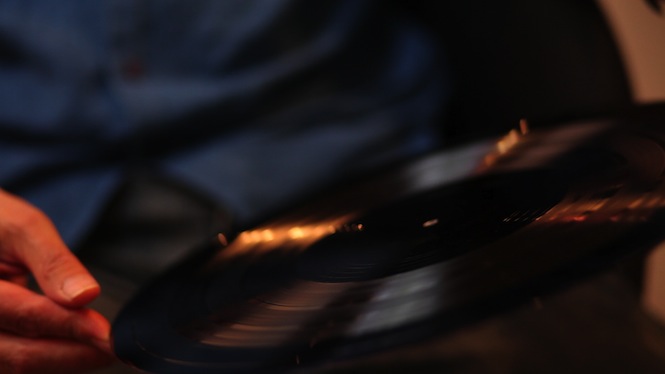 One of those questions that always comes up is what exactly a dubplate is. Are they made with the same process?

Exactly the same. When we cut a master, it’s on a 14” disc with a 12” cut within it, but that won’t fit on a regular record player. A dubplate is exactly the same thing but it’s on a 12” disc and it’s just designed as a reference that the artist or label can listen to, although back in the 90’s or whatever when vinyl played a bigger part in dance music and club music, DJs would often want dubplates, or acetates as they were also known, cut just one off so they could go and play those that night in the club. But they’re very soft and delicate, so you play them a few times with a heavyweight stylus and you’re chewing them up at the same time you’re playing them.

You can’t be asked to cut as many dubplates these days, right?

It used to happen all the time, but it’s very rare for me to cut acetates and dubplates now because people DJ off a laptop.

We used to have 7” discs. I don’t think anyone makes them now but it used to be that if there was a hot new single that you wanted to get out to radio stations you might spend almost a whole day cutting 20 or 30 acetates of the same song and they’d go out to all the different radio stations so they could be played that day before the finished items came off the press.

Would these promos then become highly sought-after?

Yes, although somebody told me that to collectors they’re not actually as collectible because they do wear out and they can get knackered quite easily.

With so many pressings involved before the vinyl stage is reached, the quality has to be right from the very beginning.

As critical a stage as getting the cut right is getting the pressing right. A good lacquer is pretty much noiseless – if there is a noise it’s usually just a very low level background noise – but in the manufacturing process that’s where sometimes the little pops and clicks can come in. The finished item is sort of four or five generations from the master lacquer. 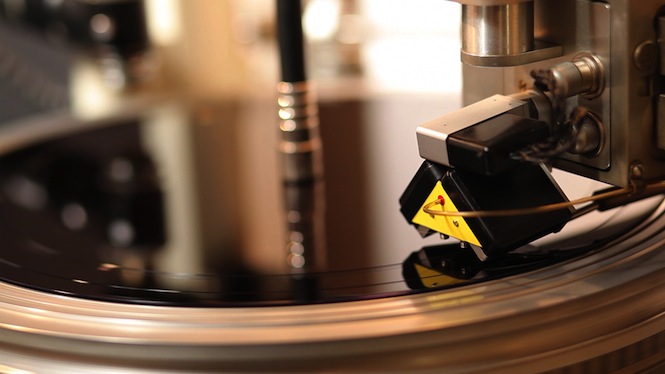 No, it’s the same process. You’re still trying to cut it as loud as you can get it which is often dependent on the playing time, so that when you put the needle down the sound leaps off at you.

If you’re talking about an LP and it’s only 17 minutes long you’ve got a certain amount of room to fit 17 minutes of music in, so you can adjust the groove spacing and the groove depth accordingly and you can maybe get a bit more level on it. But in that same amount of room on another LP you might be trying to get 25 minutes of music, so you’ve got to cram the grooves closer together, they’ll be shallower grooves and you’ll probably be cutting it at a lower level as well because the cutting level – the volume that you’re trying to cut at – directly effects the speeds at which the cutter head moves across the lacquer. So if it’s a short record you can set that to move along quite quickly – on a 12” single you might only have 6 minutes of music – so you can cut deep grooves, turn the volume up and get a good, loud cut.

Find out more about Noel Summerville by visiting his website.

27 record stores you have to shop at before you die 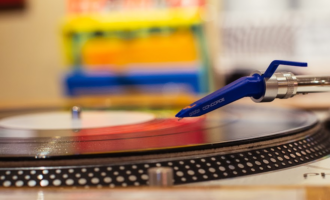 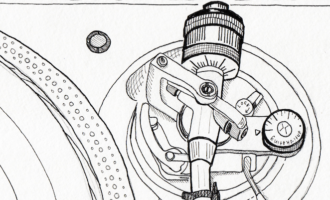 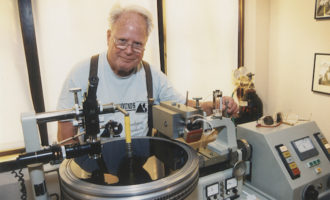 One of the last great mastering engineers has passed away 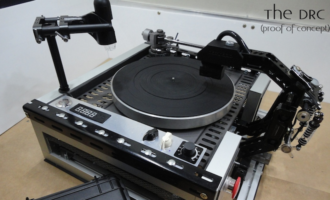