Inside the 15,000-strong record collection at Hawaii’s State Archives

A donation of two extensive collections is revealing new links to cultures at risk of being lost.

Two of the world’s most comprehensive collections of Hawaiian music are now in the hands of the Hawaii State Archives in the heart of downtown Honolulu.

In December 2021, a total of nearly 15,000 records almost entirely composed of Hawaiian music, with discs dating back to at least 1903, were donated to the organisation by the respective estates of Hawaii-born radio broadcaster Harry B. Soria Jr. and British-born, Toronto-based musician Michael Scott.

From a collector’s standpoint, you could say this is the come-up of a lifetime — but that falls short of the true value at hand. Combined, these collections represent a direct connection to a long out-of-reach era of Hawaiian music and history, with the potential to form a greater understanding of the Islands’ heritage.

In 1893, American businessmen forcibly overthrew the Kingdom of Hawaii, and in subsequent decades colonisers oppressed native Hawaiian arts, culture, language, and music to a point of near extinction.

“The best way to disenfranchise and oppress any group of people is to take away their language and access to their history, their pride,” says native Hawaiian radio broadcaster Paige Okamura, who hosts a weekly radio program on Hawaii Public Radio called Hawai‘i Kulāiwi, during which she plays Hawaiian music from every decade, weaving cultural and historical insights into a dialogue on the responsibility that community members have towards native land.

“From a Hawaiian national identity standpoint, [this collection] gives us back access to a very niche part of our history: Hawaiian music.”

Okamura’s enthusiasm is mostly for “Uncle Harry” Soria Jr.’s collection, which includes decades of weekly broadcast manuscripts, archival research, show notes, musician interviews, and rare recordings from Hawaii’s territorial era. All of this was made from the years 1900 to 1944 when the United States government annexed the Islands.

“Our understanding of Hawaiian music is very generalised, and Uncle Harry provides the details that we were missing all this time. His is the most extensive personal collection of Hawaiian music and history,” says Okamura, who considered Soria Jr., who died in December 2021, as a mentor and friend.

The Hawaii State Archives hasn’t always had a library of recorded music in its possession. It had manuscripts from the likes of the Royal Hawaiian Band and Queen Lili‘uokalani, who was a prolific composer, but little else beyond that. “We did have some recorded sound,” says state archivist Adam Jensen.

“We had dozens of records. We had Edison cylinders. But that wasn’t anything we had any major focus on, and as such never had the ability to replay them.” The Archives didn’t even have a record player.

That all changed in September 2021. The same day that broadcaster Harry B. Soria Jr. and his wife, Kilohana Silve, signed the paperwork to donate Soria’s collection to the Archives, Jensen boarded a flight to Toronto, Canada, to retrieve Michael Scott’s 10,000-strong trove of records.

“Fate had decided we need to go in this direction,” says Jensen. “You don’t just have two of the largest collections of Hawaiian music in the world drop on your doorstep within days of each other.” Scott was a steel guitarist with a lifelong fascination for Hawaiian music and even cut a few records himself. 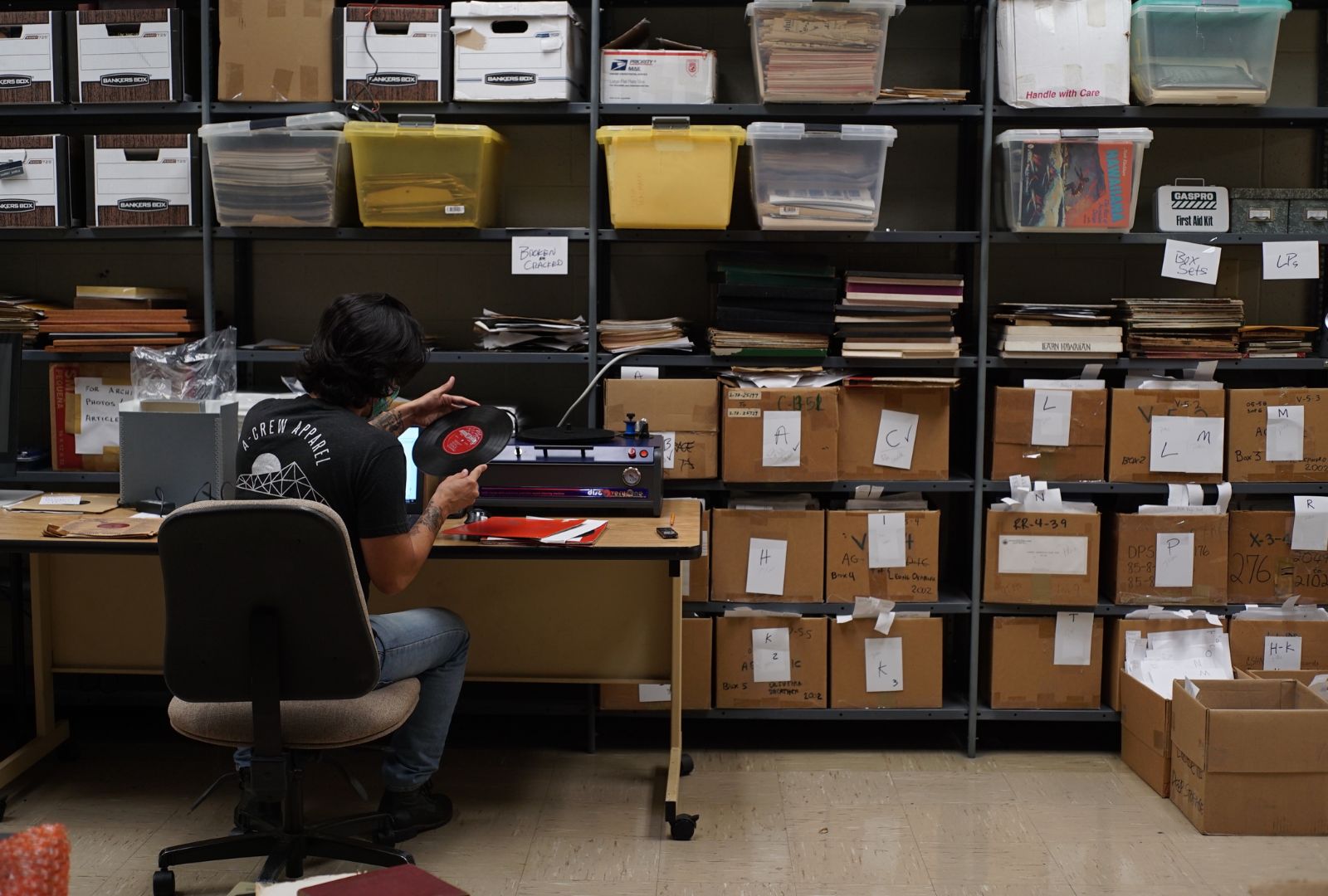 Although not a musician, Jensen has taken ukulele lessons, which has helped him understand the dynamic that records have in Hawaiian music.

“One of the characteristics that a record has to have is fixed form and content so that every time it’s referenced by a researcher it is the same,” he explains. “And the fact that you’re taking a type of music where improvisation is part of the process — the whole process of playing [Hawaiian] music is so vibrant and dynamic, it’s not the same twice — there are so many different recordings of the same song by the same artist done multiple times, as well as different artists covering the same song.”

In early 2022, Jensen compiled every version of ‘Aloha ‘Oe’ available for the 175th anniversary of Washington Place, the private residence of Queen Liliʻuokalani. He found several dozen versions in their collection.

The records also provide a rare link to manaleo, or native speakers of ‘Ōlelo Hawai‘i who lived during the Kingdom of Hawaii period from 1795 to 1893. These speakers represent an unbroken connection to the Hawaiian language’s ancestral roots.

“Hawaii was such an oral society up until very recently. A lot of mo’olelo, or ‘story’, was only passed down through the spoken word, chants, and then songs. Writing onto paper is a much more recent phenomenon within Hawaiian culture,” Jensen explains.

“The earliest recordings made in 1900 to 1910 have manaleo speakers who learned to speak Hawaiian in the Kingdom period, recording the earliest, purest Hawaiian that didn’t necessarily transcend to today with the annexation of Hawaii and the American control over the educational system.”

Colonialist suppression pushed one of the most literate nations in the world to stop speaking its indigenous language almost entirely. There are estimates that at one point only 3,000 speakers of ‘Ōlelo Hawai‘i existed. These early recordings of Hawaiian lyrics and song, then, offer the potential for greater understanding and perpetuation of the Hawaiian language for future generations.

Reece’s research in the past decade has uncovered key moments in music history, including linking musician Mekia Kealakai (1867-1944) to the creation of one of pop music’s most recognisable stringed instruments, the Martin Dreadnought — the guitar of choice for artists such as Johnny Cash, Elvis Presley, The Beatles, Stephen Stills, Neil Young, and Hank Williams. These recordings from Kealakai’s era provide a primary source for people like Reece to continue making important musical discoveries for Hawaii.

“For a long time, Hawaii’s history has been dominated by the narratives of collectors and colonisers,” says Reece, who was born in southern California but has called Hawaii home since 2001. His hope is that with the thousands of recordings now in the Archives, he and his contemporaries will be able to contextualise these compositions to create a greater understanding of Hawaiian music.

“Our hope is that we can shift the conversation about Hawaiian music’s role in popular music, that it’s not just a novelty, but has made real, tangible impacts on music throughout the world.” 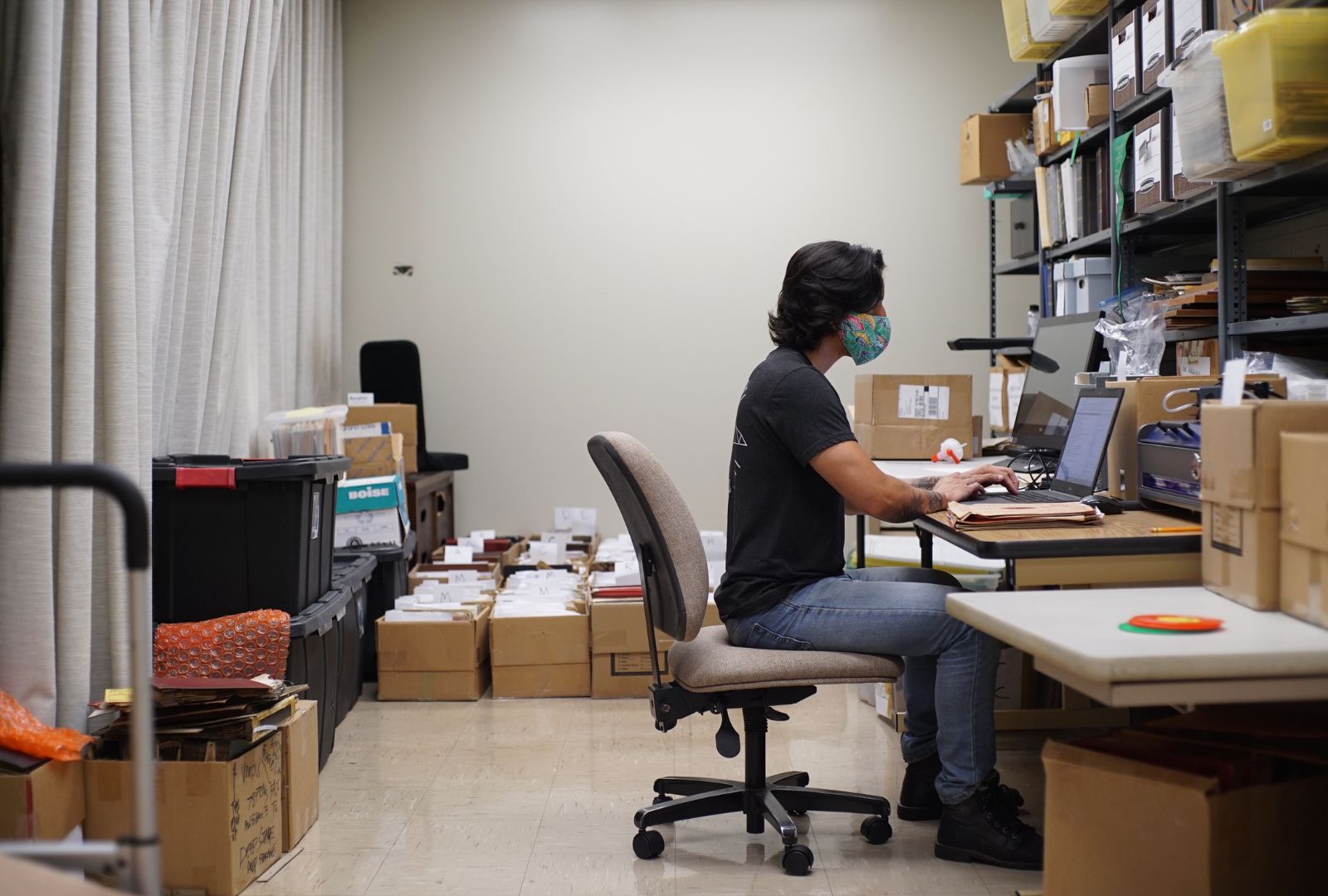 The goal of the Hawaii State Archives is to digitise everything and make it available to the public. Not an insurmountable task, but certainly a huge one that will take time.

Jensen is the only staff member at the Archives working on this project. All other help comes from volunteers, who have contributed hundreds of hours to indexing and cleaning records. Indexing involves data entry of the artist name, song titles, names of features and musicians, label number, matrix number, and any other pertinent information found on a record.

While the Archives doesn’t have resources for more staff, Jensen has been able to build an archiving setup worthy of the Library of Congress.

The process begins with a two-step cleaning procedure using a Keith Monks discOveryOne machine with BreakTheMold cleaning fluid, followed by a spin in the Estonian-made DeGritter.

From there, discs are digitised on a rek-o-kut Trovatore turntable with a Grado 78E stylus sitting upon a Minus K Vibration Isolator, passing through a Vadlyd MD12 Mk4 phono preamp and finally through a Lynx Studios E44 capture card to create two distinct recordings: a raw capture, and another lightly equalised recording. A SugarCube SC-1 component helps remove clicks and pops in real-time.

Records are then housed in Japanese polyfibre bags, custom made for the Archives to accommodate the variances in the size of early 20th century 10” shellac records.

As for the earliest records, whose shellac or vinyl coating is too delicate for playback with a needle? Jensen has tossed around the idea of acquiring an optical turntable, which uses a laser to read the music embedded in the grooves. But with thousands of records still waiting to be indexed, he’s willing to hold off for now.

“I estimate this to be a minimum 10-year project,” he says, emphasising that both sides of every record will need to be digitised in real-time and that volunteers are integral to the project’s progress.

“Even if it’s slow progress, as long as there’s commitment and interest from the volunteers — that’s what’s most significant, this is the people giving back to the people because they believe it is so culturally important.”