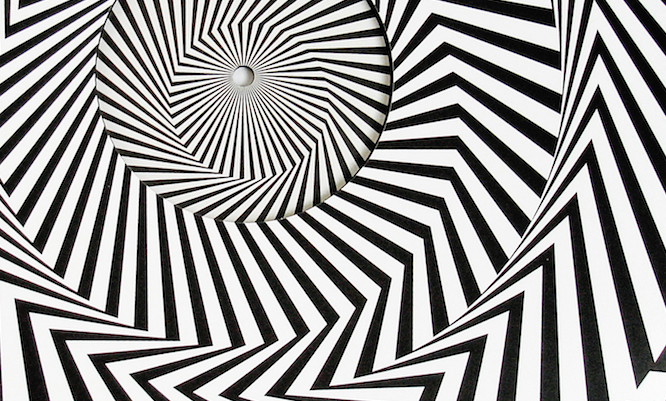 Bend your mind to the dizzying world of op-art record sleeves.

To remedy this, we’ve invited Food to hold down a monthly column exploring the stranger corners of his collection, from mini-records to postcard novelties. Following up his eye-popping look at 3D covers, Food keeps things optical for Freaky Formats #2 and the dizzying world of op-art record sleeves. The Museum of Modern Art’s exhibition entitled The Responsive Eye in 1965 showed two and three dimensional work that asked viewers to look at the depths, colour and movement being created by artists working in this vein from 15 different countries. Bridget Riley from the UK – our most famous exponent of the medium – was featured alongside the likes of Vasarely and his son, Yvaral from France and many more.

One of the first examples of op-art being used on a record sleeve would be Herbie Mann’s 1966 album, Today! with a basic starburst design by Haig Adishian filling the cover, save for the title across the top. Record labels jumped on the movement, using the techniques on 45 label house bags and it was popular on music concrète and stereo test record sleeves. Probably the most well known is the Vertigo label’s iconic logo, designed by Linda Nicol in 1969 for the Phillips sub-label, originals of which fetch higher prices than later issues without the ‘swirl’. Faust’s 1973 album, The Faust Tapes also featured Bridget Riley’s painting, ‘Crest’, on the reverse without explanation. The Spaceman 3, Sonic Boom, Spectrum and the E.A.R. releases largely kept the Op flag flying in the ’80s and ’90s, their Spectrum album on Silvertone using a moving lenticular device that we’ll cover in a future post.

Soulwax’s iconic, retina-twisting Any Minute Now album campaign by Trevor Jackson heralded a return of op in the ’00s and since then electronic artists have been falling over themselves to be seen in stark, monochrome sleeves that mess with the eyes at a sideways glance. The appeal of the clean lines, minimum/maximum design and the eye-catching effect is desperately needed in today’s sea of sleeves and thumbnails when viewed on the shelf or online. Tom Vek – Nothing But Green Lights Special mentions should go to Animal Collective’s Merriweather Post Pavilion album that undulates in front of the eyes and Drums of Death’s three ‘Wave Series’ 12″s on Civil Music which came in variations of his skull face paint motif in different Op effects and colours.

This is just the tip of the iceberg, check the racks next time you’re in a record shop and I bet there’ll be something there, ready to send you boss-eyed.