“It’s a bit of a collector’s wet dream. You’re surrounded by every record you’ve ever wanted in your life.”

But how do you navigate such a tantalising surfeit of earthly pleasure? After six years learning to reign in the most carnal of crate digging impulses, Finders Keepers’ Doug Shipton has developed a system for record shopping at the world’s biggest record fair.

With over 500 dealers to get through over a three day period, the record fair at Utrecht could easily swallow you up and spit you out like the apocryphal Jaarbeurs croquette, leaving you spent, penniless and disappointed, surveying a stack of mediocre records you’ve systematically traded your year’s savings for over one feverish weekend in the bowels of a Dutch convention centre the size of ten football pitches.

But you don’t need to be that person. Last November, we popped our Utrecht cherries and enlisted Doug to show us the ropes. First bit of advice: “Have a budget, stick to it and know what you want.”

Once you’ve got your own system down it’s time to learn those of the dealers. “When I put blue stickers, that means you can play it in the clubs” one dealer with a stack of rare Indonesian 45s tells us. At other sellers you need to work a little harder, massaging deals off the wall over the course of a full weekend.

With a stall of their own, Finders Keepers are not just here as buyers, but also glimpse the other side of the coin, where shady deals are made in hotel rooms before trading begins, favours are called in and information is as valuable as vinyl. “It’s not just the records in here you’re talking a vast knowledge which makes it amazing,” he says.

That said, it’s as a collector that Doug gets most excited and if he could he’d “literally go front to back on every box.” With the fair returning this weekend, here are his eight top tips for navigating the world’s biggest (and, to be honest, any) record fair. 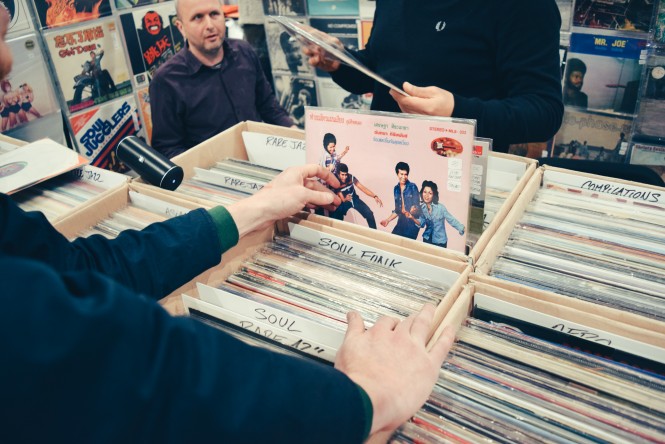 1. Have a budget and stick to it

Have a budget, stick to it and know what you want. I remember my first time coming here I made a real rookie mistake. You come all this way, you spend all this time and you feel like if you don’t go home with a big healthy wedge then you feel a bit disappointed like it’s a bit of wasted trip. But that’s when you fall in that trap of buying quantity over quality, filling gaps in your collections you don’t necessarily need. You could easily fill your boots with five euro 45s but it’s such a wasted opportunity. There’s so much more here you could discover. 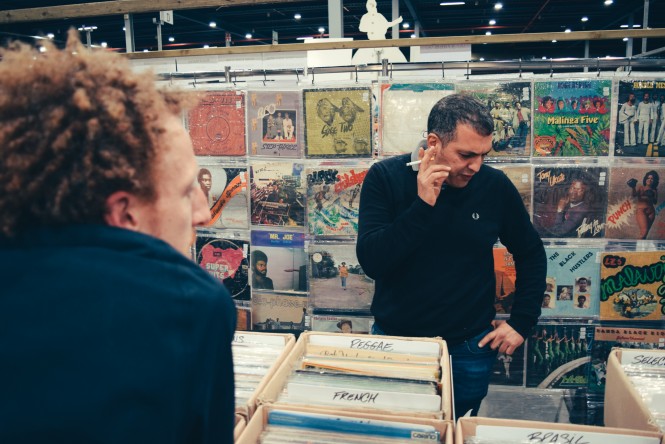 I’m always looking for something unique and to be able to talk to the fellas, they’ve got a good feeling for what I’m after. It’s like coming to all the best record stores, you’re basically spoilt for choice.

In terms of the label, you might get hip to something or if there’s an artist or a record you’ve been toying with, you come down to here to discover things you didn’t know or other projects they worked on, or records you hadn’t seen elsewhere. It all adds to that accumulation of knowledge. And you never know, someone here might even know some of the artists, it’s crazy some of the hook-ups you can find. 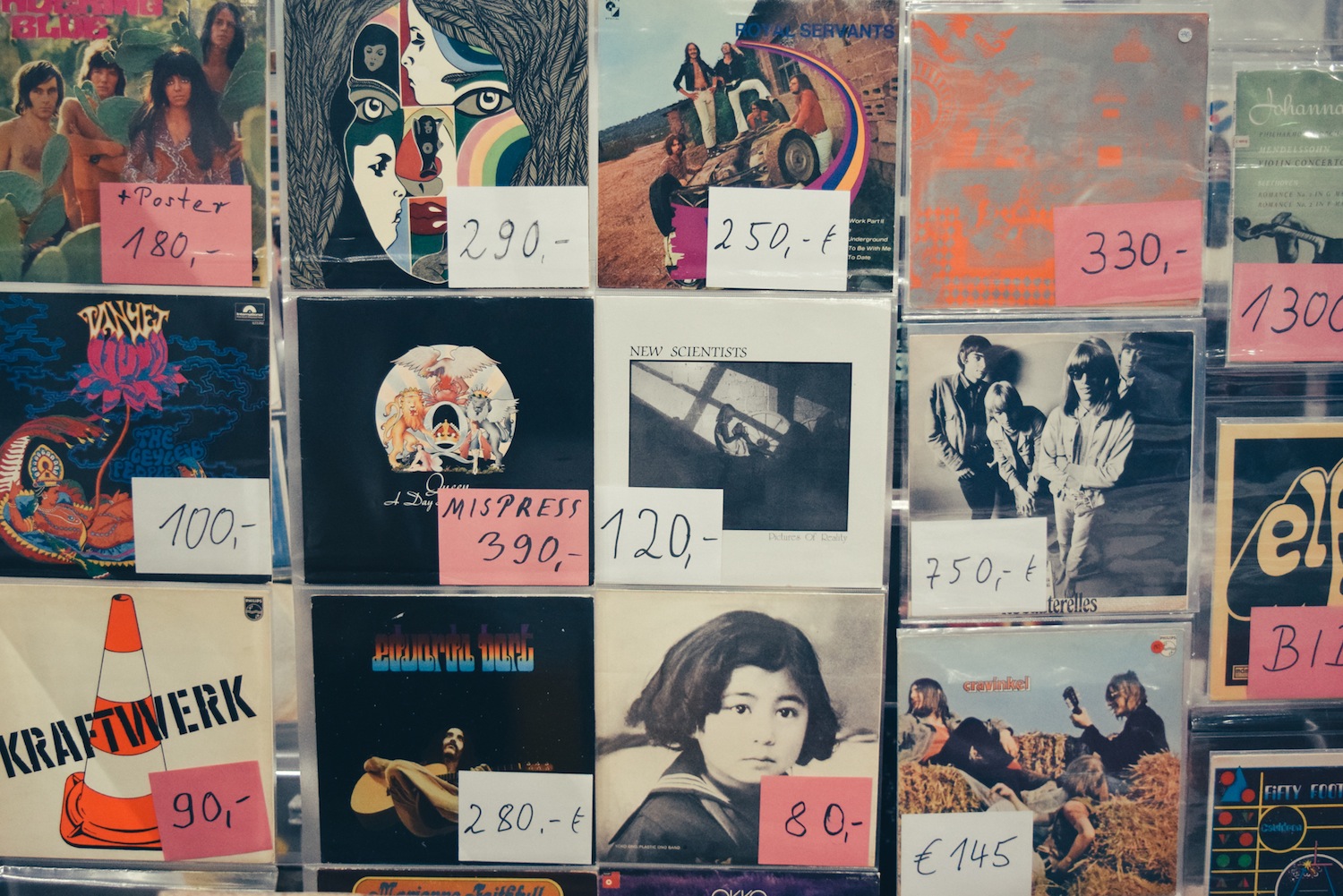 I’m still daunted by the amazing random discrepancy between prices. They could have a reasonably rare Vertigo record on the wall here for €300 and the guy three stalls down could have it for €700 and OK, there’s going to be varying levels of condition, but it’s such an amazingly interesting cat and mouse game of haggling and backroom deals, so again it’s just about the patter and about the chat and getting to know people. You can still find bargains in the bins and if you haggle hard enough you can definitely come out on top. 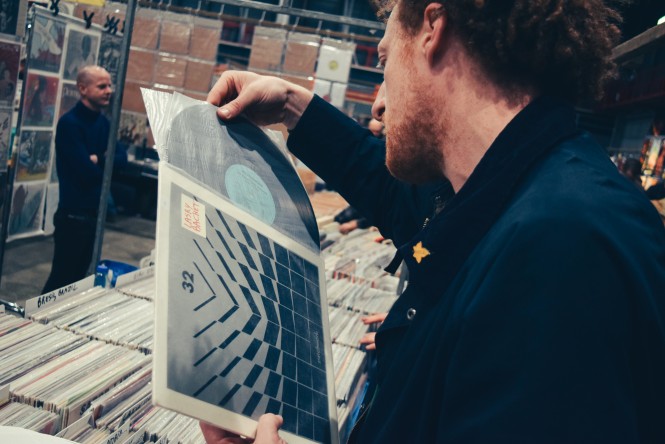 What gets me more excited is finding new stuff that I didn’t know about. Of the wants lists I’ve had over the last few years, maybe I’ve found half a dozen of them. How do you measure your disappointment or your excitement? Do I go home with the ones I wanted at a bargain? I bought a Bollywood record yesterday and it had a Popsike page in the back. And Popsike is the bane of my life. It just means you’ve got to dig a little bit harder. 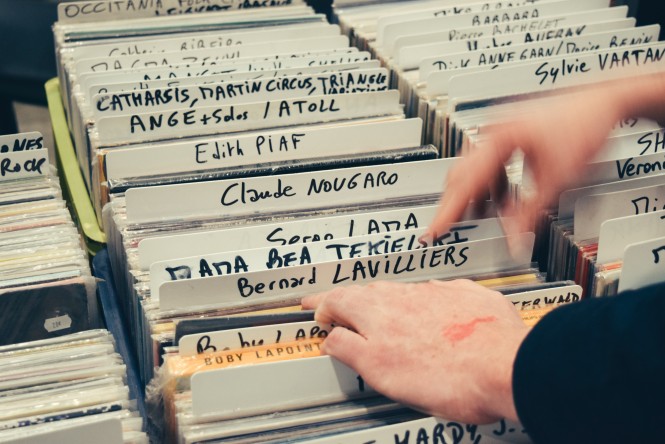 5. Have a system and pick your battles

I’ve got a very specific system, I guess everyone does. Personally I find a lot of the UK sellers quite dear and they’re speciality very narrow. So if I’m after a lot of library music I go to the French or the Italians. German’s are good for Krautrock obviously. But then you’ve got some speciality guys like those from Mexico and Brazil here who are going to be good.

There’s a Yugoslavian dealer over there and I’m really into my Yugo wave stuff at the moment and the stall is incredible for all these very angular looking records. I pulled a haul out that would have cost me 4 or 5 hundred euros and took them back to listen to them and they were all duffers, so I can imagine it being a very dangerous business. I’ve done this across Turkey and Istanbul before but without the Vestax I would have come back with so much guff, it would have been depressing. 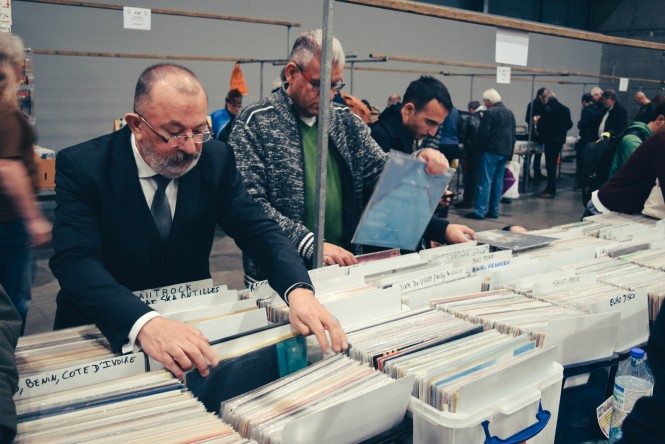 Generally all the heavy hitters will do trades on the Thursday night in the hotels before they even get here. So “dealer Day” is like a lip service to it really, because you could pay €70 and come but all the big guys will have already done their deals.

I’m pretty reserved. I can spend as much as €600-€700 in a weekend. But I’m not looking for those big big big monster rares. We talk about this with the prices all the time. Do you aim for a sort of €40-€100 records or do you go for the big hitters? Because condition is obviously a very important factor. If you’re going to drop €1000 on a record you’ll see the guys walking round with gloves and torches. 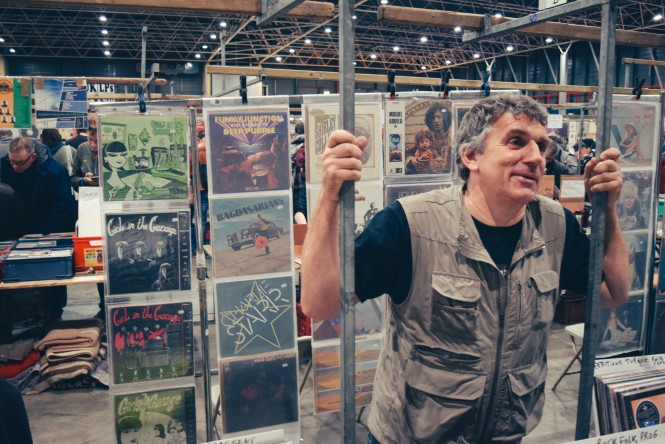 7. Learn the language of the fair

The walls are the first thing you notice obviously. If someone’s got a lot of interesting gear up there, there’s a good chance you might find something there. At Finders Keepers we try and mix it up to lure people in. I definitely suggest going at it methodically, I remember the first time I cam I was just dipping in and out, doing here and there and you just loose track. I get lost now – we have a light on the stall so we know where we are from the other side of the room.

Learn the language of the fair. You see a record on the wall on Friday and you come back and express an interest, stroke your chin, look a bit interested, but from a distance. And then as you get to Saturday and it’s still not moved, you can be a bit bolder, put a reduction on it and see if they bite, and then come Sunday if they’re absolutely desperate to get rid of it you’ve snagged yourself a bargain. 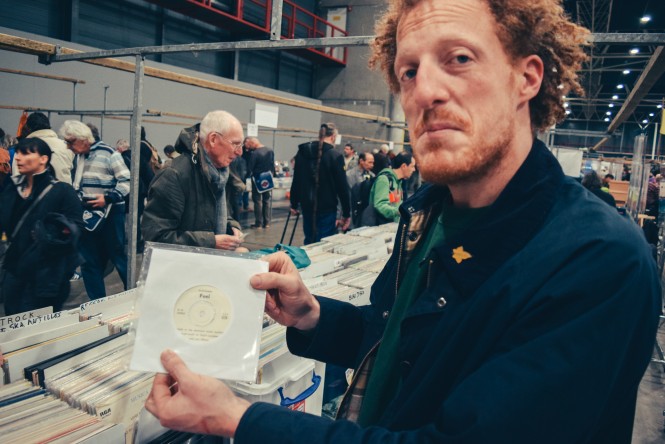 8. But never lose sight of why you’re really there

What do you do? Do you buy records as trophies or do you buy records to enjoy them? There’s always an element of ego involved but I think that’s also healthy. As kids we always had that, and I think each other in the crew discovering new stuff, we share that information and it excites you and you want to reciprocate and bring stuff back.

Andy [Votel] and I always have this discussion, I there’s a lot of guys who come down here to get away from their wives. The really old school dudes, because they have the same records in the same positions every time.

And the croquettes. You’ve got to try one of those, they’re killer.