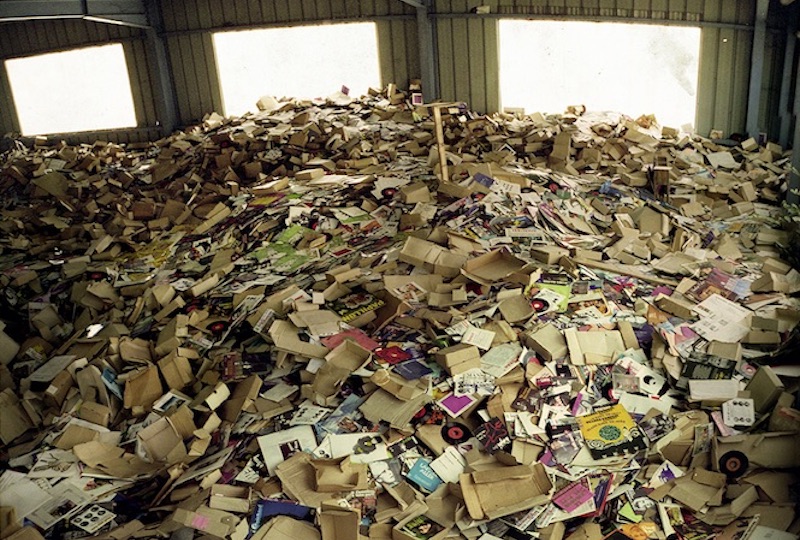 Five years ago, we shared photos from inside a secret record warehouse, literally drowning in vinyl. Now, for the first time, we discover how this astonishing place came to be.

Imagine happening upon a vast warehouse space, knee deep in swells of records of all descriptions – some spilling out of boxes, others still in their original wrapping. Then imagine the place is yours to trawl through, in private, for as long as you want. For Thomas Pasquet, this was more than just a dream.

But let’s take a step back for a moment. In 2013, we spoke to photographer Frédéric Thiphagne about a set of photos he’d taken at a mythical record warehouse for his Les Mains Noire blog. Unsurprisingly, he wasn’t keen to tell us more. All we knew was that he’d been taken to the spot by an “anonymous tipster” in 2009, where Thiphagne was asked to take a vow of silence in order to photograph the astonishing scene. The building was apparently destroyed just two weeks later.

That tipster was Thomas Pasquet, owner of the newly opened Listen! record shop in Paris, who has come forward to tell VF a little bit more about how he came across this vinyl treasure trove. He picks up the story by setting the record straight…

Where was the warehouse and how did you discover it?

Firstly, it wasn’t exactly a warehouse, it was a factory – a former record factory. Back in 2008, there was this free newspaper called Paris Paname that you could pick up by the entrance to most shops in the Parisian suburbs. The advertising section was really cheap, so I put in an ad for records. One day, a dude called and told me he had many records to sell, some with multiple copies. He didn’t mention any quantities, or what kind of records they were. Anyway, I decided to go to his place in Aubervilliers, a suburb in the north of Paris, which is known for having many small factories and warehouses.

The elderly guy, and his two dogs, hosted me in the kitchen, where he brought out a pile of records. Unfortunately, they were all bad, until the very last record, which was The Counts’ What’s Up Front That Counts. It was a French press in immaculate, stock copy condition. I asked him if he had multiple copies as promised. He just replied, “come to the second floor.” Upstairs was a giant, wooden pallet-sized pile of record cardboard boxes. So I began to dig into it and things began to look more and more interesting. I found a few copies of Comme Un Pot De Fraise, a rare French soundtrack, among other interesting things. It was obvious that nobody had come to this place to dig before me, so it started to get exciting. I wasn’t ready for what was to follow.

My host led me to the back of the house, and across a courtyard, where there was a small abandoned factory. As we went up through dodgy staircases, I noticed old machines that looked like records presses (I heard afterwards that they had been sold before I had got there.) On the first floor there were giant bags of record wax pellets. On the second floor were pallets and pallets of record boxes – the place everybody knows from the pictures. Some didn’t have covers, but most were untouched, or bound up in string. My initial reaction was: “it can’t be! It’s impossible that no one from the record game has ever seen this place.” So I started to dig into the first pallets. 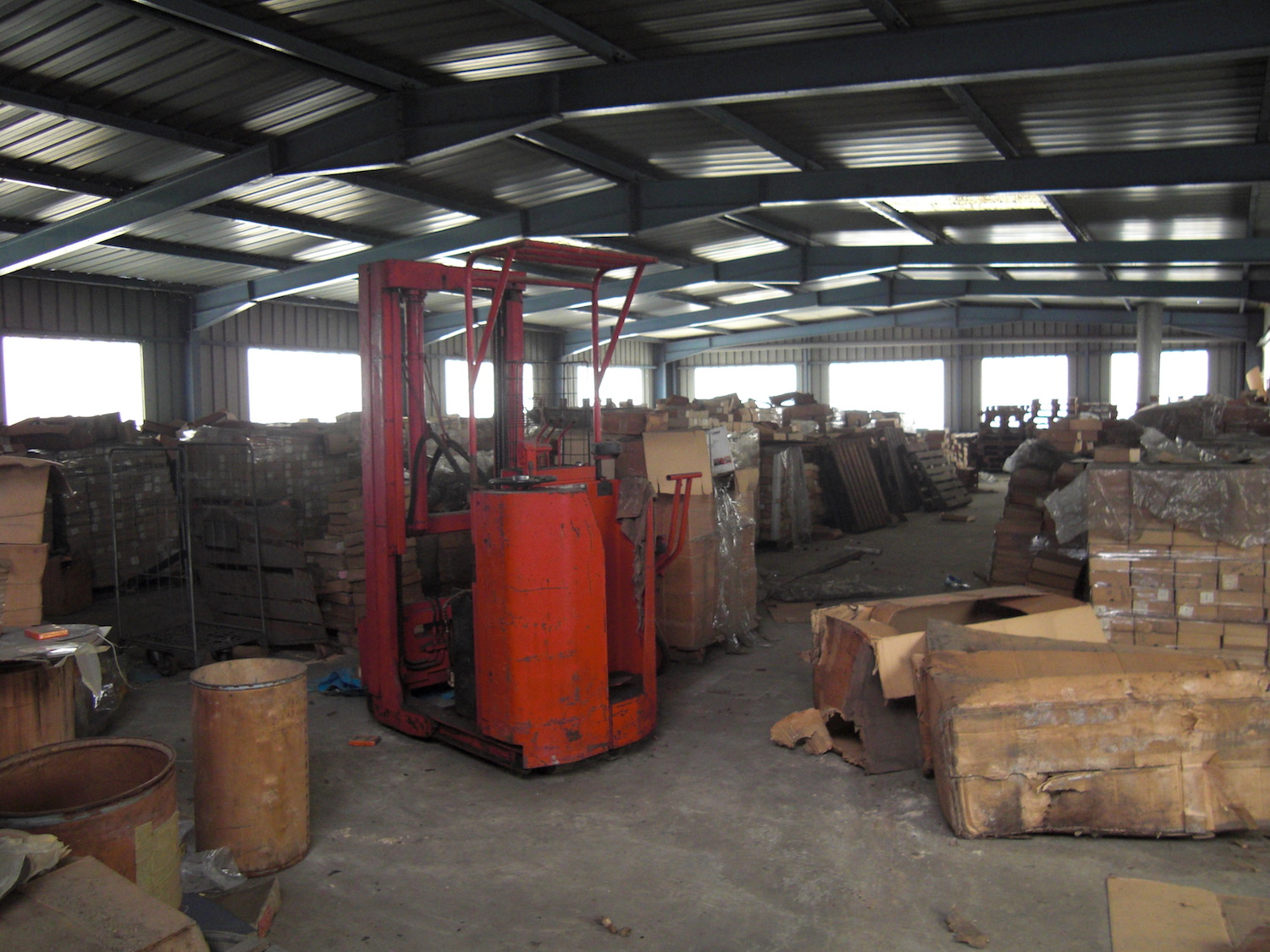 Who did it belong to and do you know why it was left abandoned like that?

The place was a former record factory. The owner was supposed to destroy unsold copies of records, then recycle the wax to make new records. But in 1985, the place went bankrupt and everything that wasn’t destroyed remained intact until the day I came, more than 20 years later. The dude I dealt with was just a family relative who happened to live here. Since nobody cared about the records, he finally tried to sell them to make money.

What records did you discover there?

It was incredible, a digger’s dream. All the records were in mint condition. Jazz records, mint Pete Brown & Piblokto!, sealed copies of the Glastonbury Fayre boxset. I dug for three or four hours, only making it through four or five of the dozens of pallets. I ended up with 200 or 300 records, trying to be picky, because I hadn’t brought much money. Highlights included 3 copies of La Planete Sauvage OST, 3 copies of the third Marc Moulin Placebo LP, 3 copies of 100% Pure Poison, and French pressings of the original Skull Snaps album. I took the first lot home, came back with more money and carried on digging into the night. I did this twice a week for about 3 months, and then brought a friend to help me for another 3 months. 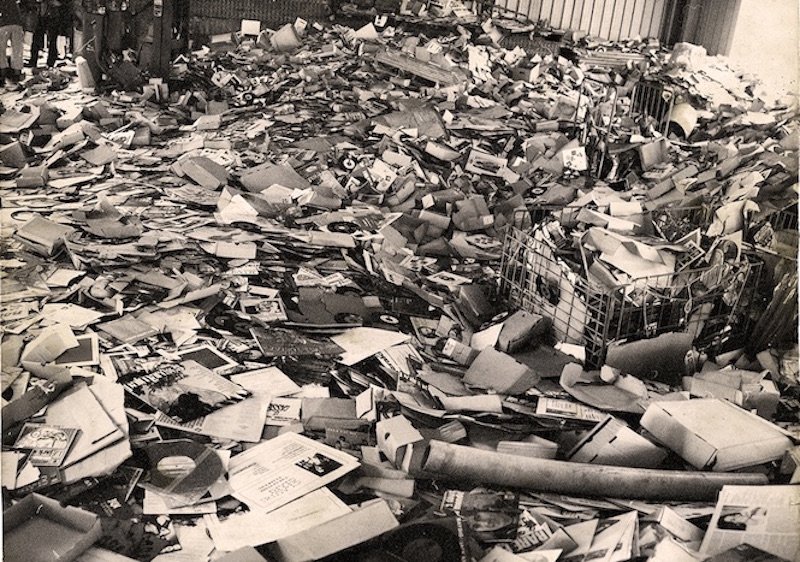 It sounds crazy now, but the place wasn’t that interesting, musically speaking, in the end. I can count on both hands the really interesting records I discovered there. Of course, it was great money-wise. There were multiple copies of very sellable original French pressings, especially the pop and rock records I sold by the dozen at the Utrecht record fair. The most interesting record I found was Armitage Road by the Heshoo Beshoo Group – an incredible piece of South African jazz. It’s probably the only one to deserve a proper reissue.

What happened to the warehouse after you left?

The place has now been destroyed. Over the years since I left the place for good, dozens of record dealers went there to buy records from that old dude. It became really crazy. Some people sold the address to foreign buyers, some fought for records, and others came at night or injured themselves trying to climb in through the backdoor.

Photos by Thomas Pasquet and Frederic Thiphagne. Thiphagne’s pictures were taken the following year, when the records had already been pawed over and strewn across the floor.