Art and nature collide in the mountains at Elevation 1049

“This perfect place in the mountains where the rivers flow so gently, through the spectacular valleys, where beautiful people busy around in their happy town.” The saccharine, subtle irony of Superflex’s The Return of Pablo video captures something ineffable about the Swiss mountain town of Gstaad: “A place where tragedy lives as a distant reference in the sky, making it all, even more perfect.”

And yet, to hold an arts festival in the harsh and changeable environment of the Alps is to embrace not perfection but adversity. Initially planned as the culmination of a trek across the Glacier 3000 where the work’s totem centrepiece is placed, weather conditions forced the relocation of Superflex to a small cattle shed above the town, where viewers warmed themselves on bowls of bone-marrow soup. Like the film’s protagonist, Pablo the bearded vulture, we are all temporary visitors in Gstaad, encountering nature and scavenging what we find there. 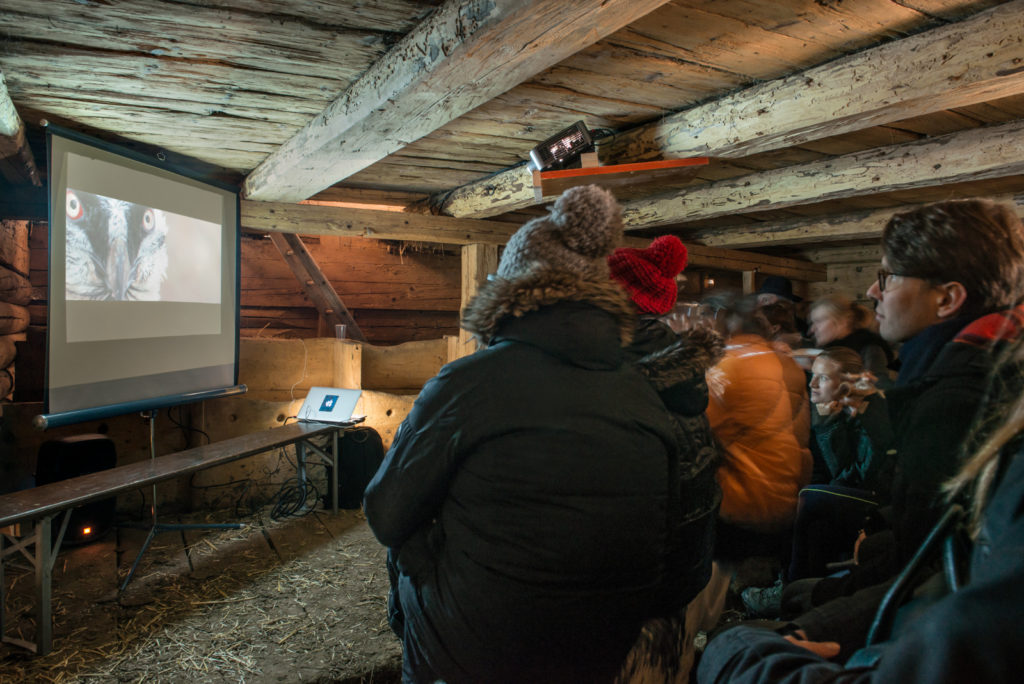 In its second instalment, Elevation 1049 involves a commitment from the off. Take the serpentine train from Lake Geneva and you begin to sense adventure is not far away. It’s a trip that eleven of the world’s most exciting and intrepid artists have made with the aim of creating site-specific works that, as curator Neville Wakefield says, “address the landscape and how we exist with it.”

The piece that perhaps tackles this most urgently is Douglas Gordon & Morgane Tschiember’s As Close As You Can For As Long As It Lasts, a circular pyre inspired by the tradition of communication without seeing (whisper it… yodelling) set in a ‘loch’ or hole above the town like Mount Chimaera and its fire-breathing namesake in the Iliad.

“Everyone should know how to build a fire,” says Tschiember during a talk at the Palace Hotel, as she and Gordon light cigarettes. Playing at Prometheus, the pair hope, as Gordon says, “to build up the mythology of the place by repetition,” and create a pilgrimage to the spectacle. The piece is soundtracked by wolves, whose howls guard the fire from the surrounding trees, only adding to the sense of fear. “The fire can save you,” Gordon quips almost prophetically, “but it is not without danger.”

Unlike many mountain towns, Gstaad is just as famous for its social scenery as it is for its natural one. For every medieval myth of devils and landslides are two from the earthly realm of celebrity. Hushed voices will list the actors and personalities brought here by Swiss playboy Gunter Sachs and his then-wife Brigitte Bardot. Roger Moore, Elizabeth Taylor, Richard Burton and Grace Kelly all settled here briefly. Beautiful people abound.

This exerts its own power on the place, and you only need a day or two to feel its magnetism. One moment you can be swaying to shotgun blues in Sachs’ pool-house (so James Bond it’s no wonder Roger Moore felt at home), the next you can be sipping schnapps in the famous lobby bar of the Palace hotel – a multi-tired neo-Habsburg wedding cake of a building perched in the centre of the town. A story circulates that Michael Jackson once made a abortive attempt to buy the hotel.

Whether you’re inside or out, Elevation succeeds fully in its aim to re-stage the viewer’s relationship with the environment, where physical experience becomes central to the work itself.

Housed in a semi-permanent structure on the fringes of the town, Ryoji Ikeda’s data-driven test pattern installation throws up a digital mirror to the monochrome environment with a piece so exhilarating (and exhausting) that your gut reacts before your eyes can settle. Data streams like an avalanche beneath your feet so that even here, sheltered from the elements, the physical sensation is almost overwhelming.

Other pieces, like Tatiana Trouvé and Grace Hall’s in the building next door, are more literally immersive and require you to get stripped down to your togs and submerge yourself in the town’s public pool, alongside residents doing laps around you.

Outside, the primary sensation is cold. Gordon and Tschiember revel in forcing their audience to travel beyond their comfort zones, while at her show-stopping performance of Same Same Joy, Cecilia Bengolea invites the audience to join her in doing the same.

The culmination of an educational trip to Thailand to learn the technical and spiritual art of Thai boxing, Bengolea cut together an acid-laced dream sequence where animals and pugilists coexist in harmony. Soundtracked by a compilation of pulse-pounding electronic music and confrontation French grime from the Paris suburbs, Bengolea dances in the snow in front of the projection. “It’s possible to develop different steps because the music already takes various influences form dancehall, drum n bass, electronic music, garage,” she says. “The dance can bring various influences into one body.”

In a similar sense, the piece embodies three very different environments – Bangkok, Paris and Gstaad. “It was very thrilling to imagine the mountain and me alone in nature addressing this rage from the Paris suburbs,” she says. The connection is not as far-fetched as it may seem. The ritual animals of Thai boxing find analogy in Paris rap slang, where “they call the suburbs the zoo, because it’s like a jungle.” 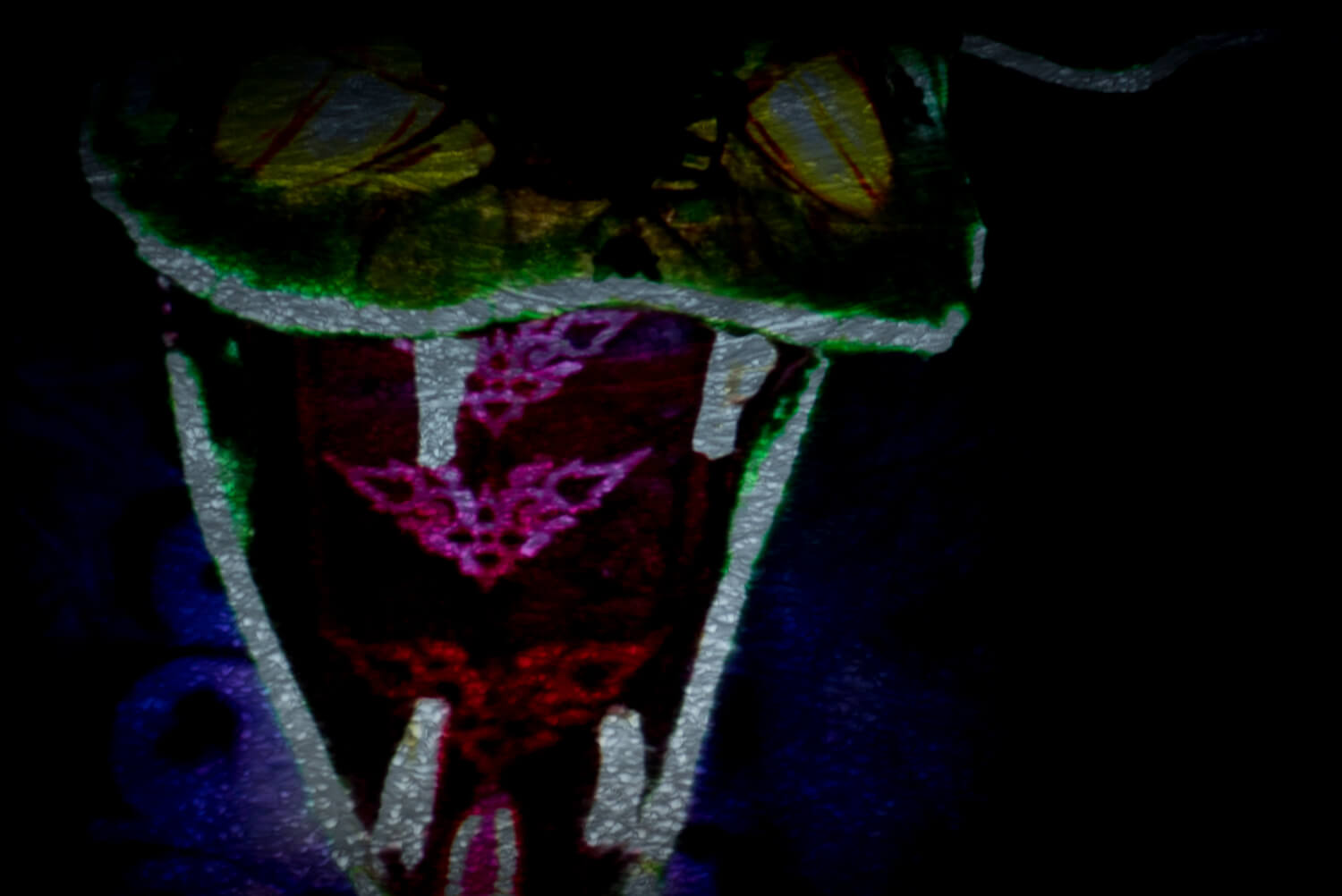 On the other side of the valley, a trail along the Wanderweg Schönried will lead you to Rosa. The work of Belgian artist Michaël Borremans, whose band TC Boring raised the curtain on the festival, the monumental structure reveals itself as you draw closer. The figure, clad in pseudo-ecclesiastical garb first seems to be struggling against the prevailing blizzard, before it becomes clear he is in fact lodged head-first in the ground, as if fallen from the sky.

Like the vulture Pablo who drops his bones from a great height to extract the marrow, or Aeschylus – killed by a falling object, on whom the piece is loosely based – Borremans’ Rosa hints at the fear of greater forces above. To re-visit the narrative of Superflex, Gstaad is “a place where tragedy lives as a distance reference in the sky.”

By taking art out of a controlled urban environment (from one white-walled space to another), Elevation 1049 creates a sense of perspective that is thrilling, almost liberating in its deference to the environment. In a winter that locals say is the warmest in a generation, Elevation reminds us that human interactions with nature can be both so futile and so profound.