Behind one of the most exciting albums of 2018 so far, DJ Taye is taking Rashad and Spinn’s legacy into new realms. Inspired by Arthur Verocai as much as Teklife, he tells Will Pritchard about his desire to see footwork taken seriously as “real music.”

DJ Taye is sitting in a branch of McDonald’s somewhere in Los Angeles, having just wrapped up a tour of the US supporting New Jersey beatsmith Flamingosis.

His attitude isn’t unfounded. Footwork – the bracket into which DJ Taye’s music most readily fits, if it truly fits anywhere – is, for many, something of an acquired taste.

It’s a sound typified by rapid, heavily syncopated, 160bpm polyrhythms that tussle for space alongside flurries of repeated vocal samples and groove-heavy basslines. Sonically, it grew out of Chicago’s juke and ghetto house scenes, but arguably finds its true origins in the symbiosis between DJ and dancer – in fact, the type of dancing referred to as footwork (or footworking) predates the music that has since taken the same name. Many of the genre’s leading proponents started out as dancers, typically performing as members of battle crews at ghetto house parties in the mid-to-late nineties.

Born in Chicago in 1994, Taye (aka Dante Sanders) was still in school when footwork pioneers like RP Boo and DJ Clent were taking inspiration directly from the dancefloor back to the studio in an attempt to develop the ghetto house template into something that would allow for more complex and expressive dance movements. He grew up, he says, a fairly regular kid. He was interested in music and played the trumpet in his school band (he also had a drum kit but, he says with a wry dose of hindsight, “didn’t really go anywhere with it”). As he approached adolescence he turned his talents to making hip-hop and rap beats, inspired by Atlanta producers like Zaytoven who had stepped away from traditional boom-bap stylings. It wasn’t until 2008, when he met DJ Spinn and the late DJ Rashad, that he decided to ratchet up the tempo of his beats and focus on making footwork.

“I didn’t like footwork until I heard Rashad and Spinn!” he admits with a laugh.

Four years earlier, Spinn and Rashad had formed Ghettoteknitianz (or Ghetto Tekz) – a crew of producers, DJs and dancers who were beginning to coalesce around the city’s underground footworking scene. In 2010, Ghettoteknitianz became Teklife and from there the brand has blossomed, growing a global following. “Teklife has had everything to do with my musical development,” says Taye, who joined the crew as its youngest member just as the sound was beginning to gain traction in Europe. “Teklife to me is like real hip-hop – like real hip-hop. The way we play it, the way people dance to it, and the way it’s so free form.”

It’s an interesting assertion, and one that Taye expresses quite uniquely – both in conversation and in his music. In the same way that hip-hop pioneers would pull together breaks and samples from a broad spectrum of recorded music, Taye’s take on footwork is typified by his desire to place unusual sounds in new and different contexts. He talks about using Shazam to identify interesting tracks that he hears playing in shops and restaurants, and waxes lyrical about everything from Brazilian funk (Arthur Verocai is a particular favourite) to Serbian jazz.

“I started doing more sampling when I came to footwork, just getting more free with it,” he explains, “I’m always looking out for weird sounds, and then thinking about how I can put it into my music.” His music is underpinned by a collaborative approach: not just in the sense of working alongside other artists to write tracks, encouraging them to add their perspective to the creation in process, but in a more basic sense of a controlled collision of different sounds.

On new album, Still Trippin’, he brought in a whole host of Teklife affiliates and collaborators. But rather than allowing them to simply play to their strengths, he said he would push them outside of their comfort zones to see what they could make together. He got DJ Lucky rapping in the vocal booth rather than letting him stay behind the mixing desk; Fabi Reyna was made to put down her guitar and sing instead; he put Chuck Inglish, more used to riding retro rap beats, on a juke tune. The record is discernible as a footwork album, but also soaks in and shows off a whole host of outer influences from rap to chiptune, g-funk, breaks, rnb and more. “I was just trying to do new stuff, period,” he says definitively, before adopting a more introspective tone: “I mean, by me just being the youngest in Teklife I feel like I have more responsibility to make sure that things flourish in the right way.”

He seems a little uneasy at the expectations that being held up as the next generation of Teklife have brought, but more because he views the project as a collective effort – something that he’s just playing his part in. Tied up in this feeling, too, is the passing of Rashad, who died following an accidental drug overdose in 2014. Taye sees the role of Teklife now as continuing what Rashad started. He says he’s been trying to find more opportunities to exercise while on tour in order to maintain his fitness levels and improve his dancing; the physical movement remains as rich a source of inspiration as when Rashad would show him battle videos online. “I just wish that he could have had the chance to collaborate with more artists and more rappers, so he could showcase [the potential of what we’re doing],” Taye explains, “you can dance to it, it can be a song, it can be something that people just listen and vibe to. It’s real music.” And this is arguably what it’s all about. Footwork music isn’t just divisive, or a ‘love it or hate it’ experience: Taye feels it’s disregarded as an artform. He’s not alone. “For the whole past decade people have been trying to push it, but other people want to play like it’s not real music,” he says, with a bite to his words.

More than just expanding the boundaries of the genre, then, Taye wants to see it taken more seriously. As well as his ambitions to bring more performative elements to his live show, he talks about ideas he’s developing for mobile apps and video games that will give more people of different ages the chance to interact with the music, or be able to experience it in a new context. “I’m trying to make them understand it,” he says, “because once people start making the connections, they’re like ‘oh!’ – and start digging through it and hearing things differently.” The struggle for acceptance is something he recognises as a further link between footwork and the experimental jazz, rnb and funk records he turns to for samples. “Oh, there’s definitely a lot of connection,” he says, whilst taking quiet solace in the legendary status that those foundational artists have since been garlanded with.

Ultimately though, he says, the best way to understand his music is through its concurrent dance form. Indeed, he goes on, like reaching some higher plane of thought, it’s perhaps those who’ve stopped trying to understand what they’re hearing and are just moving with the beat who are most likely to get it.

DJ Taye’s Still Trippin’ is out now on Hyperdub. 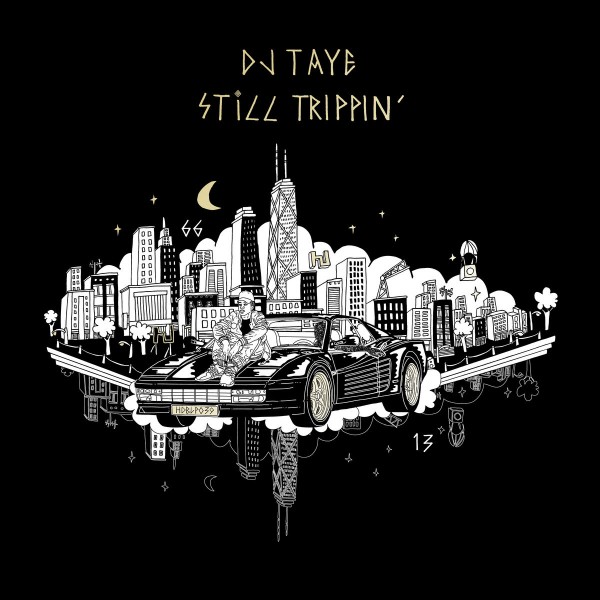