Kinshasa band KOKOKO!’s album Fongola is an acoustic-electric wonder made with DIY instruments that are as fantastical as the sounds they create. Producer Débruit talks to Chris May about the processes and inventions behind the album.

Dividing his time between London, Paris, Brussels and Kinshasa, electronic producer Débruit, aka Xavier Thomas, describes himself as “a musical explorer who imagines alternate worlds and how they would sound.” His 2016 album, Débruit & Istanbul, dug deep into traditional Turkish music while simultaneously shapeshifting it. With KOKOKO!, Fongola does the same for the modern dance music of the Democratic Republic of Congo.

Débruit’s involvement with the Kinshasa music scene came about through the film director Renaud Barret. Three years ago, Barret was filming System K, a documentary about the body-art movement in the city. He commissioned Débruit to fly out and make field recordings for the soundtrack.

What began for Débruit as straightforward audio-reportage turned into a much broader, personal project involving several extended visits to Kinshasa. While working on System K, he met a collective of creators of DIY musical instruments which includes Boms Bomolo and Dido Oweke, and later the singer and dance-troupe leader Makara Bianko, all of whom figure large in KOKOKO!. The two groups lived in different parts of Kinshasa and did not know each other. Débruit brought them together, added his own electronic inputs, and Fongola is the result. Here’s how it was made. 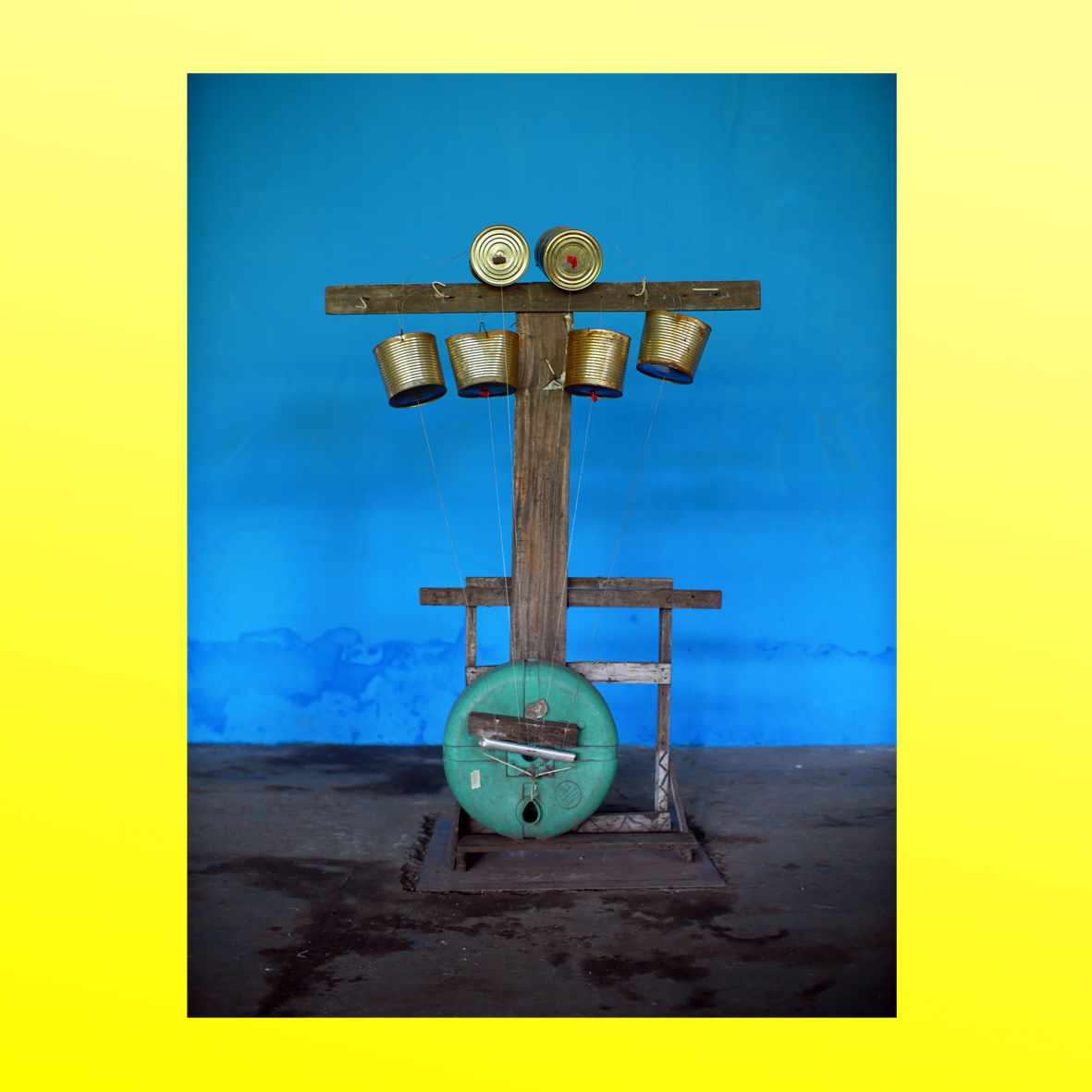 What did you find when you arrived at Boms Bomolo’s compound for the first time?

It was like something between an exhibition and a gig. It was extraordinary. There were some really sculptural instruments, man-sized constructions like the Jésus Crise harp, instruments made out of scrap metal and bits of wood. I had never seen instruments like them. They looked out of this world and they sounded fantastic. Straight away, I heard resonances with some of late ’70s, early ’80s New York punk bands like Liquid Liquid and ESG, but without any intentional references because the Congolese guys hadn’t heard any of it. 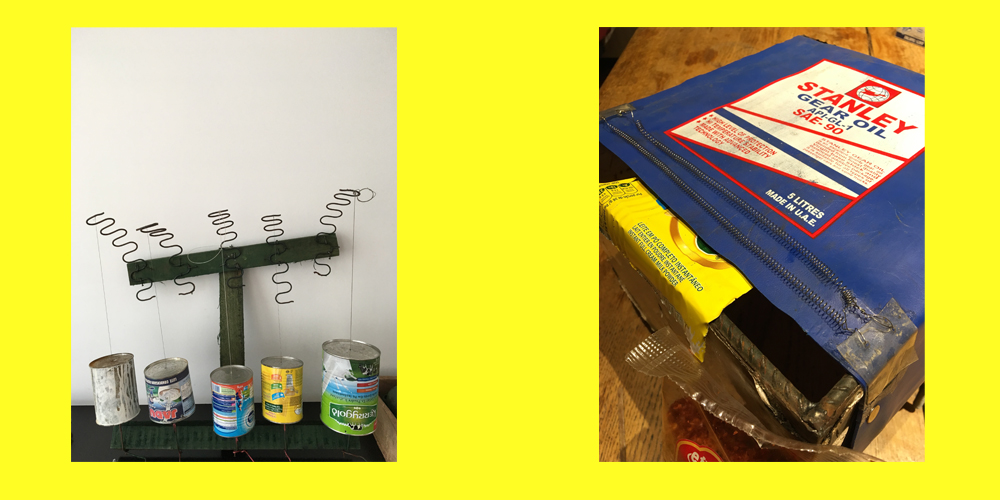 Please talk us through some of the instruments. Could you start with the Jésus Crise?

The Jésus Crise was created by Dido Oweke. It’s a sculptural harp in the shape of a cross, the height of a man. Dido got an image of it in his head and then went ahead and built it. It’s the shape of a Catholic Cross. There are four big powdered-milk cans for resonance at the top and a round plastic barrel at the bottom for the bass. There are five strings. You play sitting in front of it with a home-made plastic pick. It has a really nice double-bass sound and also high resonance at the top, so it’s hard to record. It’s also really hard to travel with. We tried on the first European tour in 2017 but it was impractical. It can be heard on track ‘Kitoko’.

Are all the instruments acoustic? Or are electronics involved in some of them?

There’s the electronic talkbox I made with the singer Love Lokombe. It starts with one of the old cassette players that you used to have in a car. That’s plugged into a really loud tweeter. Inserted into the tweeter, there’s a bendy plastic hose from a bathroom shower fitting. Then you isolate the tweeter so the sound only comes in through the hose. To record it I fed into it straight notes from a synth and modulated them with the voice. The sound is a bit like the sound Roger Troutman’s Zapp Band used – but it looks totally different. We’re now onto version two of it, using an MP3 player. That allows us to control it better, we can switch channels quicker than on the cassette – on the cassette it’s tricky to find the right place on the tape. Also with the humidity out there, the cassette machine stopped working after a while. It can be heard on the track ‘L.O.V.E.’

What about found instruments?

There’s a lot of found metallic percussion, like you can hear at the beginning of ‘Tokoliana’ for example. And there are also customised found instruments. One we use is made from the metal rim of a motorcycle wheel. Attached inside it are two metallic dining plates, each with a pair of strings going across it. You pluck it with your fingers or use a home-made plectrum. It has a beautiful sound. That can be heard on the track ‘Singa’ for example.

Are the drums used on the album also home-made?

Yes. The kick drum – or one of them, because we have many – is like a big square metal cube, about a metre in size, taken from a ventilation system. Like those you see up on the walls of buildings. It has the casing of a big plastic tank stretched across it. That forms the drum skin. It makes an amazing sound. The snare drums are sometimes made from a square metal oil container about a foot high. The skin is made from found plastic stretched across and held in place by big screws running through it down the outside of the oil container – it’s stretched very hard to give it a resonance. Then, below the skin, there are various metal objects attached to give the snare effect. 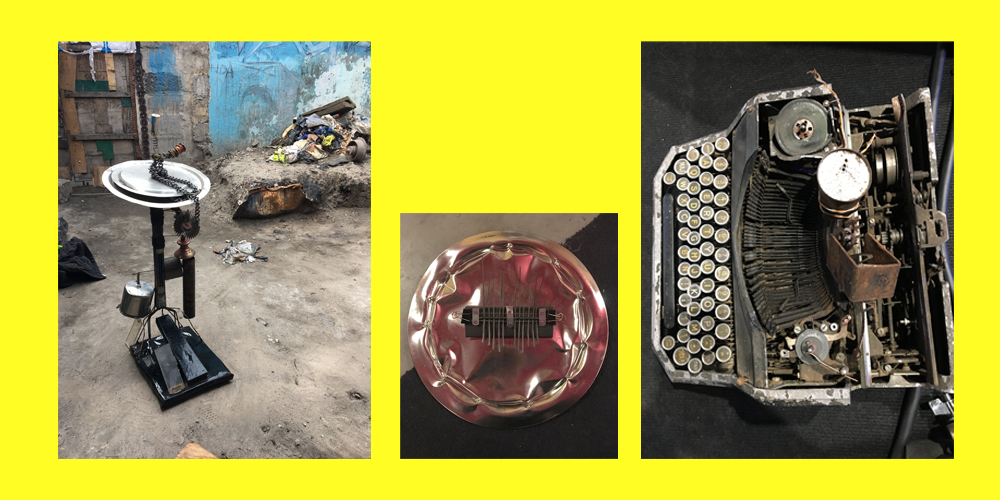 There is an infinite number of instruments actually. They break or disappear and with the the humidity, things don’t last very long. Plus people are always making improved models. Boms told me that when he started making instruments, the older people in the compound used to think he was crazy, collecting all this rubbish. Sometimes when Boms and the guys were out, they used clean up the compound and throw the instruments in the fire.

No. They didn’t know each other until I introduced them. The musical instrument creators lived in a neighbourhood called Ngwaka, which is near the main market. Makara lived in another neighbourhood, Lingwala, further out, which is very lively at night. He had a group of maybe forty dancers and he would do a public rehearsal-cum-gig with them for like five hours every night. Makara was already doing something with electronic loops. He would record four or eight-bar loops and repeat them for half an hour or more for the dancers to perform to – singing to them and setting them in a trance. He uses a really loud, distorted sound-system with lots of feedback.

When the musical instrument creators started to come by we realised, “wow, this is clicking” – the combination of the instruments and Makara’s charisma and energy is happening. So little by little we started recording. 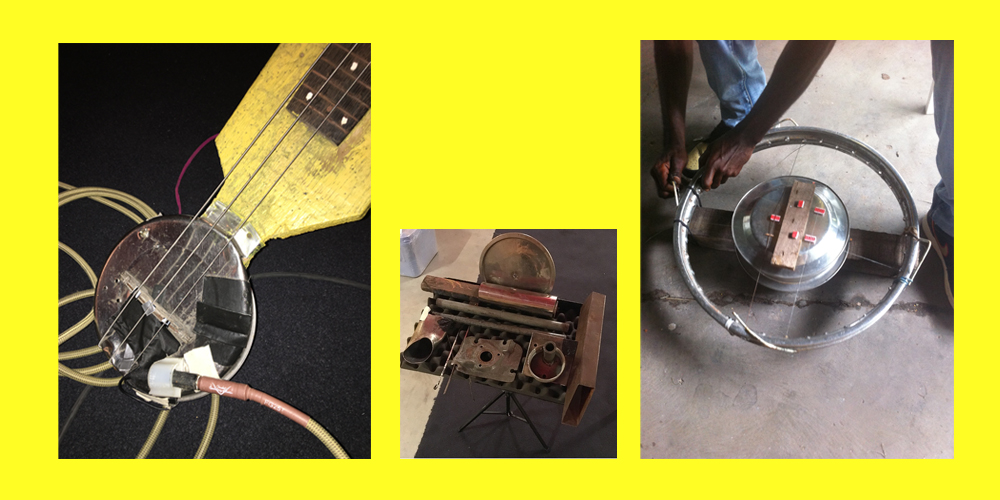 Where did you do the recording?

There were not any regular studios that we could use and Kinshasa is so noisy that it’s really hard to find a place where you can record without picking up a heap of ambient sound. But we found a compound in an area called Bonmarché where there was big room in which we could build a little corner for recording, using mattresses. At night people would stay and sleep there, and then in the day we’d use the mattresses to make a square recording space because the room was too big. They were also used to keep noise out and minimise the reverb.

At the beginning I didn’t want to influence what was happening, I just wanted to document what they were doing. But then, after about three weeks, I started bringing my drum machine and synth, and that locked in with Makara because he was already using electronic loops. We did a massive block party to celebrate the first month of work. 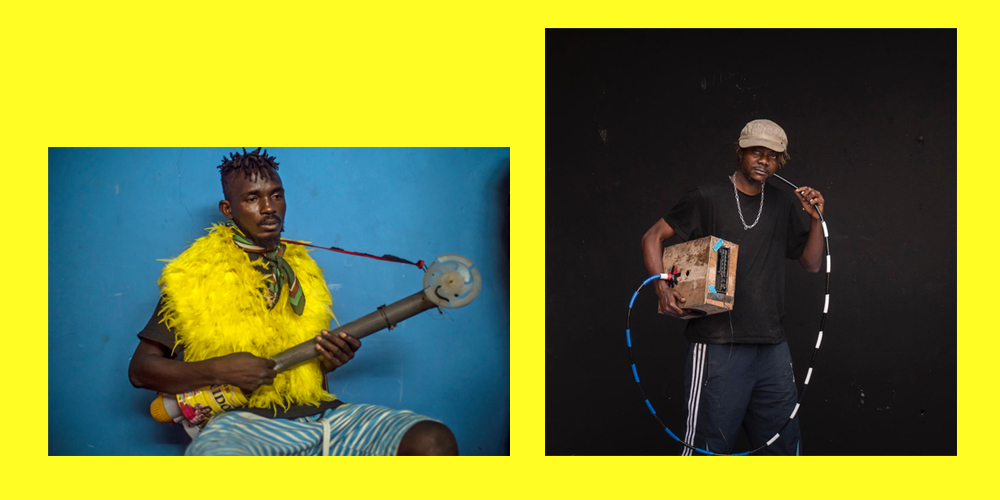 Using sound systems and electronic instruments must be a challenge in Kinshasa, given all the power outages.

It is. But the people know which areas get power at which times and so they can run power lines from them to their compounds. In his compound, Makara has four different power lines coming from different places. When the power goes down he literally unhooks the line and hooks up another. It’s very dangerous.

Kinshasa has been a centre of DIY instrument making for at least twenty years. Konono No. 1’s first album was recorded there in 2004. Why Kinshasa?

The extreme adversity that faces people in the DRC might be the answer, or part of it. The trend certainly started because musicians couldn’t afford to rent or buy the instruments available in the shops, so they’d copy them with home-made versions. The idea caught on. Pretty much the only people in Kinshasa who can afford to buy regular musical instruments are pastors from the evangelical churches. A lot of musicians work for the churches because they are the only people paying musicians and providing instruments. 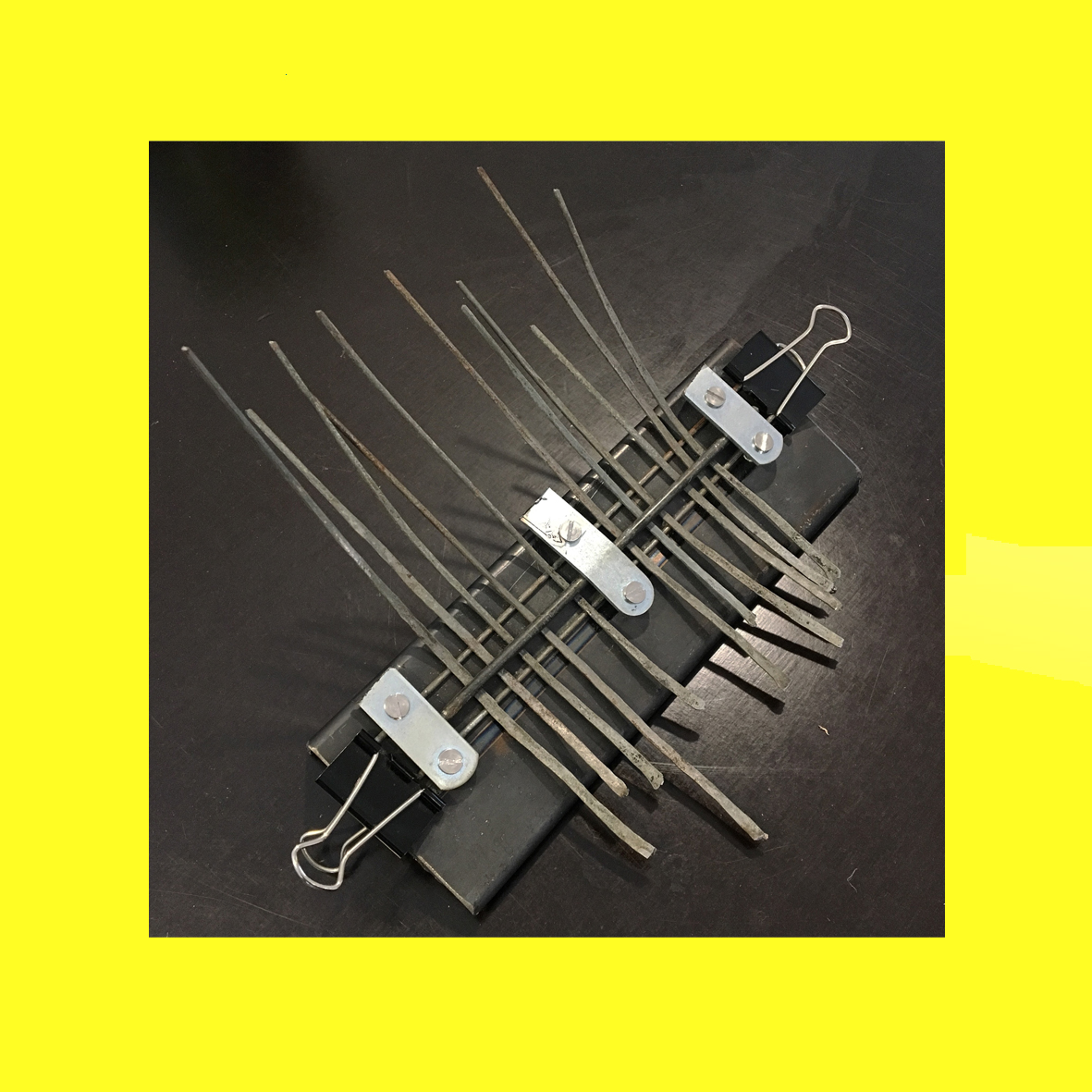 Whatever the genesis of the concept, it struck a chord with the people’s creativity.

It’s quite widespread now. Boms Bomolo and the other makers involved with KOKOKO! aren’t the only ones creating instruments in Ngwaka. There are others, there’s a lot of experimenting going on in the neighbourhood. It’s all about making unique instruments with unique sounds. People really get into the details. They try to get it all perfect, to tune things to get the sound they have in mind. The guys check the tonalities with the dial on their smart phones, to see if the tunings sound harmonious together.

People have different ways of creating the instruments. Sometimes they get an abstract idea and then try to make it real, like Dido did with the Jésus Crise. You can also come across something that is ready made and sounds great already. Like the bell sounds at the beginning of ‘Tokoliana’. One is made by an old clothes iron, another by a car engine part. A third way is when you collect many things and start putting them together and see what sort of sound they make. But however you have created an instrument, the next thing is learning how to play it. When you make something that never existed before you are starting from square one.

Nas' sophomore album It Was Written reissued on clear vinyl 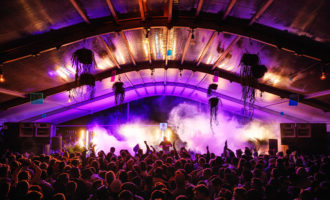 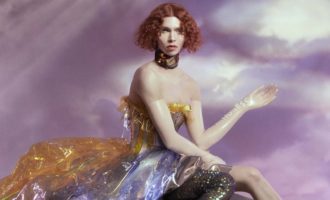