Once a chain with seventeen stores across the country, Discolombia has been in business for over fifty years. Now there’s just one shop left – housing all the remaining stock – and it will make your pulse race.

Discolombia’s unassuming shop front not only belies the number of records within, but also a remarkable history which is irretrievably bound to the culture of Colombia’s Caribbean coast- a land whose villages amalgamated into the magical realism of Gabriel García Márquez’ Macondo, and birthed all manner of folkloric music within its melting pot of indigenous, African and Latin sounds.

Initially a chain of record stores along the coast, Discolombia and its adjoining label Felito were the go to source for new and second hand LPs from the ’60s onwards, playing a key part in developing the Champeta and Palenque sound, and developing in tandem with the Picó street parties, where volume rules as the faithful gather around lavishly painted day-glo sound systems. 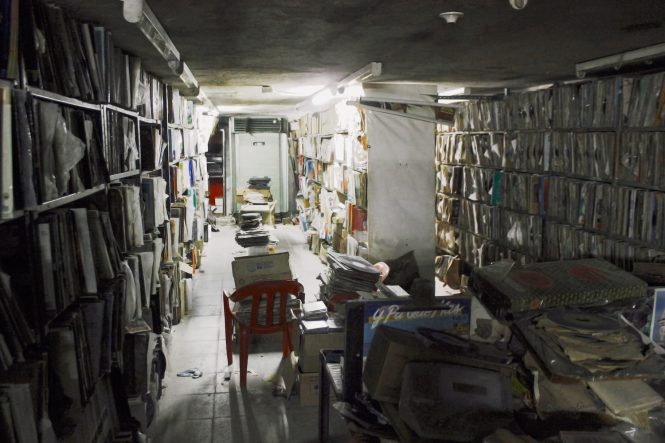 With many a Picó soundsystem still taking pride of place on a costeño porch the legacy still burns strong, and despite a massive downsizing as CD piracy became the normality, the Barranquila Discolombia has managed to weather the changes, and stands as the last vinyl-only store in the city and indeed within the chain.

Founded by Felix Butrón Snr, the explosion, decline and recent resurgence in vinyl sales has been lived out as a three-generational family affair, and with 50+ years of history in the business behind them we talked to Felix Butrón Jr and his son Shane Butrón about the unique story of Discolombia. 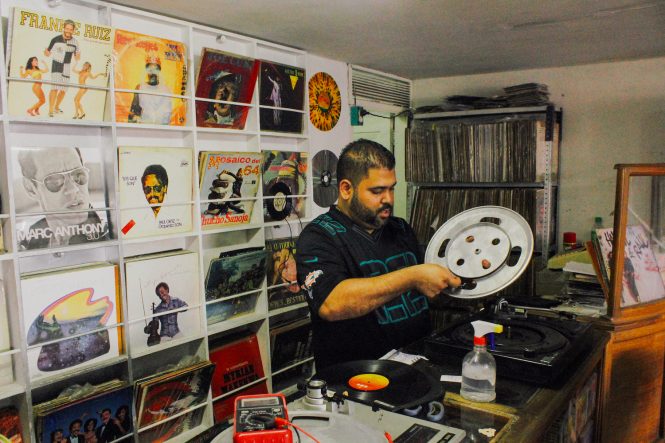 The history of Discolombia stores is over fifty years old, could you tell us a little bit about it all?

Felix Butrón Jr.: I would have to start with my father, Mr. Felix Butrón. He was an entrepreneur and he was a music lover. He was born in Magangué, Bolivar – a little village next to Magdalena River. He began to put on concerts in Magangué at the local theatre that used to belong to his brother. The shows used to take place in November, you know, it was like Barranquilla’s carnival or the November festivities in Cartagena, it was coming from the same place. It was the year of 1960 and at that time he was presenting big names of the folk music scene like Alfredo Gutierrez, Los Corraleros de Majagual, Aníbal Velázquez and a few international orchestras.

At that time, there was a tiny music store in Magangué and since my father was doing all right with his business, in 1962 he decided to buy the store and name it ‘Dicolandia’. But the name was already taken so he changed it to ‘Discolombia’, and that’s how our records stores were born. The stores expanded very quickly and by the 1965 we already had stores in other cities on the Caribbean coast like Montería, Sincelejo, and Valledupar. That same year, we opened our store in Barranquilla and by the end of 1966 or 1967 we were a chain of over 17 stores all over the coast. 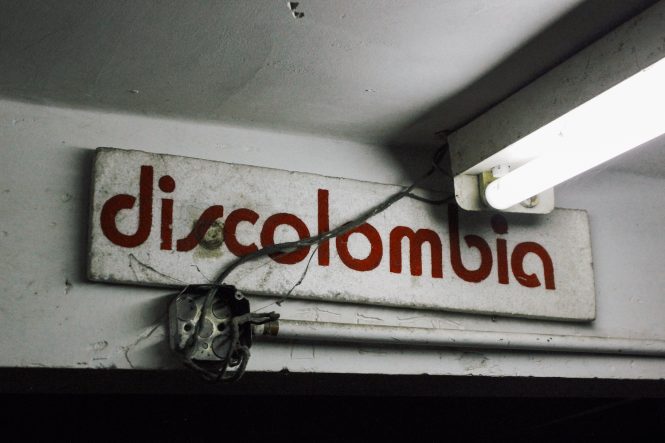 And how about the history of Felito Records?

Felix Butrón Jr: In 1973, we already had a strong infrastructure with the record stores and then an opportunity to produce an artist called Esthercita Forero appeared and my father didn’t hesitate to take it. Esthercita is a huge name in popular music here on the coast. She is known as ‘the bride of Barranquilla’. So they recorded and named that record Érase una vez en la arenosa (“Once upon a time in the sandy city” – a reference to the strong December winds that blow sand into the city). It included great hits like ‘La Guacherna’, a big carnival song, and ‘La novia de Barranquilla’ (Barranquilla’s Bride). I mean, she is an institution here in Barranquilla. That first work was released under the name ‘Tiendas Discolombia’. 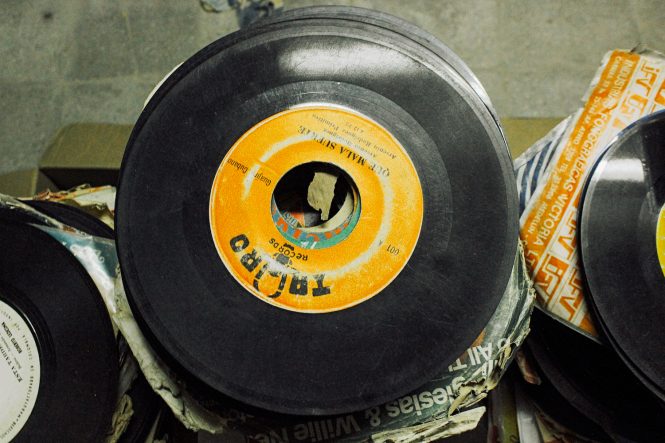 Then on another occasion, my grandfather was throwing a little party at one of our houses and he invited a band called ‘Los Hermanos Sarmiento’ (The Sarmiento Brothers) to entertain the party where they played some unreleased songs. My father went to them and said: “Hey! Come here! I’m interested in those songs.” They ended up releasing a few singles; and one of them was ‘No llores mujer’ (Woman, don’t you cry) which ended up being a big hit.

So we kept releasing singles and albums. We took big risks, like Dolcey Gutiérrez, an artist that had seen his 15 minutes of fame come and go. We hatched a plan to produce a new record and make him famous again. And we did. We released a big hit called ‘La Picada Comelona’.

How did you get involved in the business?

Felix Butrón Jr: The label was properly established in 1977. At that time I must have been 27 or 28 years old and I was fully committed to the music business, helping my father with the record stores while sharing the responsibility with one of my sisters. So my father decided to move to Barranquilla and become the head of Felito Records.

The record stores and the label worked in tandem and were very lucrative for over 20 years, until new technologies appeared, like CDs. That was the beginning of piracy and was the end of it all. By 1995 we began to close stores and by 2000 we finished them all and left a few little stores at the center of Barranquilla, where we used to have our storage. We still have lots of stock and lots of vinyl of our own catalog in there.

And Shane, you now run what is left of Discolombia. How did you get involved?

Shane Butrón: Out of all my brothers and sisters I was the one who was interested in music ever since I was a kid. I used to love Picó parties and used to hang out a lot with my father and I was into all the folk music and all sorts of things that were hip at Picós. So when they closed the stores and left the main one at Barranquilla’s center it was only natural that I was the one keeping the business alive. 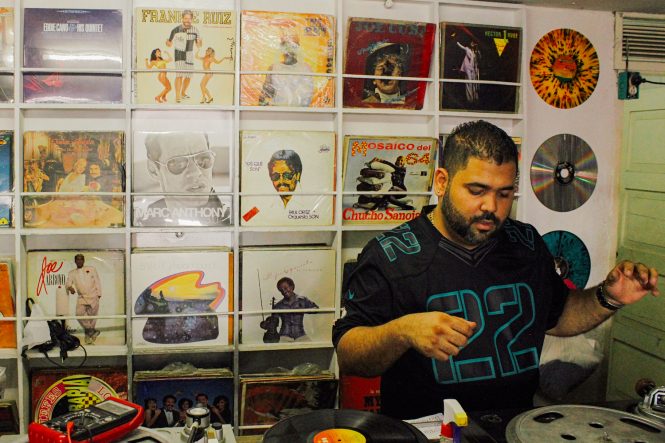 How do you acquire your current stock for the store?

Shane Butrón: Well we do have a lot of stock in the warehouse, but we need to keep buying, especially international releases and new editions because that’s what’s popular among Picós here in Barranquilla and in Cartagena.

I have two primary sources; firstly the Internet, where I find salsa, which I buy in Miami and New York City and then African music or African salsa which I find in Nigeria and France, but I don’t need to travel to get them. They know me and I have a good relationship as a buyer so they send everything over.

The other source is old collectors. You see African music is a big thing here in Barranquilla, and back in the days people used to have huge collections of records, like the one Mr. Borja used to have. He was an engineer who used to work for a massive company. When he passed away, he left a collection of over 5.000 records that his sons didn’t want anymore so they sold it all. A lot of buyers traveled to Barranquilla to buy those records, particularly the Mexicans. I have around 300 of his records.

Felix Butrón Jr: Back in the old days, record labels used to come to us to sell their catalogues, that’s how it used to work. And we had our own catalog of course. It took 10 years to build it. That’s still unbelievable to me. Other records did theirs in over 30 years, but my father worked hard and did it very fast.

Shane Butrón: We have a very wide stock right now and it’s still growing. The stores used to be organised by labels; Discos Fuentes, Sony etc. Now that labels are not that important, we organise them buy rhythms; salsa, tropical, African. That’s easier for buyers as we have a stock of over 50,000 records. 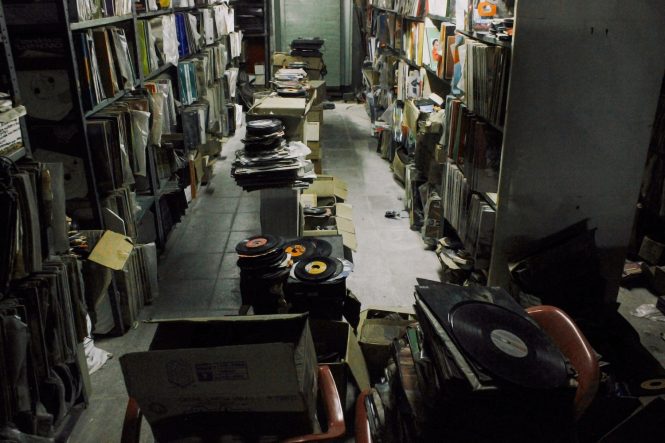 What is a typical day for you working in the store?

Shane Butrón: We open every day at 9am and then people start to show up. Picós culture is very hip right now, so we do have lots of people coming and going and they end up having little gatherings here at the store. We call it ‘La Tertulia’ which is like a little reunion to talk and discuss about music.

Those who have Picós soundsystems and those involved with the parties are big buyers. Japanese people come very often and some English producers too. But our biggest clients are Mexicans. They have a lot of our stock. One of our biggest clients is Alejandro Perea, from México. He owns a shop at Mexico City called ‘Colombia Chiquita’ (little Colombia) and also, owns a Picó called ‘El sonidero’ and another one called ‘El Sonido y La timba’. He travels a lot to Barranquilla.

How has the music scene in Barranquilla changed?

Felix Butrón Jr: The music scene has changed all over the world. I think it has to do with the fact that radio stations are the ones in charge of saying what’s a hit and what is not. It used to be the other way around. Picós used to be in charge of saying what was important in music and what wasn’t. That was back in the ’50s and it extended to the ’60s and early ’70s. If an artist or a song were popular at the Picós, the radio station would play it.

But radio stations changed it all with their rules. Music lost its strength, especially folkloric music. Back in the old days songs were so important that you would listen to them over a year. Nowadays, a release is on the radio for 3 or 6 months and then it disappears. But the truth is that good music is immortal. Take a bolero (a slow tempo folkloric music that has its roots in Cuba but has a rich history throughout Latin America) for instance, they’re timeless. The same for all of this folk music. I’ve been in clubs in Europe and suddenly on comes a record by Pedro Laza. The folklore of this music is still alive.

How do you feel this record store differs to others?

Felix Butrón Jr: Well back in the days we where a chain, that was how we were different. After a while, some other companies from other parts of the country opened their stores here at the coast. But we were the first to do so.

We ended everything in a period of five years and left only the record shop in Barranquilla at the centre. We have seen how vinyl is coming back now, but sales will never be as good as they were before. It’s impossible. Although, of course I can see why is are coming back. It’s a unique sound. Nothing will ever be as good as a vinyl. 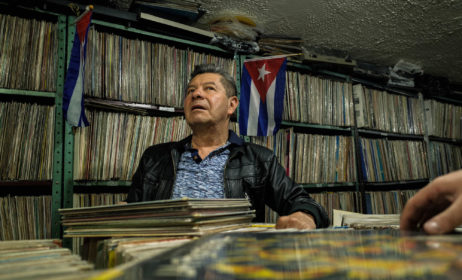 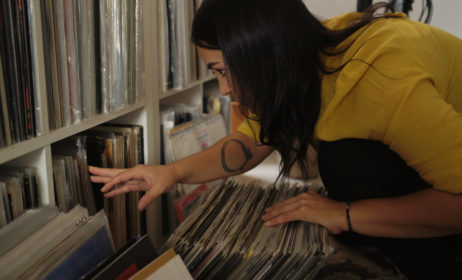