Digging in North Africa: 10 spell-binding records from the Jewish Maghreb 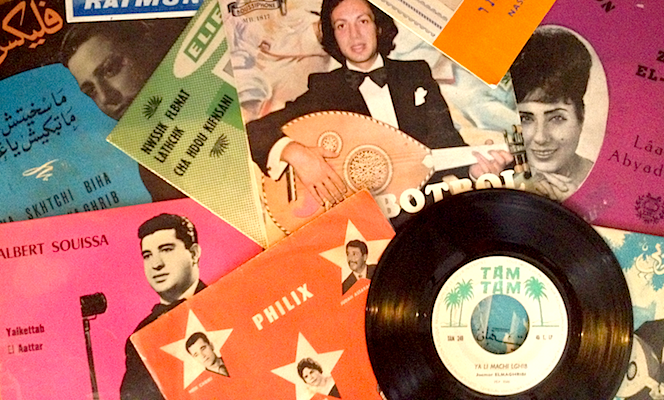 A complex region with a rich cultural history, North Africa has long been fascinating for adventurous diggers drawn to the dusty glamour and intrigue of the music and its evocative sleeve artwork. The man behind brilliant blog Jewish Morocco, Chris Silver shares years of experience digging in North Africa with ten records that explore the forgotten world of the Jewish singers and instrumentalists who once lit up the region.

At the edge of Square Bresson in Algiers, a card table laden with dozens of CD-R discs provides a forum for two men to discuss interwar North African music. With eyes scanning the handwritten Arabic titles, the potential client, too young to remember the oldest generation of early recording artists but old enough to appreciate their sound, fixates on a collection of songs by the inimitable Cheikh El Afrite. “He was a Jew,” the almost-buyer reminds the vendor, before adding, “from Tunisia. 1920s, maybe 1930s.” Without skipping a beat, the man on the other side of the table retorts, “bien sûr, from Morocco to Algeria, they were all Jewish.” Eavesdropping on the entire encounter, I was floored. Indeed, in a country bereft of Jews, such a conversation – and a positive one at that – was astonishing and all the more so because that peddler of music from an era long gone was essentially right. In the first half of the twentieth century, indigenous Jewish vocalists and instrumentalists from Casablanca to Fes, from Oran to Algiers, and from Djerba to Tunis played an outsized role in pushing North African Arabic song to its limits – and then some. Across the Maghrib, Jews not only constituted the backbone of the classical Andalusian tradition but so too pioneered emerging popular genres like chaabi. Acting as the ultimate mediators, North African Jews introduced instruments like the piano and accordion to the Maghribi repertoire while also translating global hits like the Charleston into the local dialect. Establishing record labels and creating a star network (complete with its share of scandals), these impresarios helped to light the North African stage on fire from the first years of the twentieth century through their eventual departure in the 1950s and 1960s.* In doing so, they attracted the attention of personalities as varied as philosopher Jacques Derrida (who once admitted that he wished he could write as well as Lili Labassi sang) and Coco Chanel (who felt that Habiba Messika was the ultimate combination of passion and grace) but more importantly the whole of a generation of Jews and Muslims. Some years ago, I happened upon this phenomenon of Arabic-singing, North African Jewish performers in a record store in Casablanca. From that moment forward I was captivated. Since then I have attempted to map the shellac and vinyl diaspora of North Africa’s Jewish stars and starlets, an effort which includes digging for these rare records in the dustiest of dens in Tangier, Tunis, and Tel Aviv in order to reconstruct the stories of these yesteryear cheikhs and cheikhas. Below is a (subjective) sampling of ten of my favorite tracks, some from my personal collection and others posted from all corners of the internet.

* Owing to a combination of push and pull factors and caught between competing nationalisms.

Read more from Chris at Jewish Morocco and explore the music on his Soundcloud page. Ma fiche flous translates roughly to, “Ain’t got no money,” and for those who know a spot of Arabic, you’ll enjoy Louisa Tounsia’s retort. The artist and sex symbol born Louisa Saadoun was a mainstay of the Tunisian scene from the 1930s through independence. Zohra El Fassia could and should be considered the grande dame of Moroccan song. Fluent in styles as diverse as ‘aita and malhoun, El Fassia was a favorite of Sultan Mohammed V. In recent years, her music has enjoyed a considerable comeback. Elmaghribi first developed his musical chops in the synagogue but quickly burst onto the Moroccan music hall scene in the 1940s. This rarity, which was released on his own Samyphone label, represents a not unsubtle nod to his love for the Moroccan homeland. This is the track to get your hafla started. Salim Halali has been described as possessing the “greatest Arab male voice” of the post-war era. But the same might be said of him for an earlier period. In Taali, his 1930s hit, Halali showcases his unparalleled talent for seamlessly blending Latin rhythms with Arabic lyrics. Diva has never looked or sounded so good. In this song, written by Jewish artist Lili Boniche and featuring Maurice El Medioni on piano, Line Monty reminds us in a combination of French and Arabic that no matter how far you travel, there is “no place like Algeria.” Born Israel Rosio in 1897, Cheikh El Afrite dominated the Tunisian record industry from the 1920s through his untimely death in 1939 and is apparently still the subject of conversation as far afield as Algiers. Take a listen to his otherworldly voice and you’ll get a sense of why he earned his nickname, “the Devil.” Born Elie Moyal in Oran at the end of the nineteenth century, Lili Labassi was already attracting media attention by the 1920s. Virtuoso of violin and master of what might be considered the immediate precursor to chaabi, Labassi’s sound continues to resonate. In addition to Maurice El Medioni, Haim Botbol is the only other artist on this list who is still alive and who still performs. Some claim he introduced the electric guitar to Moroccan chaabi but I credit him with helping me to fall in love with this music. Not just your typical Algerian Albino Jewish ambianceur. Albert Rouimi was equal parts Lili Labassi and Charles Trenet – and incredibly popular at doing both. Here he is covering Lili Labassi’s ode to the city of Oran. This might be the rarest of the rare. Up until about 1930, Algeria’s Andalusian orchestras were almost entirely Jewish and its most popular was El Moutribia. Here, under the direction of Joseph Kespi, El Moutribia performs an Andalusi staple. This was likely recorded across the street from Square Bresson at the National Theater.