Elusive, evasive but delivering with unerring authority, Craven Faults arrived on Lowfold Works last month with a soaring two-track EP of airborne krautrock. Undoubtedly indebted to ’70s Düsseldorf and the San Francisco Tape Music Centre, but assembled from within a nest of patch cables in an old Yorkshire textile mill, Netherfield Works expands like water overflowing from a reservoir across two fifteen minute tracks, the man-made structures from whence it came no longer able to contain its tidal force.

To get a better sense of the process behind crafting such sentient, propulsive music, we asked Craven Faults to break down the modular mathematics behind the EP’s surging opener ‘Eller Ghyll’, giving an unprecedented insight into the nature of modular synthesis for the curious and capable alike.

The modular synth is MU format (Moog Unit) and is a combination of modules from eleven different manufacturers but based around Oakley Sound Systems (built by Krisp1 in South Yorkshire), Synthesizers Dotcom from Texas and STG Soundlabs in Illinois, plus other modules from Spain, Ukraine, Russia and Germany.

The Netherfield Works EP predominantly uses the modular but there’s also Sequential Circuits Drumtraks, Elka Sidekick 32 and MPC DSM drum machines, and on the track Tenter Ground there is an EDP Wasp synth, bass guitar, piano, EMS Synthi (not mine!) and a couple of friends playing drums and saxophone. 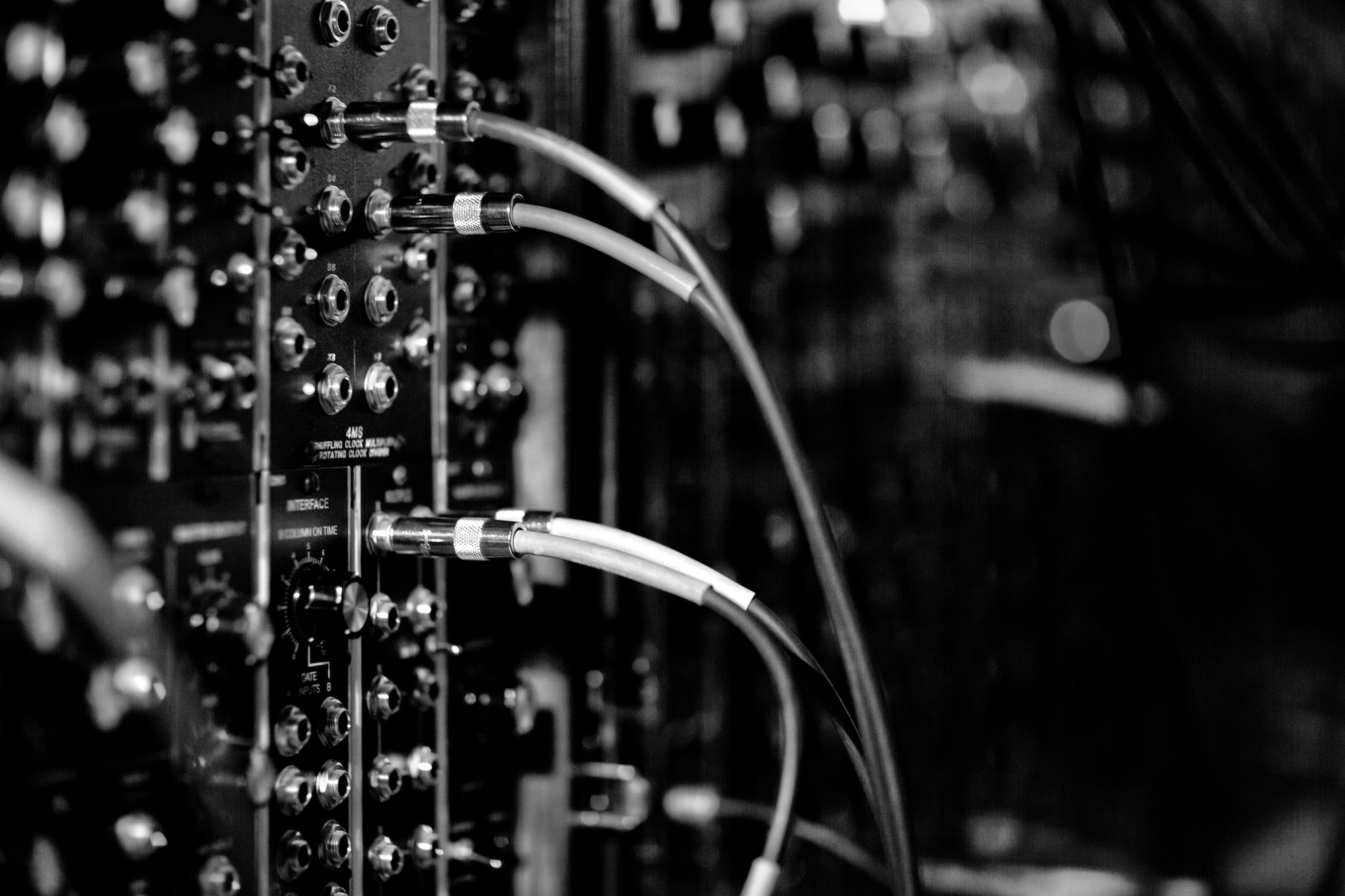 When I decided to get into modular around 2010 I was open to any format, I went down the MU route because I found a small system second hand online. It now takes up 3 cabinets and is 99U in size (enough for 99 single width modules). There are 4 different sequencer systems plus various electronic switches, gate dividers/multipliers, Boolian logic gate, sample & hold, midi clock and midi time code interfaces, 5 VCOs, 3 basic LFOs and 2 complex LFOs, frequency multiplier/divider, 4 mixers, 5 envelope generators, envelope follower/lag/slew/pre-amp/gate extractor and a multi-function slope generator, 8 filters, phaser, ring modulator, fixed filter bank, sawtooth animator, Vactrol lopass gate, spring reverb, 4 waveshapers, 2 attenuators/inverters, noise generator and 7 VCAs, plus various utility modules. I don’t see this synth as a keyboard instrument, there isn’t one connected.

The Euro modular synth market has far more choice for modules and there are a lot of interesting sound creating and sound shaping modules out there. Euro is really intuitive to use and it’s a lot easier to get great results, but for myself I like the idea of starting with nothing and having to try and be as creative as possible by using basic waveforms and the simple actions of control voltages that rise and fall. I like the limits imposed by basic synthesis. Some day I may add other modular formats to my system, everything is compatible, but I don’t feel I’ve exhausted the possibilities of what I currently have. 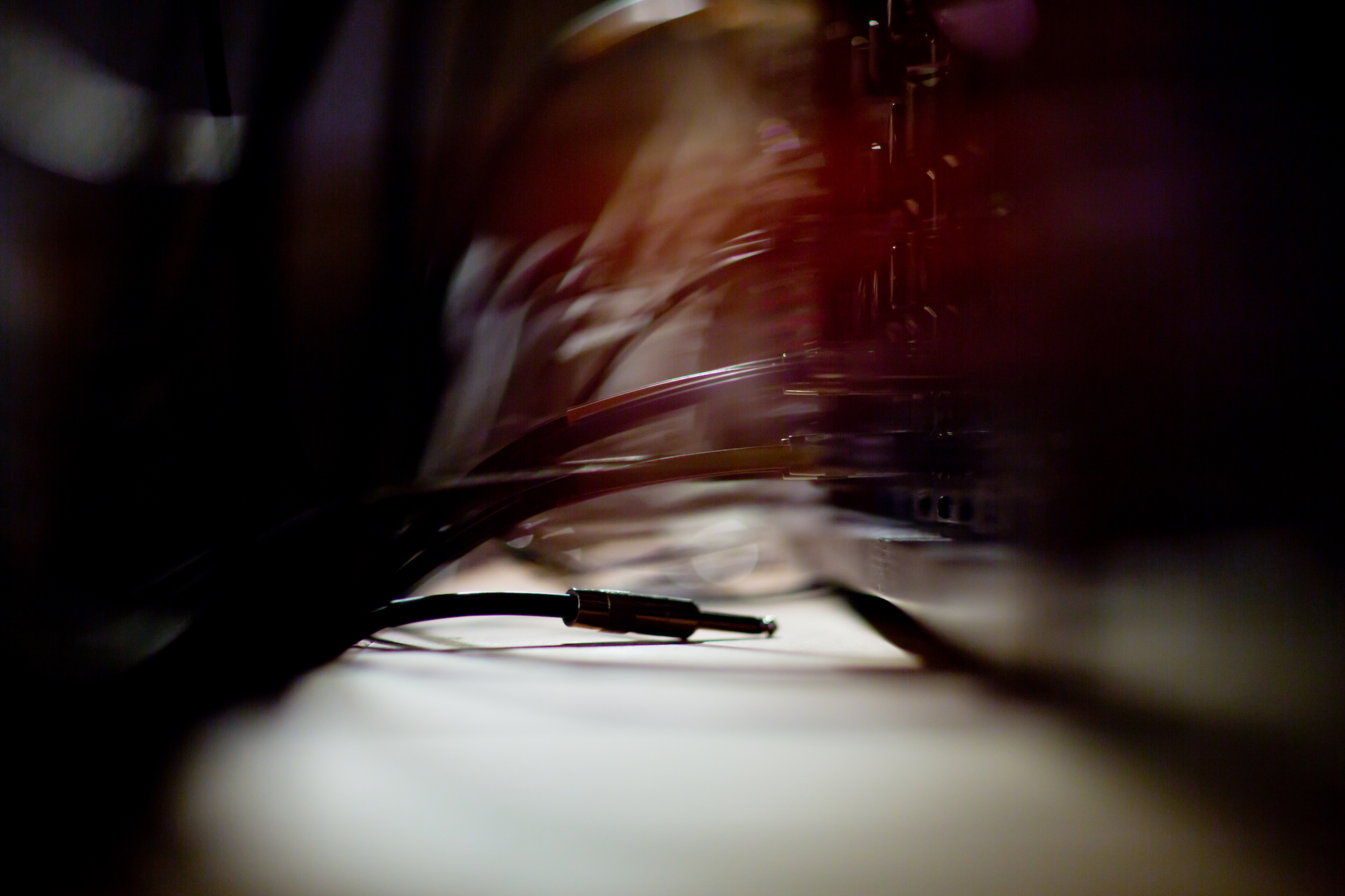 ‘Eller Ghyll’ came about through a process that has become familiar for most of the Craven Faults tracks. Essentially, I have a vague idea of what to start with – this could be a rhythmical idea, an abstract feel, a sound, anything that comes to mind – and almost immediately go off down a different path, build up layers of sound, add more and more ideas and finally, remove everything that seems surplus to the needs of the track to get back to the initial idea I started with.

‘Eller Ghyll’ began as an idea to create a bed of interlocking, looped sequencers moving quickly but changing gradually over a long duration. This was to be underpinned by a series of intermittent bass and drum sounds coming in at irregular intervals, not actually adding to the rhythm but adding dynamics at certain points, in groups, with 3 or 4 minutes between each group. This idea was a theoretical starting point. 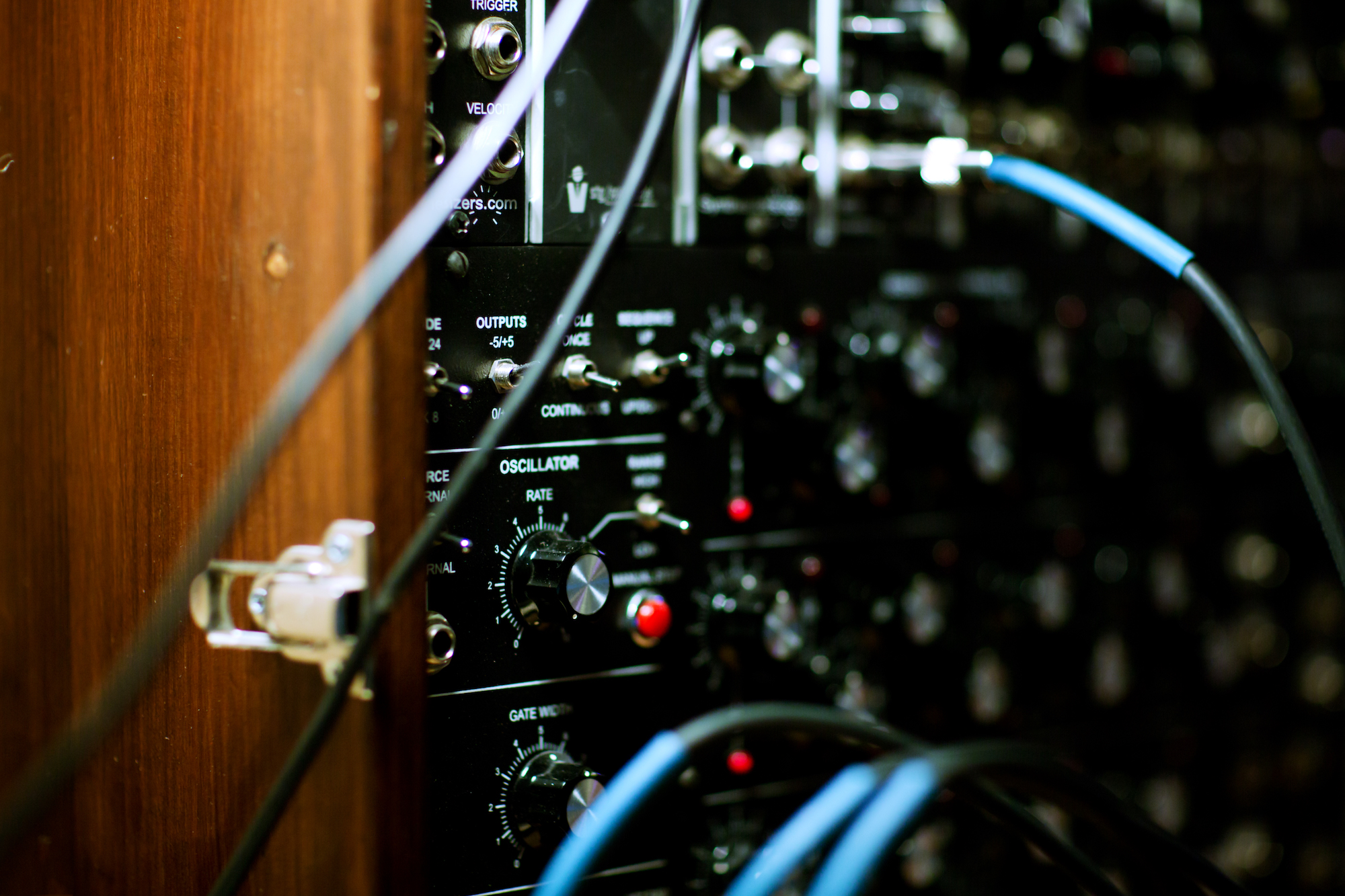 1. The modular is locked to Pro-Tools with midi clock and the first task is to decide on a tempo, almost arbitrarily.

2. I wanted two sequence lines to run simultaneously, in stereo, so I made a patch of sequencers to VCOs, pulse waves out into filters and VCA’s, envelope generators into control of VCAs – a pretty standard patch. The sequencers were tuned to 3 or 4 notes, I usually just use whatever they happen to be tuned to as a starting point and adjust as I go along.

Each sequencer was programmed to work in a sequence of 3 to 6 stages. I varied the number of stages on the fly as the tracks were being recorded. This changed the juxtaposition of the notes played. The final take of pulse wave sequences was processed through a Revox B77 tape machine, creating delays. The tape machine creates echo by using feedback, sending the output back to the input on an analogue mixing console. EQ is cut on the desk channels so that the sound changes as the feedback progresses. This creates a kind of rhythmical texture to the sound rather than a simple echo delay. Spring reverbs have also been added to the sequencers to bring out some of the individual notes.

3. To add to the rhythmical backing I created some loops of piano phrases which were lifted from the recordings for ‘Tenter Ground’ as the key appeared to be similar. These remained in the track until quite late on when they were removed. I also added a second set of sequencer lines which were intended to add to the rhythmical pattern but with a different sound, more like a string synth. This idea was also abandoned.

4. The track needed another tuned rhythmic idea to sit at the higher end of the frequency spectrum. This was made with ring modulated sounds, again processed through the Revox, and also through a spring reverb. 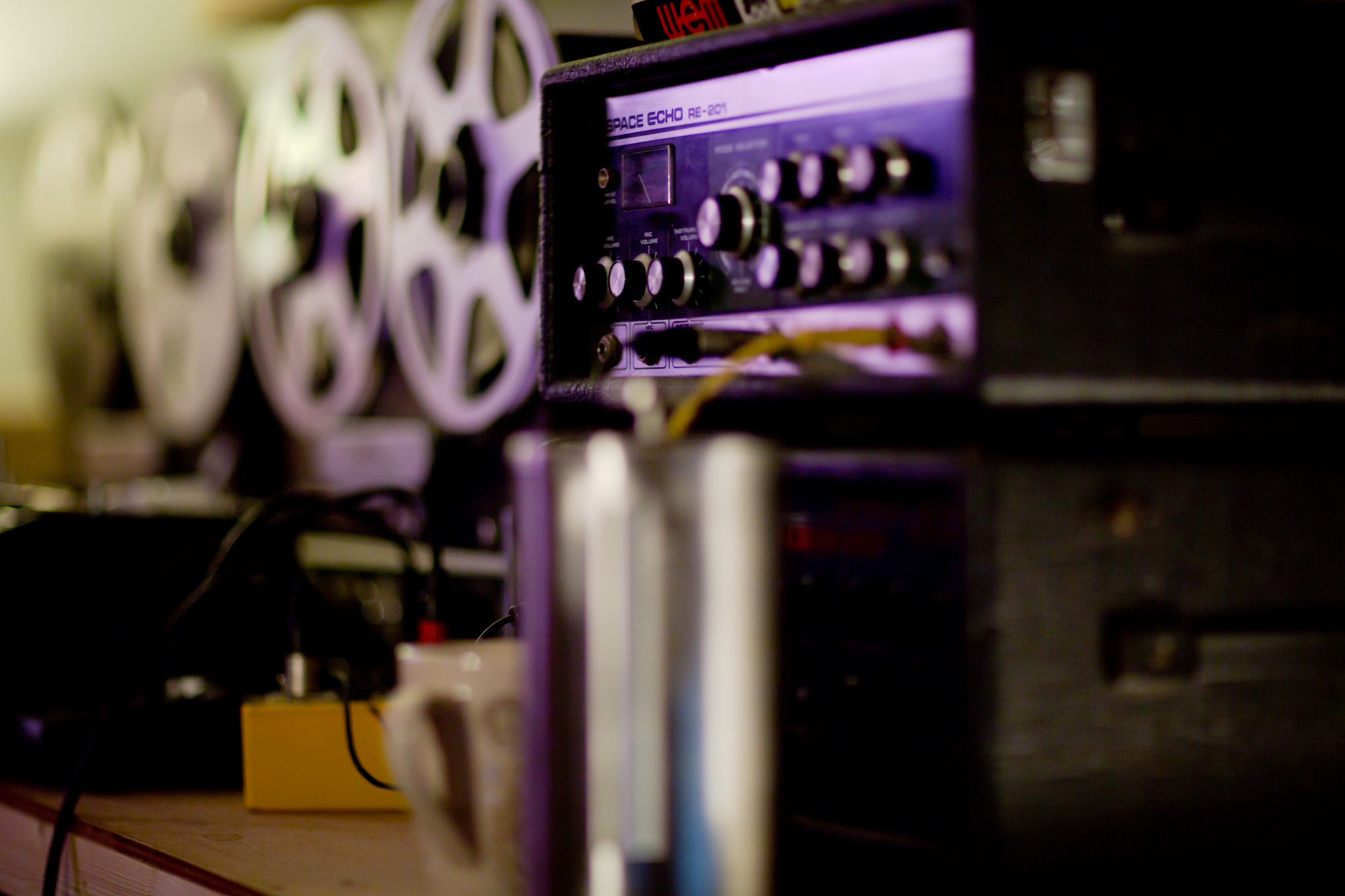 5. I created bass and drum sounds using the modular for the bass, and recordings of a drum kit I had made previously for a band I had been recording – individual drum hits in a large space. I also tried sounds from the Sequential Circuits drum machine. This morphed into a more melodic drums and bass section, almost like a rock band had started playing along. All these ideas were removed early in the process as the track was beginning to suggest a different direction.

6. The new rhythm/drum ideas involved use of various drum machine sounds, overlaid kick drum sounds for different attack and sustain sounds. The Sidekick 32 drums have been processed in the Akai S950 sampler to create wood block-type sounds. The Sidekick 32 is a 1970s drum machine with pre-set rhythms so the individual sounds have to be edited out. The hi-hat type sounds are filtered white noise, processed with an Eventide Harmonizer. The arrangements were done in Pro-Tools.

7. The first new bass ideas were to try something repetitive/melodic using bass guitar. These recordings were then remade with the modular replacing the guitar. This idea was abandoned to be replaced with the final bass idea of using just 2, then 3 notes at a quarter of the sequencer tempos. The bass is stereo, the lowest octave centred, higher octaves panned left and right, and also slowly modulated with LFOs. I decided to introduce the bass at the half way stage, around 8 minutes into the track, as I liked the way it appeared to ‘ground’ the track. I had the impression of the track almost hanging in the air for the first 8 minutes without the bass, almost like it was floating.

8. The original intro to the track was a simple motif using a fixed filter bank and dual filter giving a kind of vocal formant type sound. This was dropped at the last minute to be replaced by a location recording of a stream processed through the modular, a tremolo in time with the track. This location recording was played through the modular initially to try and drive the envelope follower and use the subsequent voltage to control filters. I had wanted to mimic elements of the flow of water with sound shaping techniques. This, of course, did not work. There was, however, a setting for tremolo still patched from a previous recording and this seemed to give an outcome I hadn’t known I’d wanted, a natural sound retaining much of its original character, but with a new element which placed it somewhere new and unexpected.

9. The outro/coda was originally made to be part of the main body of the track but worked better as separate end section. A sequence of 2 saw waves through a phaser into the lowpass gate, tremolo and a pair of spring reverbs. 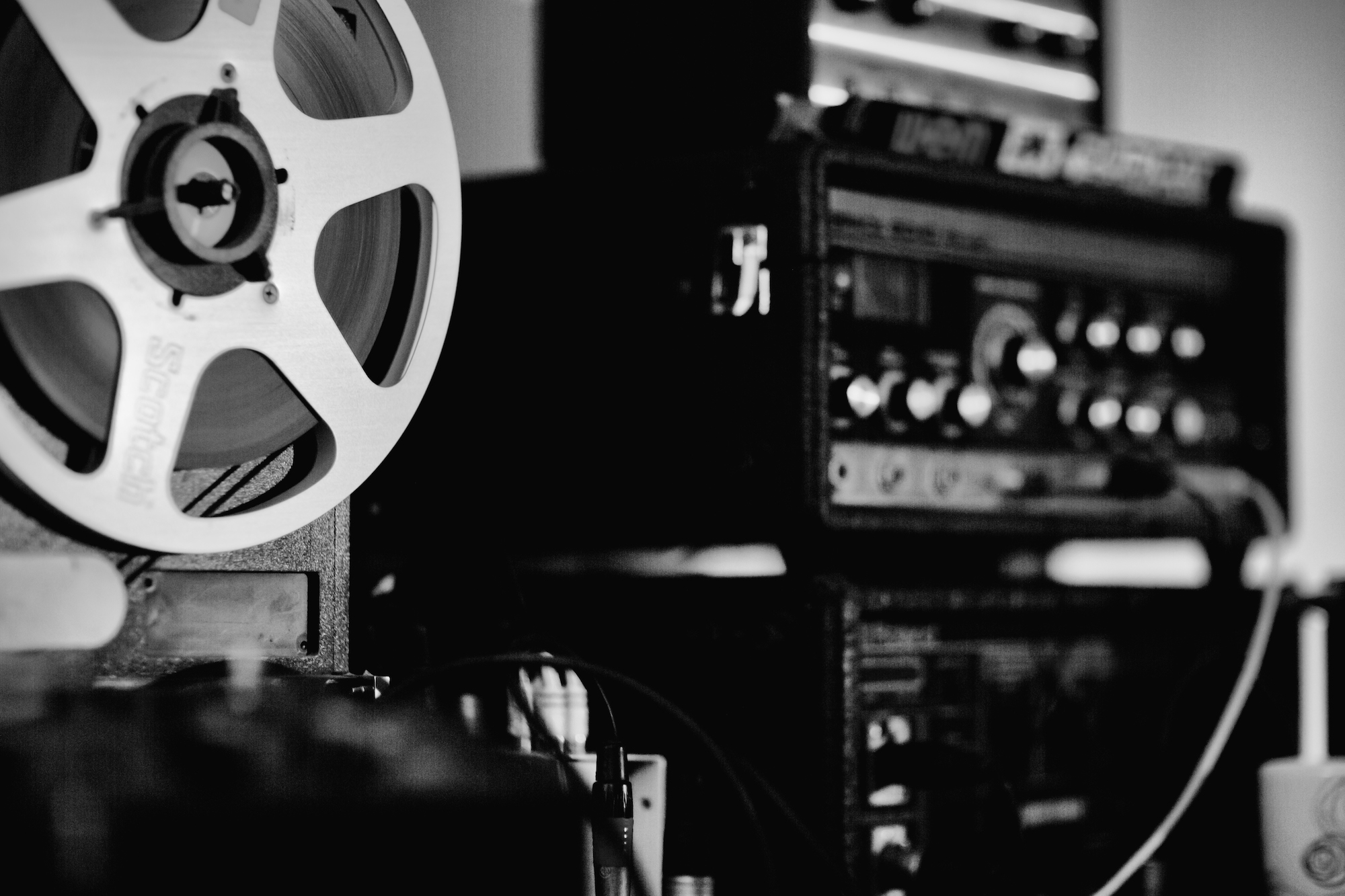 Some of these processes described here have been worked and altered many times. The above is a rough order of simplified events, but this is a process of continually going back to the start, going in circles, constantly looking again at the individual parts, not being afraid to throw away favourite sections or ‘clever’ ideas because the track is better without them.

I use a lot of slowly shifting automation throughout. Sounds fade in and out almost imperceptibly, not just the main elements but also spring reverbs, which can have the effect of changing the tonal elements and adding resonances more than simply giving the sound a space.

The most difficult part of this methodology is knowing when to stop, where to draw the line. I like to keep certain elements of the music relatively simple (using as few notes as possible, no key changes), whilst other elements become quite complex (overlaid time signatures and counter-rhythms).