The DJ, producer and Discwoman founder started collecting records through a love for Detroit’s techno heavyweights and a broken laptop. James Hartley traces her musical journey from Kansas warehouse raves to helping drive the global conversation around diversity and representation in dance music.

There are no conventional routes into music. Moving from Brian Eno cassettes to breakneck ’90s techno via the Spice Girls on a journey that still feels nascent, Emma Olson aka Umfang is a testament to that (‘umfang’ translates simultaneously as ‘scope’, ‘capacity’ and ‘volume’ in German).

As a DJ, her trajectory from playing ‘bro-bars’ to Berghain was rapid. As a producer, she’s moved from cassette-only releases on 1080p and Videogammusic to full-length album Symbolic Use of Light on Ninja Tune sub-label Technicolour last summer.

As well as pursuing her own path, Umfang has made arguably her biggest impact as co-founder of collective and booking agency Discwoman, which champions female and non-binary artists in dance music. Four years on, and Umfang’s glad to see the initiative of the NYC collective reflected in a growing global community.

Appearing at Dimensions Festival later this summer, we caught up with Umfang at home to find out how she got here. 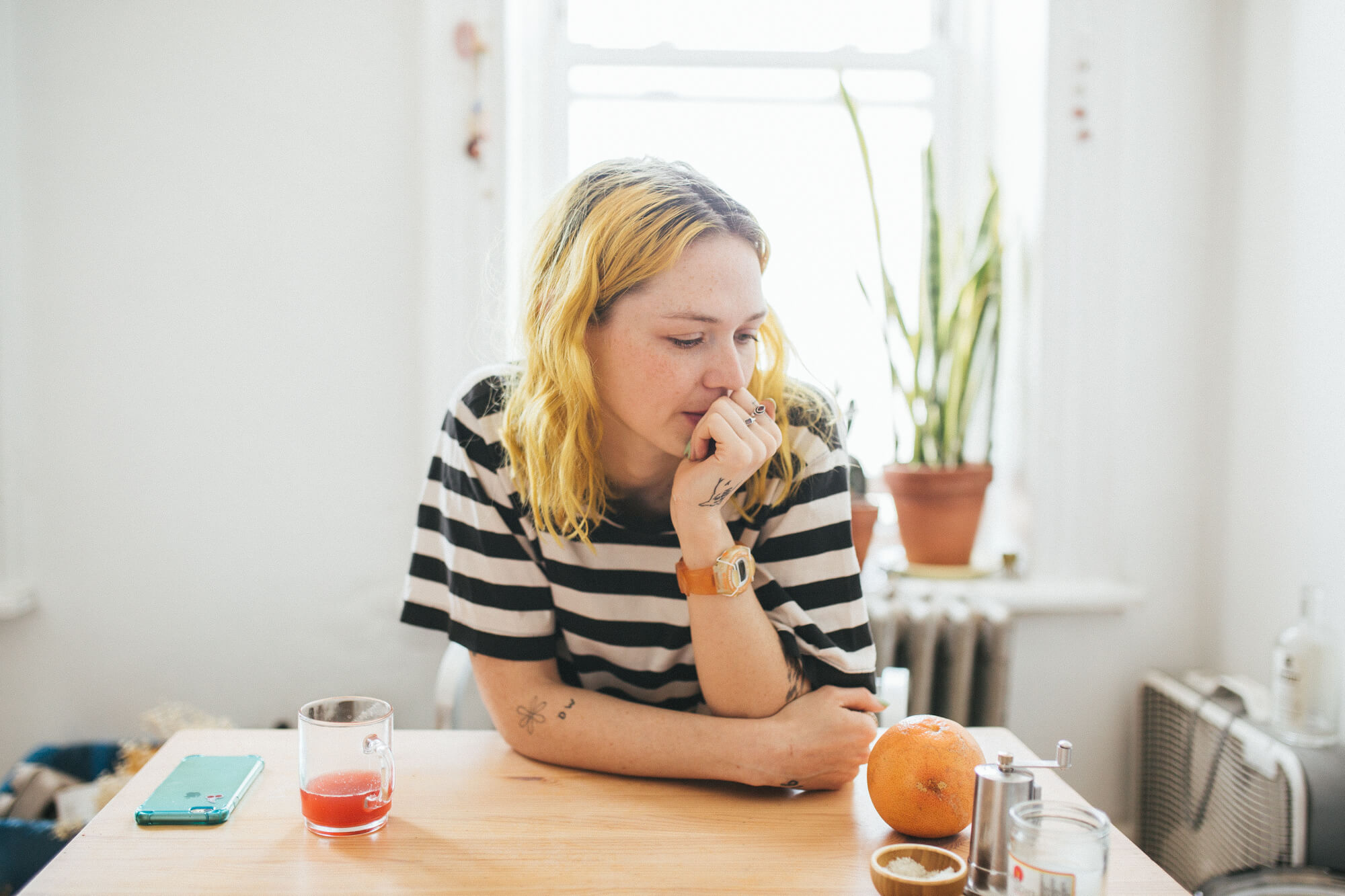 Let’s start at the beginning, did you have a musical upbringing? Any musical influences?

My dad studied composition for a while when he was younger. He was into instrumental and classical music, and both my parents liked Philip Glass and Brian Eno. Somewhere in between mainstream and something else. I was around that, but it wasn’t forced on me, it was just there. I could connect to it in an emotional way that I didn’t quite understand as a kid. But it also made me grow up unaware of mainstream American music. I didn’t know about Bruce Springsteen until I was in college… 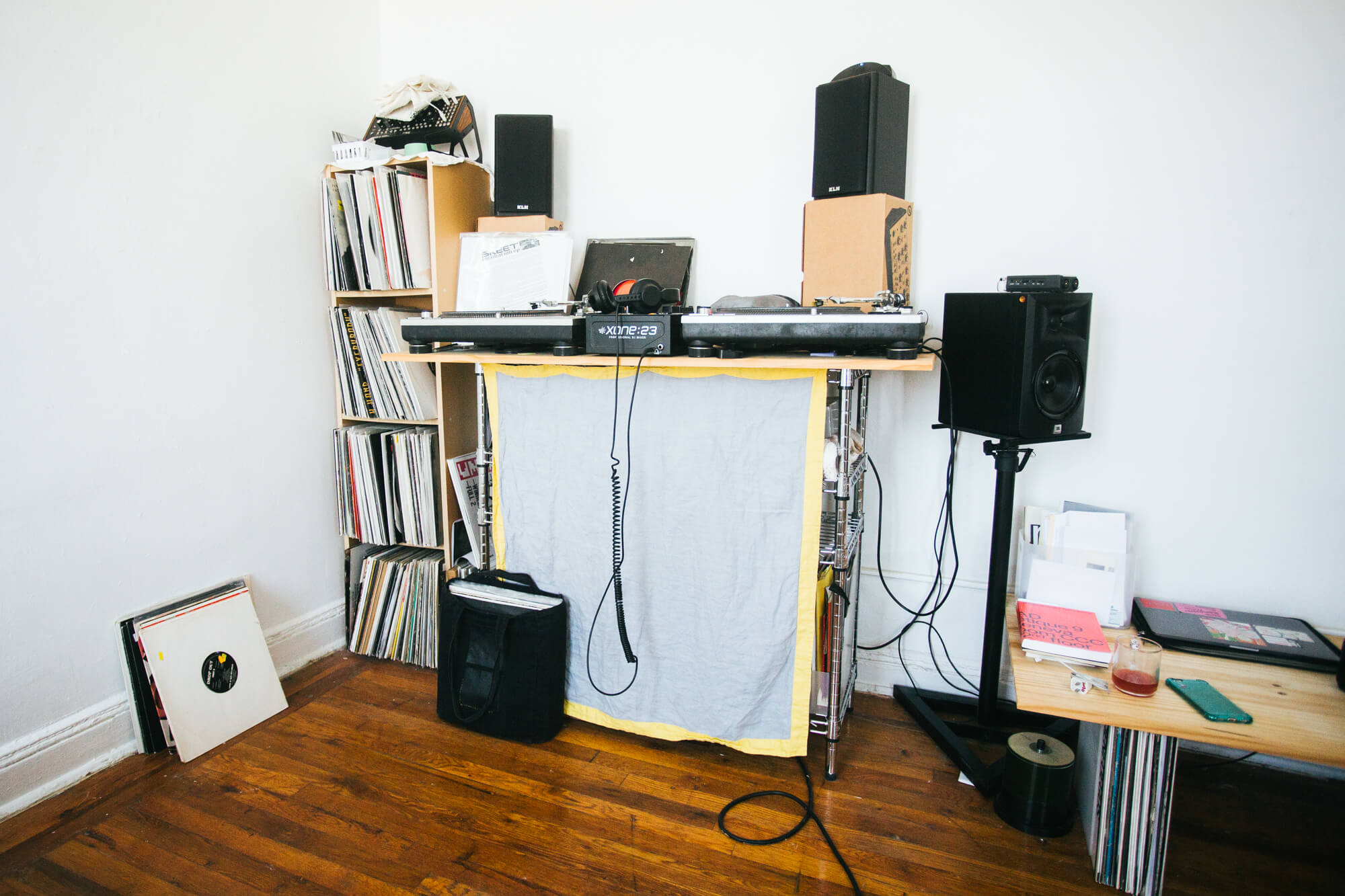 So you weren’t necessarily even aware of how eclectic your start in music was? Do you remember your first record, or conscious moment of wanting music?

When I was a child I was really into this Brian Eno tape, and I remember saying: “I want the tape where the man is singing!” Beyond that some ’90s soundtracks I got on CD were probably the first things I became attached to. And the Spice Girls… 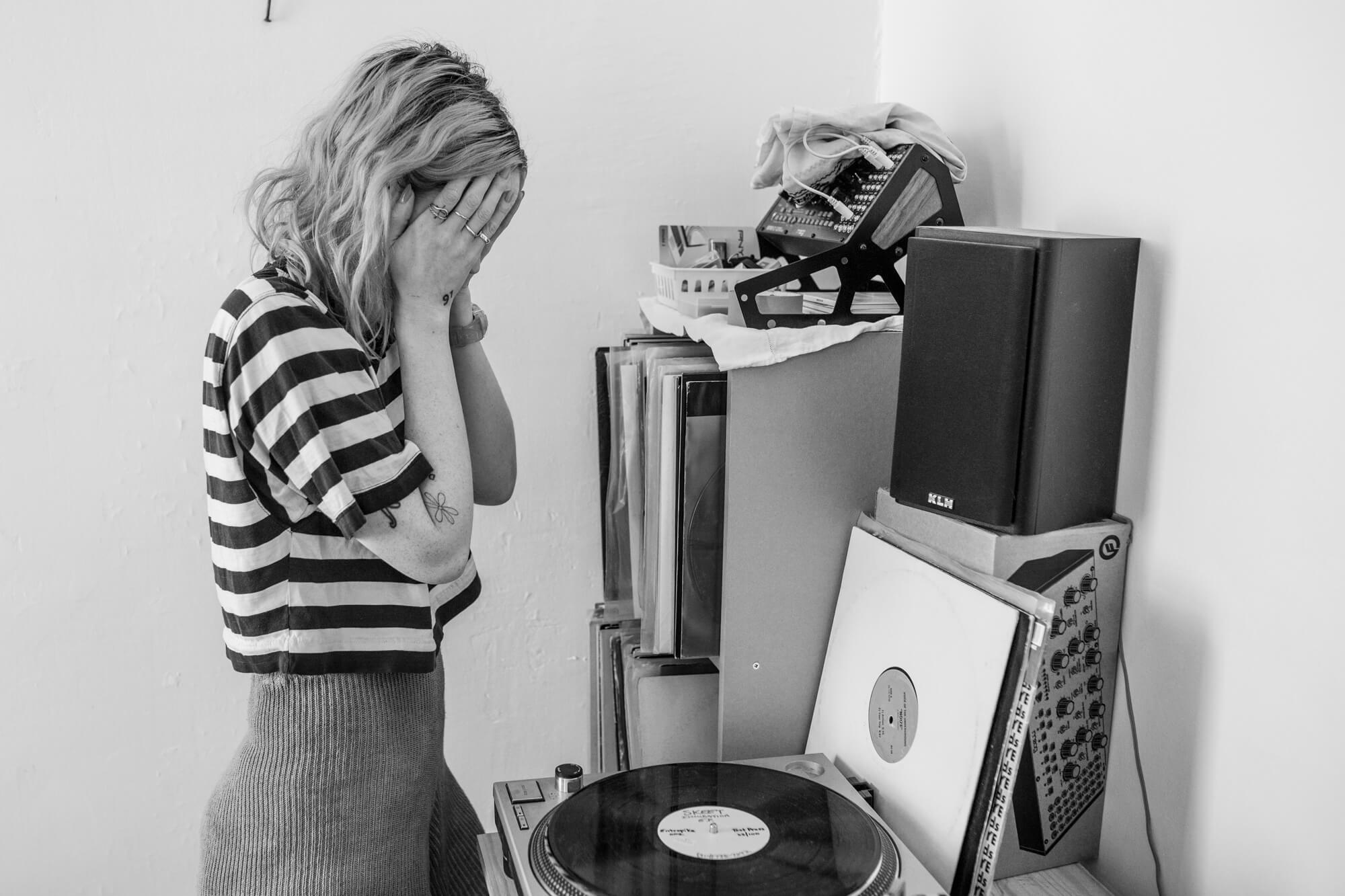 OK good. I was going to say, if your only childhood influences were Glass and Eno, then your childhood was way cooler than mine!

Haha, no, I was into the Spice Girls and all that random stuff like Madonna. It was just scattered. I remember being very present for the hip-hop and rnb moment that happened in the ’90s that was all over the radio. Aaliyah, Timbaland – stuff I really enjoyed, but never really consumed. I loved that I could hear so much on the radio, but was never into buying the albums. 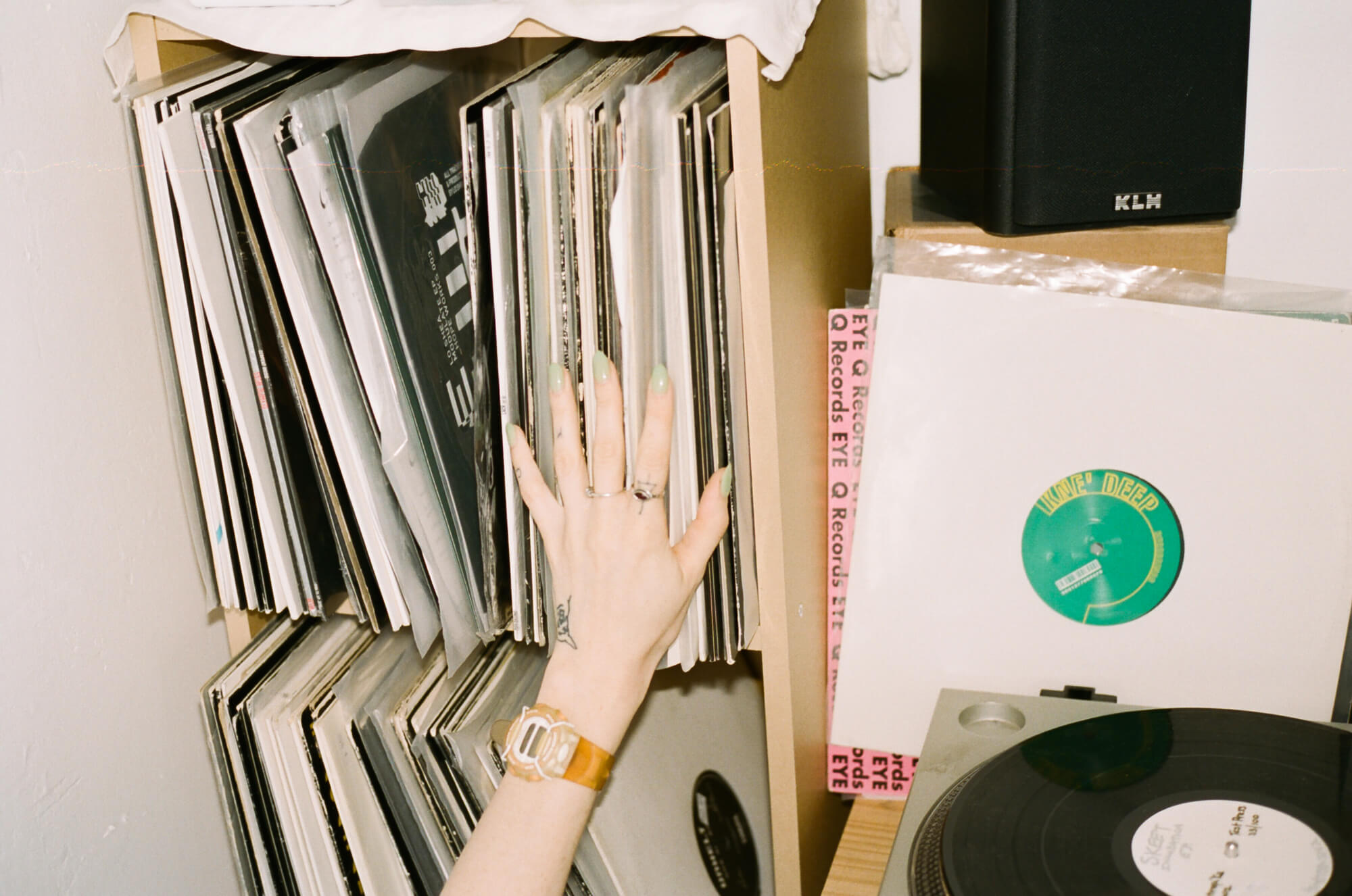 How did you discover electronic music, or more specifically techno?

When I got to college I made friends with people who were DJing on computers, and they introduced me to the culture of it. I was also part of a message board that shared tracks and that’s when I started collecting techno. I had a friend who encouraged me to learn how to DJ on Virtual DJ, and that started the whole thing. 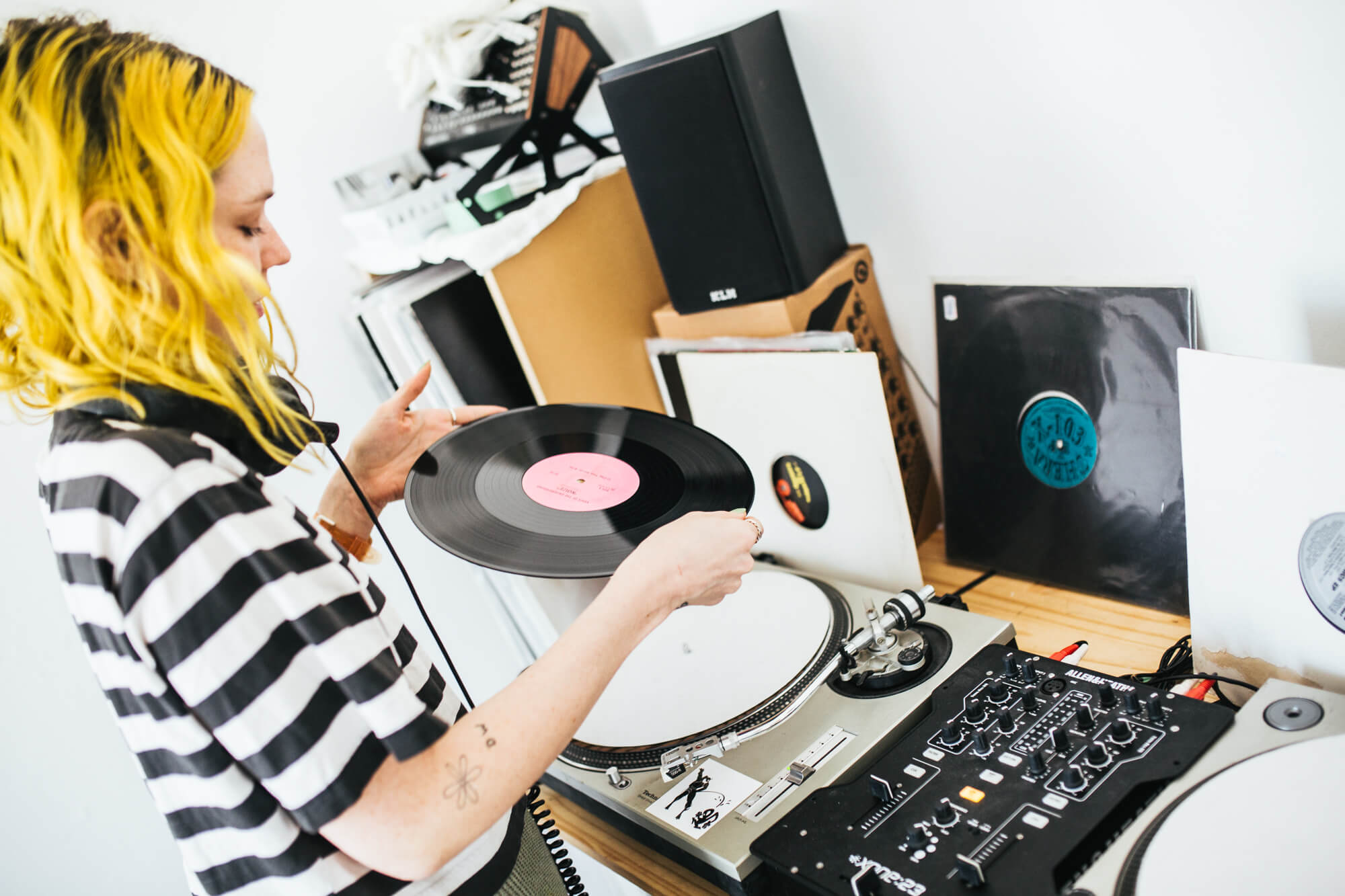 When was your first DJ set?

In 2009. In a warehouse in Kansas City, called the Emerald Space. Botnet was the name of the rave.

When did you end up moving to New York?

I actually lived in New York as a kid, so it was always on my radar. But I moved back in 2010. I moved in with someone who had turntables, and the place was right by a record store called Heaven Street – it’s the first place I ever bought records.

In 2011, my computer got stolen, so that really changed things. I realised that my idols, these Detroit techno icons, were all vinyl DJs. It felt important for me to understand how that worked. And so I started collecting cheap records around NYC – $2-3 hip-hop or house records.

Who are these idols you speak of?

Omar S, Jeff Mills, DJ Stingray, K Hand. Those were the big ones that affected me. The more I learned, the more I adored it. 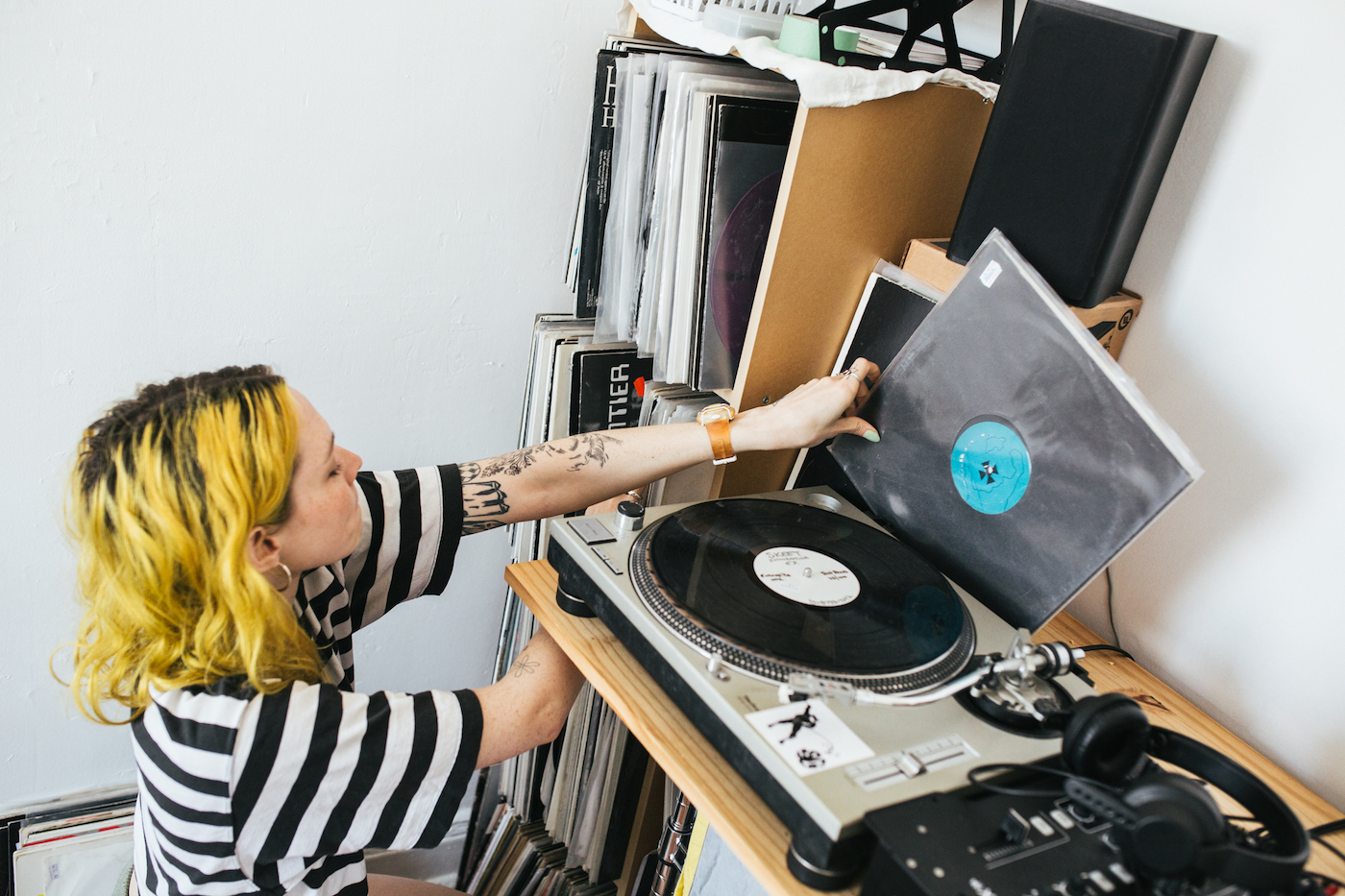 This [above] is a sick Jeff Mills record. It really freaks people out because it goes away and comes back in such a scary way. It’s a good 9am record when everyone’s out of their mind. Jeff Mills = Hero.

Yeah, it took me a while to bounce back from that one.

Were you playing out at this point?

Yeah, I was playing really bad gigs at bro-bars. Just learning how to mix. I had one functioning residency at this drag party called Klump. It was pretty popular in its time. I was the resident DJ there, but I don’t think anybody liked me. It was at Trophy Bar. That’s where I learned to use CDJs as well. So I would bring both records and digital tracks. 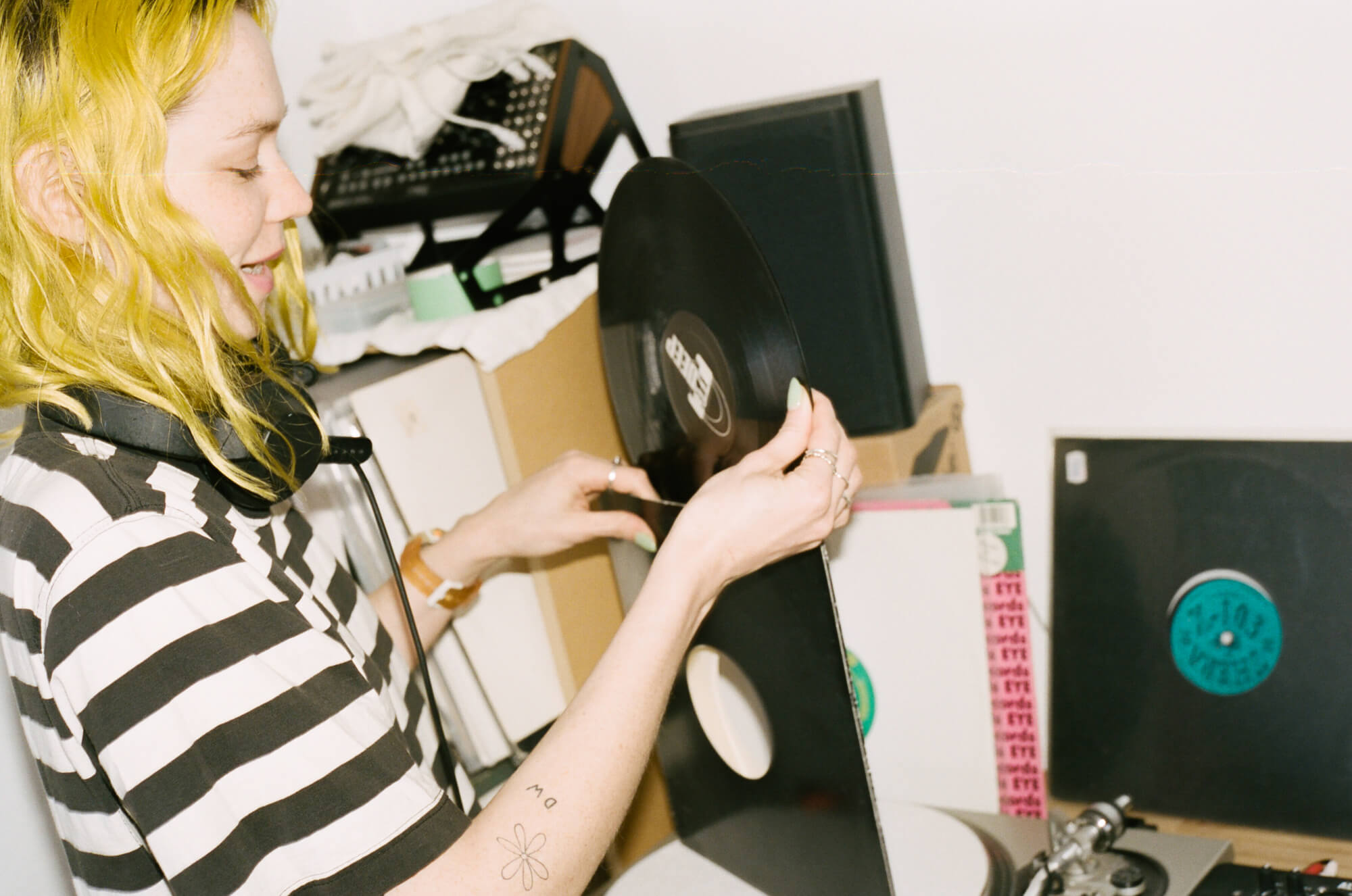 And these days, hows it split? What do you play more of?

Half and half. When I’m in NYC, I’m more likely to play all vinyl or mostly vinyl sets. My favourite gems are generally things I find on vinyl and I really do enjoy it more. But I found that travelling with records is so hard, impractical and painful. You really have to put your body at risk carrying them around all the time. That’s something I’m really struggling with, trying to figure out how to keep pulling that off in a way I’m comfortable with. I’m scheming a way I can leave records in Berlin, so the next time I play a long set there, I can play them. 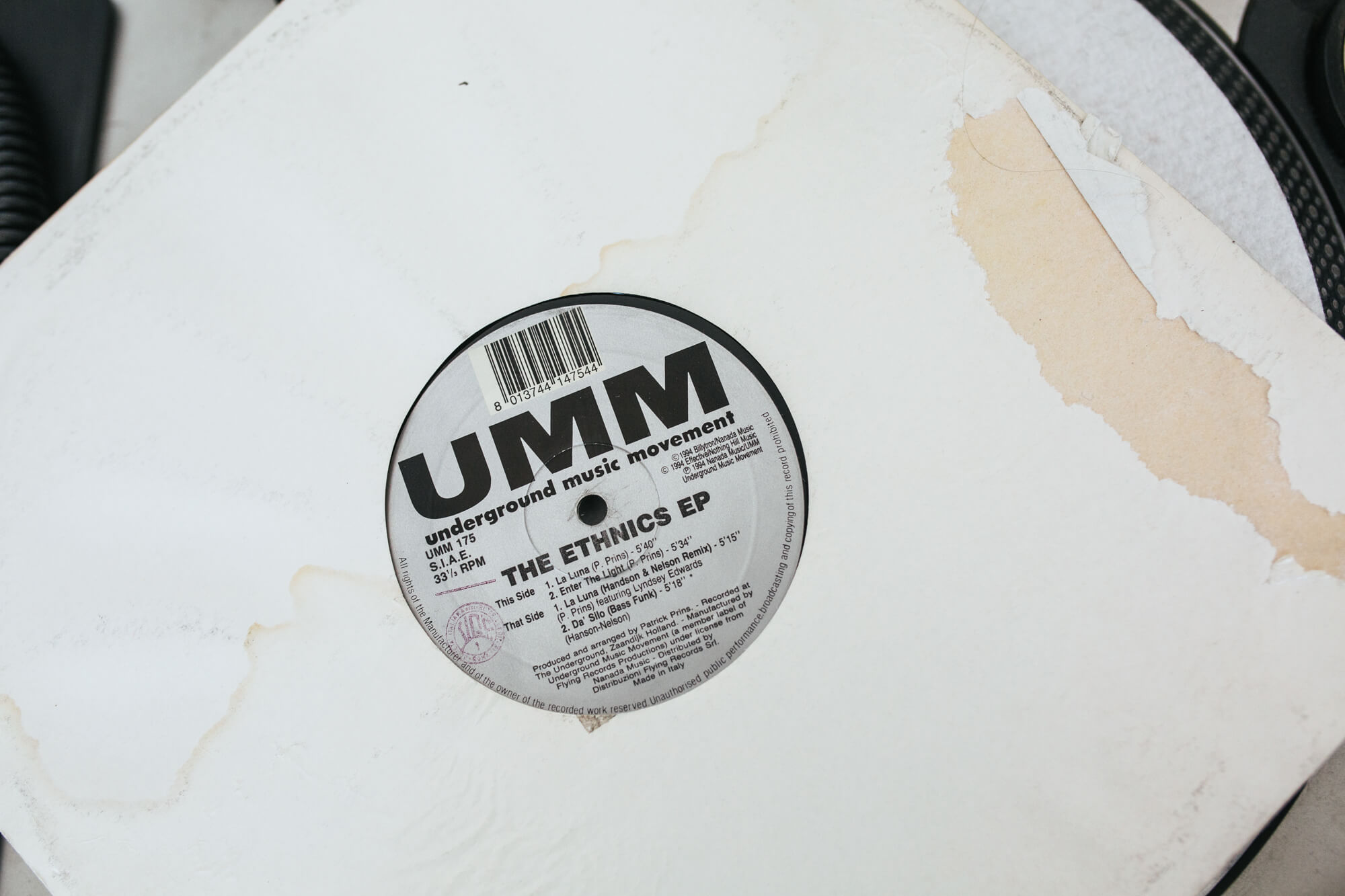 This is one [above] that I got at The Thing. It’s a shitty house record, but there’s this random track on it that’s beautiful and totally freaky, with a house vocal that comes in. I’m obsessed with this record. This is a gem to me, where it doesn’t make any sense. It’s just stunning, and how would you ever find this? Total chance.

Is there something you gravitate towards collecting?

For the past few years it’s been quite functional. I feel like my music consumption in general is pretty functional. Like I don’t even really find myself listening to music unless I’m preparing for a set, or I’m listening to something that’s completely not techno.

I’ve always liked techno more than house. I’ve always played more intense music than a lot of people. I’m not quite sure where the turning point was, but when I first started collecting records I had a few that were too fast for me to play with everything else. And eventually they just became the records I wanted to play. Suddenly, my entire collection became fast ’90s techno. 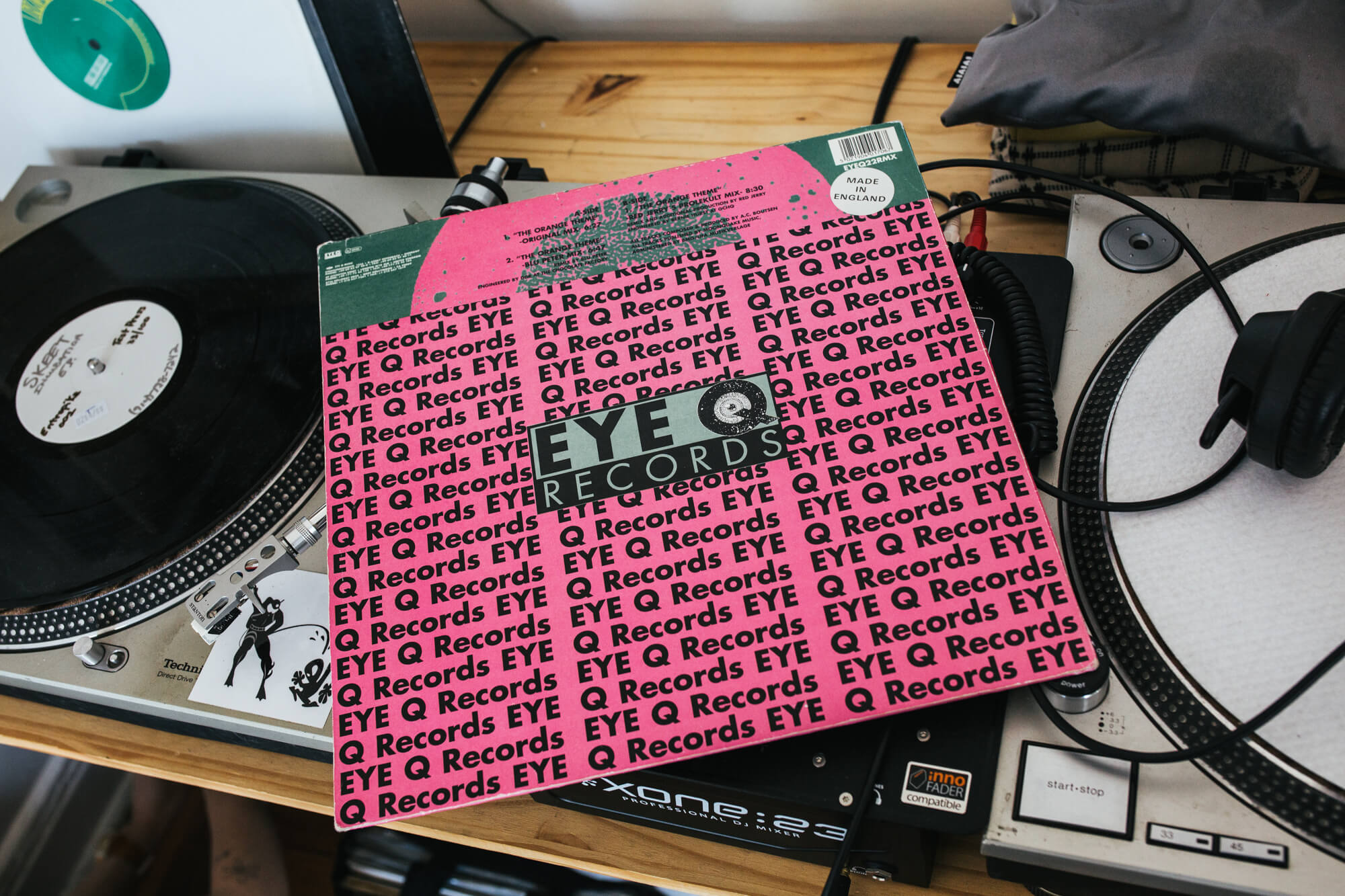 I’ve been playing this record [above] more, but I got a while ago. It’s a classic trance tune, but I can play it in techno sets, even though it’s real cheesy.

When you’re digging, are you trying to find era-specific techno, or things that work in that context?

Now I kind of know how to spot it. I feel like I shop really visually. I’ll look for name of producers or where it was made. For the most part I shop by graphic design – I see the label and I’m like “that’s probably good!” There were such intense visual and aesthetic trends per year. There are outliers that are awesome too, but the fast ’90s techno is still just my favourite. It’s getting popular now so I wonder if I’m going to have more competition. Usually they’re pretty cheap…. 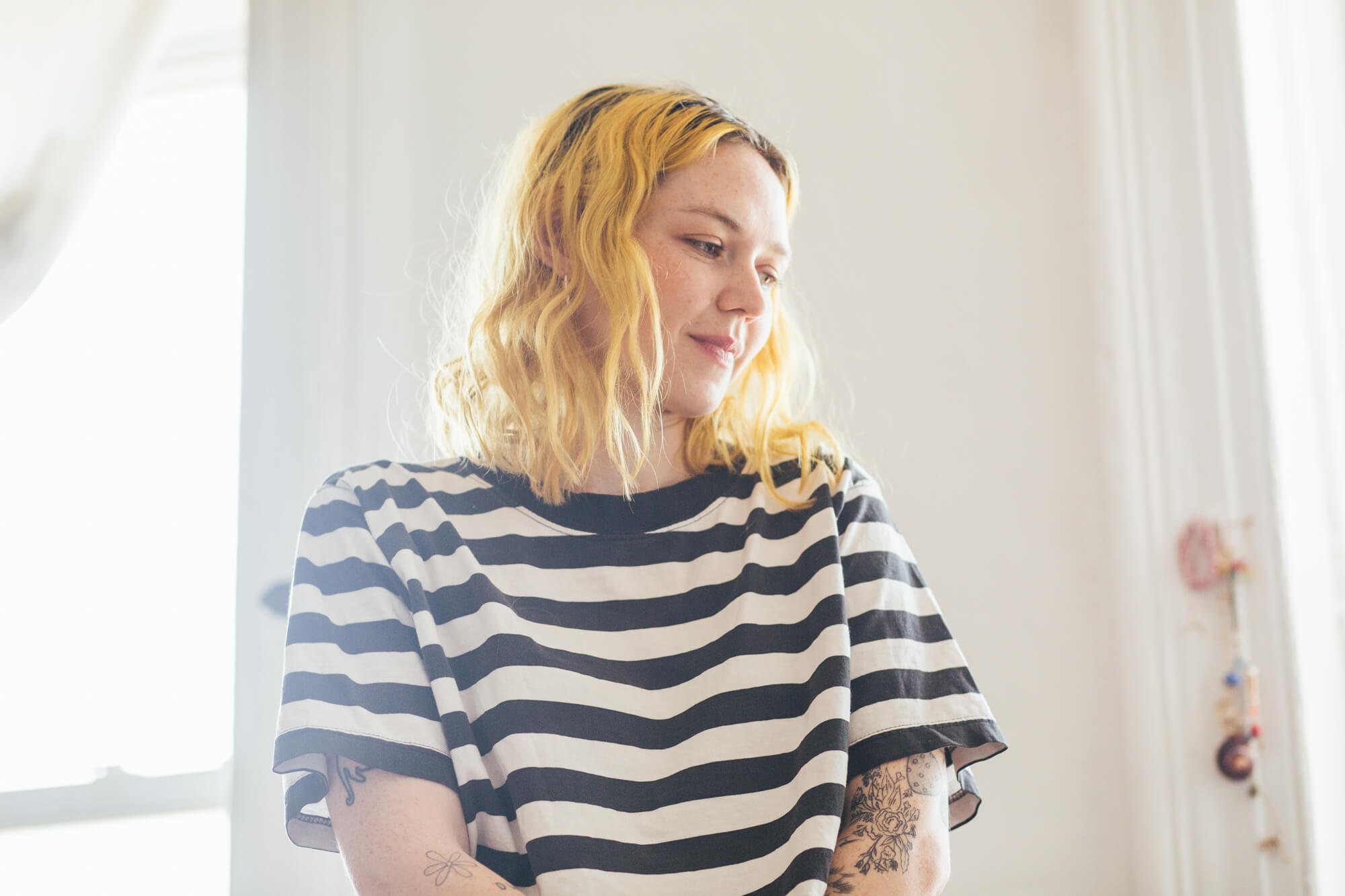 Is there anything current you’re into?

That’s a huge problem actually. There are some cool people that are making hybrids between what you’d call rave and club music; mixing those feels together. I’m really into that stuff. It integrates well with what I play.

But what’s considered techno now I really don’t like. The aesthetic trends are so over produced. There’s so much going on, so many effects – I find it really cheesy, which is funny because most would say rave is cheesy! 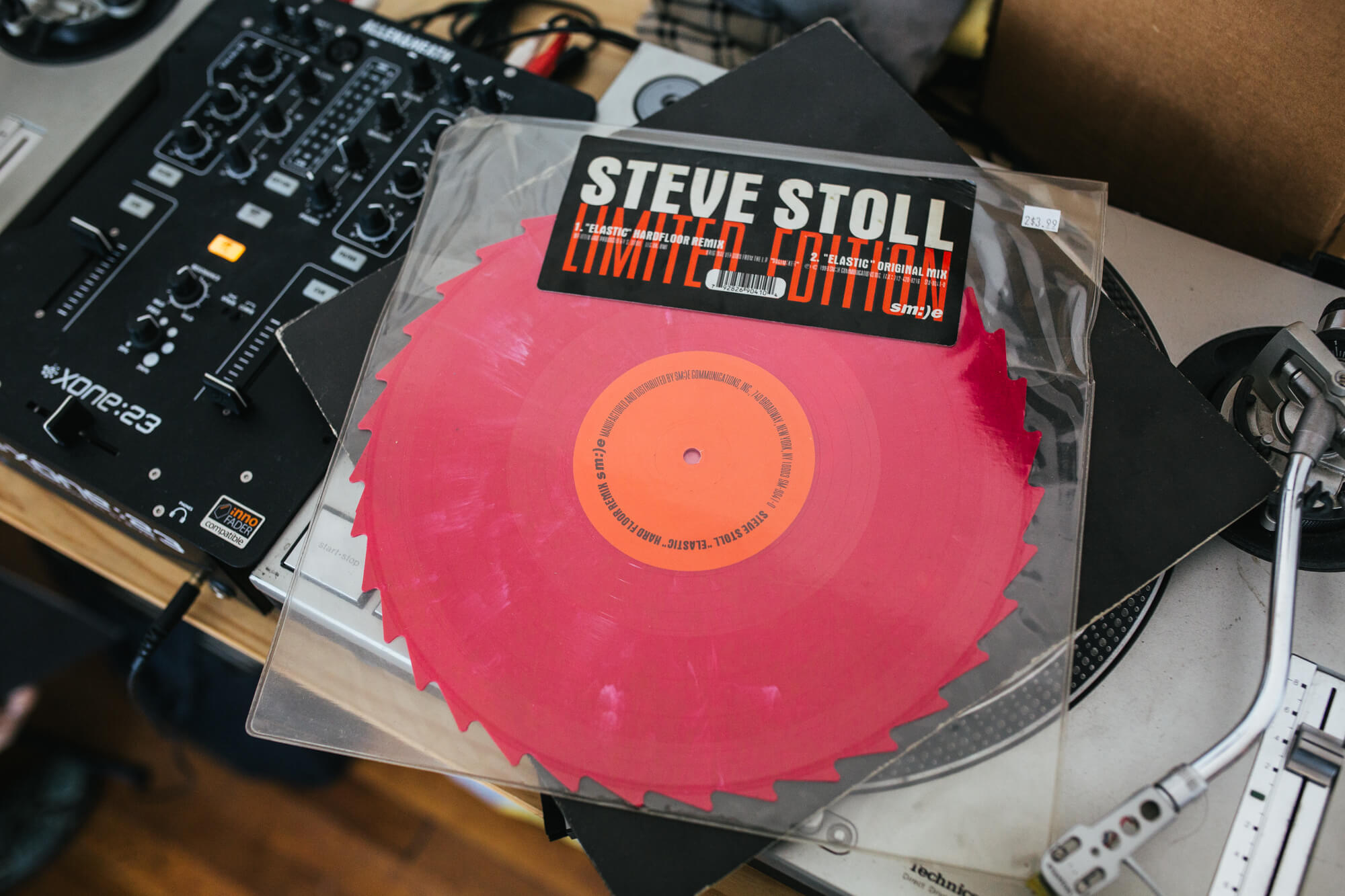 There’s this real intensity to those tracks. I think a lot about how they were made at the time. They felt so fresh and that’s where that energy came from. The music that feels fresh now isn’t techno. It makes sense to me because techno’s basically 30 years old now. I feel newer takes on electronic music are what I’m looking for now. If someone sends me their tech-house album, I just can’t… I’m just not interested. 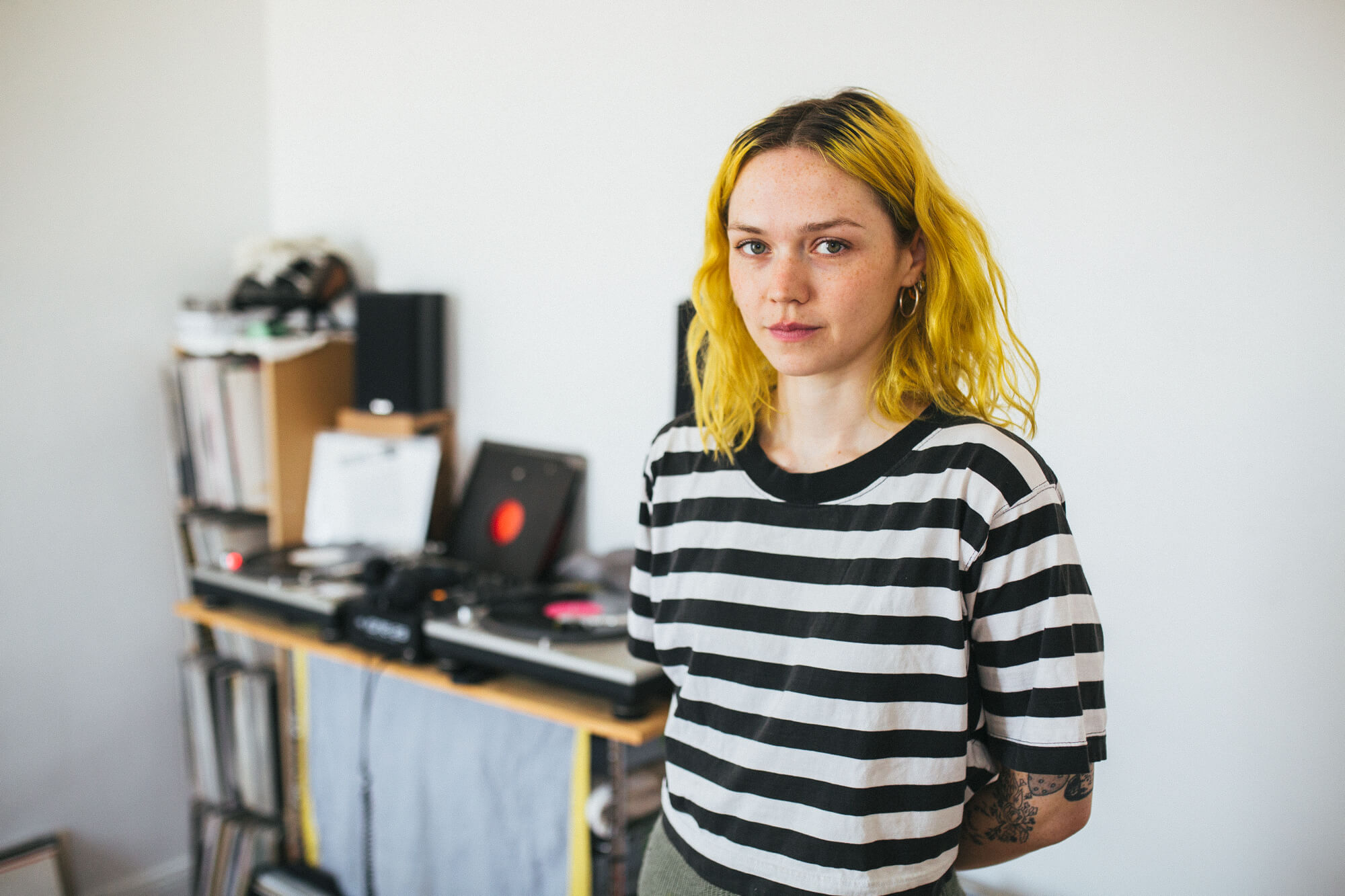 Any labels or producers that have said freshness we should check out?

Well I’m obviously a big fan of all the Discwoman DJs, haha. There’s the compilation we just did with Physical Therapy. We tried to source experimental club stuff that’s happening now. People that are interested in finding parallels between club music now and club history are really interesting to me. Random people with super-interesting takes. Also a big fan of Club Chai, this collective started by two people in Oakland. 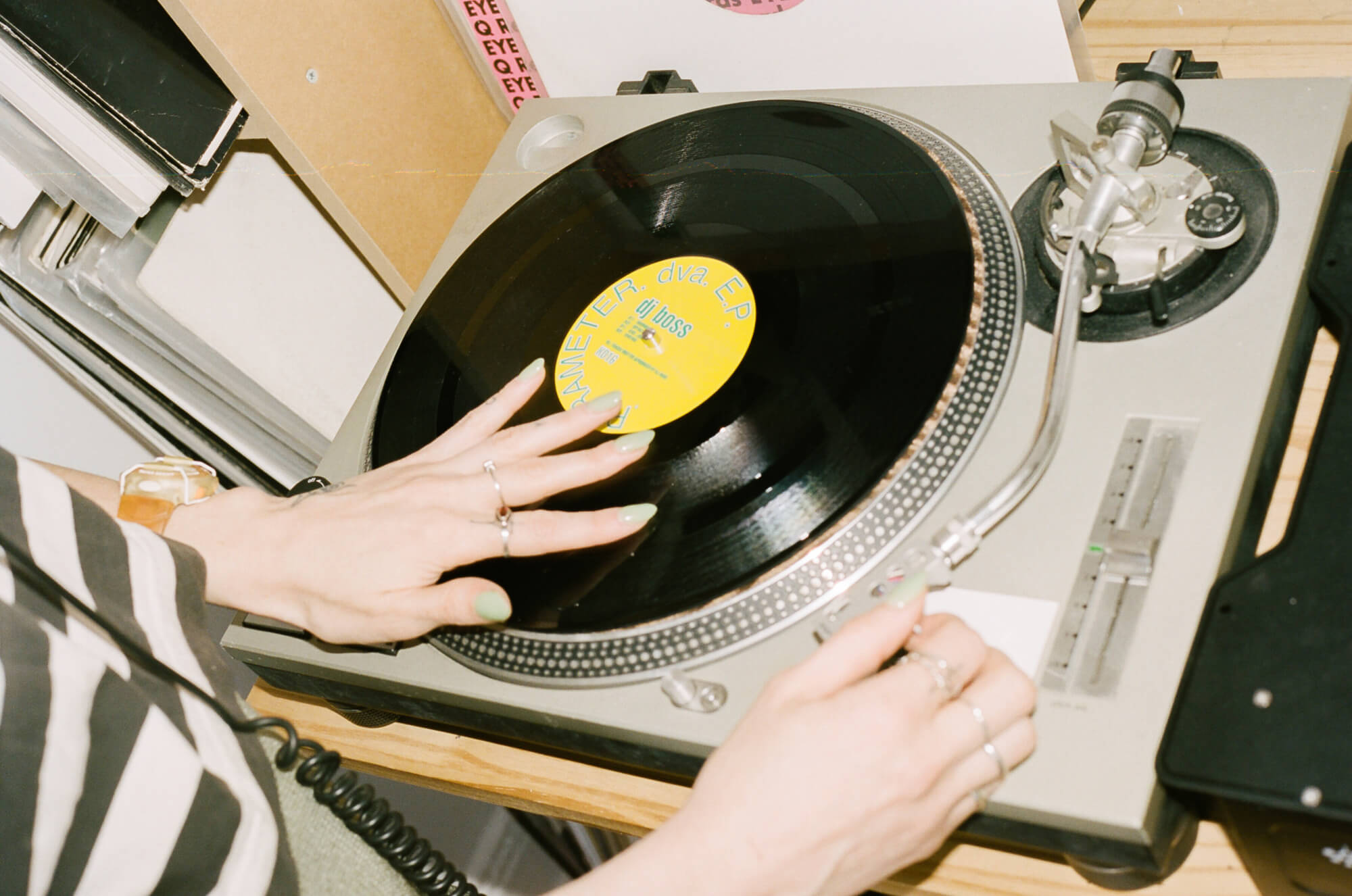 This is one of my favourites from the last year [above]. DJ Boss. He’s a Romanian on DJ Rush’s label. The way he mixed these tracks is so hard-hitting.

Is that lack of being able to find what you’re looking for what lead you to make your own music?

I feel like I needed to make music on my own as a personal fulfilment. It felt really challenging and unobtainable. It’s a crazy feeling of needing to explore that as catharsis.

What inspired you to start Discwoman?

It’s funny because it kind of happened by accident. We just wanted to produce a showcase of all of the woman DJs we knew in the scene. We collected our various ideas and programmed a two-day fundraiser. We had no idea that it would reach so many people. We got a lot of press. As much as we went into it trying to be as official as possible, we never expected it to evolve into this unstoppable force.

Have you noticed a change in the representation of female/non-binary bookings since starting Discwoman?

At the very least, it’s now an open conversation. 5-10 years ago it was easily swept aside. Nowadays, people are working a lot harder. The myths and excuses have all been aired out. That’s what happens when there’s a cultural shift – going from feeling your argument barely gets attention, to it being the truth.

And seeing a global response – talking to women in scenes that are much more scary, sexist and aggressive. It’s heartwarming to see a global community forming. 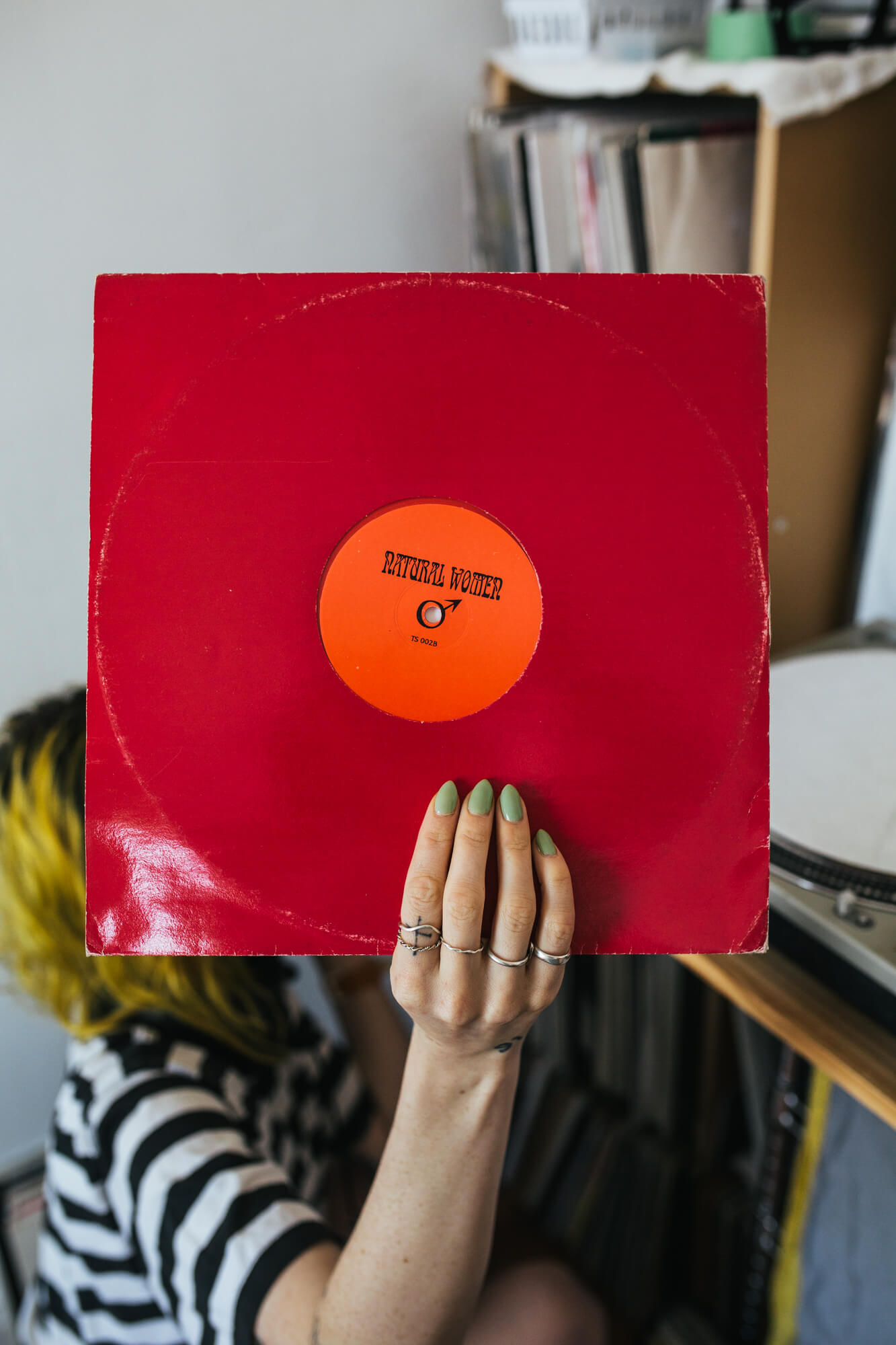 That makes me happy. Any new female/non-binary artists we should be listening to?

On my last tour, I played with Solaris. I really liked what she played. THOOM from Club Chai; her EP they just released is great. I just saw Josey Rebelle play a couple weeks ago, and it really affected me. I was blown away. There’s some weird energy she channels that I’m obsessed with. Super moved.

And what’s next for Umfang?

Downtime. Reset. Get back at it again. 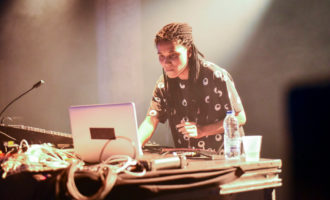