“I ended up getting two blocks of hash for this guy, he gave me his decks and his mixer, and that’s how it started.”

As a 14-year-old growing up in Dublin, Saoirse’s first steps into DJing benefited from a relaxed and resourceful attitude towards soft drugs. At the time, a friend of Saoirse’s was willing to part with his pair of Technics decks and mixer in exchange for a hefty quantity of hash. He, also a teenager, didn’t have the necessary connections.

In what basically represented a half-price saving on the decks, the fateful transaction laid the foundations for a career in music that has seen Saoirse establish herself as a formidable and versatile DJ. Brought up on free parties, often co-organised by her mum, and a household where Tricky and Nick Cave were often on rotation, she became enamoured with hard house and trance early on, embraced during nights spent in fields, drinking beer, or listening to pirate radio broadcasts with her friends. She later oversaw the hard dance and hardtechno sections of Abbey Discs, then Dublin’s premiere record shop for club music.

Saoirse spent several seasons living in Ibiza as a teenager, spurred on by an eye-opening trip she made to see DJs like Sasha, John Digweed and Ricardo Villalobos. A move to London followed, the city that’s still her base now and where she was first introduced to its treasure troves of garage, jungle and dubstep. Ahead of her performance at Dimensions Festival, we visited her at home in East London, as Saoirse picked out some memorable records from her collection, connecting them with the many formative experiences she’s had with dance music so far. 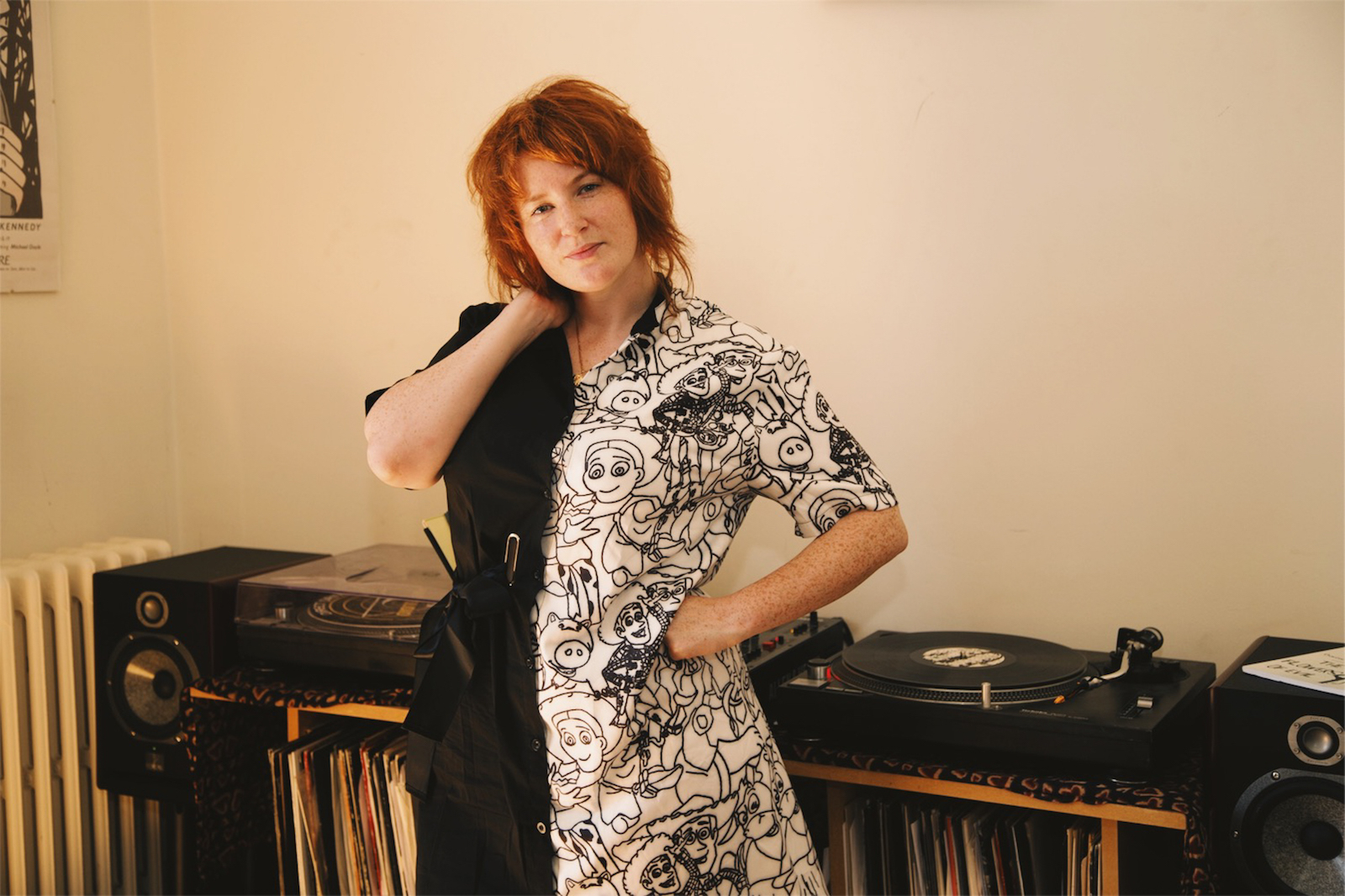 Let’s start somewhere near the beginning. Could you pick out a record from the period where you were first buying dance music?

The first one I bought was Paul Glazby, ‘Kick It’, which is a killer record. Unfortunately, I don’t have it here because all my hard house and trance is back in Dublin. I have about 2,000 records back there that I’ll probably never play again, but I’m not ready to let them go.

I think there’s something that’s really interesting about earlier trance records, which had that fertile, mixed up sound, where it feels like it didn’t quite know what it was.

Definitely. Later it went to a place where I just wasn’t interested anymore. But I really agree with what you’re saying about how it didn’t really have a name, or you couldn’t define it. And I actually think that a lot of the stuff that I turn to now is music that you can’t really put a label on it. I really loved that era when it was going from trance to prog house and it had a little bit of techno in there. The only thing that would define it would be the DJs playing it. So you might have people like Digweed and Sasha, or Dave Clarke and Carl Cox, playing this stuff. You can define it by who they are. The prog DJ, the techno DJ. 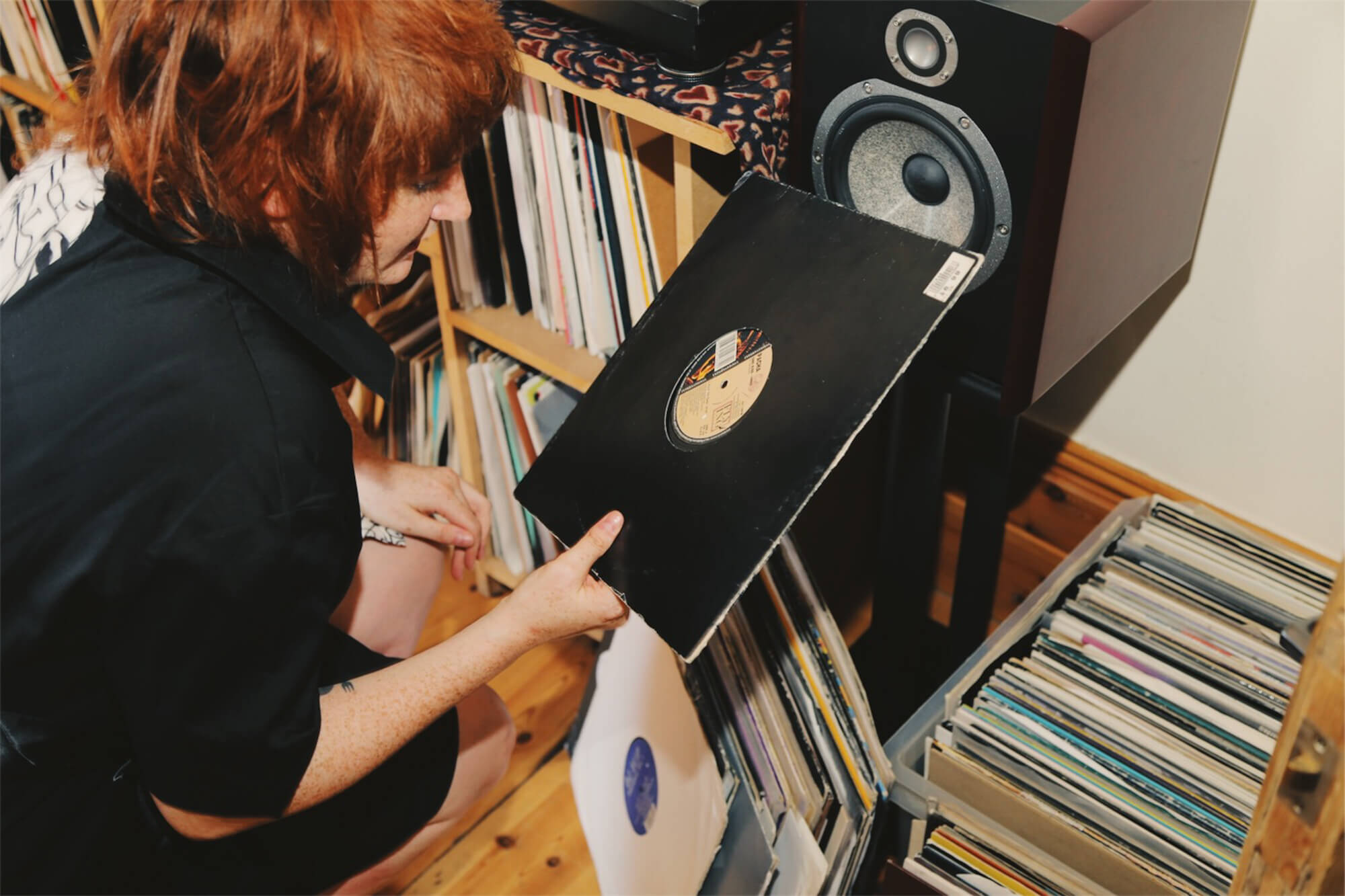 Do you have any of those records here?

Absolutely, yeah. So here’s an example [Pacha – ‘One Kiss’]. It was 1993, so it’s really early. Blaze wrote this record. Blaze is obviously a big house DJ. It was at a time records were doing really weird things. They might start one way and just go another way.

I feel like around that year there were lots of hardcore records as well. Again, records that are really mashing up all this stuff together.

Totally. So I mean, you could argue that this is house or trance. Play it fast and it sounds like trance, but it does all this weird stuff… it has a guitar, and then out of nowhere it basically turns into a garage record! A lot of that early stuff did that.

So that predates when you were working in the shop?

It does. But that’s what was being played then. 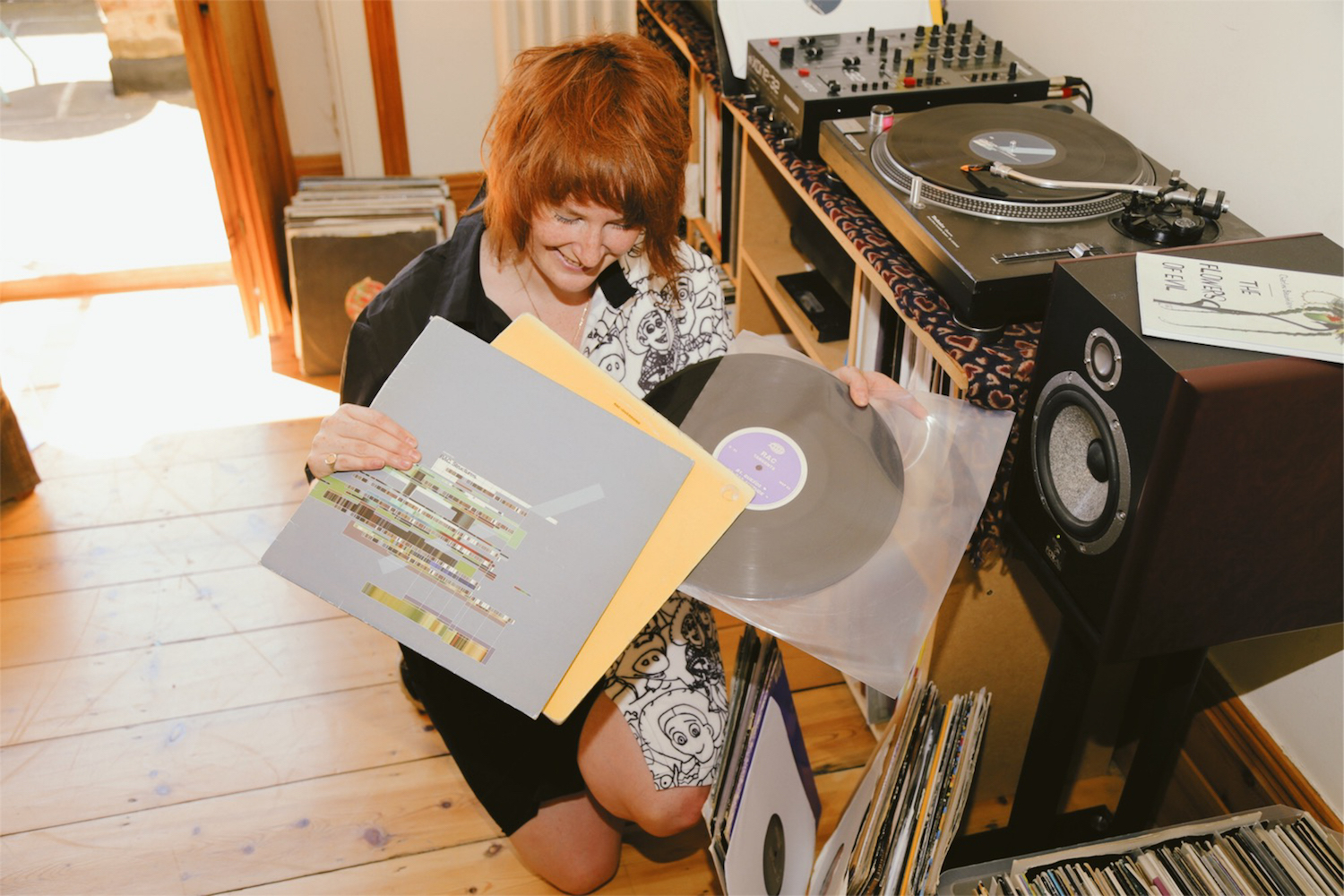 RAC’s ‘Continua’ is probably one of my favourite records that I own. This is ’96. This is a perfect example of where it has a trance-y atmospheric thing, but most people would define this as techno. RAC is Chris Duckenfield and Richard Brown and they made probably my favourite music on Warp.

It feels like a parallel, more uptempo universe to the Ninja Tune stuff that was coming out in that era, with artists like Funki Porcini.

Yeah, totally, and I think they were talking to each other a lot. It’s like house, but it’s before house became more soulful in a way.

It’s got that euphoric, synth-y sound.

Exactly. But we would’ve called it prog rather than house. So prog always had synth-y melodies and chords. It’s really “take drugs” music. Every time I play ‘Rain Dancer’, the faces that I see people pull are pretty funny. 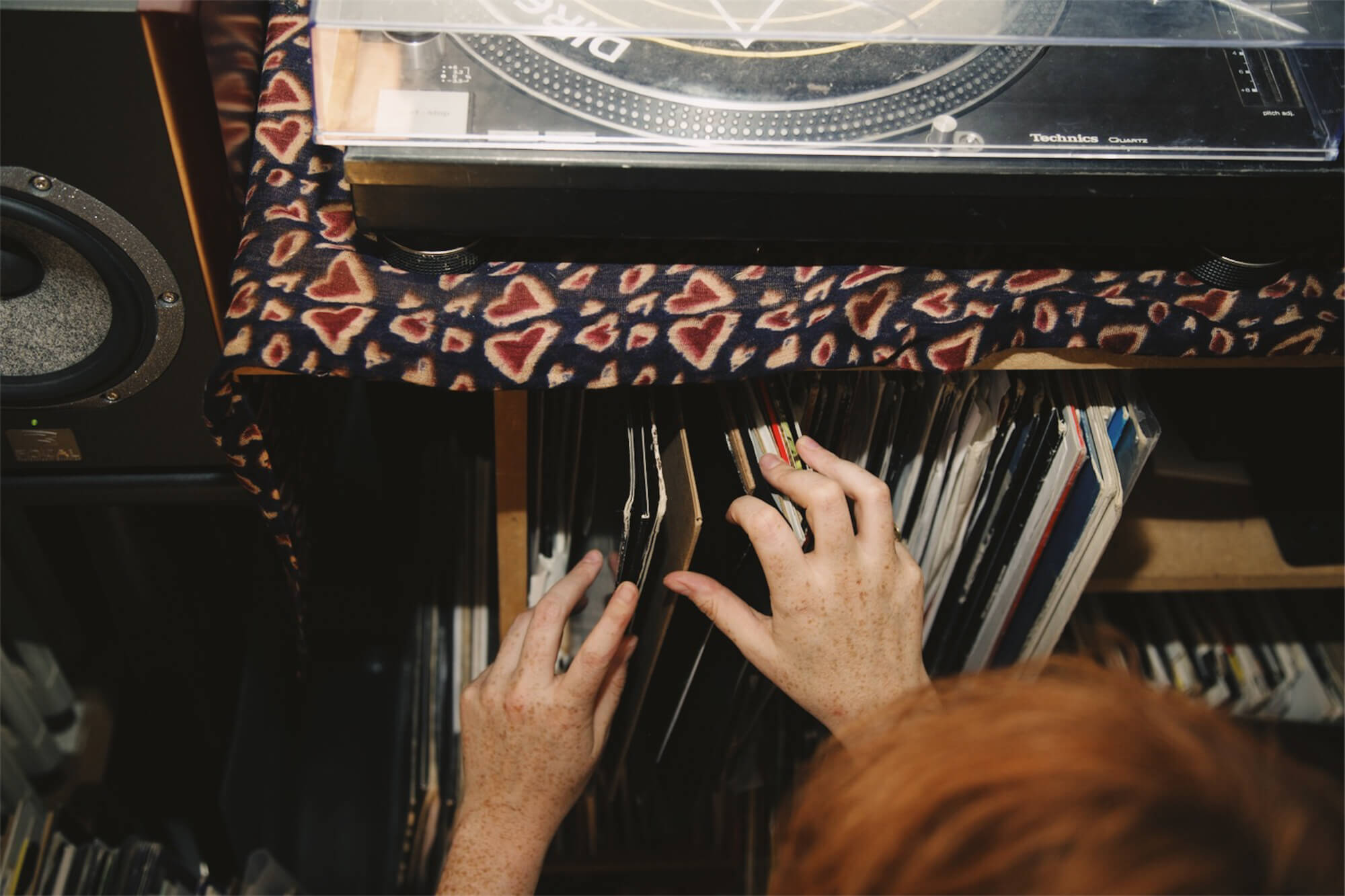 Having worked at Abbey Discs in Dublin, how would your characterise the places that you did then go on to DJ at?

I don’t know if you’ve ever been to a hard house rave? I mean, it’s just ridiculous. Everyone has their tops off, everyone is really, really high, and in Dublin those parties were actually quite dangerous. The shop that I used to work in used to buy lots of second hand records from people who came in and just sold their entire record collections, because they needed the money. As a result, the shop was the place to go to get all the early classics, and it’s where I learned a lot about a lot of the early ’90s dance music that I play now.

Do you ever get worried and second guess your own taste when you’re buying records to DJ with?

I struggle sometimes with placing myself. I often ask myself, “Who am I? As a DJ, what am I, where do I belong?” And that’s actually something that I question myself on all the time. I’m like, “Do people like me, do they care, do they look at me and say, ‘I don’t know where to put her.'” And then I say to myself, “That’s a good thing.” You don’t want to be pigeonholed. 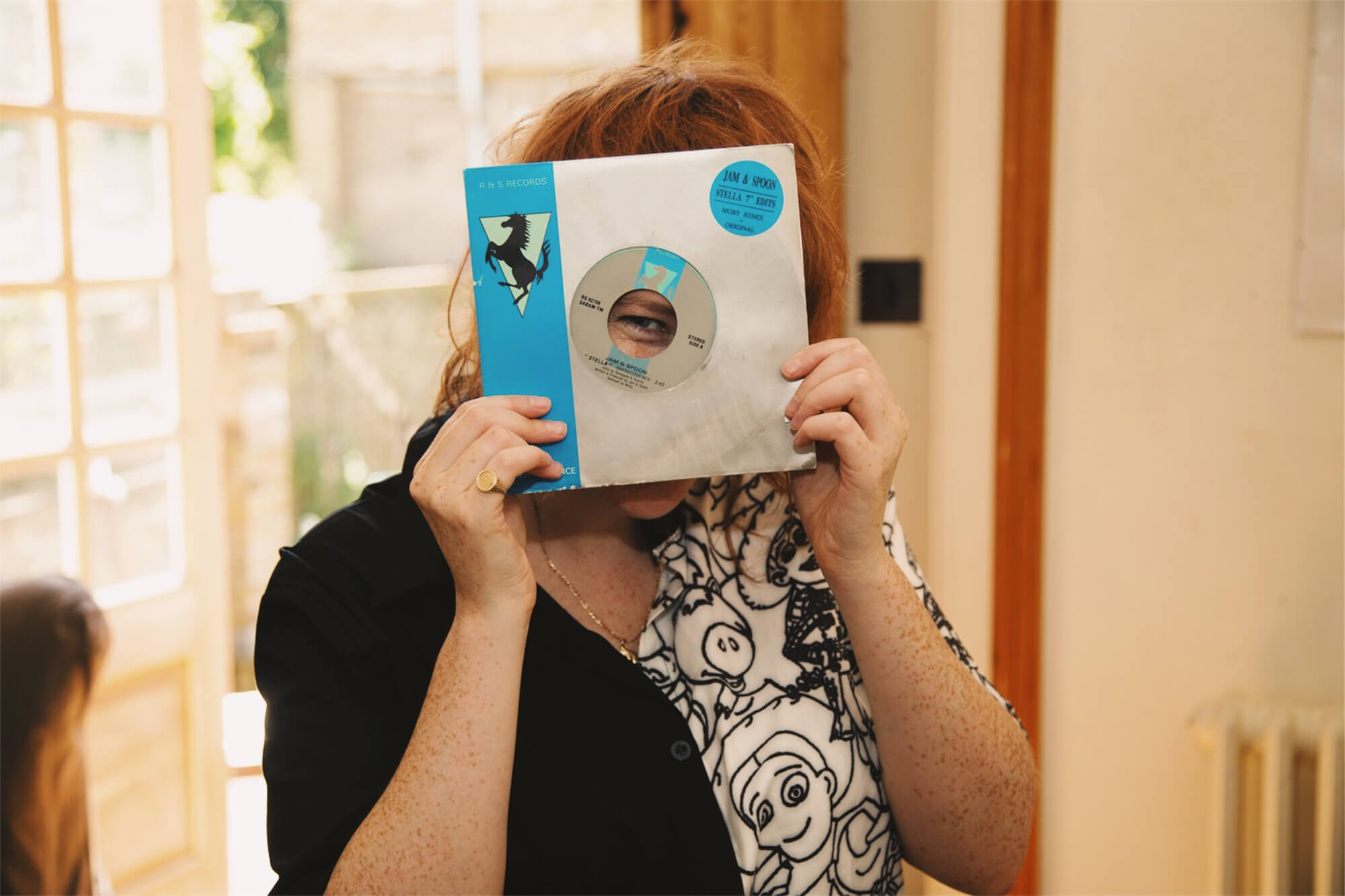 I think a lot of that is because I’ve spent so many years, from the age of 11, in electronic music. I was going to these free parties when I was a kid. I was working in a record shop from age 16. Then I went to live in Ibiza, I spent a good three seasons living there, selling tickets, DJing. Then I came to London and I got really into the minimal scene. And then I discovered stuff like jungle and garage. I’d never really spent any time with that. My excitement towards that was like it was for people when they were like 15, growing up in London. I was just like, “Oh my god, what is this music?”

My ex-partner had an amazing record collection, just loads of amazing music. She’s a born and bred Londoner and she was just like feeding me this stuff. I now try and get a lot of that stuff into my sets, but because I only started really discovering it about 10 years ago, I don’t have a huge collection on vinyl. Nearly all of this here [gestures toward one section], is all old house and garage, because you can kind of play a lot of those records together. 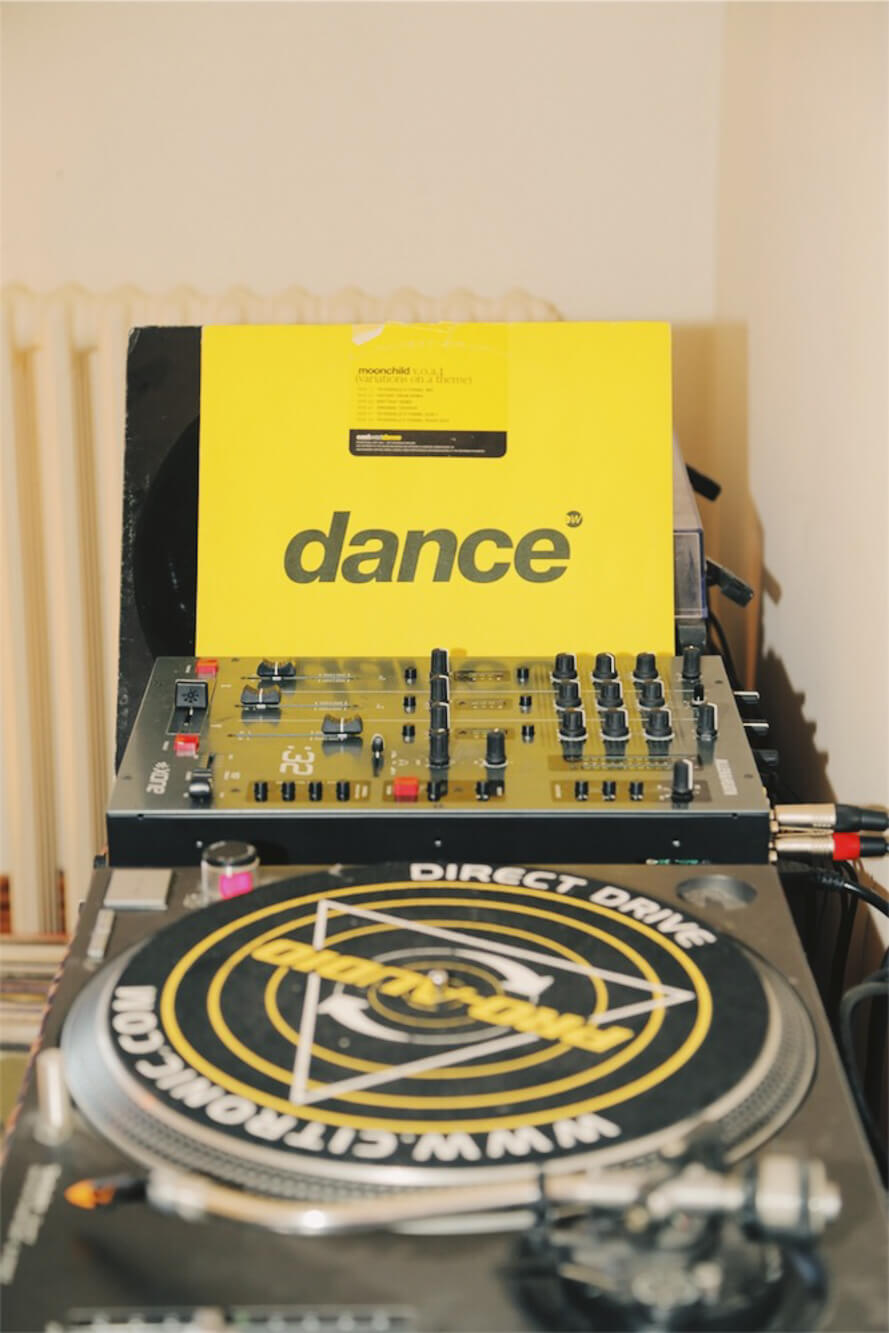 When was that Ibiza period? You were working in the record shop, and then…

Yeah, I was working in a record shop. Then I went on holiday in Ibiza and I was like, “I need to live here.” At that point, I was really into trance and hard house, and I went to Space. I swear to god, I felt like I’d never heard music like that before. I must’ve stayed there for about 18 hours. It was when Space had the open terrace and it was very gay, there were a lot of trans people, there were a lot of people from all walks of life. It was a completely different place. They’d give you one wristband and you could go in there for like three days.

So I just decided, that was it: this is the place for me. An island dedicated to electronic music. Back then, that’s like literally all that I really cared about. I just saved up that year and went out and lived there.

So was that when you first encountered minimal music?

Yeah. I went to DC10 and I was like, “What the hell is this music?” I’d never heard anything like it before and DC10 back then was absolutely wild. It was lawless. It was predominantly 95% Spanish-Italian people. There was a big gay community in those clubs, and it was just really, really crazy. That was where Luciano played and I think where Judy from Fabric discovered Ricardo. 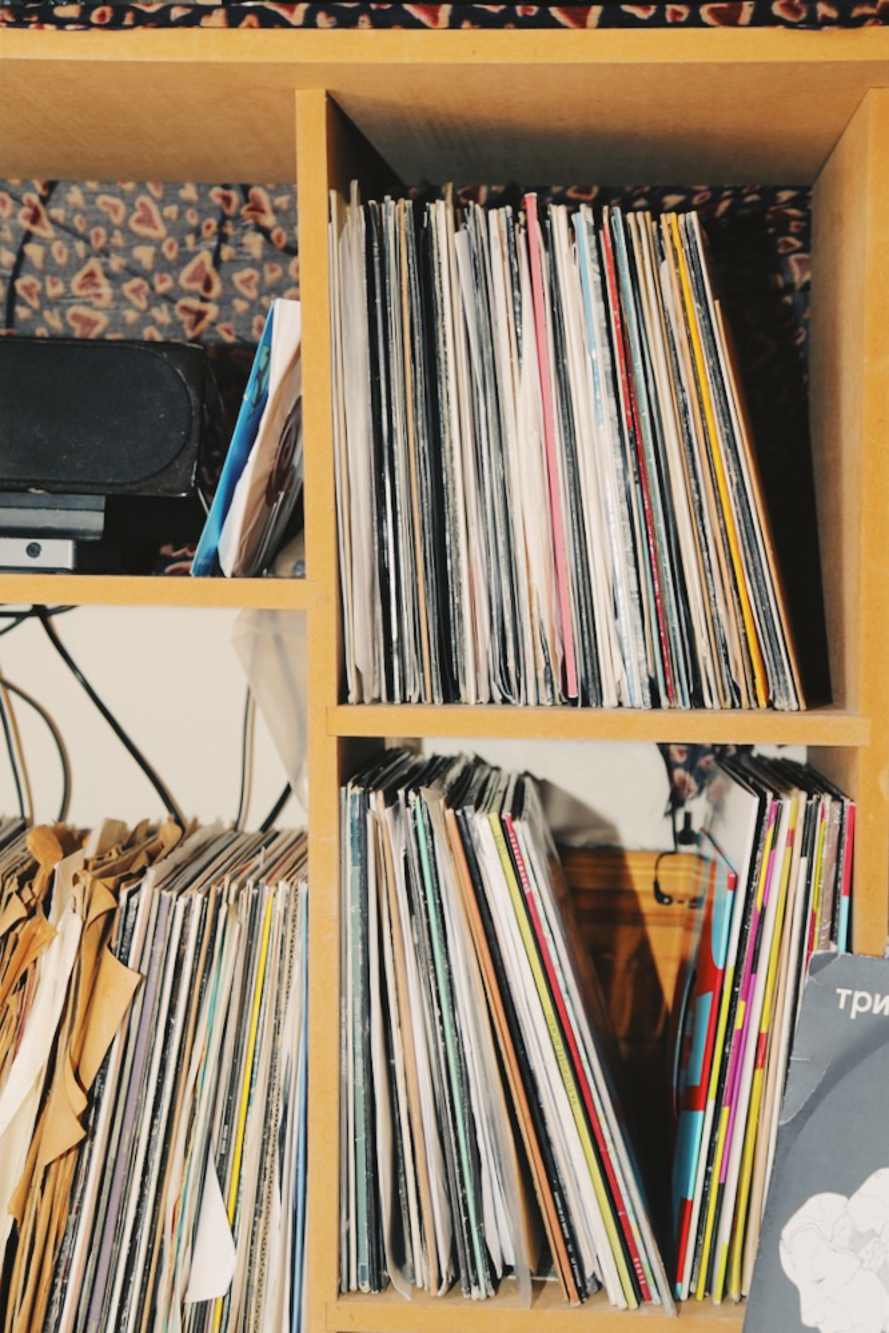 Do you have a record that reminds you of that era?

I do actually have all of the Perlon releases. I would say that it’s probably the label I have the most records of. Perlon is basically a label that you would never play a whole set with. It’s amazing bridge music. You drop something in or play at the start of the night or the end of a night, because it’s quite stripped back.

Your sets aren’t generally too stripped back.

No, but I’ll throw some of this stuff in. [Puts on record.] 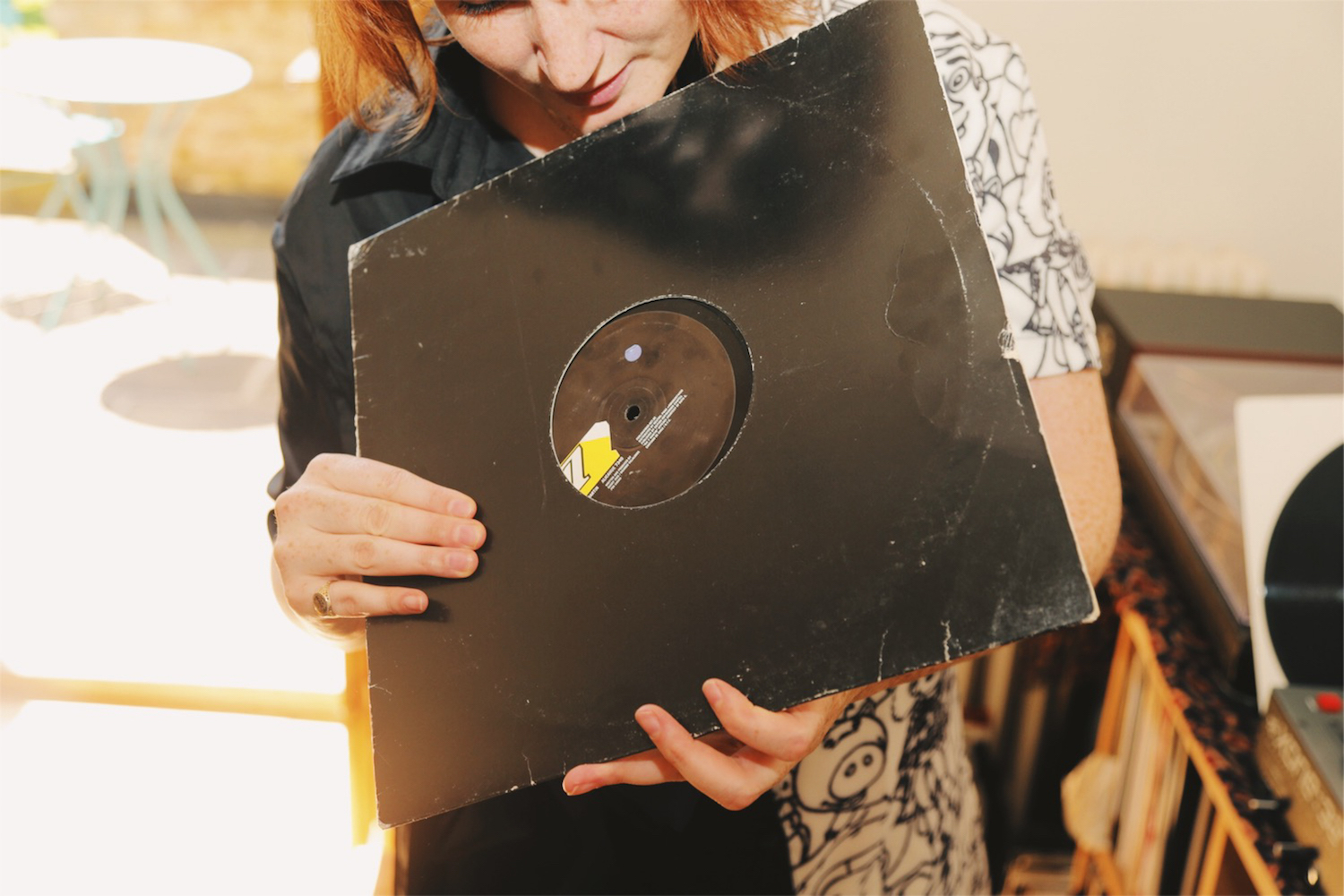 This is Ricardo Villalobos and Martin Schopf’s alias Ric Y Martin. This was 2000. When I was going to DC10 it was about 2005, but it was still a lot of this stuff. So thinking about this, compared to the other stuff I’ve played you, there are loads of hi-hats, and it’s really quite in your face. Going into a nightclub and hearing this stuff – this would be the heaviest it gets. I was just like, “Woah, what the hell.” I really loved it.

I wonder whether it makes you think on a bigger scale. These records are like these tiny building blocks in comparison.

It’s patience as well. Especially with Ricardo… this is probably eight or nine minutes into this track, and that’s when he brings in the clap. And to wait that long to bring in the main percussive element like that… minimal was always about waiting, waiting and waiting. 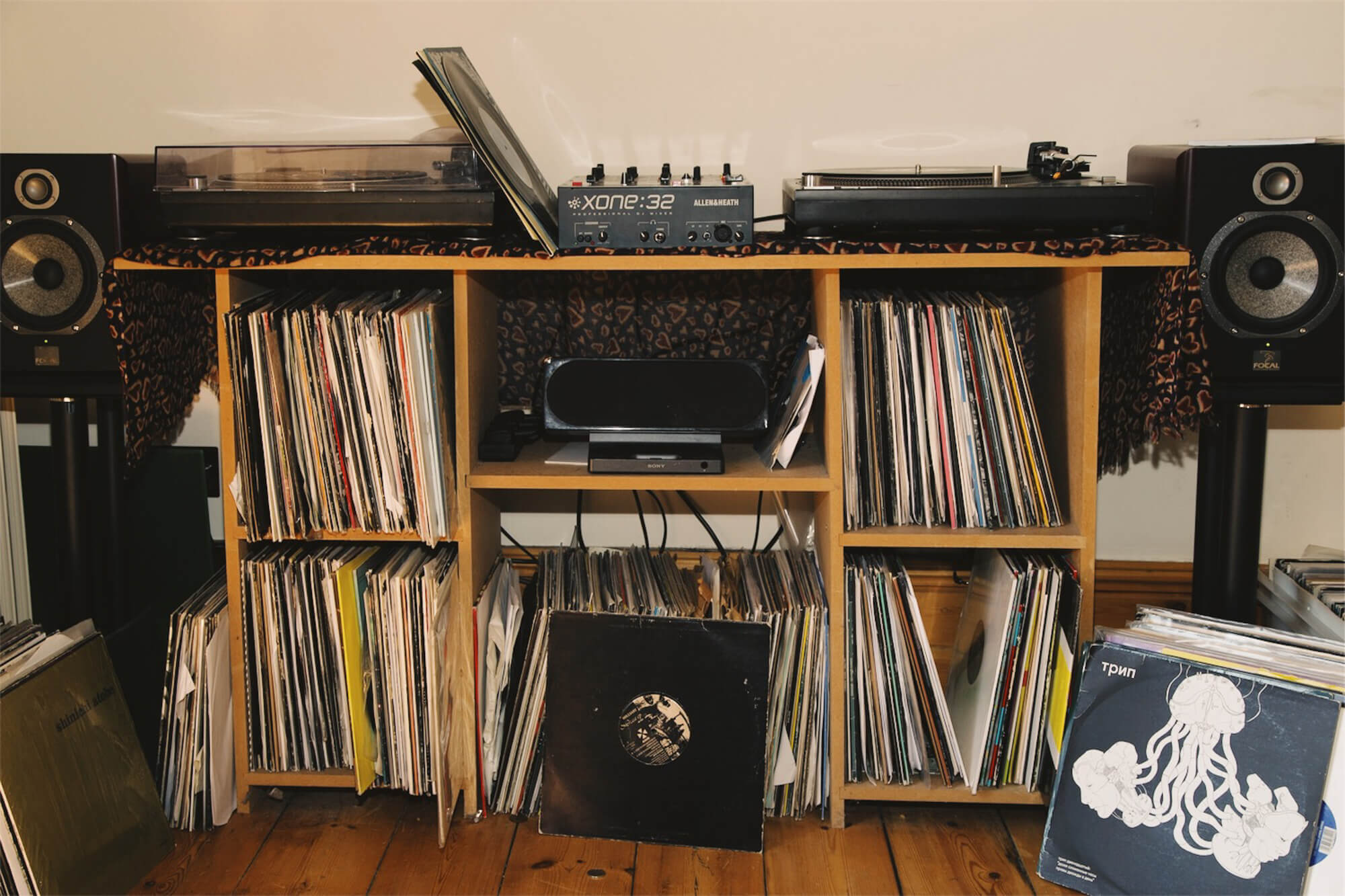 So you had your minimal period, you discovered jungle and garage, and now you’re in this position where there’s a huge range of music which you feel an affinity towards. How does that affect the way you think about collecting music now?

That could be from these free hippy raves I was going to, to Ibiza, to these trance air bunkers I went to in Rotterdam when I was 17. I’m listening to a record and I’m visualising where it would be placed, and if I’m like, “That could happen,” I’ll buy it.