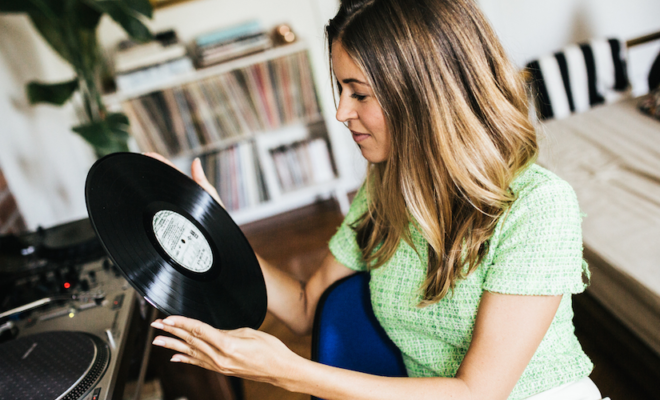 Born on the idyllic island of Florianopolis in the south of Brazil, Renata Do Valle grew up eavesdropping on her mother’s parties, developing an ear for imported disco and the bountiful variety of samba, soul and MPB of her native Brazil.

Having set sail for New York, Do Valle began to build her own collection, DJing across the city and launching her own label Hello Sailor, which has since released a trio of astutely curated 7″s that step to the beat of her wandering soul.

With an eye for artwork and no time for remembering names, Do Valle talked to us about how records have the power to transport you from Brooklyn to Bahia and back again. You can listen to her latest selection while you read here.

Take us back to your childhood. What were your first experiences of records?

Growing back in Brazil, my mum was a ballet and jazz teacher and she would teach dance lessons in our home town. She would come up to New York and buy recently released records that were not available in Brazil. She would bring them back and throw parties and play those records, and I remember just peaking round the corner and observing people listening to disco and soul and funk.

I think that pretty much influenced me musically, and also seeing how people dressed I think was also a big influence on me choosing to go and study fashion design. I still work with textiles, so the combination of music and fashion really influences me. Grace Jones, Stevie Wonder and also the Brazilians of course, Jorge Ben, Tim Maia. I went to their concerts when I was little and absolutely loved just dancing. It was part of my teenage-hood growing up and listening to those guys. The Brazilian music combined with that disco scene that I got from my mother – I think together they pretty much defined my identity and my taste in music and what I try to inject into the record label. 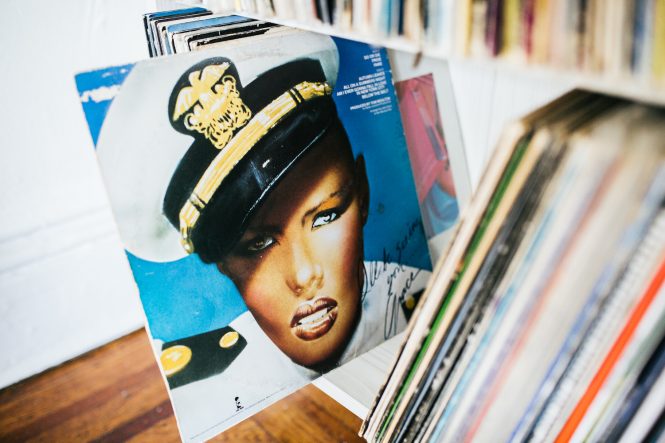 Do you remember when you first started buying records yourself?

I think it was later when I was living in Sao Paulo. I started to collect records and then when I moved to New York, I recall leaving them back home and losing touch with all of them because of the moving. So I pretty much started everything again in New York. There are so many great record shops around and I really got into the habit of collecting records, going to record stores locally and also buying on Discogs. And then the record label just naturally came along as a result of enjoying collecting and throwing the parties here in New York City and the Brooklyn area.

So that’s where the world of Hello Sailor began?

It started at a bar in Williamsburg. I reached out to Phil South [Golf Channel Recordings], he used to own this great place in Williamsburg and he liked the idea about doing a monthly summer-sunset party at their place and I just started to invite my friends and local DJ friends and it then became a great community to celebrate music. And then when I thought about starting the label I reached out to Phil again about pressing plants in Brooklyn and so Phil is a big pretty person in helping me out with Hello Sailor. With baby steps that’s how it happened.

When you got to New York, were you already interested in buying Brazilian records?

I started buying Brazilian records more online actually. Initially it was hard to find Brazilian records in New York, but now these days there is more demand so you can definitely find more Brazilian records. But when I first started here, it was difficult, it wasn’t as available as it is now. And I don’t know whether my record label has a part of maybe helping with this.

Do you find that the music plays a role for in connecting you back with your childhood in Brazil?

I was born and raised in south Brazil in Florianopolis. It’s an island surrounded by beaches, very beautiful. And absolutely, the music is a way of keeping me anchored back home. My body is here but my heart is there. And maybe that’s how I came up with the whole Hello Sailor thing – always travelling, with no boundaries, but there’s always a place where your heart belongs. There’s something of that ethos.

The records can evoke all sorts of personal memories.

Given that Brazilian music is so regional, did growing up in the south have any impact on your taste?

Everyone in Brazil grows up listening to samba, which is very organic to every Brazilian. You know, you come out of the belly and you already know how to samba! Your heartbeat is samba! You have samba from Rio, and you have the carnival sounds from the north. Different arrangements, different instruments that you play. And I think that’s what’s beautiful about Brazilian music. I don’t have a preference which I like more or less, I think they’re all very distinctive and have their very particular characteristics that make it so special. It’s like the Brazilian accent too, if you go south you have one, if you go north you have another and that’s played out in the music too. 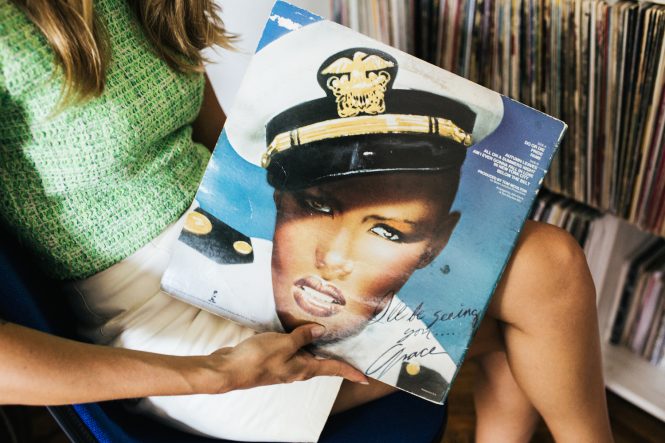 You mentioned Grace Jones earlier. I imagine she was quite influential for you?

Yes definitely. She was also born on an island and she’s a New York City transplant. I can relate to that very much. That feeling of being very different on your island growing up and seeking some different inspiration and finding it in New York, a place where you are welcomed to express your ideas.

How about some of your Brazilian favourites. You’ve picked out a Cartola record…

Cartola is the father of samba. He started in the favela, very bohemian, sitting outside drinking Cachaça and just playing acoustic guitar, in a round of samba musicians. That’s how pretty much everything started. So from that they started the school of samba – the big one that you see on TV. But it all started around bar tables, crying about love and how they were heart-broken about someone they loved who is gone. And they’re just drinking and coming up with these beautiful lyrics.

It sounds quite like the blues tradition in that sense, very rootsy, very based around community.

And then there’s Jorge Ben…

He’s probably one of my favourites but it’s very hard to pick one. Jorge Ben is right there with Tim Maia for me, but I love him. I’m very bad with names though. I remember my music through the artwork. I see the artwork and then I remember what’s inside. It’s much more intuitive.

Also, from the way you talk about it seems like you remember the music by the emotional reaction that it brings.

Some people are great with names and dates. I forget the name of a person within a second, but I will remember their face forever. And I think I’m like that with my records too. I remember the music, the sounds, I remember the party where I played that record, the energy, the love. But I’m not so good with names. I think that’s how I play music and how I pick the artists for my label too. It’s very intuitive, it’s very much how my heart feels about it.

It’s always refreshing to hear people talk about music in this way, especially when a lot of collectors take a more systematic approach to records. Do you find it’s quite a competitive world in New York?

It is very competitive, and I try to not think about it too much, and I just try to do it my way and I don’t really care what people say or think. I know I’m a female in an industry that’s very male-dominated but I’m not going to be intimidated by it. I know that the way I do things is more artistic, and there’s not really right or wrong.

Is insisting on still playing records when you DJ a part of that?

It is very important to me, because I think it’s the whole process that I’m infatuated with. To me it’s a great way of keeping yourself creative. You go out on a sunny day, you get a coffee and buy a book and then you go record shopping. And you collect those records and then if you have a gig you can go through them and, as I said previously, I remember the music through the art on the cover. And the artwork inspires me too. I think the whole process to me is more attractive than just looking at a computer screen and using a USB.

It’s obviously very heavy, I have a record bag which is annoying sometimes, especially when you’re wearing high heals and you have to go up three flights of stairs. But I’d still rather do it, because while I’m DJing I think it’s more enjoyable.

Tell us a little more about the label – where are you at right now?

I’ve released three 7″s so far. The first one was an edit from Joakim of an African disco track. I sent him the track and he really liked it and he put his own spin on it. People really liked it.

And then the third one, the most recent one is with Esa. He’s South African, based in London and he did an incredible job with Tim Maia’s ‘Que Beleza’. He gave it a new arrangement and completely re-did it with percussion which he recorded at his studio. It doesn’t sound like the same song – he pretty much re-wrote it.

You also commission artwork for each cover. That seems to be a pretty big part of it too?

It is, I’m very interested in art and I love the process of finding the right artwork for the release. They’re all new artworks from artists that I reach out to. I like to weave, I hand-dye, and I’m very practical myself, so I enjoy the process. Maybe in the future I will try and paint or do a cover for one of the releases too. I think it’s seamless really between the music and the label because I enjoy it so much!

What’s coming up next for the label?

I’m working on a forth release right now. I’m being very picky about it because it’s not about the number, it’s not about wanting to put another record out just because. I want it to be something really special and I’m trying to put out one, maximum two records a year, not more than that. I haven’t connected yet with the music. I’ve been listening to a few things here and there, but I’m not 100% that they’re my new record. It will come.

It obviously means something more personal to you.

There’s no pressure and I do it all myself, I pick the artists, I deal with the pressing plant, I deal with my distributor. It’s pretty much 100% me and my artists, so it is a very small, boutique label. I try to keep it that way and vinyl-only.

I’m having a lot of fun, but I’m very hard on myself. I am a little bit of a perfectionist at times. I want to make sure everything is perfect, even knowing that there’s no such thing as perfect. It’s the Brazilian way, very relaxed and fun but always with a big heart. 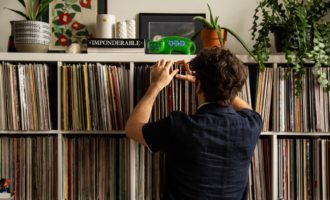