Born in Israel and raised among skaters in Tel Aviv, Berlin-based producer, DJ and label head Mor Elian has a community-driven spark that fuels everything she does. We spent an afternoon at her apartment to find out what has shaped her along the way.

Though Mor Elian’s passion for music developed from an early age, it wasn’t until much later that she realised it could also turn into a career.

As Elian has criss-crossed around the globe – from Tel Aviv to Los Angeles to Berlin – there are two things she’s brought to every scene she’s been a part of.

The first is a deep-rooted love for, and commitment to, fostering those communities. The second is a DIY spirit, one that she hopes to bring to others.

During her teenage years, Elian worked at a skate shop to fuel her record buying habits, throwing parties for friends along the way. When Elian moved to LA for different opportunities, she put down new roots, while still visiting her former haunts and local shop The Third Ear.

While in Los Angeles, Elian took a music production course during her art degree, learning how to make tracks both through her studies as well as asking producers she knew for help. Launching a regular party called Into The Woods with Jimmy Maheras, Elian brought house music pioneers like Theo Parrish and Moodymann to the city.

To wit, despite a subsequent move to Berlin in 2015, launching the Fever AM label with her partner RHYW, Elian’s commitment to the dance community in LA remains.

“It’s not like Berlin, Amsterdam, New York, London – house and techno, electronic music will always keep going no matter what clubs do… It’s more challenging in LA, so that’s why it’s a real purpose for me.

“I’m not worried about Tel Aviv as much as I’m worried about LA nightlife shifting too much, then house and techno kind of leaving the zeitgeist of the alternative scene.”

Ahead of a set at Gottwood festival, we caught up with Mor in Berlin. 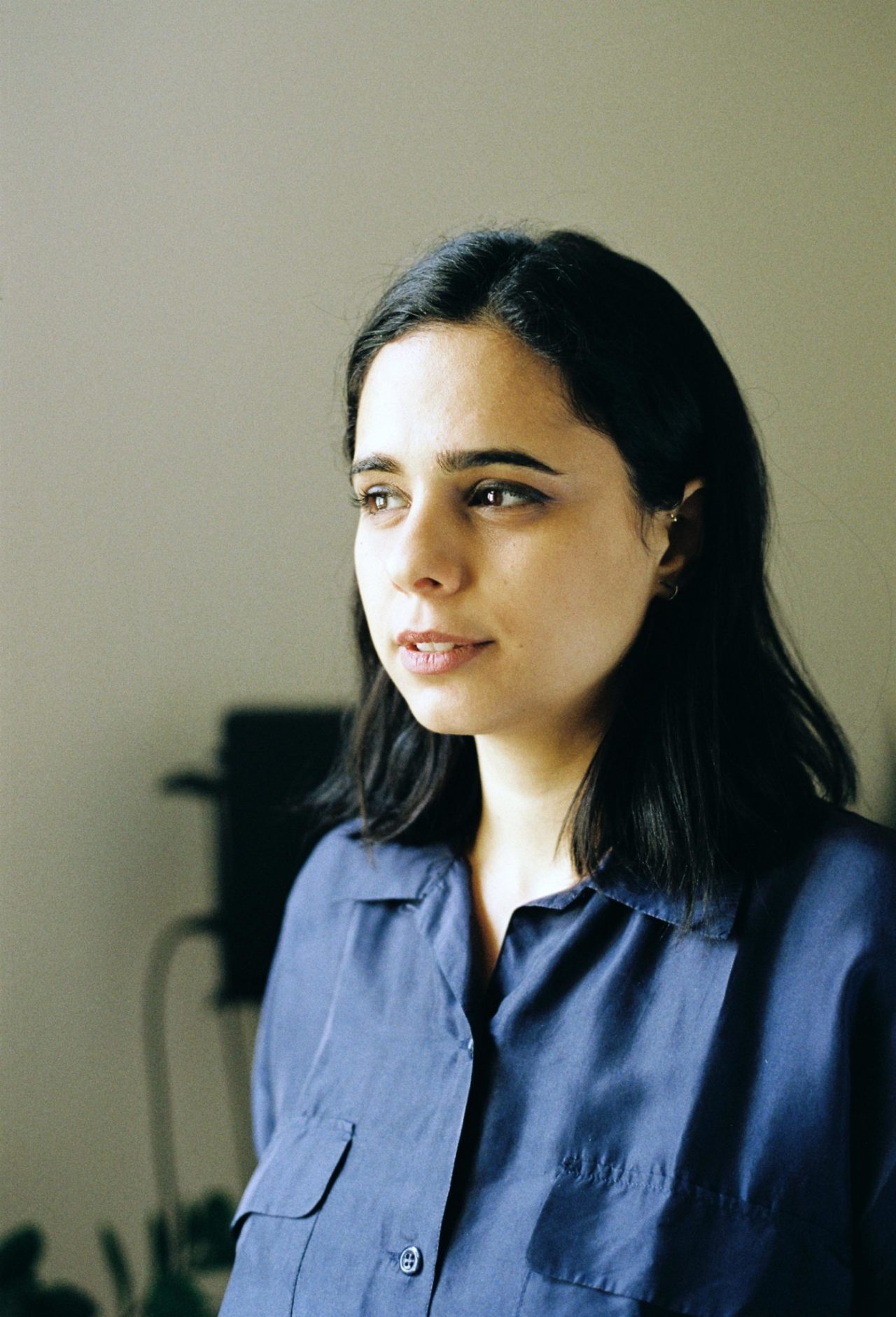 Did you have a musical upbringing?

My parents weren’t diggers or anything like that, but they always liked great music. They’re Middle Eastern by heritage: my mum’s family is from Yemen and my dad’s family is from Iran. They never really liked or listened to the music from that region, they were into western music. My mum loves jazz; my dad likes classical music and opera.

Did they collect records?

We had a record player when I was a child. In the ’90s, my parents bought a CD player with an amp, and gave the turntable away. But when I was older, around 18 I think, I went to my grandfather’s house, and I found my aunt’s record collection. It was very cool – a lot of prog rock. She didn’t want it, so I took it all.

Did anyone else in your family influence your music tastes?

My sisters are a little bit older than me, and they injected a lot of music into my life. They were music obsessed, mainly collecting CDs, not records. But, I remember when my sister bought a pair of decks and a mixer to start DJing when she was 19. I was like 10 or 11. I had no interest in it, but I thought “Oh! she’s cool!” I didn’t think ‘I should do this!’ when I was that age. That happened later, when I was a teenager. 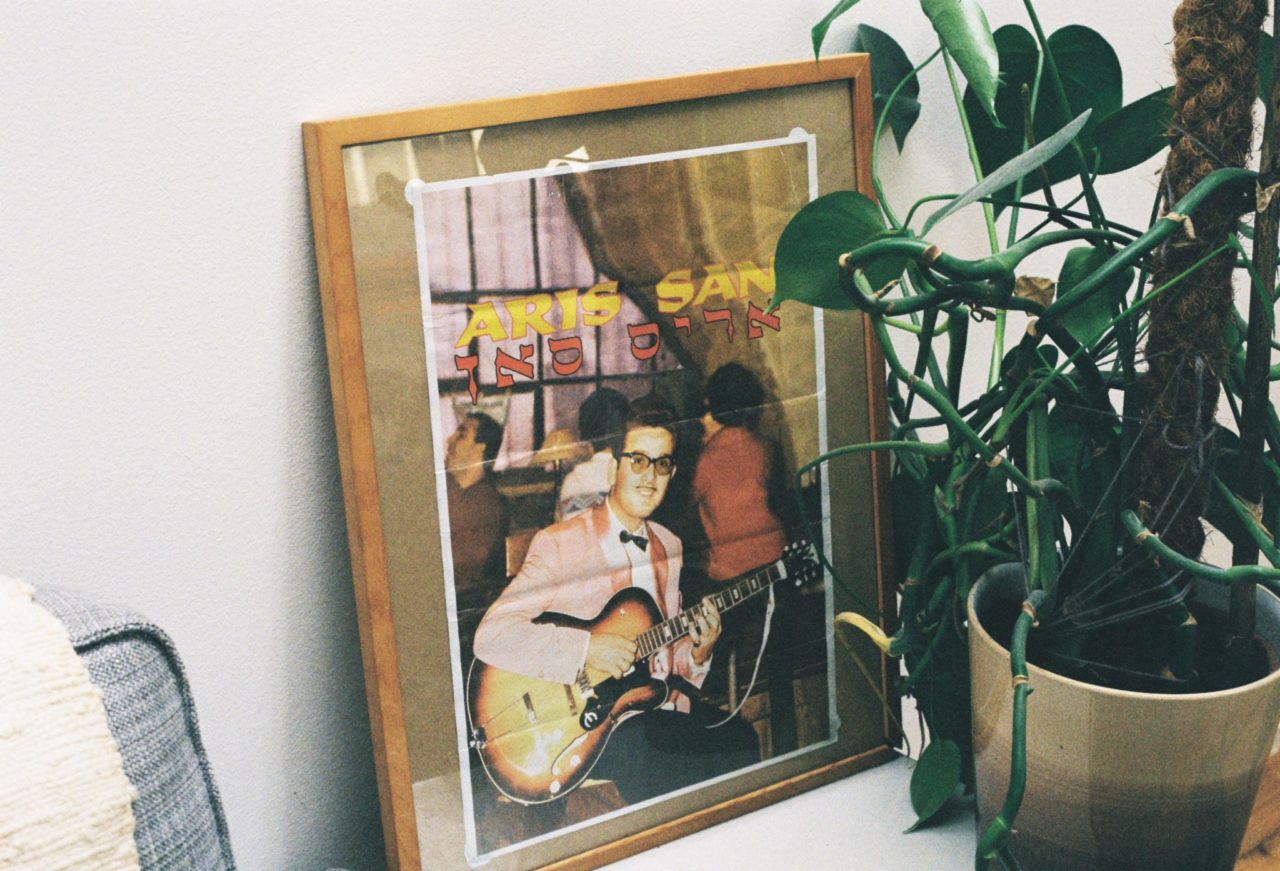 I matured early, musically, because of their influence. I was listening to groups like Radiohead, Prodigy, lots of stuff from the ’90s, Brit Pop – Suede, Oasis and Blur. UK music was huge in Israel.

When I was 16 I worked at a skate shop, which was across the street from the best record store in Tel Aviv called The Third Ear. I would go into the shop and just say, “tell me what you have.” Then listen, listen, listen, and buy CDs as well, because I didn’t have that much money. 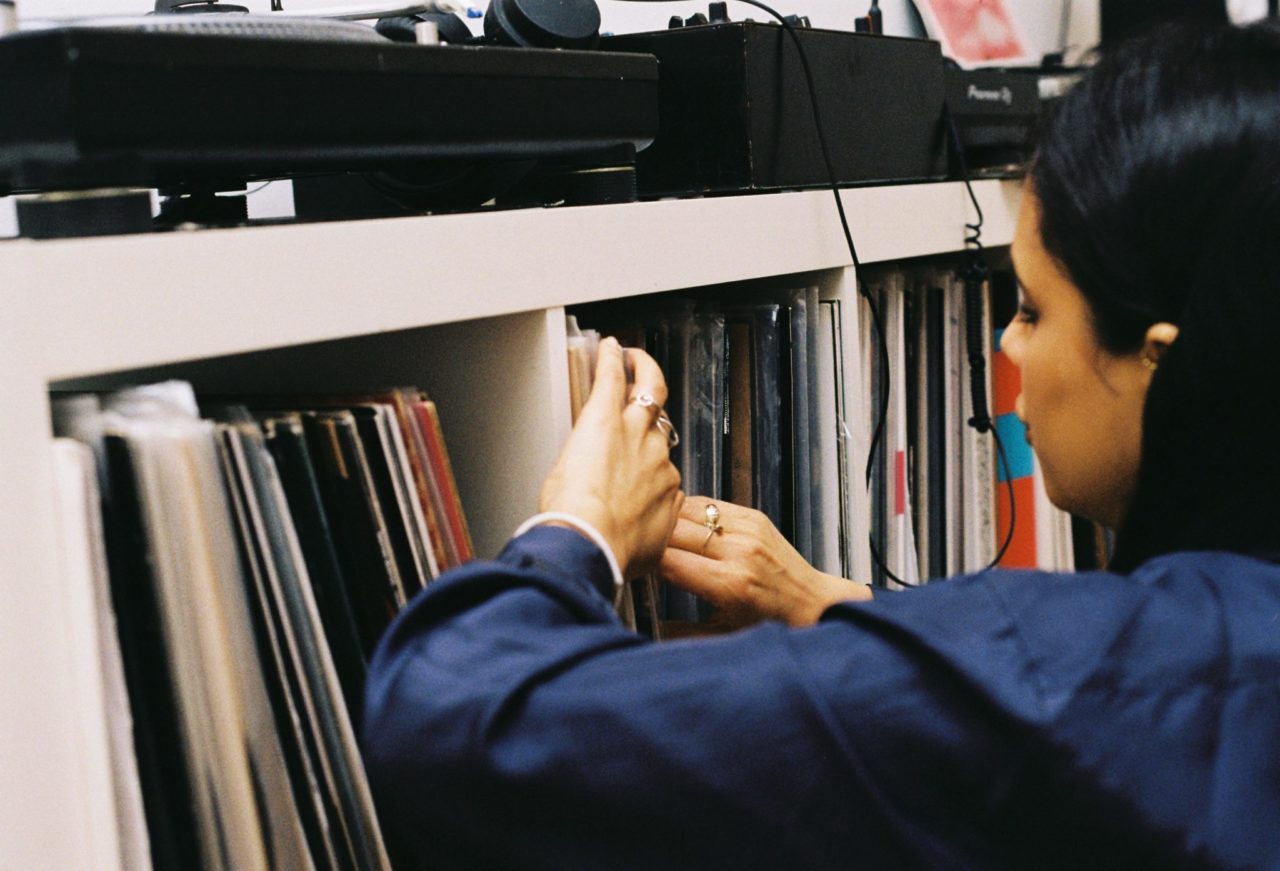 Any money I had from the skate shop I would put towards music and records. Well, that and vintage clothes. Let’s not pretend… and going out as well! I was broke all the time, because I didn’t have an gauge, I was living with my mother.

One day, my mum came and said, “the bank called, you’re over-drafting a lot. I’m taking your card away because I’m the one who’s liable for you. Even though you have a job and you pay for all your shit, if you overdraft then I have to pay for it. ”

But, I memorised the number of the card. So I’d go into the store, check out the records I wanted, and pretend I’d left my card in the skate shop. Then I’d walk back across the street, call them: “Ok the card number is blah blah blah.” 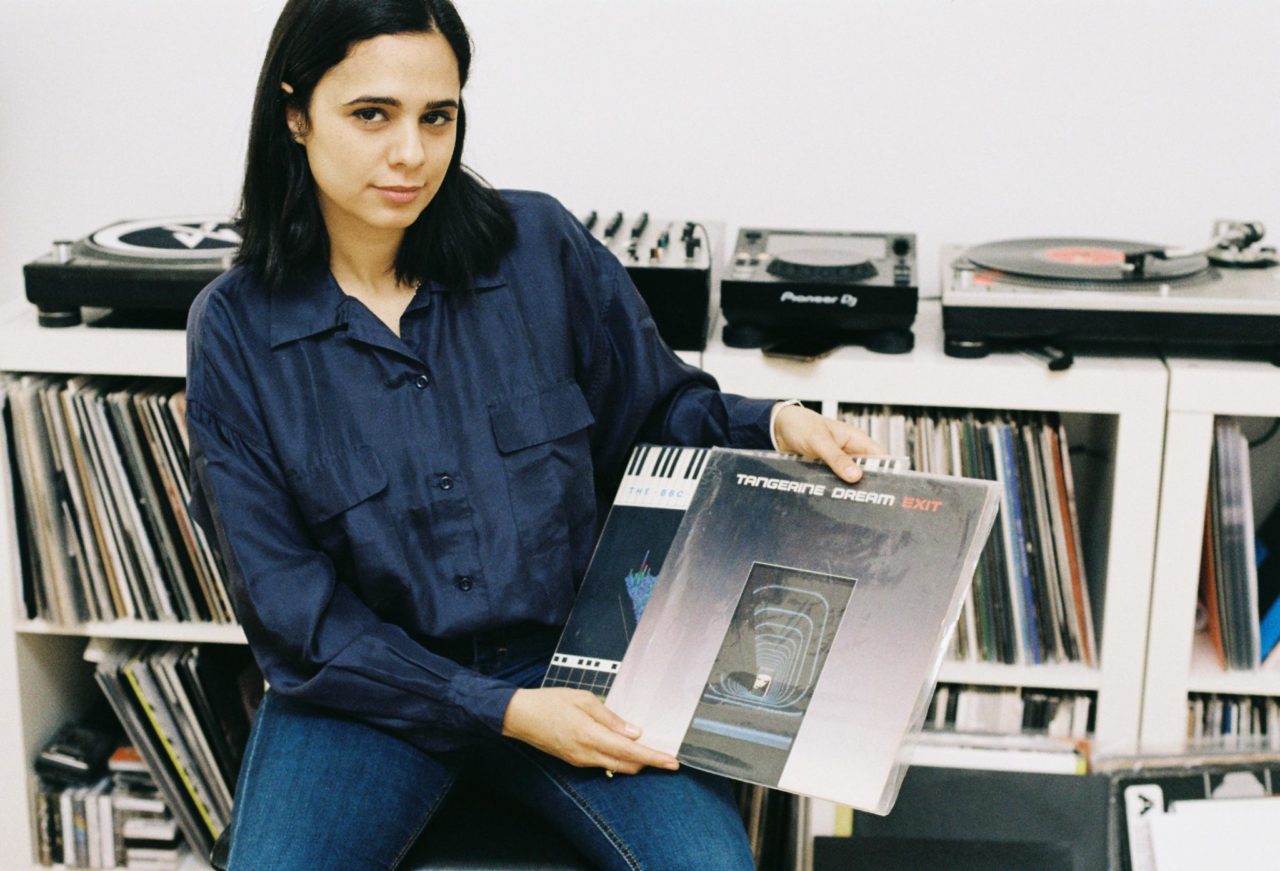 So you were still getting them on the sly. What sort of records were you buying?

The first record I bought was Tangerine Dream’s Phaedra, then a lot of Yes. I was into prog rock, jazz and krautrock, like Amon Düül.

The Third Ear guys were always so kind to me from the beginning. They raised me. One of the employees, Rani Zager, was into noise music, and introduced me to that, Blonde Redhead, Aphex Twin. He’s a wizard.

Were you listening to those styles of music with your friends as well?

It was more punk, a lot of drum’n’bass, dub, dancehall and hip-hop. I was hanging out with skaters, that’s what we were into. I wasn’t really DJing then, but I did a couple of club nights with friends at some odd locations.

You were putting them on yourselves?

Yeah. One of the best parties was a kind of finale – around the time of my birthday, right before I moved to LA. A friend of mine came from a wealthier background, and her parents had just bought a huge house outside Tel Aviv. They were going to strip it all down and renovate it, so they just said, “go in and fucking destroy it.” We set-up decks and had all these hip-hop DJs come in.

I still have the flyer – we made it as a business card with a number you had to call for info. My nickname was Mor Fire, and the guy I did the party with was called Yoni Lite, so we named the whole thing Mor Fire versus Yoni Light.

How many people turned up?

Like 5-600 were there. Two floors. Kids were jumping from the balcony to the lawn. People graffitied the entire place. Bongs everywhere. Full of skaters and stoners. People are still talking about that party. I moved to LA right after that.

Did you already have a view that you wanted to make DJing a career back then?

I always felt like I wanted to be part of music, but I never had the courage. The more I started dipping my toes into it, the more I felt confident that I could do it. I saw that I could do this. This could be my life, don’t be afraid.

It took a long time, but slowly as I progressed I gained more confidence. When I was a teenager my friends were DJs, like the line-up you saw from the party when I was younger. They all played for free by the way because we couldn’t pay anyone.

I always felt like you had to be really purist about how you do it. I was so intimidated by how much all my friends knew, and how good they were technically, that I never felt like I could.

I studied art, but when I was in college I took a production class – we studied Reason, Cubase and Fruityloops. My project was to finish a composition, I don’t even know where it is. It had vocals on it.

Is that when you started making your own tracks?

Many people start that way, it’s not something to be ashamed of. You need to ask for help to figure out how to do things on your own. Like, ‘can you show me how to create a beat on midi?’ It’s not complicated, and if people ask me now I’ll go in and help them as well. Especially women. I believe you can bring a lot to the community in your own different way. For me, whether its booking people with my party in LA or releasing people on my label, or if someone has a question, I’ll take the time out of my day and answer them. 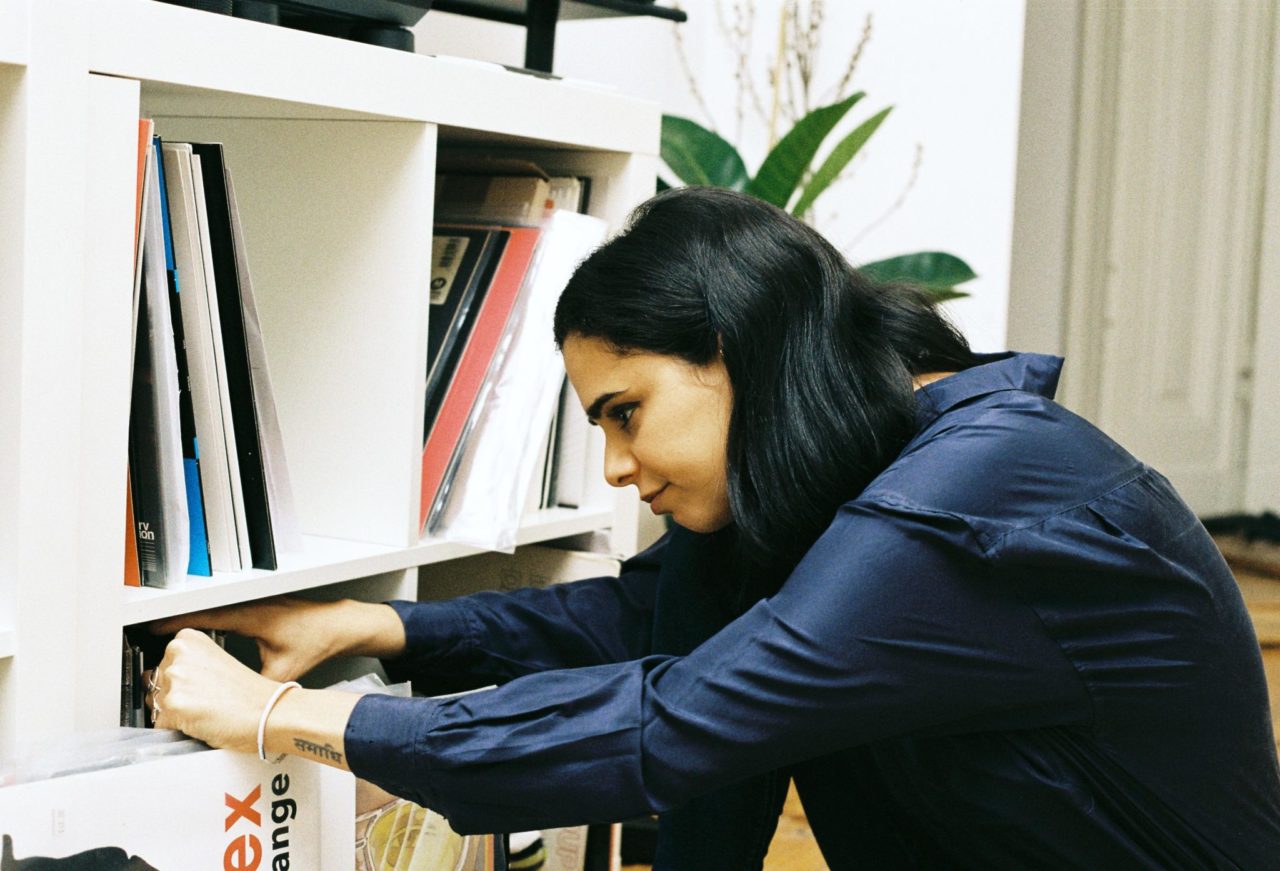 My first attempt at making an electro track was in LA I asked my friend how to make the beat… This is exactly what I was telling you: “how do you make electro, wheres the kick, wheres the snare?” I had the TR08, the new one, the green ugly ones with the green lights.The hats are really nice but the kicks are not very strong.

Did you have a set-up in LA?

My roommate Serge had one, so I used his. He’s a big collector, mainly rare groove. He spends serious money on it. We didn’t really mix there, we just went to use his set-up. Then we had a listening station – our house was really big so he had a separate unit with all his records. So I would go in and use it because we were like best friends. Then we had another little station in the living room where I had a listening record player and a hi-fi system.

When I started DJing in LA, I was kind of more a selector I guess, wasn’t mixing much. I would play a lot of stuff like this Greek record by Levitros, Kara Kaslar.

A lot of highlife too, music from Ethiopia, blues from Mali – like Tinariwen and that whole wave of desert blues. So I was into those, and mixing a lot of different stuff. Then I was throwing in records as well. It made sense somehow.

Do you have a preference nowadays whether you play on CDJs or vinyl?

Everything is so fast paced, playing on CDJs is just out of necessity – it’s a bit easier. But I also make a big point about trying to play records as much as I can in my sets, so that art form doesn’t die out. I try to maintain this by buying records regularly. Every time I’m in London I go to Phonica, Tribes when I’m in Leeds, and Idle Hands in Bristol.

How is your collection organised?

By times in my life. So I’ll buy, buy, buy – fill a cube, then I won’t touch that cube anymore. Then I’m more interested in this cube, because it’s more recent stuff. I kind of know where everything is. Mostly.

Do you still buy as much now?

Whenever I go to a different city for a gig, I try to visit the local record store and buy records, so I can, 1: meet the people, 2: maybe introduce them to my label and 3: put money back into the machine. It’s part of my livelihood, so I can’t just take and take and take from it, I have to put into it as well. You have have to buy records, so artists and labels and record shops can keep going. You have to keep the cycle going.

There are different ways you have to inject energy and money back in, so I try to be conscientious about that as much as I can, and support new talent. Whatever I can do, I think it’s important not to just take, but also to give a lot. How much you give is how much people are gonna get. 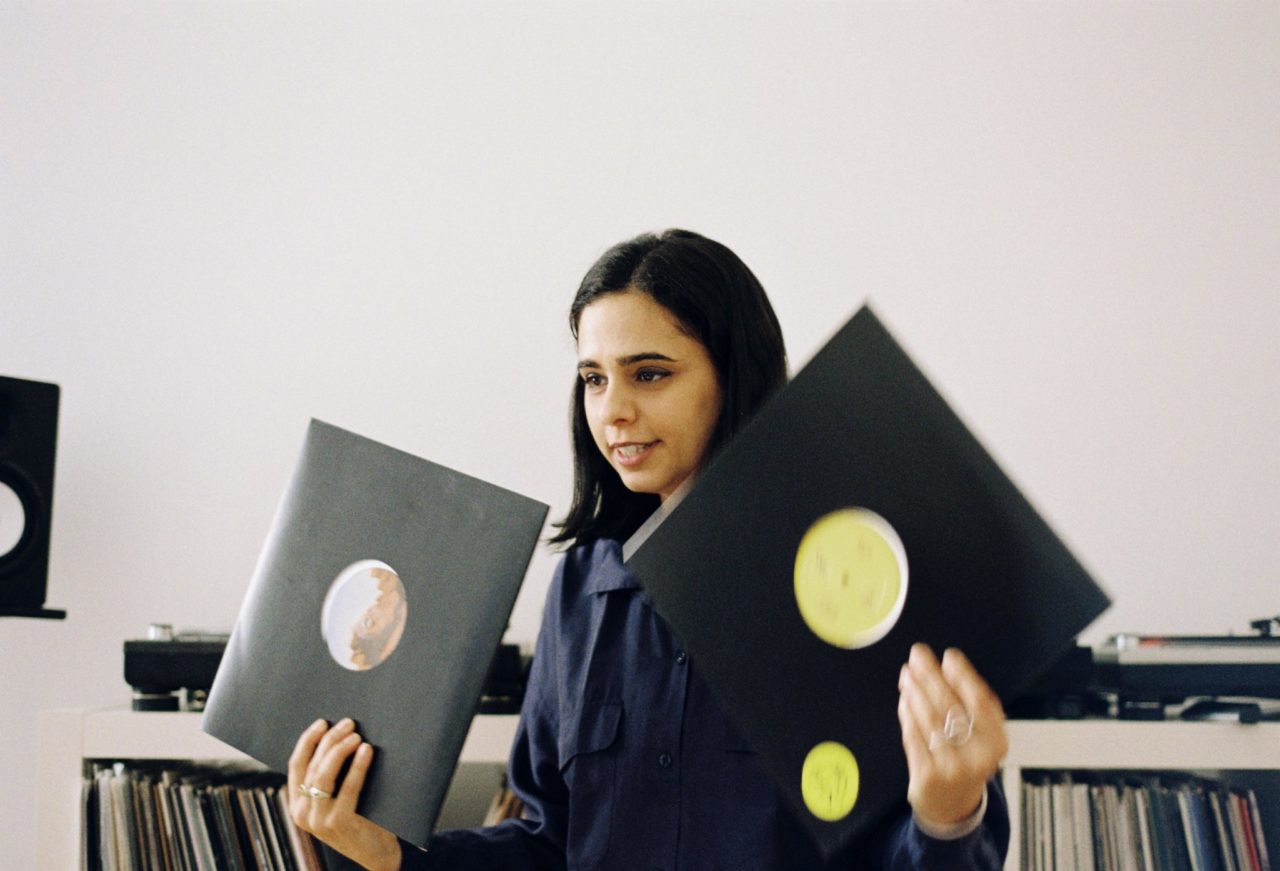