“We’ve broken the silence”. Maverick sound artist, conceptual heavyweight and experimental DJ Christian Marclay has never been afraid to be loud. From pioneering a disruptive form of turntablism as part of NYC’s downtown scene in the ’70s and ’80s to capturing the world’s attention with his timeless a/v collage The Clock, Marclay has always thrived on performance and improvisation.

Taking over London’s White Cube gallery for three months earlier this year, he created a productive, experimental environment that facilitated that same passion for disruption. Artists and musicians were invited to perform improvised works in the gallery space in response to the exhibition, with London Sinfonietta on hand to interpret their radical scores. The VF Press was installed in the space to press those performances live in the space, and Coriander Press were invited to realise Marclay’s designs on hundreds and hundreds of record sleeves a week.

More than a static gallery, White Cube was transformed into a hub of activity, production and collaboration that really did break the silence. In the words of Steve Beresford “I think that really redefines what an exhibition is”.

Speaking with Marclay and the project’s key collaborators, including Sonic Youth’s Thurston Moore, Mica Levi fresh from her BAFTA winning score to Jonathan Glazer’s Under The Skin, experimental saxophonist John Butcher and pioneering improvisor Steve Beresford, this film captures the essence of creativity and verve than coursed through the show.

Special thanks to Jon Lowe at White Cube for providing extra footage without which this film would not have been possible. 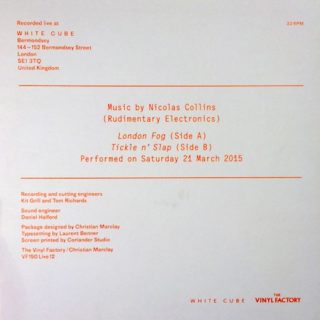