Capturing the elusive essence of no wave in 10 records 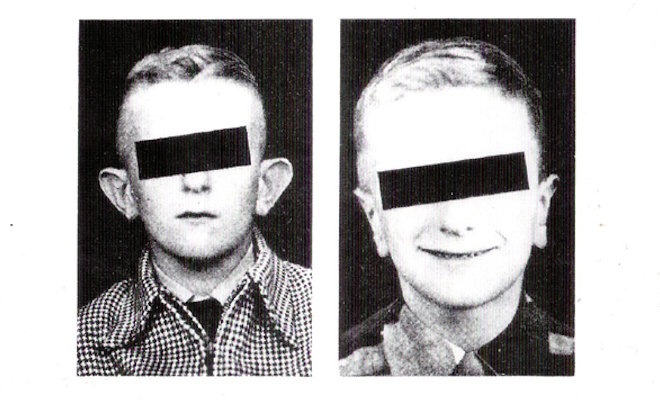 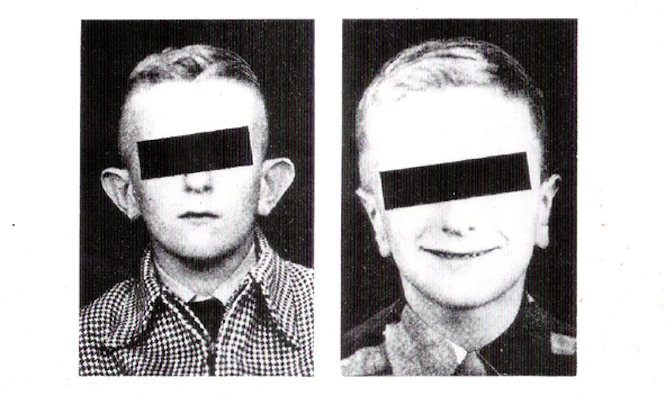 Born in the lofts and bedsits of downtown New York City and committed to tearing down convention in the rift between sound, music and art, no wave has become something of a musical metaphor, abstracted from a recognisable canon by its elusive, anarchic quality.

With just enough committed to tape to patch together a narrative from retrospective collections and rare private releases, Nick Soulsby dives into the void to extract the essence of a genre a scene that only self-ID’ed with the word ‘no’.

No wave is more often used as a musical metaphor, even a cliché, than actively listened to on vinyl let alone revived by the latest rank of hot young things. Sometimes it seems that to be labeled no wave a group’s name just needed to appear on a handmade flyer glued to a dirt-streaked wall in mid-to-late Seventies New York. How does one define a scene that only self-ID’ed with the word ‘no’?

The first unifier was a refusal to simply ‘sing’ a conventional melody; whoops, monotones, farmyard sounds – word form was either absent or wrung to within an inch of its life. Secondly, reduction was the instinct binding the art world of minimalist composition to the roughnecks inhabiting loft-spaces and squats. Within those two boundaries a breath-taking range of approaches occurred; an embrace of the amateurish, the untutored; rhythm prioritized uber alles; unconventional instrumental techniques; traditional song forms stripped to vestigial barrages; the evasion of verse-chorus-verse structure; an expansion across film and theatre not just music.

The patronage of Brian Eno, the star-wattage of Debbie Harry or Patti Smith, it all helped ensure some part of no wave’s utterances made it to tape and that it can be appreciated today as a highly-concentrated outpouring of widely disparate ideas. If you want to bleed your musical mind into new moulds, here are ten fine places to start.

Listen to all ten record in this playlist or hear them individually as you scroll. 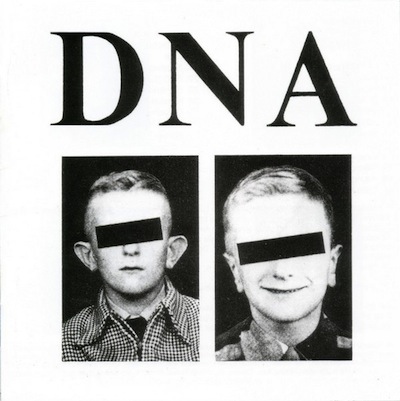 The scene’s most crucial band and exemplifier of the intelligent humour that underpinned much of no wave. This compilation has songs entitled ‘New Fast’, ‘New New’, Newest Fastest’, ‘Brand New’ – a running joke indicating titles were just one more convention to be interrogated. Often elements of these (usually) sub-two minute songs are so different that it makes a mockery of pinning a title to them at all let alone trying to parse the release into distinct utterances.

Barring the switch from a keyboardist to a bassist, the band’s inimitable template stays true to some combination of brief bass motifs or short runs of keyboard notes underpinning frill-free galloping drums and a guitar being scrunched or scratched. There’s a lot of space in the recording, enough to really appreciate the perfectly controlled vocal utterances which, even with a lyrics sheet, usually defy audible understanding. 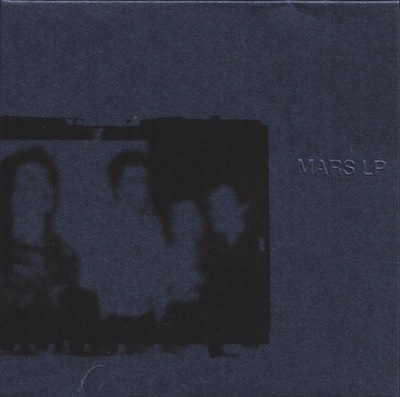 Until this reissue, the best source for the works of Mars had been smudged and muddied when the masters were caught in a flood. It didn’t matter, obscurity became them and the band retained its power even in submersion. This still sounds a million times better.

There’s a clear progression from the band’s first single – ‘3E/11,000 Volts’ – where they come closest to ragged rock, on to the impressionistic utterances of a song like ‘Hair Waves’ – where there’s not a single instrument still leaning on the crutch of rock music for support – on to the band’s final EP, recorded live to two track, where they’ve moved completely into the abstract.

The band’s guitar technique opts for stretches and slides to warp the timing of each song all out of shape while the lyrics always retain a literary or intellectual provocation even as words slip into irrelevance. 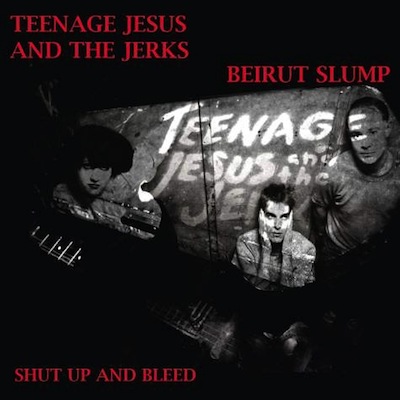 The words ‘teenage poetry’ are usually sufficient to set off panic in any discerning audience. In this more lyrically-orientated no wave outfit, however, the words came from the vicious, scurrilous mouth of teenage runaway Lydia Lunch.

Brooking no opposition she corrals the instruments to beat out a rhythm lending emphasis on her every syllable. Her self-taught slide guitar work melts notes along the guitar neck or slices them direct into the wood – an awesomely discordant barrage conducted with perfect timing. Her words and music tilt out into a realm of bewildered emotion and tangible pain. ‘Orphans’ is so beautiful you’ll be singing it in your head using the voices you hear but don’t show in your day-to-day.

This compilation also features the smattering of recordings made by side-project, Beirut Slump, with Bobby Berkowitz singing lyrics he claims (believably) to have taken from vagrants. 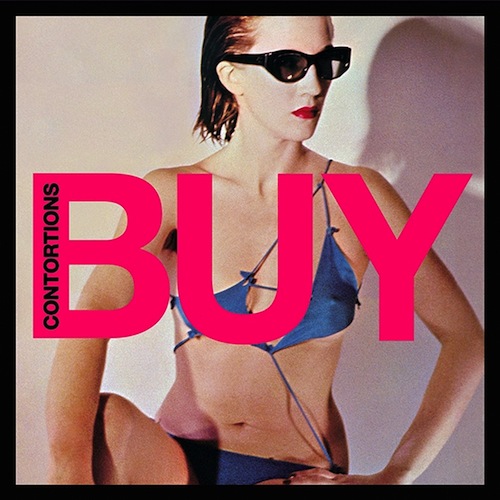 It’s intriguing placing these two iterations of James Chance’s first outfit, originally ‘the Contortions’ alongside one another. On Buy (recently reissued on Futurismo) spiralling saxophone romps around the pings and ricochets of bend strings and vamping keyboards. The sneer remains intact, the curled upper lip and off-kilter edge…But the core seems more expressly rooted in disco and jazz – the production job makes it seem an almost respectable funk jam. Almost. The ‘No New York’ has really been superseded by later band-specific compilations.

For better or worse, however, it’s that compilation which butterfly-pinned four bands – DNA, Teenage Jesus, the Contortions, Mars – to permanent status as the heart of no wave to the exclusion of other outfits. It’s impossible though to deny that each of these bands deserved to be on the landmark recording of that New York moment. 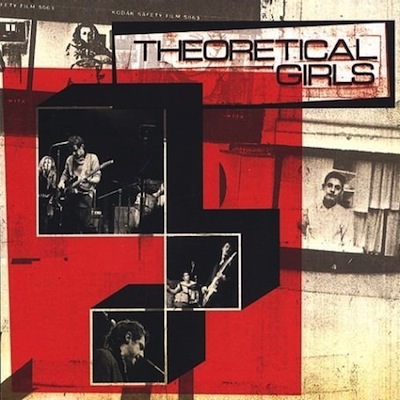 A band straddling ages and spheres, Theoretical Girls featured both Wharton Tiers – who went onto be a major alternative era producer – plus guitar composer Glenn Branca who became the clearest bridge between the art and punk worlds with this, his outfit The Static and his famed guitar orchestras.

Theoretical Girls stomp along at high tempo often defaulting to coconut shell hoofs territory. The band’s theme song takes the Ramones’ ‘1, 2, 3, 4’ intro and elevates it to become the raison d’etre of the entire song; why have more? The A-side of the only single released in the band’s lifetime is the uncharacteristically keyboard-heavy ‘U.S. Millie’. The rest of the compilation resets the balance with a fun selection of previously garage rock demos, live howls and electronic freak-outs.

Even a relatively well-provisioned troupe like TG didn’t have many means of getting music out back in the days of Times Square desiccation. 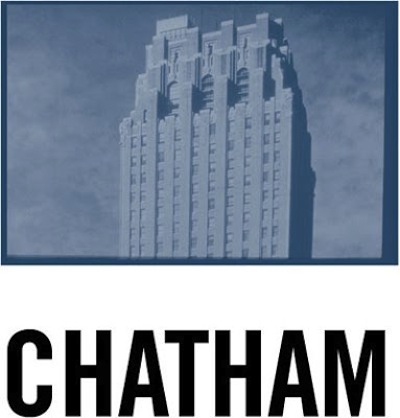 Rhys Chatham
An Angel Moves Too Fast to See
(Table Of The Elements, 2002)

A gargantuan box set but well worth the time in order to appreciate the journey Rhys Chatham made between the New York classical scene and the downtown rock arena. He would later claim Glenn Branca stole his shtick with the guitar orchestra performances but, to be fair, there were a lot of people sharing inspiration and what is music about if not sharing?

In an exercise like ‘Two Gongs’ – where said instruments shimmy for the best part of an hour – there are clear comparisons to no wave’s stripping of excess. The glory lies in how the removal of wider structure in each case made what remained sound so extreme, so excessively stark.

‘Guitar Trio’ meanwhile is a near infinitely pliable conceit in which very precise playing (see the four page ‘how-to’ notes on Rhys’ website) at high volume creates overtones which are affected by factors like the ambience of the room meaning there’s no end of unforeseen deviations to the sound. 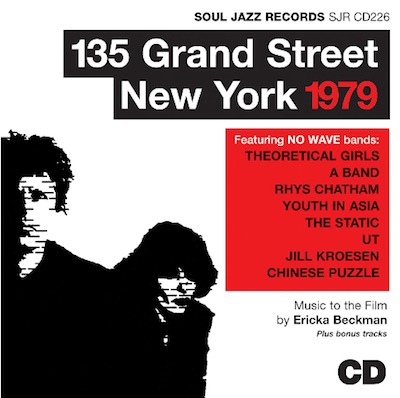 Video footage (and an accompanying soundtrack) documenting performances in a downtown loft in 1979. It’s quite a selection ranging from A Band’s prototype college rock, through Chinese Puzzle’s angular, chiming ‘Great Wall of Prague.’ My personal favourite is ‘Gay Girl in a Gay Bar’ by Morales, off-kilter underpinnings beneath a deadpan recounting of late night chat-up talk.

In a world of well-choreographed band nights and playlists pushed by data-maps (listen to this, it sounds like what you’ve heard before and identikit people who look just like you like it too so you’ll always fit in) it’s great to hear the extremes coexisting all in one place and time.

The unifying element is the untuned, ragged edge that reminds constantly that you’re listening to someone’s house party in a poor neighbourhood thirty-five years back. Though it’ll either appeal or antagonise either way it’ll school you in what a night on the wild side of town looked like once-upon-a-while. 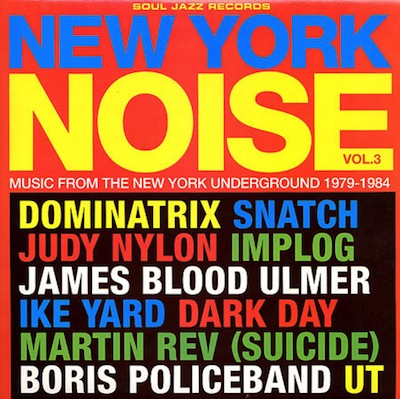 No wave is made for compilations given so few bands reached the summit where full blown album sessions were a possibility. While the Atavistic label took the lead in publicising this under-documented scene, Soul Jazz has been drawing together the bands who left barely a few cuts behind.

It’s an eclectic blend and fair to say that this series is more a summation of the full sprawl of avant-garde NYC across roughly a decade rather than no wave in any strictest sense. Stalwart performers such as Boris Policeband – a gentleman who kept a scanner lashed to his body and would recount police chatter while accompanying himself – rub shoulders with father figures like Martin Rev of Suicide – all standing alongside lesser-known figures like Judy Nylon who were a powerful part of the supportive, creative environment in which people were willing to be crowd one night, player the next. This is about community, people coming together at a time and place to make something happen. 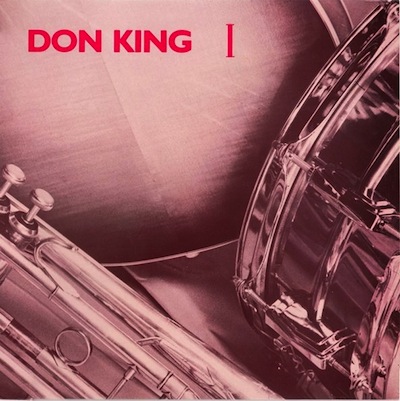 Showcasing an interest in tribal percussion styles and swooning trumpets, Don King are an overlooked element of the late-era scene. Two former members of Mars joined by various friends, shifting the sound in a fresh direction while maintaining the previous band’s aversion to using the English language when it comes to oral interventions.

The band arrived at the same moment as Sonic Youth and Swans and persisted to the end of the Eighties. There’s an air of Miles Davis’ Kind of Blue hanging in the air throughout, a new direction for the more experienced players in the scene to proceed with. As with punk, the bright flash of no wave’s explosion distracts from the rapidity with which most of its players moved on from its limitations to pursue a wider musical palette. 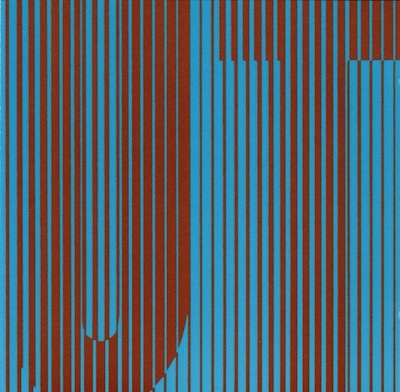 The female presence in no wave was never a sidebar; barely a band stepped out in a standard-issue ‘guys/guitars’ set-up. A slightly rarer proposition was an all-girl outfit but then, Ut were an exceptional band. They really came into their own as the survivors of the original scene, the torch-bearers who took the original discordancy and aggressive attack onward to the next generation.

The band departed New York circa 1981 to resume activities in the U.K. with a first full album (barring a couple of live offerings) not arriving until the late Eighties. They rubbed shoulders with numerous alumni and successors of both punk and no wave without ever breaking through – a fate shared by the entire no wave scene ultimately, a talismanic ur-text referenced or referred to rather than a model pursued as a revolution in music.

Watch these mesmerising embroidered zoetropes being played on turntables