It may defy conventional wisdom somewhat to task a sculptor with designing a 2D record sleeve, but for Yeasayer, it was an important part of the process in bringing their new album Amen & Goodbye to life.

A major influence on the band, the New York-based Canadian artist David Altmejd was enlisted to create a set-piece tableaux of characters that feature on Yeasayer’s albums, mirroring the transcendental, warped spirituality of the music the way that Dutch painter Hieronymus Bosch captured the hedonistic, often debased complexities of God-fearing medieval communities.

“For me what’s very important is that the image offers enough visually for people to be really absorbed in the observation of details”, Altmejd has said of the record sleeve, which features an extraordinary cast that includes Moloch, an ancient god of child sacrifice, a silent movie starlet, a breastfeeding mother and even Mark Twain. All are realised and assembled in a single scene by a living world of sculptures, actors and digital images.

With Amen & Goodbye out now on double gatefold vinyl via Mute, we spoke to David Altmejd about assembling the sleeve and making the transition from 3D to 2D and back again.

How did the collaboration with Yeasayer come about and how closely did you work with the band?

They liked my work and got in touch with me through my gallery. We had a few meetings to help define the concept. Then they came to visit me a few times, as I was working on the sculptures and on the set, to exchange ideas.

How different was the objective in creating an image for a record sleeve in contrast to your work as a sculptor? Thinking in terms of a flat image must have been a different challenge?

Actually quite similar, because I was not focused on the potential image but rather on the physical and spatial aspects of the sculptures and the set. I wanted to offer a physical landscape and let the band shoot whatever detail they thought was interesting. They decided to go for the full landscape shot, which is cool because it showcases all the work.

How important was hearing the record first in assembling the tableaux? Themes of spiritual and psychedelic transcendence seem to mirror the music in a more visual way…

Yes, and a special kind of energy, and a playfulness in the process of making forms.

The band have described it as “Sgt Pepper meets Hieronymus Bosch meets Dali meets PeeWee’s Playhouse” – Do any of these influences resonate more with you?

Because of the concept, I couldn’t avoid the Sgt. Pepper reference. I was trying to push it towards a Bosch kind of landscape, with tons of details. I hadn’t thought of Dali, but it’s interesting to think of the cover as a landscape that is forming itself from the inside. 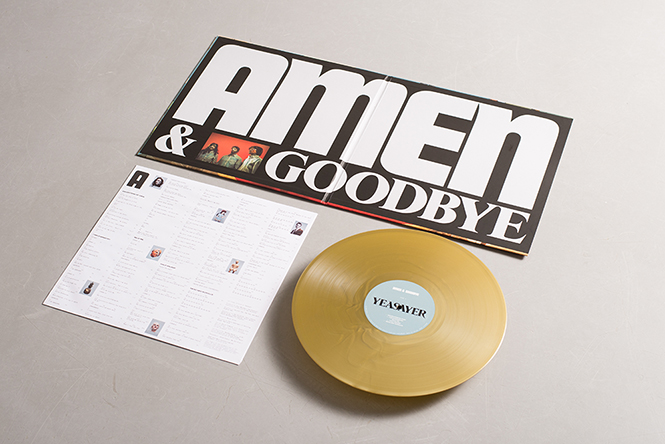 The image contains a series of burlesque, twisted characters – who are they and what do they represent?

The concept was to draw a list of characters that are made reference to in Yeasayer’s albums. We came up with a list of about 30: from Mark Twain, to Griselda Blanco, to Seth…

Some of them ended up being sculptures, others as cut out prints, others performed by actors. The idea was to populate the cover with beings that came from the music itself.

Of course, as I worked on the sculptures, I decided to add other characters that came from the real world & the news. And then there are the sculptures of the band members, as crystalizing zombies.

Yeasayer’s Amen & Goodbye is out now on Mute records.