Bang & Works: How Planet Mu introduced footwork to the world 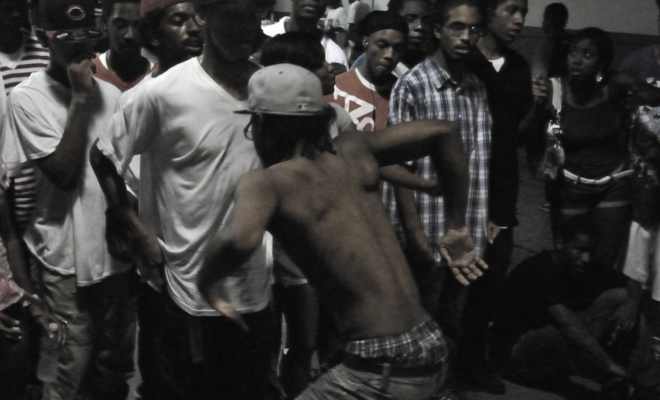 Ahead of its release, Rory Gibb takes a closer look at how Mike Paradinas’ London-based label became entangled with Chicago’s footwork community, painting a broad picture of the scene through its trail-blazing compilations and releases.

The piece that follows is an extract from the book that accompanies the forthcoming release.

Krakow, Poland, October 2011. The heat hits you in the face as you descend the bare concrete stairway into the building’s foundations. Mingling steam with scents of fresh sweat, endorphins and alcohol, it’s an abrupt transition from the autumn chill swirling through the main upstairs concourse. The sound follows immediately afterwards. You catch the low-end first, a fast-paced and staccato sub-low rumble that judders from the floor into legs and gut, setting nerves on edge, itchily compelling your body to action. The trebles hit next – terse snares that jab at the solar plexus, chattering hi-hats, soul samples smashed like glass or moulded like putty. You turn the corner to find DJ Rashad and DJ Spinn holding court, laughing and smiling in the booth as they preside over a roomful of people collectively losing their shit.

The music the duo are playing is remarkable enough, blending arrow-straight four-to-the-floor juke with splintered footwork tracks that shatter the momentum and send beat shrapnel ricocheting off the bare walls. Next to the machinic heartbeat of house or techno, the groove feels sentient; even within a single track it’s malleable and prone to power surges that spit electricity like a severed cable. Perhaps even more striking is the crowd’s reaction. It’s only a year since Planet Mu began re-leasing Chicago footwork records and in turn introducing the genre to a global audience. Very few of the scene’s core DJs had previously been able to tour beyond their home city, so in Europe it remained something of an unknown quantity. The centrifugal rhythmic force that lent footwork its initial thrill of unfamiliarity often made it tough to imagine how you could dance to this radical descendent of ghetto house – at the very least it sounded like you’d need to sprout an extra pair or two of limbs to do it justice.

On the contrary, experiencing footwork on a high volume soundsystem feels like a key being turned in a lock. Its nagging dissonances and mangled voices, the way multiple rhythms often seem to act in opposition to one another, are revealed as precision-tooled devices to flood your body with adrenaline. The staggered vocal samples of Rashad’s ‘It’z Not Rite’, one of the highlights of Mu’s recently released Bangs & Works compilation, send ripples across the packed floor. At its most abstract and maddeningly soulful – Rashad’s ‘Ghost’, where Diana Ross’s sampled voice oozes out of sync from a sucker-punch sub-bass backbone – the effect is both emotional and exquisitely tactile, like having several sets of fingers raked across your skin, momentarily blurring your sensory and motor responses. But then, just as quickly, a sudden plunge into heady, sparkling romance – Spinn’s ‘Feelin’ You’, flipping an Alicia Keys sample into a silken foursquare groove that effortlessly sweeps you up in its slipstream. The crowd’s euphoria is clearly shared by Rashad and Spinn, who seem overjoyed to be taking their music to appreciative people beyond their home city. The whole experience feels like a massive feedback loop between DJs and dancefloor, and on exiting the basement some two hours later I can’t see a single person not wearing a dazed smile.

Discussing Chicago footwork in terms of its visceral impact is crucial. More even than most dance genres it is an embodied form of music, sharpened and twisted to rhythmic abstraction to meet the demands of local dancers for frenetic beats to cut moves to. “Vacant warehouses, karate gyms, and YouTube are the outlets to find DJs providing the soundtrack for combatants batting with their legs rather than their hands,” wrote journalist and scene documentarian Dave Quam in the liner notes for Planet Mu’s Bangs & Works Vol. 1, the compilation that was footwork’s first major conduit to the rest of the world. “It’s the darker side of house dancing; hyper localised.”

For those living outside of Chicago’s south and west side neighbourhoods, it was watching footwork dance battle videos on the internet that offered an initial window into this long-running culture. They’re mesmerising, showing competitive dancers squaring off against one another with move- ments that switch from confrontational to balletic in a heartbeat. As suggested by the name ‘footwork’ – which refers to both dance and music, reflecting their symbiotic relationship – the majority of the action takes place below waist level, with legs knitting around one another in snakelike patterns before switching to bouts of frantic quickstep during which competitors’ feet move so fast they blur together. But these movements extend upward to command dancers’ entire bodies. Every muscle is spurred into action by the DJ’s selections, which similarly derive their power from dramatic contrasts in tone; mellow to tripped-out to militaristic.

“You can’t have the dance without the DJs, and you can’t have the DJs without the dance, other- wise you just don’t get it,” emphasises Litebulb, dancer and co-founder of footwork dance troupe The Era. “The basslines, the hi-hats, the sample, or the sound in the background – there are however many elements in the track that you can just lose yourself in. It’s almost like a pulse, it just gives you this feeling. It makes you feel good a lot of the time, or it can bring out whatever emotion you’re in, or put you in a different vibe for the night or the morning. When you feel the pulse of the speakers, the vibrations, and you see the dance, it takes you somewhere else sometimes.”

The roots of footwork reach deep into the lineage of African-American music to encompass soul, funk, disco, hip-hop and house. But the evolutionary arms race between DJ/producers and dancers that drove its emergence as a distinct style began in the 1990s, at parties in the housing projects of Chicago’s south and west sides. Ghetto house, spearheaded by the Dance Mania label, had grown out of the city’s early pioneering house sound. Upping the tempo and stripping embellishments to leave unrelentingly funky, gritty club records, producers like DJ Funk, DJ Milton and DJ Deeon layered their beats with sexually-charged slang and call-and-response vocal chat – exhortations to the dancefloor, to heighten the mood in the room and keep the party moving at pace. These beats in turn shifted towards the even faster style known as juke, defined by piledriving four-to-the-floor kicks at up to a frantic 160bpm.

Competitive house dancing, which had originated with the early 1980s genesis of house music, was feeding off these stylistic shifts. One of the architects of footwork, DJ and producer Kavain Space, aka RP Boo, was then a dancer, DJ and member of Ronnie Sloan’s highly respected House-O-Matics dance clique. He remembers DJing at parties where, scattered among the crowd, groups of competitive dancers would stake out space on the floor. “As certain tracks were being played, you’d see circles forming up. Inside those circles you’d find people from certain groups, cliques – they’re having a nice time, they’re not arguing, [but they’re] saying ‘I can beat you! I’m better than you! Ok, watch this move, watch this move!’” Space recalls how, watching these crews battling one another, DJs in turn would respond by further upping the ante. Records were sped up from 33 to 45rpm and played alongside increasingly fast and fiendish beats, in part to keep pace, and in part to challenge dancers to work even harder. Watching these “soon-to-be-footwork” dancers hone their moves, he says, “made me want to go home and make more tracks.”

It was one such beat written by Space that catalysed footwork music as a distinct entity. 1998’s ‘Baby Come On’ is widely acknowledged as the genre’s first track proper. With house’s customary 4/4 kickdrum skeleton replaced by a hypnotic, ultra-minimal percolation of tuned toms and gibbering chants, it prised open acres of space within the groove and left increasing wiggle room for interpretation by dancers. Crucially, the reaction in clubs was wild, just as it was to Space’s 1999 tune ’11-47-99’ (also known as ‘The Godzilla Track’), released on Dance Mania but miscredited to his contemporary DJ Slugo. These early RP beats, gathered on Mu’s Classics Vol. 1 retrospective 12”, laid the foundations for footwork as a genre. They also already possessed many characteristics that have continued to define RP’s own music – pulpy film samples, multidirectional drums, and voices stretched like tripwires to snag at careless ankles. “I’m going to use the sample, and we’re gonna talk together, cause we’re telling you a story,” Space explains.

Laced with his own cryptic vocals and chopped out on his signature Roland R70 drum machine, Boo’s potently psychoactive tracks are like riddles posed to unsuspecting bodies. His 2013 Mu debut Legacy gathers much of his work from across the years, from ‘Steamidity’’s muttered warnings that “I can see the smoke comin’”, to his cries of “See me burnin’ the floor!” on ‘No Return’. He sounds like he’s laying down the gauntlet for dancers, I suggest, taunting them into action. “That’s it!” he nods. “You’re challenging them! If two people battling each other catch it, it makes the battle more intense,” he breathes, slowing his words for emphasis. “It’s all about how you’re going to make yourself fit with this track, against this [other] person. That’s why I called that track ‘The Opponents’ – “You can’t bang. What you gonna do? You can’t bang. Face it, face it! Completely wack!””

RP Boo’s increasingly competitive music reflected footwork’s shift from club settings towards the gyms, community centres and warehouses where dance cliques would face off against one an- other. Rashad and Spinn were school friends who started off as both DJs and dancers, and like Boo had been members of House-O-Matics. The three met through parties on the west and south sides, where they also encountered fellow footwork innovators and Dance Mania alumni Traxman and DJ Clent (whose haunting ‘3rd Wurle’ was another key proto-footwork track). With DJs and producers increasingly honing their music for dance circles, a distinct self-contained community and sound formed throughout the first decade of the millennium around events such as Battle Groundz and War Zone, bound by this tight mutualistic relationship between form and function.

“The dancers and DJs always hung together, that’s how most of the music gets made,” explains Litebulb. “A lot of the DJs were dancers themselves, the pioneers, the prominent ones like Spinn, Rashad, Boo, Gant-Man. They used to be at parties and would see the circles, and would make the music based off what they saw. So it spun like that. From there we’d always be with the DJs, and they’d make tracks based on what we like to dance to.” DJ Rashad’s ‘Ghost’ makes that connection explicit when it shouts out several of the city’s most respected dancers above sparring snares: “Poo, AG, Q, Litebulb”. “Some of the best tracks, we were in the room when they made them,” marvels Litebulb. “It adds to the collaborative feel. It makes it feel like, not only did he make it, but we all made it.” 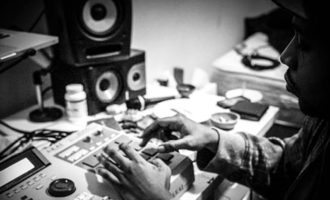 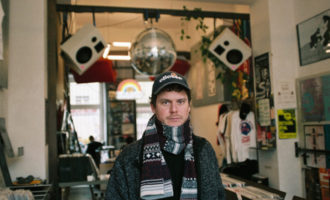