Armando Iannucci on classical music, The Death of Stalin, and soundtracking comedy

One of the great satirical writers and directors of recent times and a crucial voice in the post-Trump era, Armando Iannucci turned his attention to a very different tyrant in most recent film The Death Of Stalin. Drawing on his passion for classical music, he and composer Christopher Willis explain how they channelled the ghost of Shostakovich to craft the film’s unsettling ambience.

On January 28, 1936 an article titled ‘Muddle Instead of Music: On the Opera Lady Macbeth of the Mtsensk District’ was published in the Russian broadsheet Pravda, formerly the official newspaper of the Soviet Union. Almost immediately, it was believed that the article was written by Stalin himself. “He ignored the demand of Soviet culture that all coarseness and savagery be abolished from every corner of Soviet life,” it wrote. Decades later the opera would be described as ‘too scary for Stalin’, but at the time they were words which the opera’s composer Dmitri Shostakovich read with pale skin. Until then, Shostakovich had been Russia’s musical genius, but with his fourth symphony branded a work of bourgeois, formalist vulgarity, Shostakovich packed a suitcase and expectantly awaited a knock at the door.

“Once Shostakovich was criticised by Stalin he just stopped being played and spent two years living in fear of being taken away in the middle of the night,” says writer and director Armando Iannucci. The lives of Shostakovich and many like him are stories to be told in themselves, but as portrayed in Iannucci’s latest film The Death of Stalin, his was not a unique account of life beyond the Iron Curtain, but his musical influence remains ominously present in the film’s soundtrack.

“Very early on I said to [The Death of Stalin composer] Christopher Willis, “no pressure, but I’d love it to sound like we had the Soviet Union’s top composer from the 1950s to score our movie,” says Iannucci. “It was met with a pause and an ‘….okay…’ from Chris, but that’s exactly what he did. He dug out the manuscripts and the scores of symphonies from Shostakovich, looked at them, absorbed their style, their instrumentation, the forces that they used in the orchestra and then went away and did it.”

Alan Partridge, The Thick Of It, Veep, The Day Today, Time Trumpet, a pre-empter of affordable housing in 2017, we know Armando Iannucci through the seemingly infinite amount of quotable lines which have made fictionalised national treasures of those who first spoke them. His other creative outlet lies in a different form of storytelling though, or at least a grand appreciation of one; classical music.

“I grew up sharing a room with a brother who was into David Bowie, Lou Reed and all that which was fine, but I just thought of it as noise. Then I wondered ‘what’s my noise,’” says Iannucci of his early discoveries. “But in school a teacher played ‘The Planets’ by Holst, and that was me hearing a symphony orchestra really for the first time and instantly thinking ‘that’s great, that’s my noise. I’ve found my noise.’”

The new memoir to musical adulation, Hear Me Out, is the story of Iannucci’s exploration beyond ‘The Planets’, telling how one creative appreciation has often affected the other. When trying to concentrate on directing a key scene for 2009’s In The Loop at the Royal Festival Hall, he talks of his distraction after discovering Polish pianist Krystian Zimerman practicing in another room. He remembers how a failure to conform to fads of the moment encouraged him to uncover classical works 200 years old at his former local library in Glasgow. “As a child growing up in that environment enjoying classical music is a bit odd, so it’s something that you kept to yourself,” he admits.

Now that his affection for George Frideric Handel or Beethoven is public knowledge, Iannucci’s appreciation for classical stretches beyond just the music itself. “It’s strange. In The Thick Of It, because of the nature of the series, we didn’t use music, but I actually like working with music. Music is a part of the drama, and yet it always amazes me that it’s the bit that’s stuck on at the end.”

“I see opera and film as slightly equivalent,” he goes on to say. “Opera is not just about the music, it’s about the words, the performance, the costumes, the acting, it’s all sorts of disciplines coming together, and if one or two of those disciplines aren’t quite right it pulls the whole thing down. That’s the same with film. You spend a lot of time on the script and with the actors, you should spend time talking about the music in the same way. You have to set their tone early on in the process, rather than at the end of it.”

“From the start we wondered whether we would use classical music from the time of Stalin’s death or if it should be a combination of composers from that time and me filling in the gaps,” says the score’s composer Christopher Willis. Alongside The Death of Stalin, Iannucci and Willis previously worked together on the Emmy award winning comedy Veep, satirising two very different forms of patriotism both on-screen and in music. “But as a composer,” Willis goes on to say. “I love to study and inhabit musical styles, so the idea emerged that instead I would put myself inside the world of Russian composers like Shostakovich or Alexander Mosolov and create new music. These composers were fearing for their lives just like the rest of Russia was and they were brow beaten into writing pieces that would toe the party line, so there’s a very particular, rather grim musical sound that really evokes that era.”

The music of Russia held many iterations throughout the years of Stalin’s rule. From 1923 composers such as Nikolai Myaskovsky, Vissarion Shebalin and Alexander Mosolov formed part of the Association of Contemporary Music, an alternative and avant-garde musical collective founded by Nikolai Roslavets. Later, 1934 marked a state-fronted cultural movement that funded works that fell within the Union defined guidelines of Socialist realism (Proletarian, Typical, Realistic and Partisan), and banned those that didn’t.

These works, often composed as demonstrations of grandiosity, strength and glory, became musical characteristics in themselves. Shostakovich’s return to Soviet grace, Symphony No. 5, bellowed with brash, garish horn sections as piercing string sections hang in the air for what seems like an eternity. A grand embodiment of the regime’s strength.

“Usually in film you’d record orchestras in sections, but we wanted to mimic a huge Soviet orchestras that you’d see at the time, so we brought in a much bigger team than usual,” says Willis. “When you put musicians together like that people are encouraged to play louder, and the sheer force of the sound is likely to be greater. It’s a little more old school and a little more dangerous because you don’t have so much control afterwards, but it creates an illusion of being in that period of history.”

“The note I gave to Chris was to not make the music funny. The music shouldn’t acknowledge any of the jokes, it should a feel part of the landscape rather than something that comments on the landscape,” adds Iannucci. “We wanted the music to mimic the style which was being produced by Soviet composers at that time. It’s a bit like lighting. It shouldn’t be telling you what to feel but it should be assisting you as you feel. I also knew, because of the script, that we were going to start off with a very beautiful piece of music from Mozart, and the idea was that if we start off with a beautiful piece of music we should gradually progress to end up with something horrific…”

That ‘something horrific’ comes in ‘A Comedy Of Terrors’, the film’s ghastly crescendo that plays as the end credits roll. “There are basically two themes that I explore within the soundtrack,” tells Willis. “One I associate with [Stalin successor] Nikita Khrushchev, a theme for everyone, for Russia and the fate of the union. The other I associate with Lavrentiy Beria, and you hear those two themes overlapping, coming and going all the time.”

“There’s a certain style and manic-ness that you hear in composers from that time who would write music that they wanted to be ‘happy’ but wouldn’t come out that way,” Willis goes on to say, describing this uniquely terrifying strand of totalitarian classical music. “It might be happy for a couple of seconds but then it would begin to sound really horrific in a strange way. It goes sour very quickly, and as a composer I really had fun with that.”

The literal death of Stalin on 5th March 1953 marked a sea change in Russia’s cultural landscape. The Khrushchev Thaw – the name given to the (relative) relaxation of censorship and repression in the Soviet Union – allowed for more experimental and underground forms of music to thrive. Formerly secret works by top composers were performed for the first time, including those of Shostakovich. Shostakovich survived through his several years of fear, his later works being greater dictated through the control of Stalin’s regime than by any form of creative freedom. But for all the macabre undertones that lay within his music it tells a story Russia’s history that may have otherwise remained unheard. “There’s something about classical music that seems to say something, but at the same time literally doesn’t say anything at all,” thinks Iannucci. “That’s what I find so compelling about it.”

The Death of Stalin OST is available now. 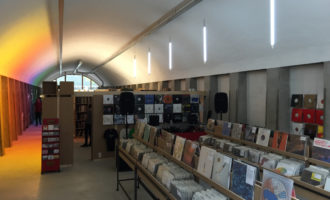 From dub to the club: The rave artwork of Junior Tomlin