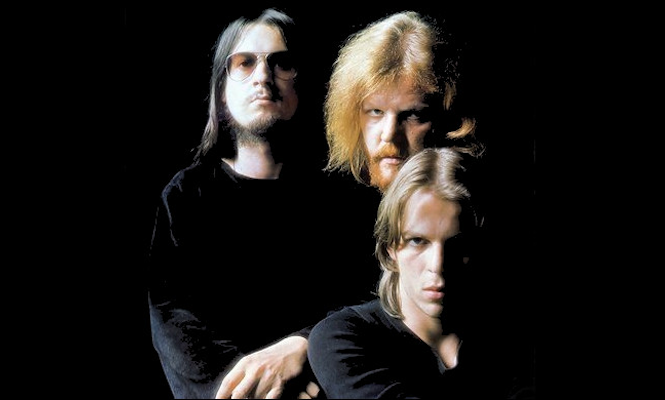 On Friday 23rd January 2015, the music world mourned the death of Edgar Froese, founding member of Tangerine Dream, a German group influential in the development of krautrock and electronic music. FACT’s Mr. Beatnick pays tribute to the group and runs down some of their key records.

Tangerine Dream came together at the famed Zodiac Free Arts Lab in Berlin, a space founded by modern artist and free thinker Conrad Schnitzler of the band Cluster. Painted in black and white, the space served to incubate a number of formative Krautrock bands of the time, notably acts like Ash Ra Tempel and Klaus Schulze.

Tangerine Dream were the house band in this otherworldly space, and had a number of rotating members over the years, with the core members being founder Edgar Froese, and collaborators Christopher Franke and Peter Baumann. A prolific group, they released a huge number of records and soundtracks throughout the ’70s and ’80s, and are synonymous with the “New Age” music genre – a notion that Edgar Froese always frowned on, and struggled to accept. Perhaps he had a point, since their music touches on a number of styles too broad to easily categorise: the chugging minimal synthesis of Kraftwerk, the space-synth explorations of Jean Michel Jarre and Vangelis, with folk and prog flourishes and baroque melodies that can be likened to bands like Gentle Giant and King Crimson.

Particularly successful during their years on the Virgin label, Tangerine Dream carved a path through the zeitgeist of the era that had been mapped out by albums like Mike Oldfield’s Tubular Bells – as unthinkable as it seems now, in the mid ’70s it was entirely possible to have a top 10 hit with an abstract, ambient choral soundscape, and no promotion campaign. Rockstar Games took the decision to commission a Tangerine Dream soundtrack for their blockbusting game Grand Theft Auto 5 last year, proving that their chugging minimalism never really left the popular consciousness – there’s just something about those celestial lead lines and gently undulating pads that trigger instant flashbacks from all your favourite ’80s films, and the band’s records have been fed to plenty of samplers over the years as a result.

There’s an awful lot of Tangerine Dream music out there to explore, but I’ve picked out a few favourites from both the band themselves and their solo efforts. Most of these can be picked up for pennies at your local charity shop – some of the best bang-for-buck space-rock on planet Earth. The album that popularised the band and went gold in seven countries despite having no radio play, Phaedra gets props for its distinctive use of the Moog modular synthesiser, sequenced by Christopher Franke to create burbling basslines, with Froese’s mellotron lines sweeping and gushy over the mix. The best parts of Phaedra are the passages where music concrète takes over, Cluster-style, with expansive sections that sound like aquatic aliens singing underwater and lonely kosmische flute lines played by Peter Baumann. Phaedra is often cited as the group’s best and most influential work.

The band in their heyday, performing their popular hit ‘Ricochet’ in the unlikely setting of Coventry Cathedral. There’s just so much to enjoy here – an opulent and grandiose spectacle, majestically trippy throughout, with gigantic Moog modulars undulating against a backdrop of candles and fledgling psychedelic video effects as religious iconography is superimposed on row upon row of gnarly synth buttons and switches. It’s tempting to say something like “more LSD please vicar” at this point, but Froese and the band were vehemently anti-drugs throughout their careers. The opening title track is one of their best known: opening with whimsical prog guitar, by the time the hissing analog drums kick in half-way through you can begin to hear the distant influence of bands like this on the Detroit techno movement. The album’s best moment is probably the closing track ‘Invisible Limits’, which forms the basis of a well-known favourite from DJ Shadow’s Endtroducing album. An expansive double album, 16 tracks spread across four sides of wax, Ages is Froese’s best solo album and most ambitious work. Some nascent elements of the record first cropped up on Tangerine Dream’s Cyclone, and the mood ranges from stripped-down synth experiments to tougher, rockier, motorik fare, with plenty of food for samplers too. Fans of albums like Vangelis’ Earth will be in heaven here – an underrated record that takes some time to get your head around. Tangerine Dream member Peter Baumann recorded a number of solo albums away from the band, of which Romance 76 is the standout. Fans of Detroit hip hop will instantly recognise the oft-sampled, hard-edged rhythm and catchy melody of ‘Phase By Phase’, and the whole album is worth investigating, a real tour de force of the new age genre. Don’t bother with the follow up albums Trans Harmonic Nights and Repeat Repeat though, unless you’re a Thomas Dolby fan. From the soundtrack to Risky Business, an entirely forgettable Tom Cruise flick. This is a charity shop staple: nestling in amongst the likes of fellow soundtrack contributors Phil Collins and Prince lies this twinkling, Balearic masterpiece ‘Love On A Real Train’, which sounds like it probably inspired the likes of Robert Miles ‘Children’. A big favourite with leftfield house DJs such as Gerd Jansen. Froese’s solo albums are not as ubiquitous as his work with the band, but are for the most part, very worthwhile: Pinnacles is an ambient, spacey work which recalls the sequenced tranquillity of Manuel Gottsching’s E2-E4. Rather like E2-E4, the title track found an unlikely home in the record boxes of cosmic DJs like Daniele Baldelli, who was fond of playing it at the wrong speed, and you can see why – aquatic trills and windswept melodies are the order of the day here, underpinned with chugging motorik drum machines. A timeless piece of electronic experimentation.

For more on Krautrock’s most influential bands, see our introduction to Can in 10 records here.