“I want my music to put people in altered states of consciousness”: Aïsha Devi’s electronic shamanism

We met the artist and founder of Danse Noire label in a café in London to find out more about her 2018 LP DNA Feelings.

Talking to Aïsha Devi is a trip. Powerful, mind-bending and sometimes puzzling, but always enlightening. In person, Aïsha is warm, purposeful and cerebral, her train of thought as layered as her music.

Aïsha is here to speak about her epic and cinematic second album, DNA Feelings, and latest video collaboration with the Chinese visual artist Tianzhuo Chen. But we end up talking about everything in between, as she moves fluidly between concepts and texts spanning continents, cultures and centuries, from which she gleans ideas that she distills into her art.

Behind this impressive ability to connect the dots is a desire to dissolute space and time, and generate a sense of belonging in her audience regardless of where they are. She comes to music as a teacher; her spacious and ethereal sound imbued with meaning and the intent to transform people through frequencies.

As Aïsha explains her plan to hijack the entertainment industry with her anti-consumerist message, it starts to feel as if she equally seized this interview to give a [much needed] crash course on all things metaphysical. 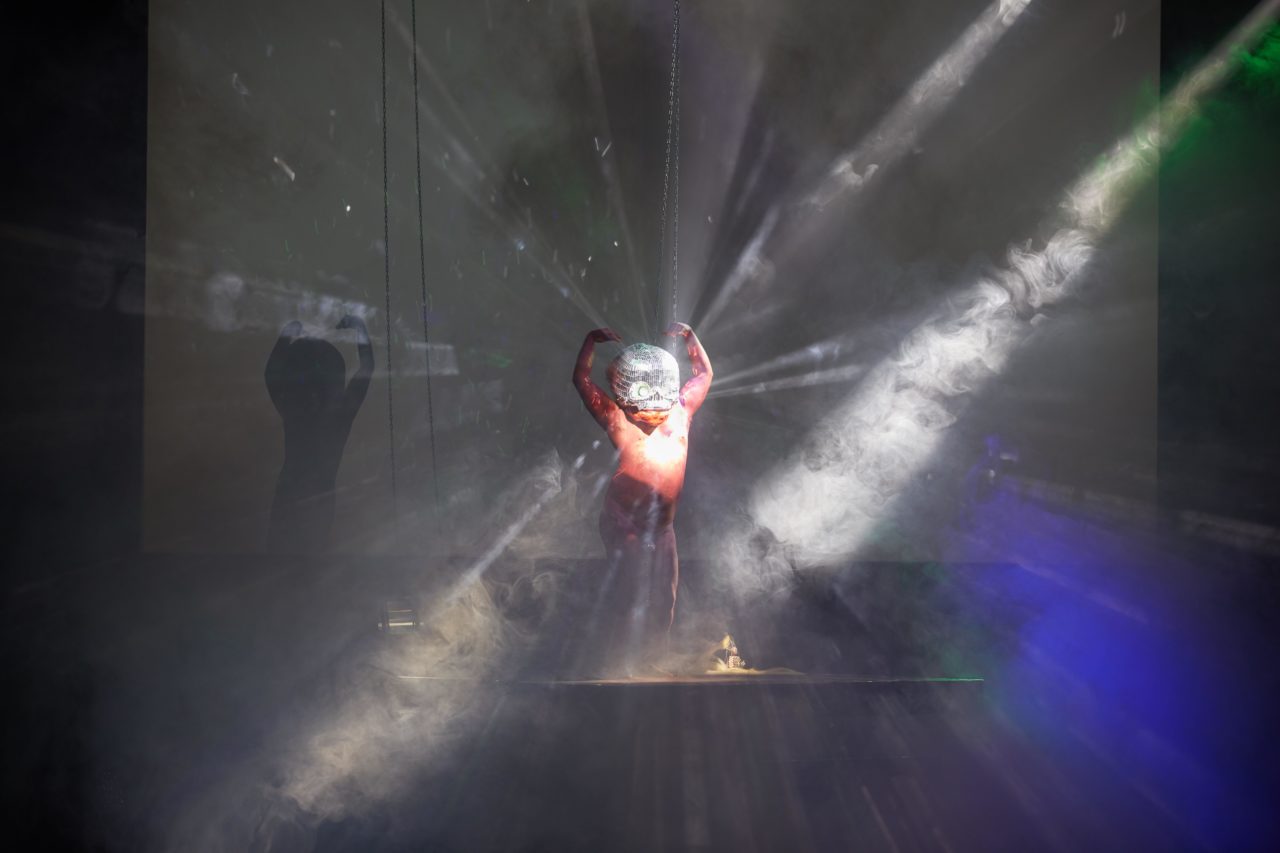 Your performance at the Barbican felt very meditative and improvised, what was the structure to it?

I am building my live show into a kind of ascending dynamic. I start my performance with a slow motion, low delta binaural sound, which activates the connection between conscious and subconscious. I increase the pitch and the speed throughout the performance to stimulate the body via shifting frequencies in a vertical elevation. I learned about the speed of acceleration and portamento by watching and listening to Tibetan monks’ rituals. They would always start in a slow cadence and a low, almost subby incantation and the meditation would end pretty quickly, morphing into high chanting.

Reproducing the chanting and learning the guttural voice technique helped me to understand how resonance and vibration effect our body; depending on their Hertz, certain frequencies impact organs, cells, the mind, and our DNA. I also learned how to extend the vocal chord’s resonance. I produce multiple oscillations and poly-harmonies that combine with the frequencies of the music and induce an altered state of consciousness. I also use beats whose low frequency kicks act as a form of a purge – the violence cleanses with a hard pulse stimuli that resets the body before any transformation. 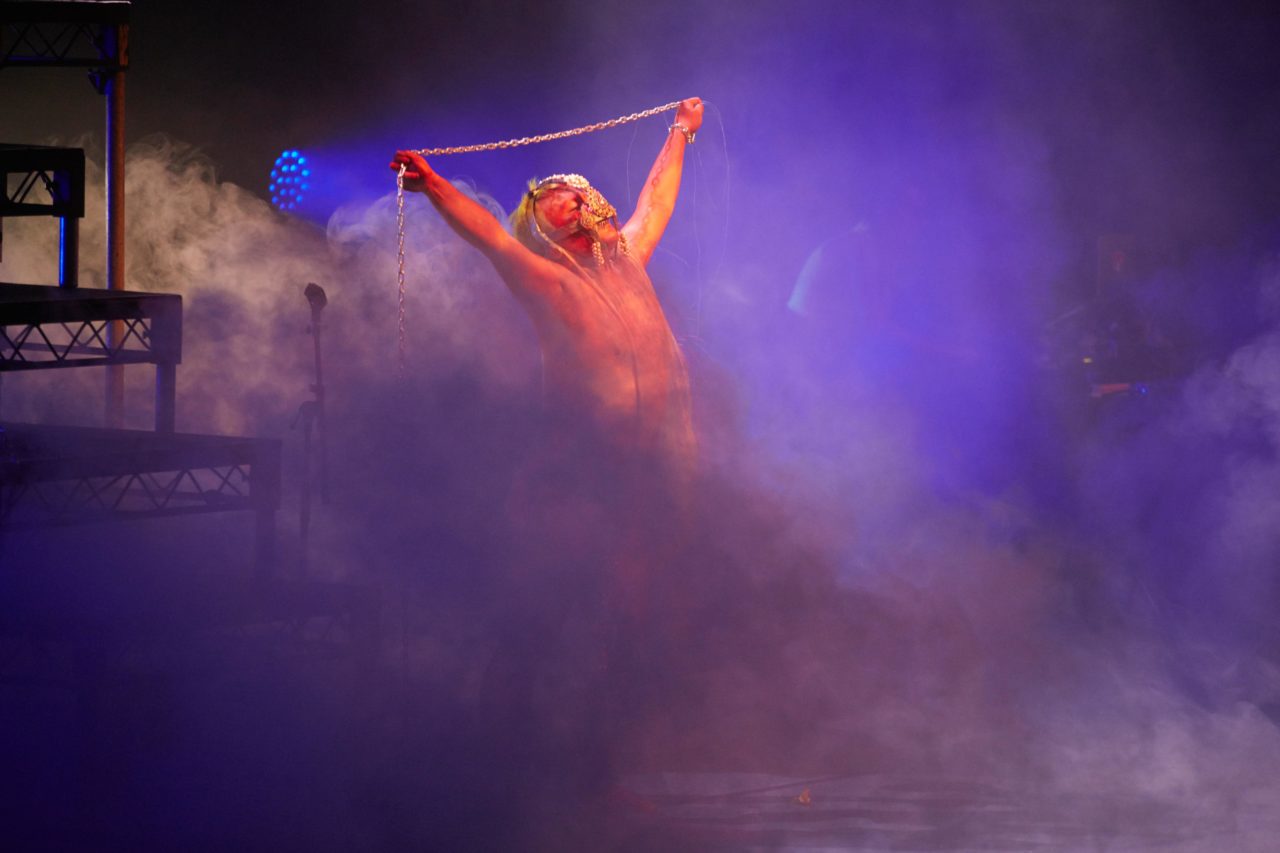 Can you tell me about your collaboration with Tianzhuo Chen?

I fell in love with his installations and visuals when I saw his first solo exhibition in Paris at the Palais de Tokyo in 2015. I instantly had the feeling we were telling the same stories through different mediums. We started working together with the ‘Mazdâ’ video, and have regularly played shows together since. I love these shows since they expand our practice into multiple forms – it’s an omni-performative experience. We learn from each other, we grow together, it’s a non ephemeral relationship, we get along like a chosen family.

What were the visual references he used in the ‘Light Luxury’ video, as well as at the Barbican?

The word luxury is etymologically coming from light (lux in Latin). My idea when I wrote ‘Light Luxury’ was to make people realise our modern materialistic society was substituting inner light or enlightenment with external visible artefacts, such as jewellery, overt opulence, over consumption… and that capitalism was the ultimate stimulation to the wrong light. 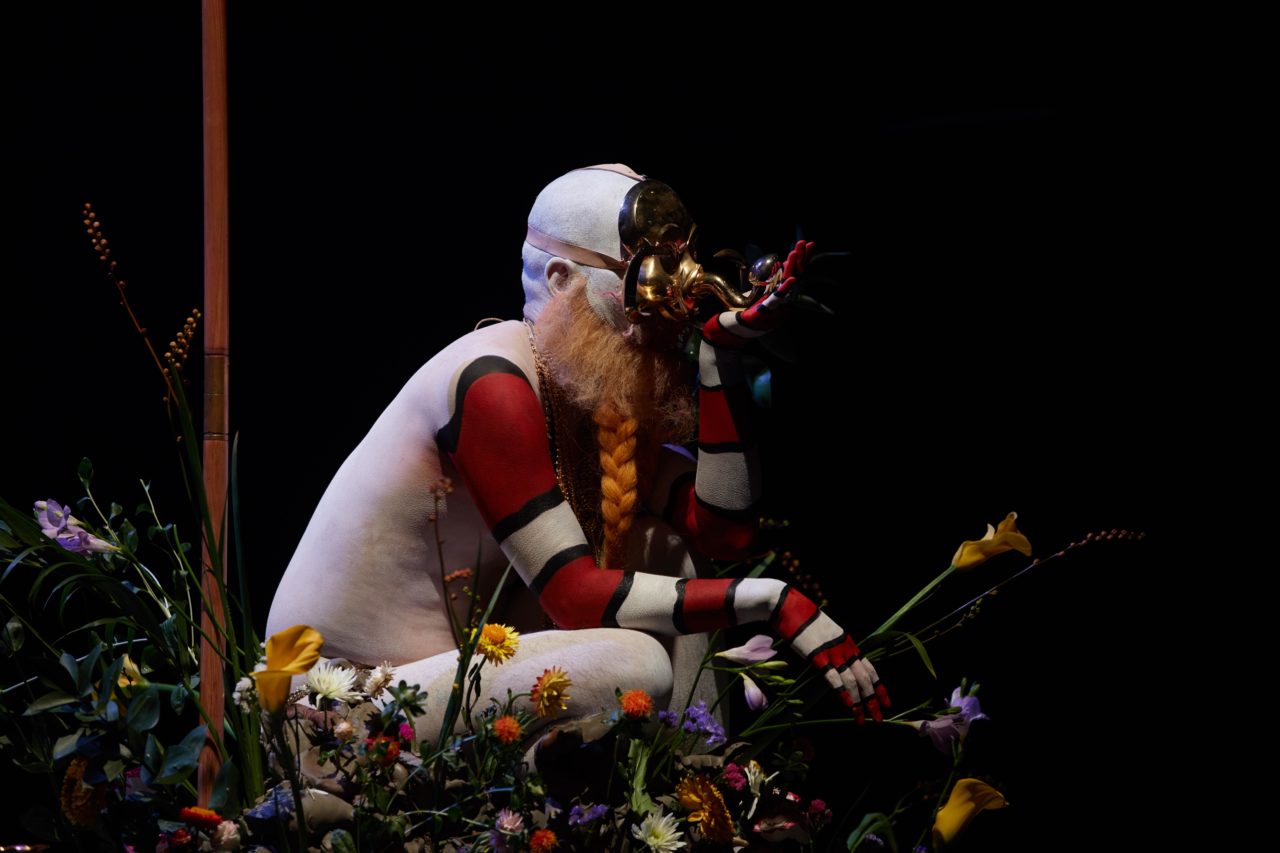 Tianzhuo transposed this idea through a mythical tale involving the Chinese nouveau riche class, a cerberus whale, a prophet and two snakes who are performing a Butoh dance. The oscillating serpents are the core of the show and are the main metaphysical aspect of my album; they represent enlightenment in Upanishad and Ayurvedic illustrations – it’s also the Hermetic Staff and the European medicine Caduceus. The two serpents also emblematise the frequency, the sound, which is a magnetic wave and an electrical wave interconnecting. The primal vibration. I associate its continuum movement to infinity and eternity – the show is therefore called “Aetherave”, the rave of eternity.

Both Tianzhuo and I are using ancient symbolism as a positive form of hypnosis on the consciousness of our audience. This ancient symbolism is the ancestor of the modern logo, a mathematical formula synthesised into a geometric form that embodies an energy and an ideology. My idea through visuals and music is to regenerate this cosmic lexicon into the context of the modern era, reinventing a comprehensible hi-fi iconography that can heal people. A DNA serpent lemniscate is the logo of my last album – it’s a contemporary alchemical ideogram. 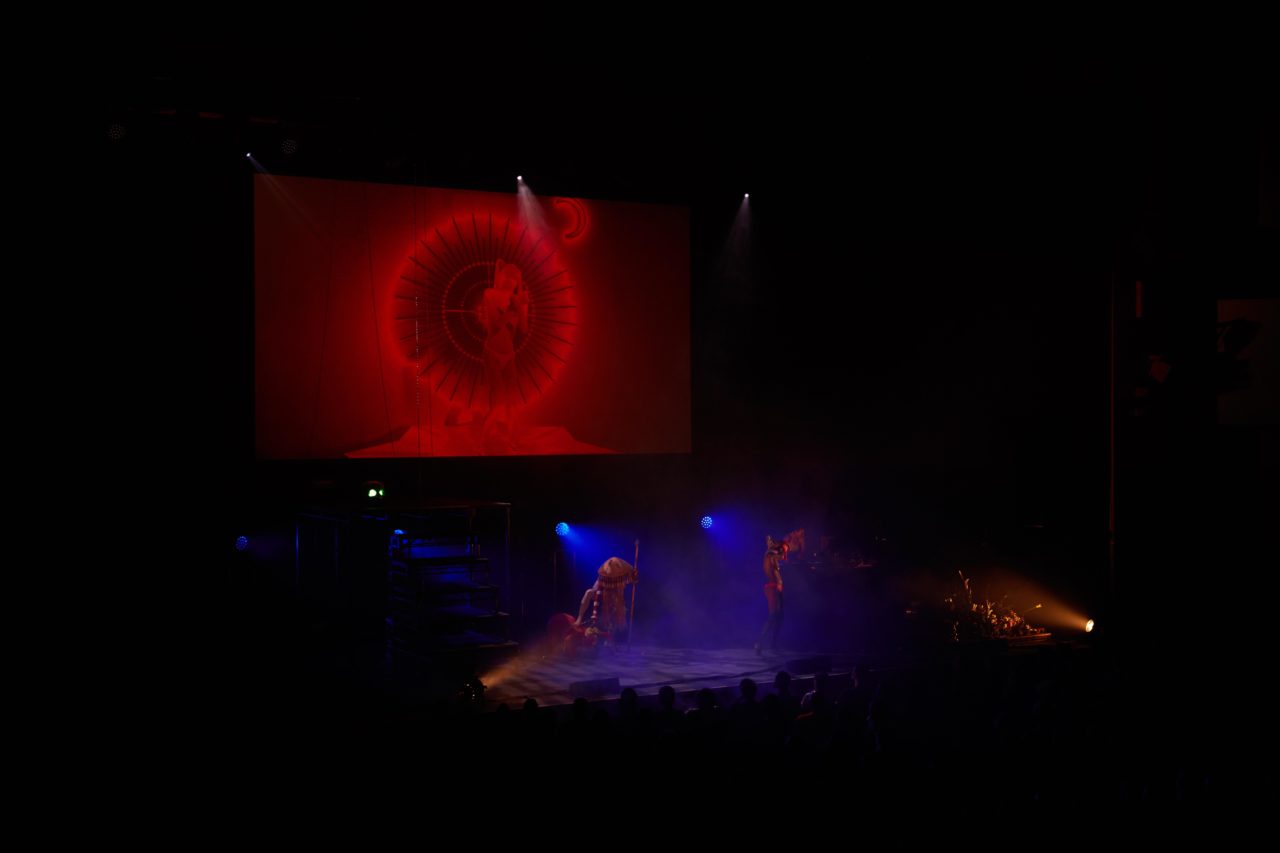 What was the process of shooting ‘Light Luxury’ with Tianzhuo like?

We shot in Shanghai, outside of the city in a thermal bath. We only had one night to film. People were sewing fabric, gluing stuff, transforming bodies into surreal shapes…it was effervescent, hectic, noisy, entrancing. It started to rain and this added to the apocalyptic atmosphere. Sunrise came, and we exited the water just before a big lamp fell into the pool.

How does DNA Feelings differ from your first album, Of Matter and Spirit?

DNA Feelings is the natural continuity of the initiatic gate I was experimenting through on Of Matter And Spirit, but while the first album was more focused on songwriting and lyricism, DNA expanded beyond my personal narrative and became intentionally metaphysical.

Meditation was already part of my creative process while producing Of Matter, but I think I really gathered more alternative multi-dimensional knowledge through my last year of practice, and this definitely determined the shape of the last album. Meditation taught me how to breathe correctly and how the quality of breath and its fluctuations are the conductors of the whole organ’s informational systems. 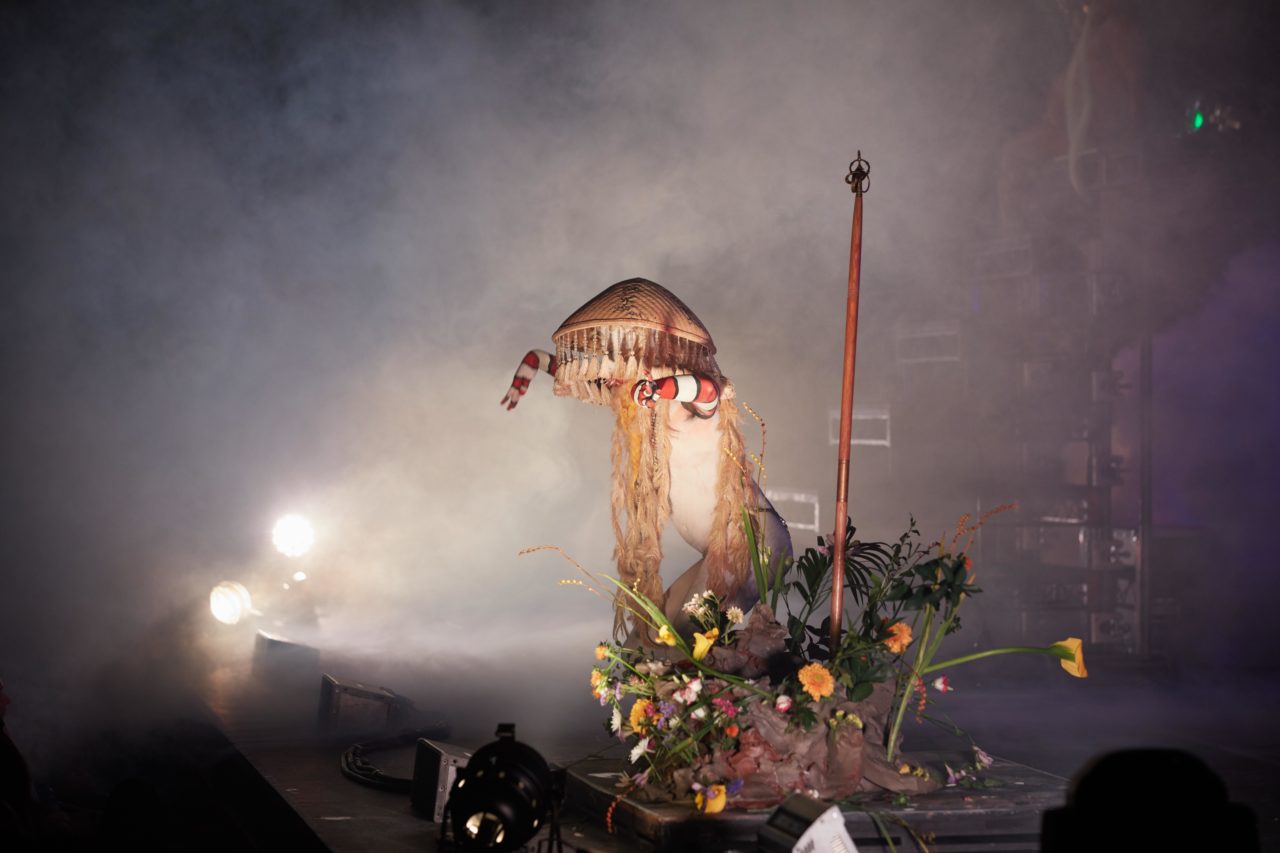 I realised that breathing was the space in music. The vital vector. As the zero point energy, space is never empty, but a sea of energy and space really does structure my tracks like an animated organiser. I gained confidence and stopped over-saturating my productions. I let the essence of an idea intrinsically speak and breathe.

In general, my harmonies aren’t diatonically scaled, just as a lot of non-Western music employs semi and quarter tones, which are a powerful mind elevator. I also utilise a lot of Kargyraa singing, untuned polyharmonics, supersaw synths, and delta and alpha binaural frequencies that generate extra brainwave activity. My whole process of creation is dedicated to generating alternative neuronal connections and inducing altered states of consciousness.

I want my music to open multi-dimensional zones, make people transcend the 3D and let them gain inner power via intentions and frequencies. I’m not creating ornamental music but subliminal music.

I’ve read you like to say your music is ‘anti-gravitational’ – what do you mean by that?

As acknowledged by modern physics, the origin of everything, visible and invisible is vibrational – an oscillation, a sound. In String Theory, 11 dimensions are recognised, and we currently exist on a 3D plane and comprehend 4D as ordered by spacetime.

I think that if an oscillation is the essential creator of matter, then music – especially ritual music where specific frequencies and resonances are used repetitively (mantras for example) – has the power to heal, morph and dissolute matter as well as transcend gravitational forces.

Music can restructure your brain, help you project outside of a physical realm. Your body would not have weight any more – music can be anti-gravitational, like a magnetic levitator. I talk about that in ‘Time is The Illusion of Solidity’. I’m now trying to find and define the vibratory speed of the 11D. 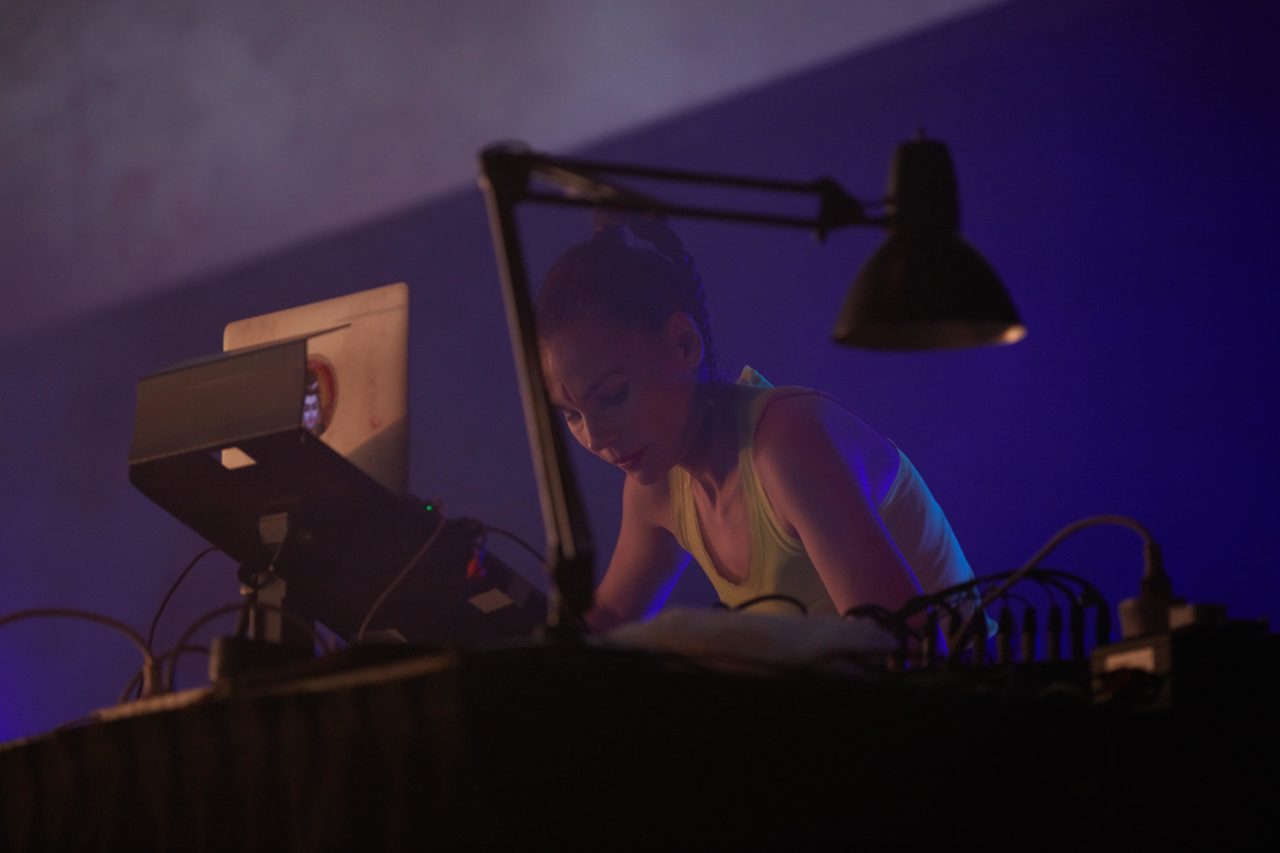 Especially in the current context, where our brains are getting used to sensory overload, and a need for constant refresh.

Yes, this system constantly stimulates you to consume and have brand new desires for any kind of possession. We live in a matter fetishising society. I’m sending out opposite subliminal messages via my music, inner power propaganda.

How do you negotiate being part of the music industry, which is inextricably linked with advertisement?

I don’t even feel like I belong to the music industry. I’m not aware of what people are working on around me because I don’t want my intention to be corrupted. I just go with my message. The only important thing for me is to gather people.

I like the idea of hijacking entertainment. I use a lot of film music production tools that are normally used to make people feel artificial emotions at the right moment when the hero is dying or something. I use these tools to initiate a trance. I’m also playing on extraordinary sound systems – I really enjoy sending out high-definition healing frequencies on them! I’m not in the capitalist logic, I’m a kind of shaman hacker.

Have you ever had strong reactions from your audience?

Yes, I receive powerful gifts, hand made art, stones… Sure, some people are resistant to my message – they would categorise this as spiritual, esoteric or occult. But to me capitalism is the occult, hiding knowledge, trafficking history, extending tyranny, plutocracy and Western supremacy. I offer an energetic and magnetic way to immunise ourselves and rise above the oppression.

Do you feel like you have to make any creative concessions?

I don’t feel any censorship. I think in this underground experimental electronic scene I’m a part of, we all feel very free. It’s a laboratory of ideas, where we can all experiment almost in real time.

My freedom and vision also occur because I program machines and the process between ideas and production has no interference. I can reproduce on my synth or plugins the exact sound I have in mind in a second, and modulate the sound to reach specific oscillations and binaural phenomena. These frequencies will impact your bones, your DNA, and your magnetic field. They will modify our state of consciousness, opening up higher dimensional perception and healing through resonance.

Shamans were always musicians, but I think that this society failed to produce modern ritual music with the exception of the actual electronic music scene.

I think the revolution will be frequencial and we could be these modern shamans.

DNA Feelings is out now on Houndstooth. 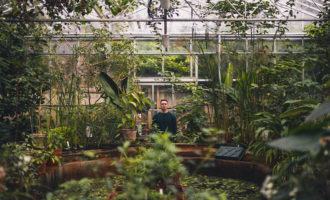 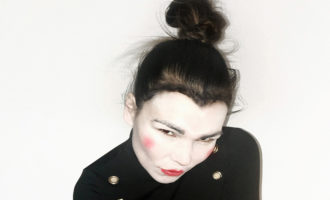