“Music is my salvation”: How Abu Hajar escaped Syria to make the year’s most prescient rap music

Civil war, prison and migration behind him, Syrian rapper Abu Hajar is finally able to tell his story.

It is a story that is true for a generation of Syrians, forced from their homeland by a bloody war and a repressive dictator to seek safety and some semblance of a future in Europe. Currently living in Berlin, the political activist and hip hop artist has found a new voice that tackles the most urgent themes through the prism of his own experience.

Where in Syria he was more interested in old-school hip hop, the perspective from Germany has opened his sound to oriental influences that explore Sufi roots as much as breakbeat. Most recently he has been working on an intercontinental collaboration with LA-based fade To Mind duo Nguzunguzu and contemporary Turkish artist Halil Altındere for an iconoclastic LA-meets-Middle Eastern hip hop cut, released on 12″ as part of the Berlin Biennale’s Anthem series.

But Hajar’s story begins far from the rarified world of Berlin’s artistic elite. Growing up in the port town of Tartus on the Syrian coast, Hajar was not immediately drawn to rap music. As a child he played the piano – a skill he now values but never imagined he would apply – before exposure to “conscious” hip hop changed his perspective. By the age of 14 he was already fraternising with the region’s most important voices.

Like any teenager growing up in a repressive political environment, exposure to state atrocities was never far away. Unlike others however, Hajar had personal reasons to be apprehensive. “The roots of my family are political and we had cases of political detention in the family that made my generation a bit scared of trying in that field,” he explains. However, when he was 18, Hajar encountered “honour crimes” for the first time – the ability to justify the murder of a family member for dishonouring that family – and was moved enough to write a song, which he recognises as the starting of his political life in Syria.

Immediately joining an opposition party, it wasn’t long until he was more deeply involved. “With the beginning of the revolution in Syria in March 2011, I left the party and joined the co-ordination committees that were working on organizing demonstrations and different other kind of civil resistance against the dictatorship.”

Over the next year, Hajar felt the force of President Assad’s repressive tactics, imprisoned several times for different reasons, before his longest spell behind bars the following March proved a turning point in his life. On the morning of 14th of March 2012, Hajar and two other friends – one of whom played in his band Mazzaj – were stopped by armed men and accused of “illegal unauthorised political activism”.

“They said it would take five minutes to ask some questions,” Hajar remembers. “That lasted for almost two months.” He describes how there was a fifty-fifty chance of leaving prison alive, how torture was a distinct reality and how he lived surrounded by death and trauma. “People around me were collapsing and fainting seeing faces that were covered in blood,” he says. “I’m still getting nightmares about being there.”

Behind bars, it was music that kept him sane. “Music is my salvation,” he says unequivocally. “My first night in jail could have been way worse if I had not spent it writing lyrics of my song (‘We Fed Up’).”

It represented both a valve through which he could vent his frustrations and a reminder that there is always hope. “On one level it is to discharge all the rage you get on a daily basis from living in a society full of prejudices, consumption values, and a highly concentrated means of control, and on the other hand it is the beauty that people will understand you whatever you do.”

Released conditionally, it was only a month until they came for Hajar again. Not prepared to relive the experience, he decided to flee, jumping the garden wall and moving from safehouse to safehouse before escaping across the border to Jordan.

Given the horror of his experience, it seems absurd to say it, but Hajar may have been one of the lucky ones. Fleeing the conflict as early as 2012 meant he was met with less resistance than those who are only now making the desperate journey. An educated young man, he decided to apply for a masters degree in political economy from a university in Italy with the belief that by the time he graduated the Assad regime would have been removed and he would be free to return home.

But with the war still raging, he was forced to seek a more permanent solution, and settled for Berlin, a city he’d visited previously and “could provide a good atmosphere until we make it back.” 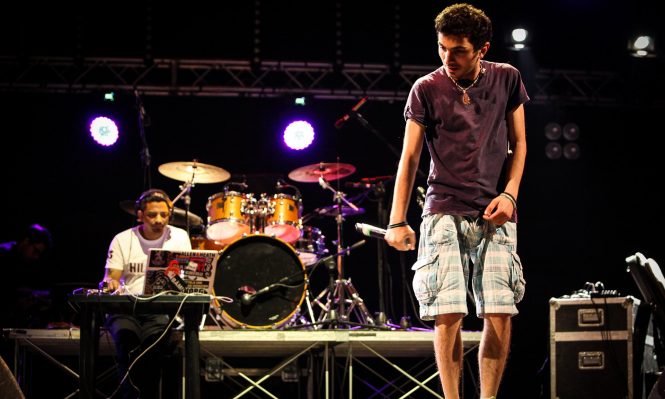 As well as offering Hajar a more stable home, Berlin has had a noticeable impact on his creativity. “Berlin is trying hence you can try in Berlin,” he says, coining a new motto for the city. What that means for Hajar though is a sense of co-existent industry and experience that changed his perspective on making art. “Berlin is a place where you meet musicians from all over the world, weird different genres and types of music that you can not even label.”

As a result, Hajar dropped the insistence on old school hip hop in favour of what he calls “mixing rap with Sufi music, break beats, downtempo or oriental rhythms” and a confidence in both using and challenging the sonic traditions of the Middle East. “The music scene in Berlin is so competitive and so mature at the same time, that it changed almost everything about how I produce music.”

It’s a change that he recognises in two songs, the first called ‘Cuddle the Jasmine’ from 2008, and the follow-up ‘Cuddle The Vacancy’, written in 2012. The former was penned on Hajar’s first trip abroad, and is something of a homage to the country, referring to Syria as a lover, “full of nostalgia for the sea, mountains, culture and even the hard times.” The second he wrote after being in prison, where the nostalgia has disappeared and been replaced by a sense of bitterness and heartbreak, a relationship where “I can not love you if it is not my own way.”

With the terms of his relationship with his homeland now very different, Hajar has sought to find a new way to articulate his identity. One such opportunity was afforded by a collaboration with Turkish artist Halil Altindere, who contacted Hajar to enquire about making a video for one of his tracks. If leaving Syria and working in Berlin has opened his creative potential, so has coming to terms with his status as a liberal, educated “refugee” been an ongoing process, and one which until now he has been unwilling to broach in his music.

“The topic about asylum and being a refugee which I have been trying to neglect since I left Syria was becoming an urgent pressure,” he says. “[It was] crossing my lyrics and my mind daily, so I decided to write about that for the first time.”

Working with Altindere and LA duo Nguzunguzu, Hajar has crafted one of the most urgent and powerful pieces of music yet, the first to be pressed to vinyl, this time as part of the Berlin Biennale’s Anthem series, curated by US-based producer Total Freedom. It’s a context which could jar with the content of the music, if it wasn’t delivered with such verve. With ‘Homeland’, the track’s direct title, it’s a fight Hajar is happy to confront head on.

“I always refused the Western use of the term ‘Refugees’. It comes with a lot of pity and pity is not what I am looking for. I was more looking for solidarity. So in this song, I tried to connect the tracks somehow between my status now as a refugee and my previous life as a Syrian activist for freedom.”

It is a story that urgently needs to be heard if Europe is to first humanise and then understand the root causes of forced migration from Syria. “I tried to explain that our lives as refugees did not start the moment we left Turkey on a boat but earlier, under a dictatorship that has sought only to create wars and refugees.”

Whether or not the music can have any active impact on the conflict is moot, and Hajar is aware that his role currently as artist serves a different to to that which he pursued organising demonstrations in Syria. “Music has more effect on the future by being the record of the collective memory,” he explains. “Now the voices of the gun powder are louder than the piano.”

Abu Hajar, Halil Altindere & Nguzunguzu’s ‘Homeland’ for the Anthem series is released by The Vinyl Factory and Berlin Biennale in collaboration with DIS Magazine. It is out now on 12″ vinyl and available to buy from The Vinyl Factory online shop.