“About 3,000 records were soaked”: What happens when your record collection goes under in a flood 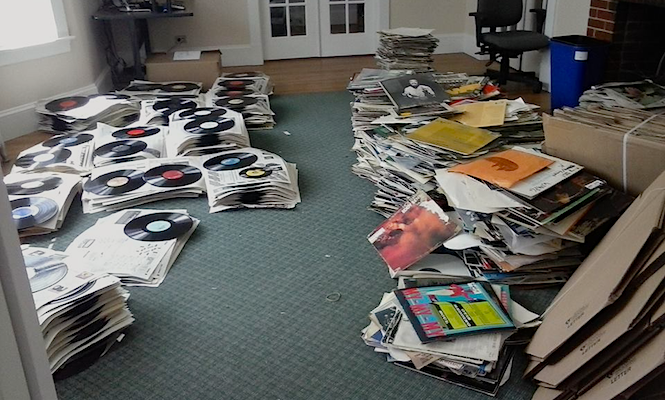 Water, water everywhere and not an Expedit in site.

It’s every record collector’s worst nightmare. Along with the terror of a house fire, the proverbial torment of which has spawned perhaps one of the most axiomatic record collector conundrums of all time, there’s something particularly gruelling about watching your records get swept away by unfeeling torrents of water, sticking covers to liner notes to records, and rendering the whole lot a gluey, pulpy mess.

Sadly, it’s a fate that befell US community radio station WMPG last week, when the volunteer-run outfit discovered a burst pipe had drenched over 3,000 records from their vast music library, and gutted the core of their blues collection. Desperate to save the rare LPs and irreplaceable field recordings, the station put out a call for help and volunteers flocked to their aid, as they did when Norton Records warehouse was wiped out by Hurricane Sandy.

With the clean up (and dry out) well and truly under way, we contacted the station and asked them to talk us through the disaster, and how they plan to rescue what’s remaining. Dale Robin Goodman picks up the story.

So let’s start at the top – could you describe the WMPG collection to those who don’t know it?
​
WMPG, broadcasting since 1973, is a Community Radio station, affiliated with the University of Southern Maine, but operated independently within the university community. ​Run by volunteers and students, with a team of three professional managers to keep the operations running smoothly. The section of the library that was most affected was the blues. WMPG has a strong commitment to the blues, with blues programming 6 days a week from 5 to 7 pm. A different volunteer host each day, with a different focus on the blues. Plus other programs throughout the week that include various aspects of blues in the mix of music.

Because the collection was begun so long ago, there are some rare and irreplaceable treasures of blues… source and field recordings, as well as popular blues of those early years of WMPG. In addition, we regularly receive donations from people looking to clear out their old record collections, or the families of music lovers who have passed. There are some amazing and unlikely recordings in the vinyl library.

What happened in the flood and when did you realise the collection was in danger?

​WMPG is located in an old house on the university campus. Studios, offices and much of the CD library are on the first floor; additional office space and a large section of the CD collection, along with our entire vinyl collection is located in the basement area. The student newspaper is located on the second floor of the house.

At some time in the Wednesday-Thursday (April 22-23) overnight, there was a burst pipe in the basement, and water ​began pouring into the basement. There are volunteers making radio in the building 24 hours per day, but the problem went unnoticed on the main floor of the house.

When station manager Jim Rand arrived Thursday morning, he received a message indicating a problem with the water pressure. University officials responded quickly, shut off the water, removed any standing water and made initial repairs, but the damage to the library had already happened. A section of our vinyl library, about 3,000 LPs, was soaked. It’s a horror story for every collector, what was your reaction to the incident?​

Jim put the call out via our email lists and Facebook page, and students and volunteers arrived to help take the vinyl out of ​th​​e jackets and covers​. The student newspaper provided stacks of back copies of the paper, and ​the records were stacked between sheets of paper to dry out. The vinyl was in not-too bad shape, and was already drying out once removed from the soaked paper and cardboard covers.

Fortunately, the house next door to WMPG is currently vacant, and the university allowed access to us so we have a large space to spread out the records. De-humidifiers and fans were set up to help dry things out. That’s where things still stand right now.

​The area of the library where this happened is still drying out, and needs additional attention from University facilities management. We are concerned about the development of mold and the long term viability of this area.​ We’re so thankful to the the University of Southern Maine for their ongoing concern for the building.

As far as the records go, we are going to order blank replacement covers for storing the dried out vinyl. The cover notes and art are mostly ruined and will have to be discarded. We have had a couple of offers from professional photographers to capture the ruined cover art and help us create new makeshift cover notes and art. It’s going to be a lot of work over time. Has the whole thing changed the way you think about the collection and what it means to the station?

​Many of our volunteers have always cherished the vinyl section of the library, and often find treasures to play on the air. We talk about the vinyl a lot, and we know that ​the collection is rare and precious. There are two turntables in each of the studios.

This disaster attracted a lot of attention from media in Maine. Print, TV and radio…. the press was here on Thursday and Friday covering this. The response from the public has been a surprise. We’ve received phone calls, suggestions, donations, expressions of concern and offers of help.

​The attention to this mis-hap has shown us that people care deeply about the music we play on the air.

WMPG is a grass roots radio station, ​with a very strong and personal relationship with the community. Our listeners love us, support us and care about what happens here. This incident has reminded us how important community radio is to the people we serve. And how kind, concerned and generous people can be.

Has disaster ever struck in your record collection? We want to hear from you. Email your stories to hello@thevinylfactory.com.