“A punk move”: Electronic music duo The Golden Filter on fighting the industry, staying mysterious and why they’re releasing Unselected Works on their own terms 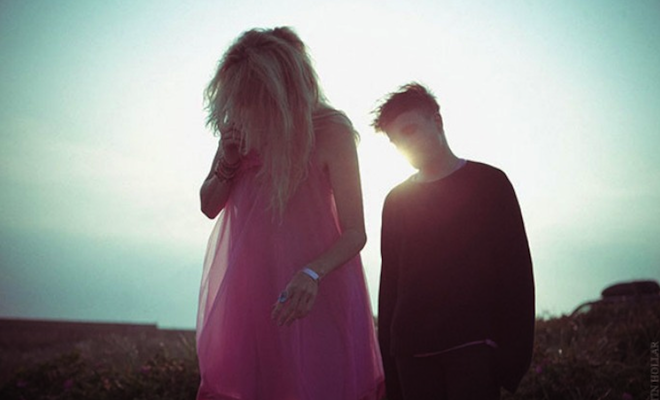 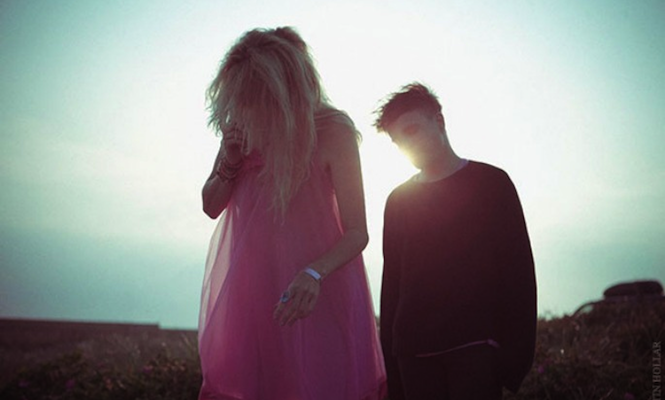 We catch up with NYC duo The Golden Filter ahead of their trilogy of limited edition vinyl releases with The Vinyl Factory.

There’s a quiet satisfaction in the voices of Penelope Trappes and Stephen Hindman when they explain just how they came to leak a whole album of previously unheard ‘sketches’ and demo recordings online on Christmas Day last year. Had we been talking face to face rather than on the phone from their home studio in New York, I imagine the pair trying to suppress a cheeky, conspiratorial smile, like the good kid whose broken the rules for the first time and kinda likes the feeling. Stephen may describe it tentatively as ‘a little bit of a punk move’, but there’s more charm than chagrin in his expression, for The Golden Filter are the most accidental of anarchists.

“Liberating”, “positive” and even “cathartic”; you only have to listen to the language Penelope uses to hear how pleased the pair are that they’ve side-stepped the mounting delays of their new LP to release Unselected Works, a trio of albums taken from countless sessions over the last 18 months, posted one by one online since Christmas Day 2013, and now being pressed to limited edition vinyl by The Vinyl Factory.

A brave act of positive defiance, Unselected Works sees The Golden Filter continue to explore the limits of their medium, challenging the very notion of a finished album in the same way their 2012 collaboration with The Vinyl Factory Syndromes deconstructed what it means to compose a soundtrack for a film that hadn’t been made yet.

In readying the slightly-more-official release of all three volumes of Unselected Works on vinyl, we caught up with Penelope and Stephen to find out what we can expect and just why they struck out alone.

It’s been a good four years since your debut Voluspa was released and already three since Syndromes. Let’s chase the elephant our of the room straight away; where have you been all this time?

Penelope Trappes: We’ve actually been really busy in the studio and I would say the trilogy attests to that.

Stephen Hindman: Basically, we’ve been recording and we’ve been writing, and we have millions of songs it seems like – that might be a bit of an exaggeration. And we’re sort of waiting for our proper full length to come out – and so we’re not sounding weird – we still don’t know if that is ever coming out. So we got a bit frustrated and just decided to leak out a whole ton of music.

Penelope: So that was on Christmas Day, basically very much – as cheesy as it might sound – as a genuine gift to our fans who were like “when’s the album coming out?” And because there were roadblocks here and there for whatever reason, we just did it. And at the same time as doing that we were very much like “this would be great on The Vinyl Factory as a trilogy box set”! 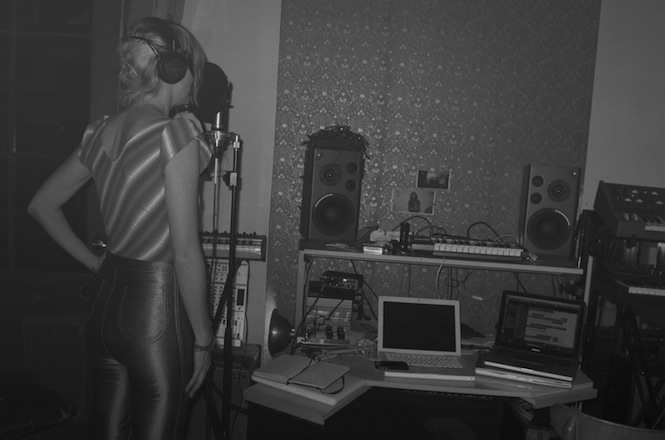 So it moved from being an illicit act to something slightly more official?

Stephen: It was a little bit of a punk move, it’s like we were trying to just get things out in the way that lots of people do when they get a bit frustrated, leaking their albums to the world before they’re out. But we had a lot of extra tracks so we didn’t have to give out whatever that album is.

Was it a spontaneous decision made in a fit of frustration?

It’s a very generous form of frustration. In the message that accompanied the release, you talk about it being outside the ‘machine’. Was the ‘machine’ the industry that you were frustrated with?

Penelope: Let’s just say, yeah. Let’s not pussyfoot on this one.

Stephen: You know, it’s not like we have anybody that we don’t like in the industry, but maybe it’s a little bit of the fact that there’s no spontaneity in the industry at all. Everything is planned out like 6 months ahead of time, and so it the anti-industry thing is just to release it when you have an idea, within one day. When you have an idea you should be able to do it.

Is that then partly the thinking behind calling them ‘unselected’ works? It’s an interesting choice of title.

Stephen: Yeah, well they were tracks that were ‘unselected’ by us and the people we were working with on the record.

Penelope: It’s definitely like a spin-off of the freedom factor, that these were ‘unselected works’ didn’t mean that they were bad tracks or anything, they were just things that didn’t make it into the official bucket for the industry. And we still love them a lot.

Stephen: In fact, I think we’ve grown to like these more.

And they’re basically things you’ve been recording in the past 18 months?

Stephen: Yeah. We have our own studio and we self-produce, self-write, self-kind of everything, with no help from the industry anyway.

Penelope: And it’s great that way. Whenever the inspiration strikes.

Here I suppose you end up having to play the role of producer or curator too by choosing which tracks go into which ‘Unselected’ volume?

Penelope: Yeah, it’s very much a curation, deciding each track, because Volume Three is a lot different to One in the sense that it veers more into more upbeat, dancier tracks.

It does seem like it moves from something more introverted in Volume One which by the time you released Volume Three online a few months later is more extrovert or dancefloor orientated.

Penelope: Yeah, that’s a good way of putting it. Maybe we’ve found a certain element of confidence in the whole process so by Volume Three, we were jumping up and down in our minds.

Is there anything that particularly defines each one for you?

Stephen: We did intend to have them seem like a set, and in a lot of ways, because it’s us two doing the music, it just comes out sort of sounding like us anyway. There was a lot of experimentation during the last couple of years and after the first album and after our soundtrack EP it’s like you just kind of want to see where you can take the project.

Penelope: Volume One I would say was more like a soundtrack, it’s about this freedom of our thought processes about what is The Golden Filter and what we want to get off our chests. And then Two flows like the bridge between One and Three, and Three was a little bit back to the roots, with a 4/4 beat, some of the original ideas that we had when we first started The Golden Filter.

Does the fact that these tracks have now been ‘selected’ change their nature in any way?

Stephen: I suppose it does in theory, it’s a little bit meta to call it ‘Unselected’ when we’ve selected them.

Penelope: We started having this thought one night over a glass of wine that this whole concept of ‘Unselected Works’, it doesn’t just pertain to us, it really does pertain to everybody who writes and that this could be endless, it could be up to volume – name your number – and it doesn’t have to be The Golden Filter, it’s a community of musicians who have this dilemma and have an album that they really wished had made the grade. We’re really into that idea of essentially creating a family for unselected works.

You mention how Volume Three reflects more of the original ideas you had when The Golden Filter first started. Has your approach to making music changed or developed over the past few years?

Stephen: I don’t feel like we’ve ever really had too much, it’s never been too much of anything to restrict us. It’s weird because obviously the part of this conversation that we’re not revealing everything about is what exactly did happen to our album…

Penelope: We have a history of being mysterious, so… 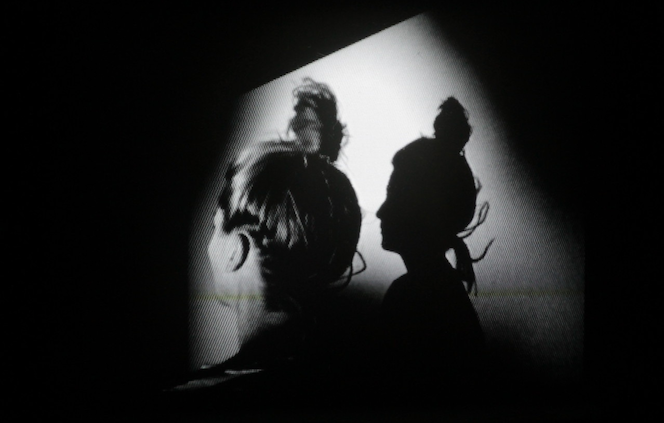 OK well, let’s just leave that lying then and get back to the music. It feels like there are a lot of different influences from all over the world in these tracks, particularly in the tablas and eastern percussion than run through them.

Penelope: Yeah, we didn’t explore that so much in our first album Voluspa, but previous to meeting Stephen and working together I travelled a lot throughout Asia, I lived in the Middle East for just under a year and I haven’t in my home country Australia for a long time, so global elements have always been there but perhaps in the first album it wasn’t as obvious.

And is that something that is reflected in your personal tastes?

Penelope: Yeah, definitely and just not even what I listen to, but how I feel, so it can’t help but sometimes slip into some sort of Arabic scale.

Syndromes was such a strong, concept-led project, but this feels more spontaneous, and has gone in the other direction. Finally, what can we expect next? You’ve got this album on the shelf… Is that any closer to seeing the light of day?

Stephen: I think what we may just do, because as we said in our little statement these things are out of our control, we’re going to continue to do things. I think we’ll probably release dance music to put it in loose terms and come up with a bit of a concept there of releasing a series of 12” disco records.

We do love disco and we love dance music. The album shouldn’t just be a bunch of disco songs, we feel like there should be something else, and we’ll leave that to the 12”s and go back to 1983 and release extended dance mixes of really cool songs and with very strong visuals. And I think that’s where things are going for now until the album stops eluding us.

Penelope: And just continue down the freedom path.

Unselected Works Volumes I, II and III are limited to 200 copies each and will be released on 4th July with The Vinyl Factory.

Another record shop, Yam Records, set to open in London 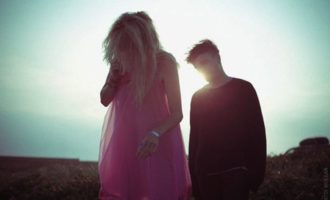 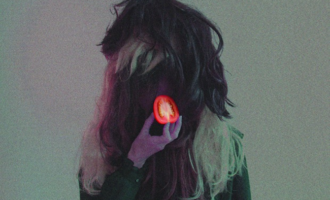 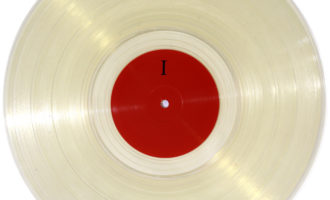 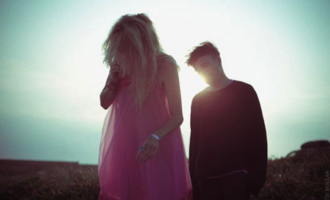