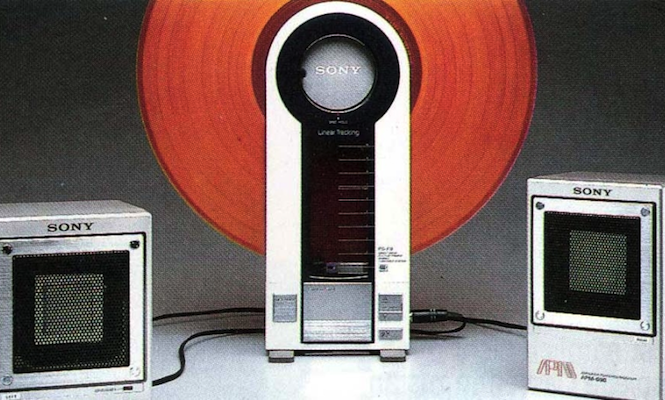 Well, look, we’re not talking the ultimate in sound quality here. When it comes down to it, if you wanted to build a turntable of audiophile quality and you were brainstorming ideas with a bunch of colleagues around a table and one chap suggested, “I’ve got it! Vertical turntables! We’ll tip the entire record on its side!” The boss might come back with something like, “Bob? How’s your garden doing these days? Why don’t you spend more time trimming your roses? Let’s me ring a taxi for you…”

The notion that gravity is pulling either on the arm (although there are ‘solutions’ to that one, as you’ll see below) but, more importantly, on the record itself as it swings up against this natural force, is a tremendous negative before you’ve even lifted a finger to design your deck to address the other 10,000 other issues that this configuration creates.

A turntable is a delicate and precise piece of engineering, it seems obvious that positioning the record in a vertical manner would be problematic and yet some manufacturers did exactly that. What possessed them? Well, you’ve got to put yourself in their shoes at that time. With the first flush of vinyl fever, there were many turntables out there and vertical mounting was just one way to stand out from the crowd. It’s intriguing that, with vinyl popularity now back on the table, we are once again seeing manufacturers address this design option.

Should you buy one? For sound quality reasons? Probably not. If sound quality is not your priority, then sure, why not? Some of the older, original models can be bought for not very much money. Many of the older models still work while the new models have the advantage of new construction materials giving some of them an attractively aesthetic quality. Finally, vertical turntables are just plain fun and a great talking point at parties. In a change for many designs of this type, the Technics linear tracking system was run via a direct drive, quartz-locked system and was relatively light, being half the weight of the typical Mitsubishi model, below. It ran both 33.33 and 45rpm discs.

This two-speed, belt-drive, fully automatic turntable with parallel tracking tonearm was also available with a built in tuner/amplifier. You could also fine tune the speed options using rotary wheels. Released around 1983, the sound is, well, ‘ok’, let’s say that. In general terms, the relatively new ION has been included here to show what to avoid. An excellent example of bandwagon jumping without any sense of design or planning, I can only imagine that the budget for this turntable project was somewhere around a fiver. Featuring a built-in speaker, the sound quality is very poor, speed stability is highly questionable, the arm skips grooves like Evel Knieval (ask your dad) and the volume is as loud as a monk with a mouth full of Spam. Normally, I wouldn’t touch Lord Sugar’s Amstrad with a sonic barge pole but this category of turntable is not sound quality-centric so the SM104 makes it into the list. It not only came with a pair of speakers but also a radio, twin cassette player, equaliser and remote control. Oh Alan, you dawg.

Released in 1980, the 3000 used ‘AutoDisc’ technology marketed by Sharp with the phrase “Play Both Sides” adorned on the chassis. Hence, you could play the A-side and B-side automatically without turning the record over. It arrived with a FM/AM radio tuner, cassette recorder and speakers. This new design, includes full-range stereo speakers (with external options connectable via a RCA line out) powered by an internal 15W amplifier (which, it has to be said, is a truly terrible idea), with a volume knob situated on the maple or walnut-veneered base. The belt-driven system runs at 33.33 or 45rpm. A record clamp fixes the record to the machine while the deck features an good quality Audio Technica AT95E cartridge and an acrylic platter. You also get a built-in headphone socket. First sold in 1983, this compact unit was a portable affair and, thus, powered by batteries or an external power supply. It was possible to play 7″ or 12″ records at 45 or 33.3 RPM with a linear tracking direct drive. It also came with dual headphone sockets and a record clamping system. Half decent sound quality. Another new product. Using a linear tracking system, this compact unit uses LED touch buttons and a remote control. With the Standing Record Player, you are also able to play warped records too due, reportedly, to its spherical bearings. Supporting 7″, 10″ and 12″ vinyl records, the unit comes with a built-in carbon fibre brush that captures dust to keep the stylus clean. It has an outer shell made of walnut wood plus two featured USB ports to allow PC, smartphone or a flash drive to capture music while it is playing. We await more information regarding its final release along with a price.